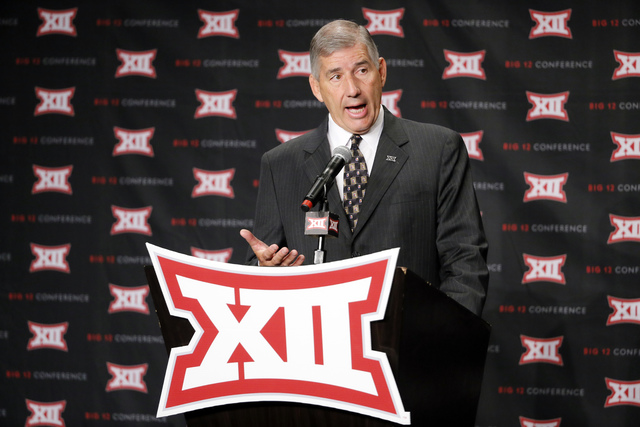 In this July 18, 2016, file photo, Big 12 commissioner Bob Bowlsby addresses attendees during Big 12 media day in Dallas. The Big 12 board of directors meets Monday, Oct. 17, 2016, in Dallas and the topic of expansion will be addressed. Not necessarily decided, but definitely addressed. (Tony Gutierrez, File/AP) 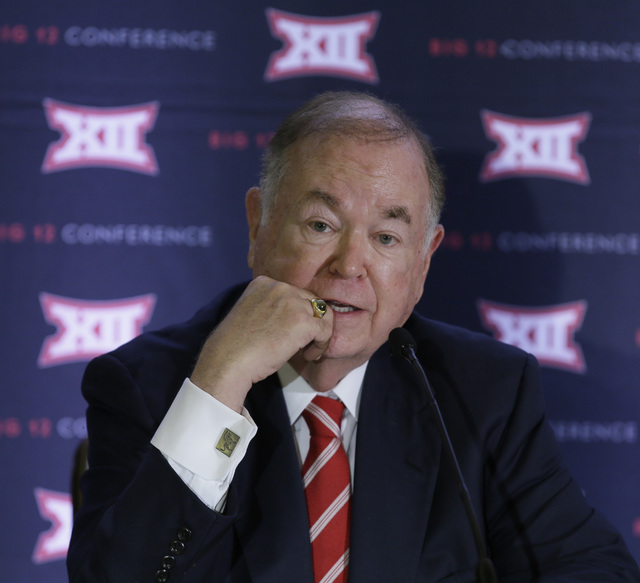 In this June 2, 2016, file photo, University of Oklahoma President David Boren speak to reporters after the second day of the Big 12 sports conference meetings in Irving, Texas. The Big 12 board of directors meets Monday, Oct. 17, 2016, in Dallas and the topic of expansion will be addressed. Not necessarily decided, but definitely addressed. (AP Photo/LM Otero, File)

DALLAS — The Big 12 Conference has decided against expansion from its current 10 members, according to two people familiar briefed on the decision.

The two people spoke to the AP on condition of anonymity because the Big 12 was expected to make a formal announcement later Monday and had asked the schools involved not to speak publicly.

The decision came after a six-hour meeting with university presidents and Commissioner Bob Bowlsby, who called the schools that had hoped to be added to inform them of the decision. One of the people told AP the board’s decision was unanimous.

The Big 12 has been analyzing expansion options for the last three months, but it never made a commitment to expansion.

The Big 12 has been tossing around the idea for almost two years as it tries to find ways to increase revenue and improve the conference’s chances to make the College Football Playoff. The Big 12 was left out of the first CFP in 2014, but conference champion Oklahoma made the playoff last season.

Oklahoma President David Boren has said the Big 12 was “psychologically disadvantaged” by being the smallest Power Five league and the only one without a football championship game.

This past offseason, expansion talk got fired up again. The Big 12 announced it was bringing back its football championship game in 2017, no matter what its composition. But with only 10 teams, a title game is not a natural fit for member schools that play a round-robin schedule.

In June, the conference announced record payouts to members of $30 million each, and expansion talk again seemed to fade.

A month later, school presidents were briefed by consultants who explained how the conference could increase its playoff chances by adding schools and increasing its revenue. The Big 12’s TV contracts call for ESPN and Fox to increase their payouts to the conference so that any new member would be making what the current members are making, which is about $25 million.

It was after that last board meeting that the Big 12 announced its presidents had given Bowlsby the go-ahead to do a deep look at expansion and possible candidates. Boren and Bowlsby said the conference would consider adding two or four new members. Or none.

Two new members would have meant an extra $50 million in TV revenue per season for the Big 12 on contracts that run through 2025. Current members would share the majority of that money at first; TCU and West Virginia joined the Big 12 in 2012, but they did not receive full revenue shares until this year.

The networks have not been keen on the idea of paying the Big 12 to add schools.

“We don’t think expansion in the Big 12 is a good idea for the conference. We think it will be dilutive to the product in the short term. In the long term, it’s probably harmful to the future of the conference,” Fox Sports President Eric Shanks said earlier this month at Sports Media and Technology conference, according to the Sports Business Journal.