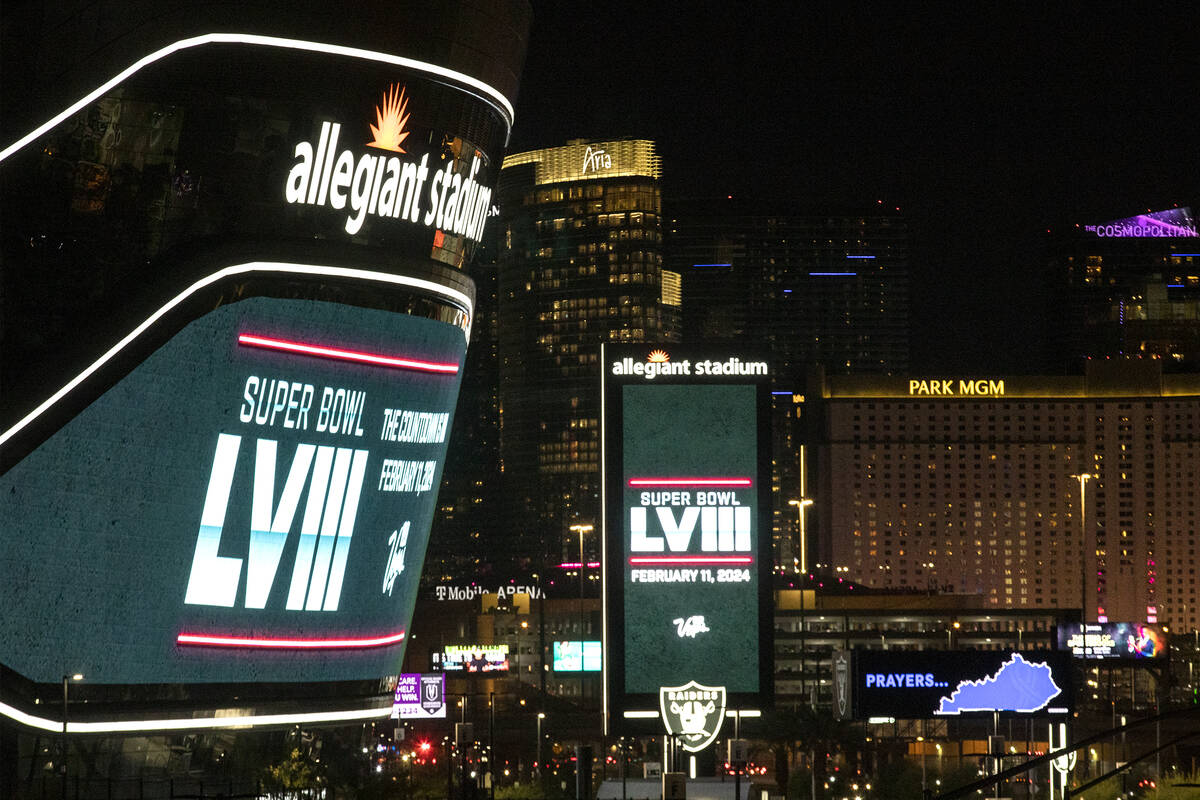 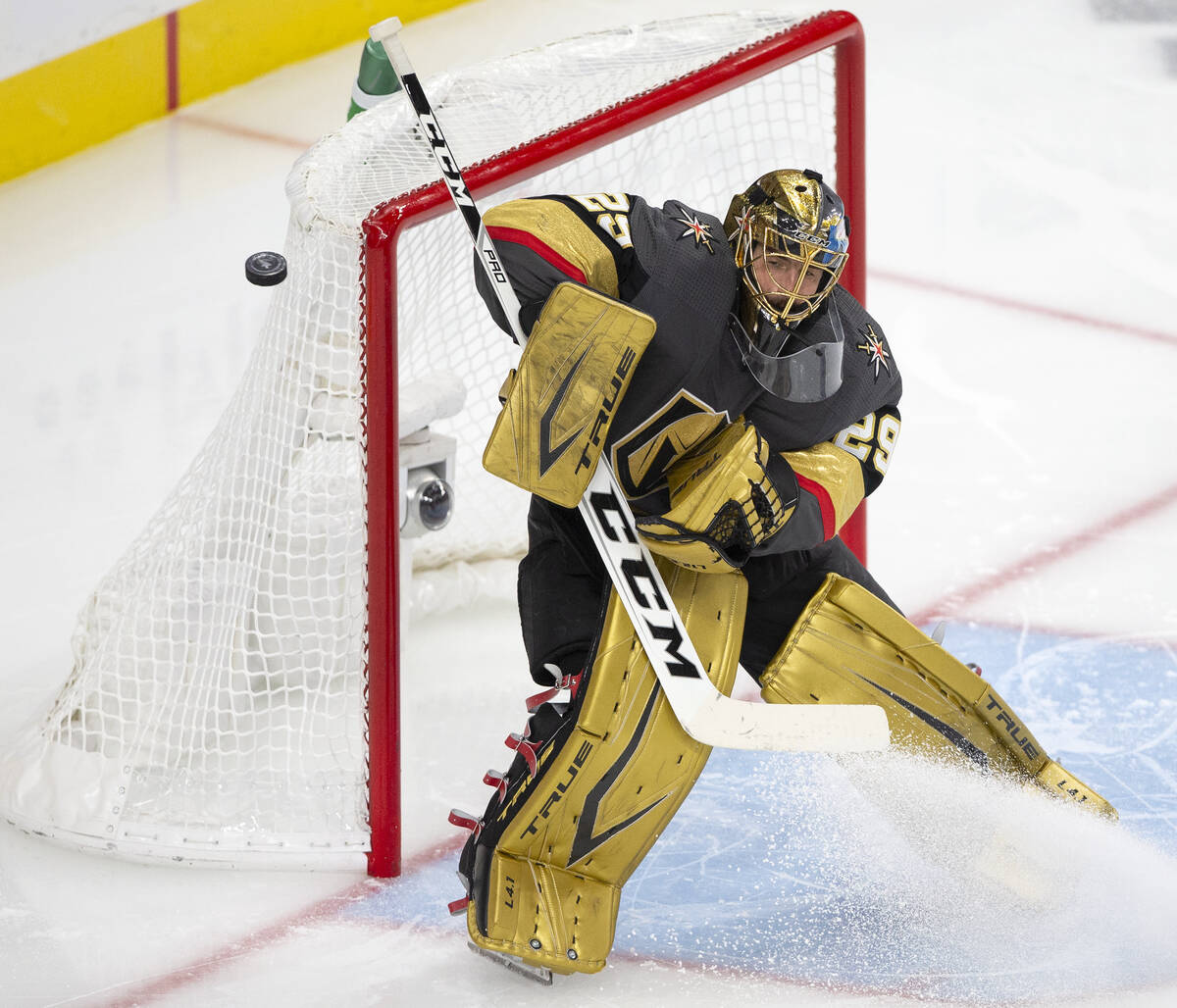 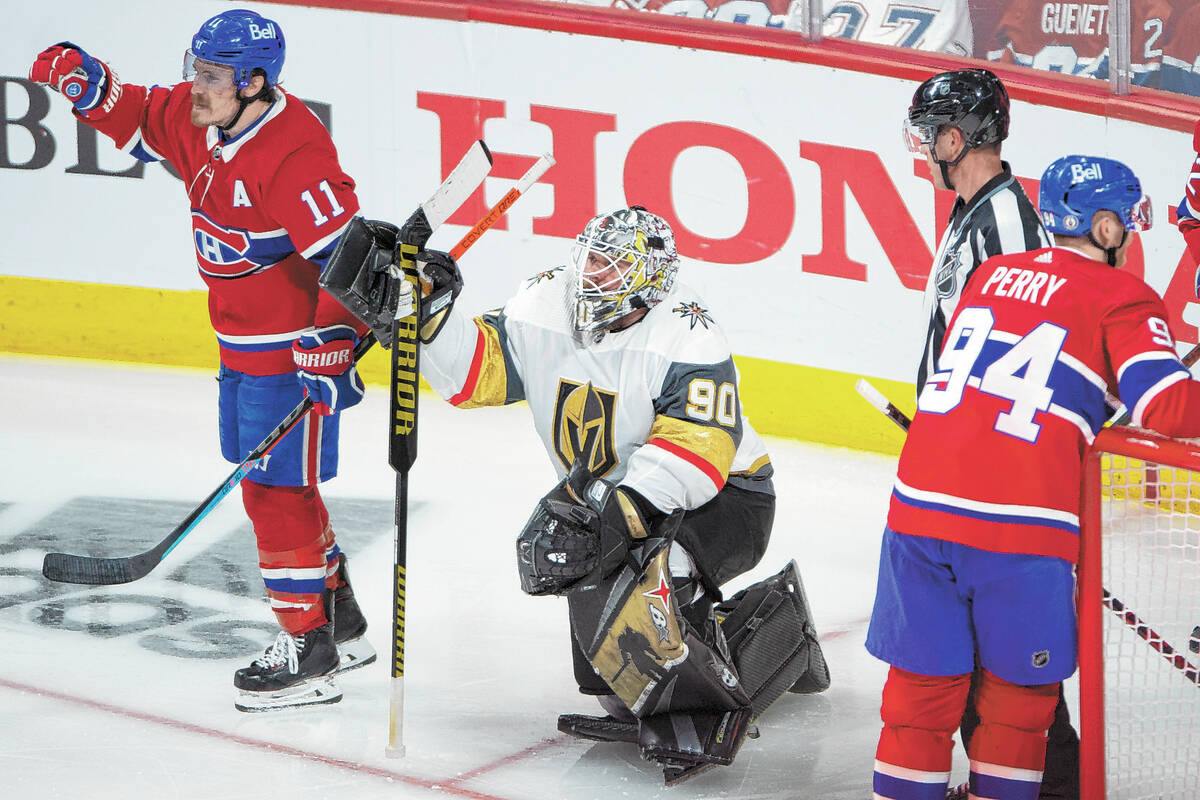 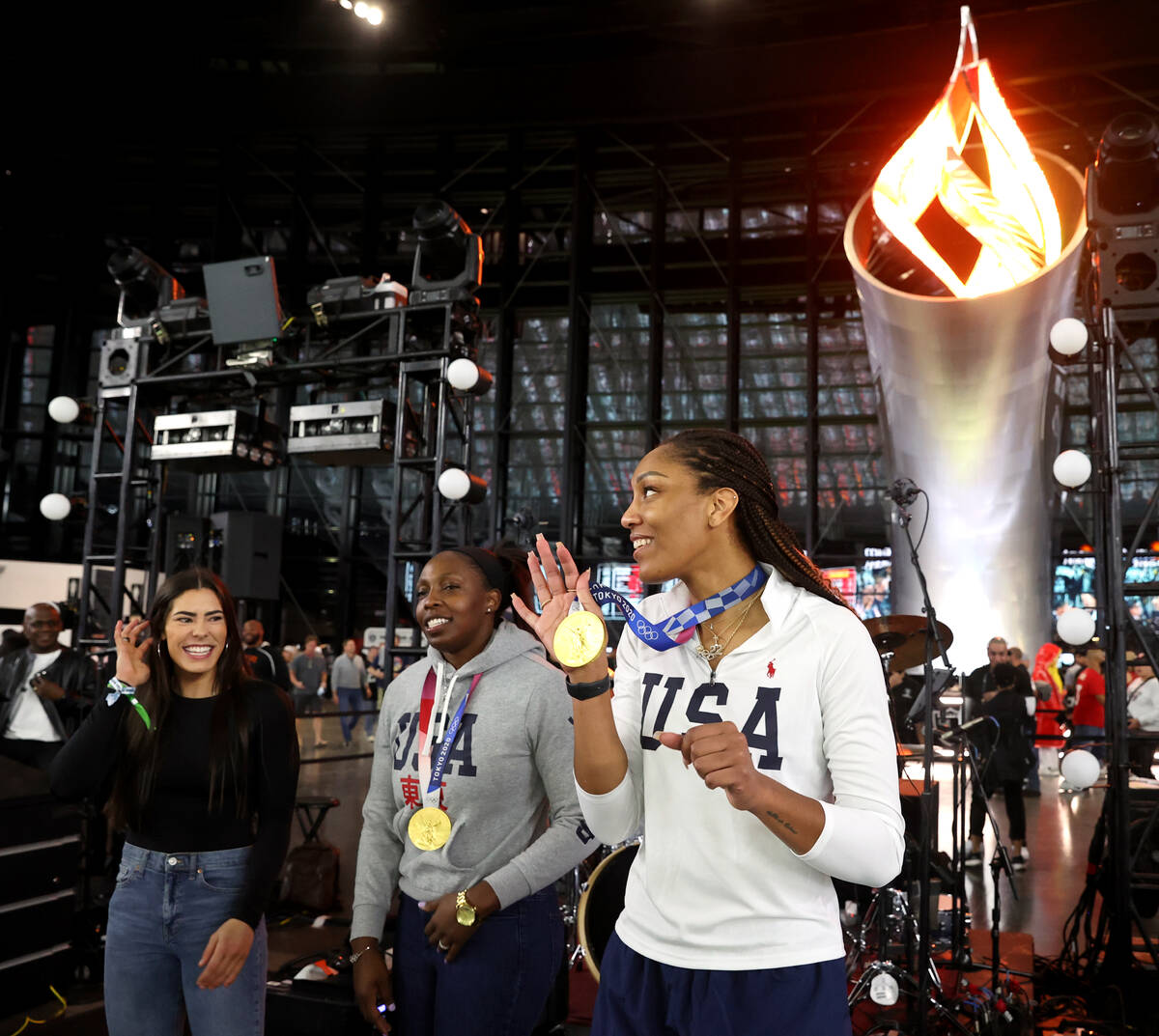 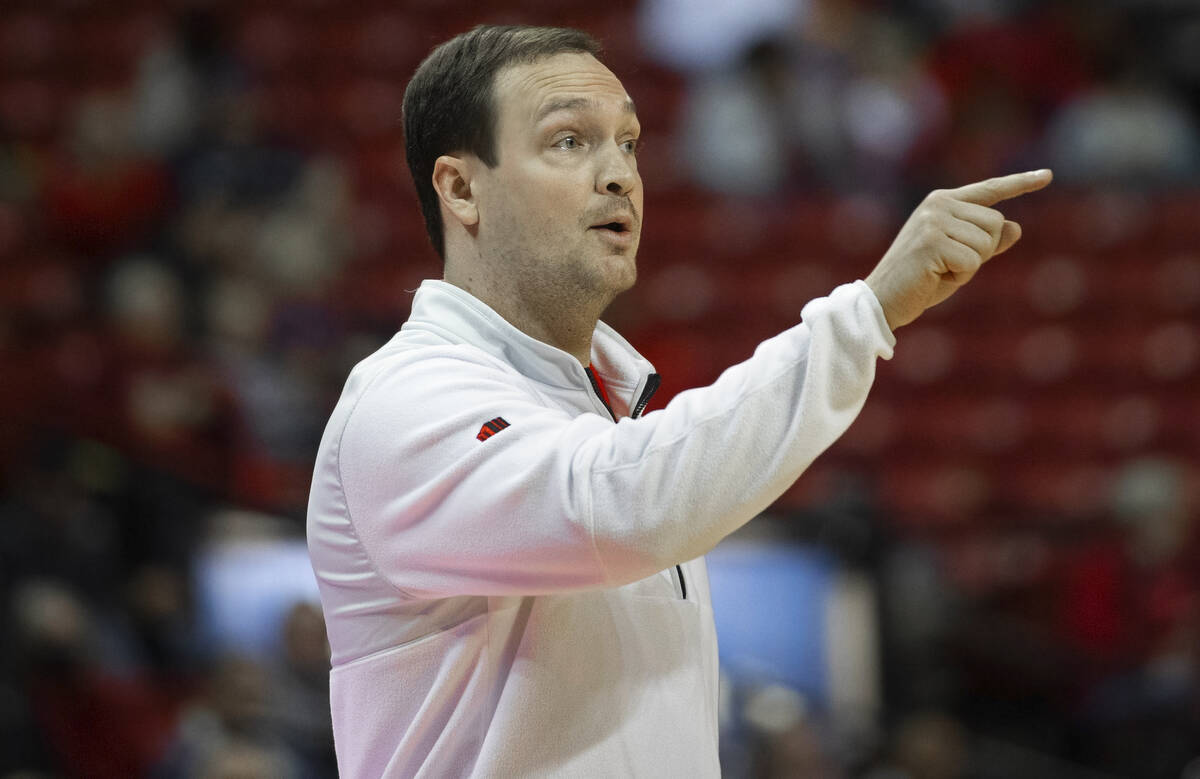 UNLV Rebels head coach Kevin Kruger makes a call in the second half of an NCAA mens basketball game against the Omaha Mavericks on Wednesday, Dec. 15, 2021, at the Thomas & Mack Center, in Las Vegas. (Benjamin Hager/Las Vegas Review-Journal) @benjaminhphoto 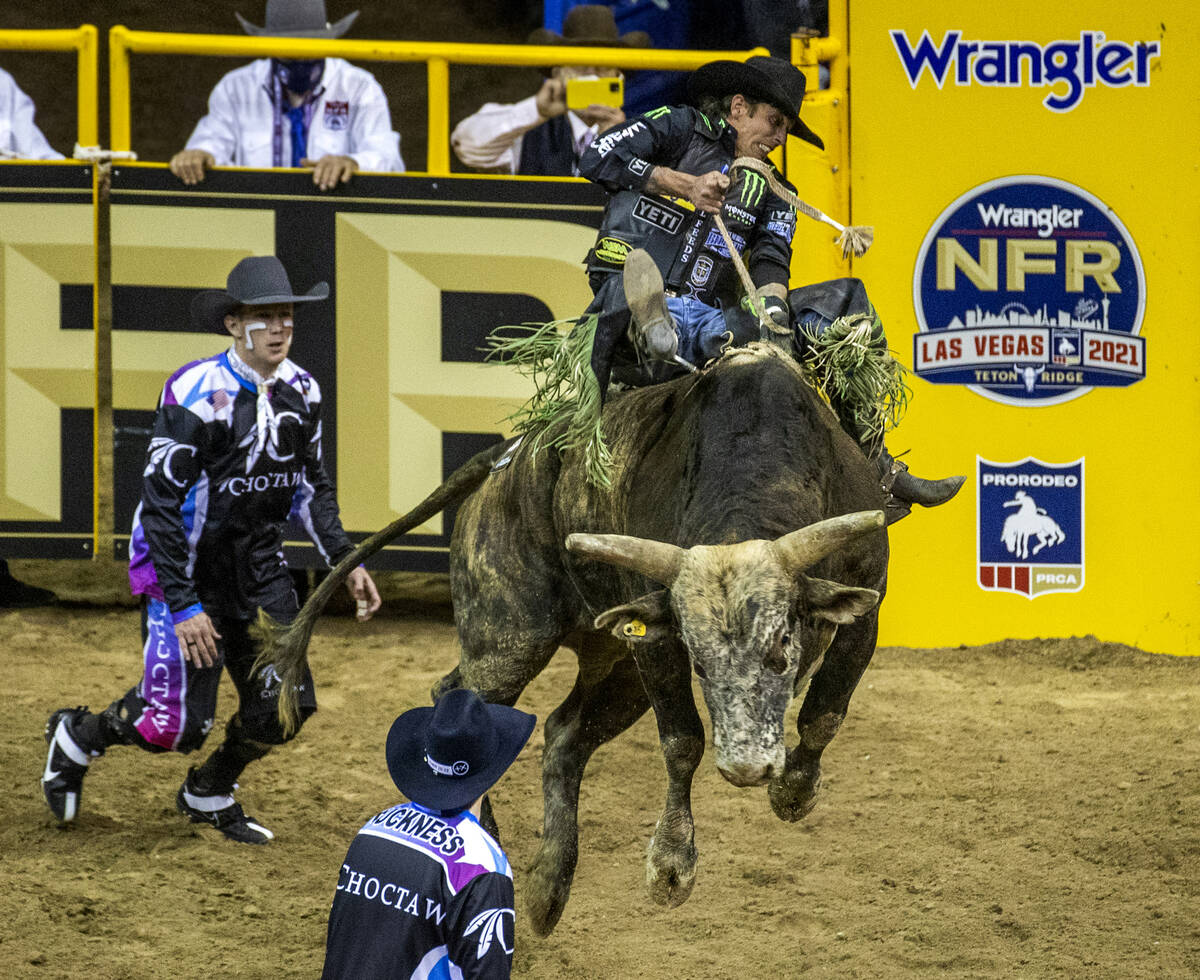 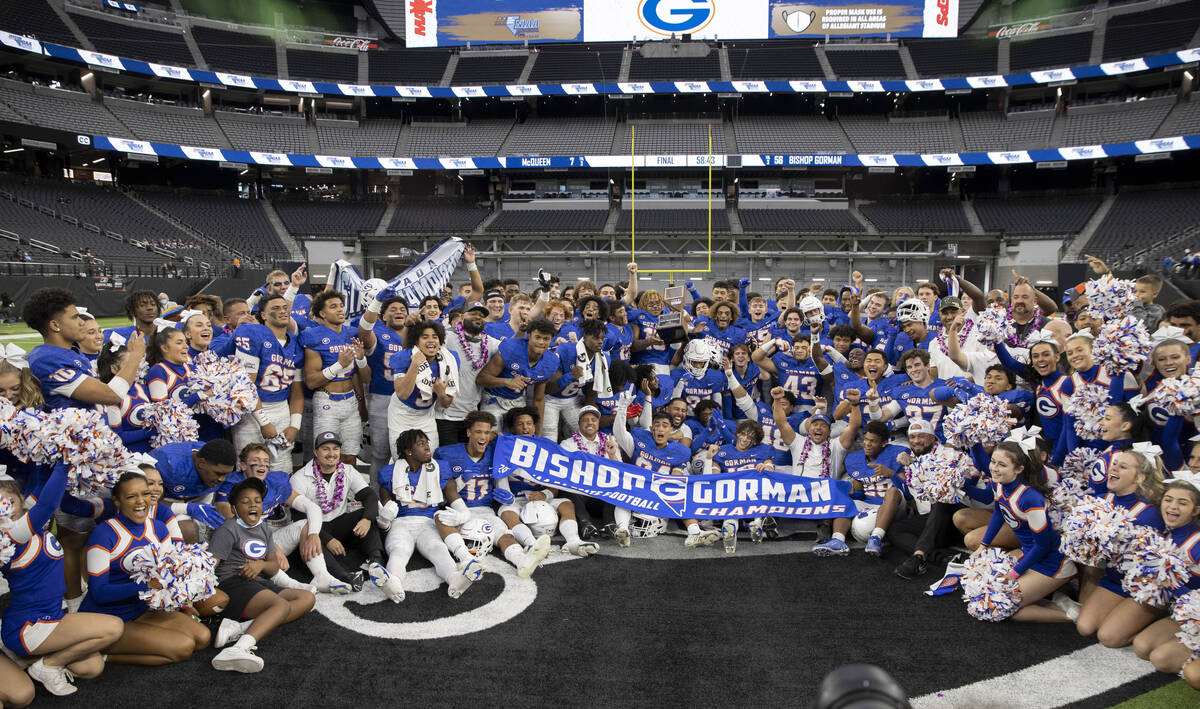 Bishop Gorman players, coaches and others come together on the field after beating McQueen in their Class 5A football state championship game at Allegiant Stadium on Thursday, Nov. 18, 2021, in Las Vegas. (L.E. Baskow/Las Vegas Review-Journal) @Left_Eye_Images 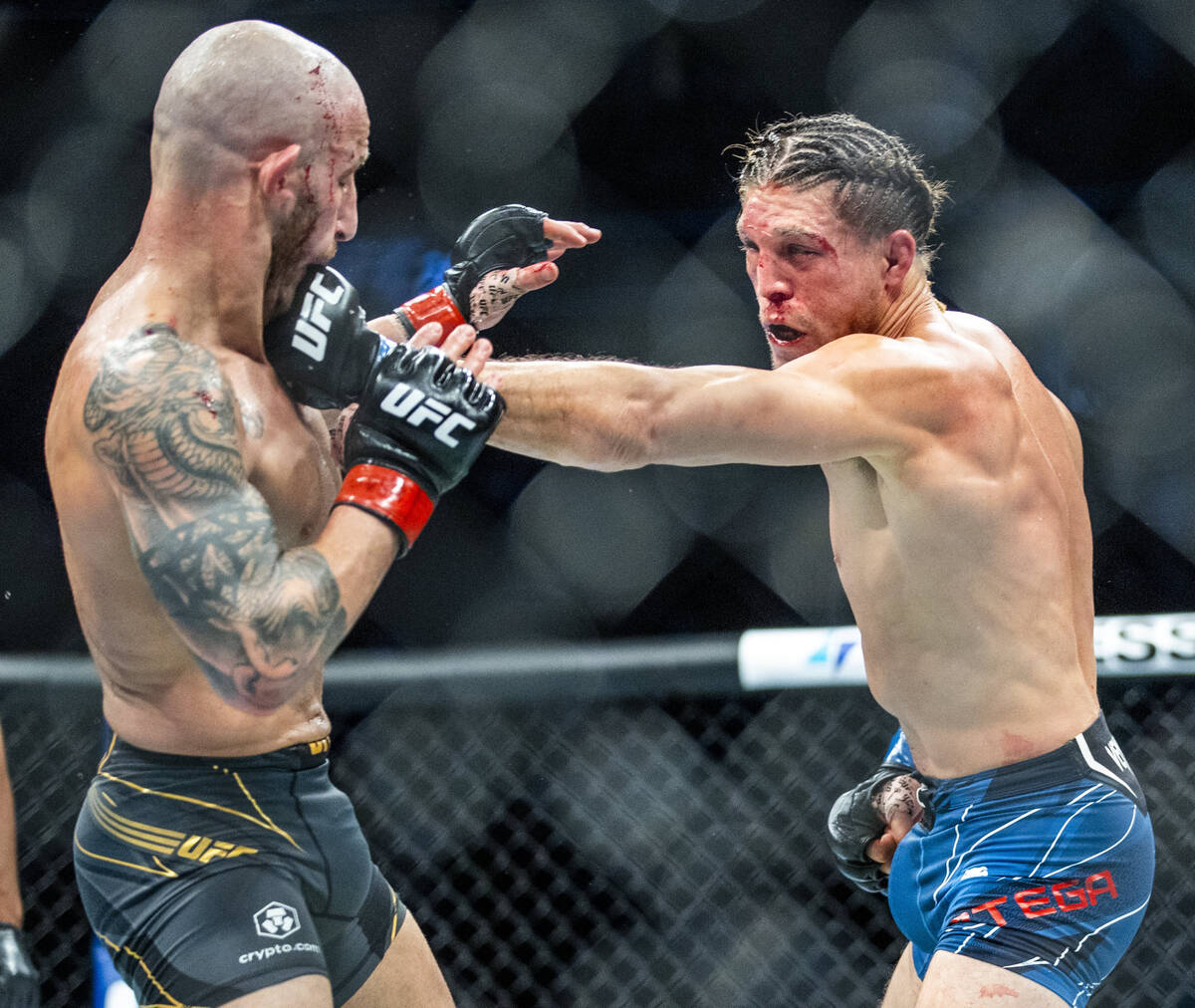 Alexander Volkanovski, left, takes a punch to the chin from Brian Ortega in the fourth round during their featherweight title fight in UFC 266 at T-Mobile Arena on Saturday, Sept. 25, 2021, in Las Vegas. (L.E. Baskow/Las Vegas Review-Journal) @Left_Eye_Images 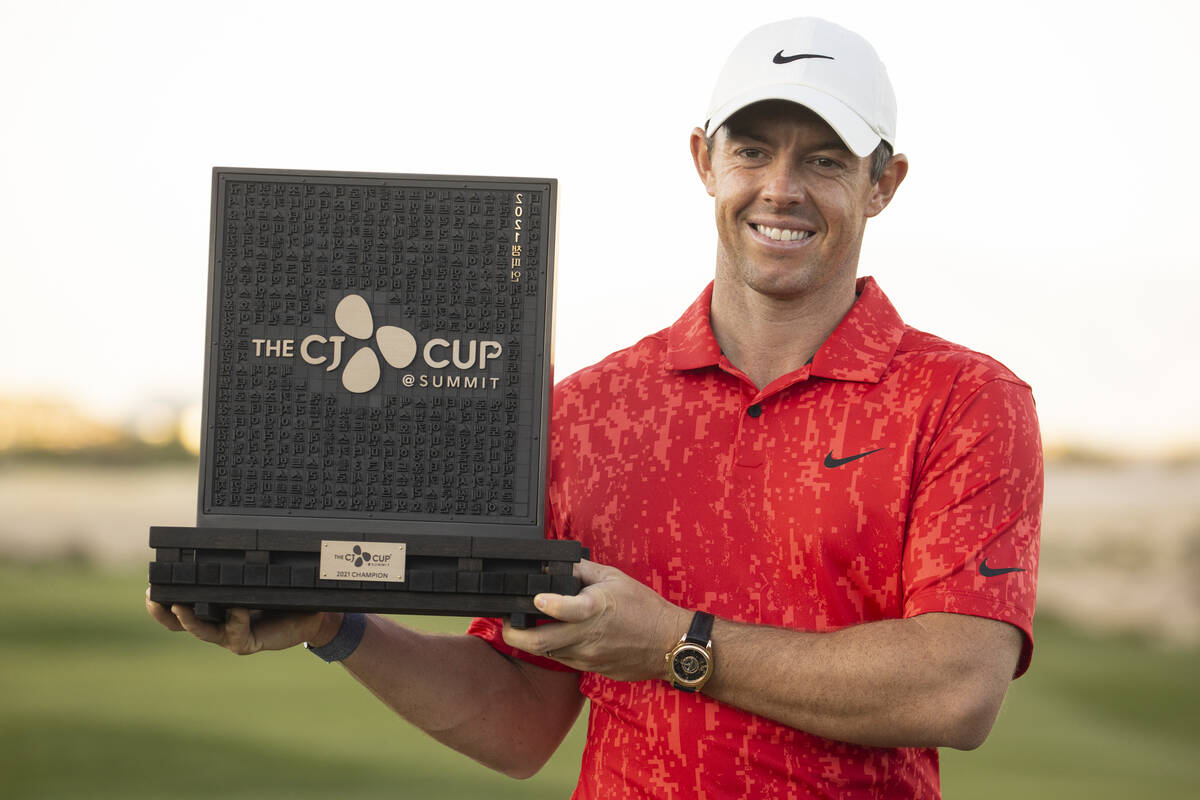 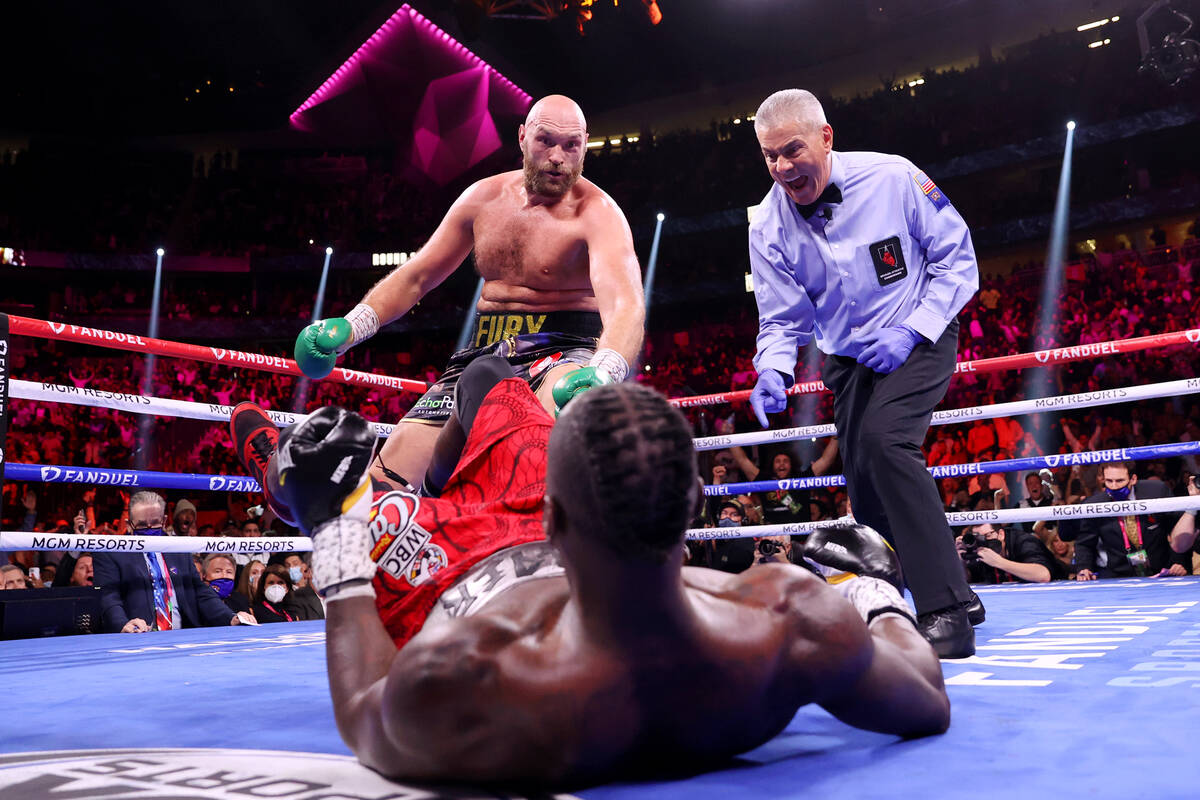 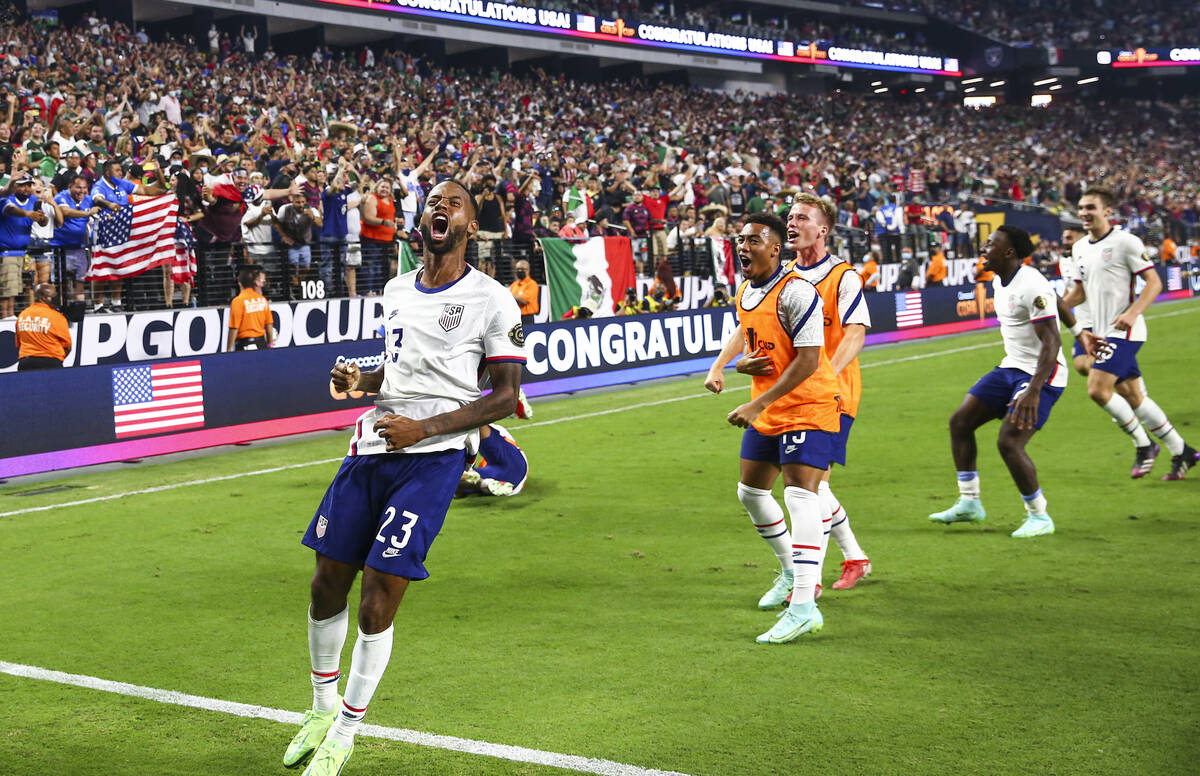 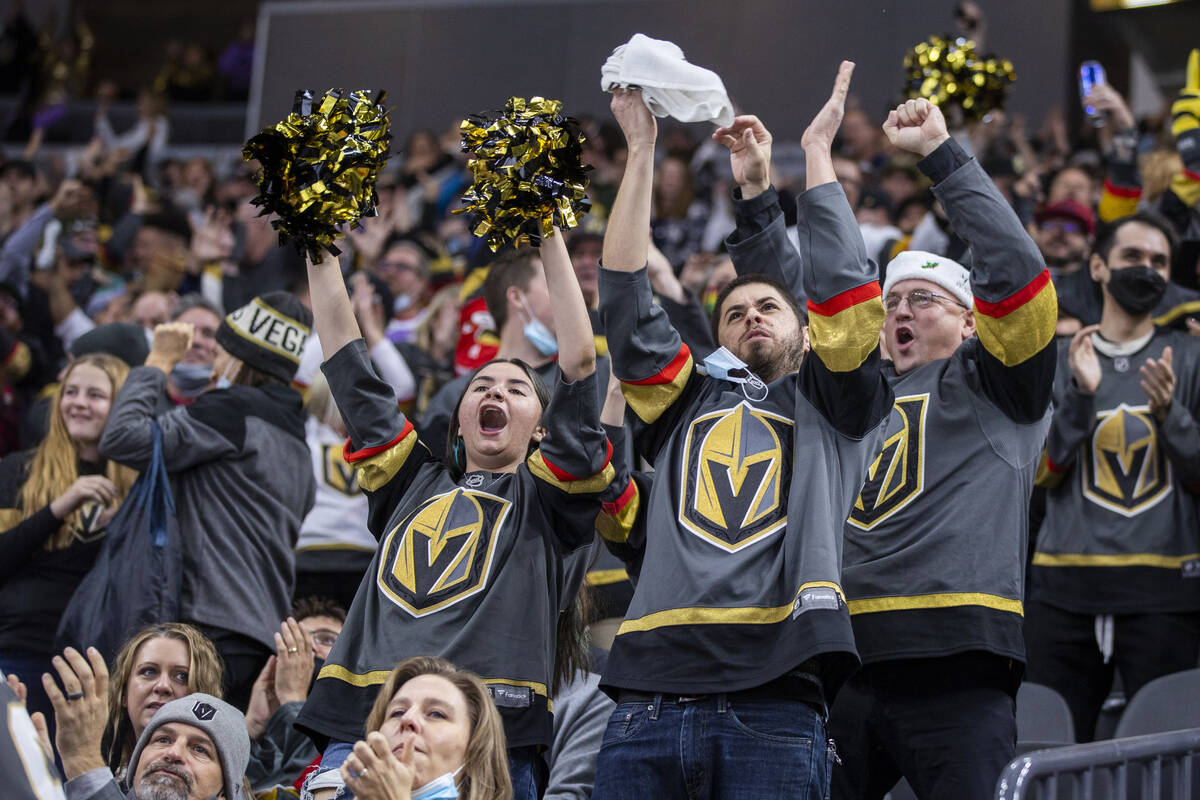 Golden Knights fans celebrate a goal over the Columbus Blue Jackets during the second period of an NHL game at T-Mobile Arena on Saturday, Nov. 20, 2021, in Las Vegas. (L.E. Baskow/Las Vegas Review-Journal) @Left_Eye_Images

2021 a year to remember in Vegas sports

Fan favorites Marc-Andre Fleury and Ryan Reaves were traded to the Chicago Blackhawks and New York Rangers, respectively; another loss in a semifinal round (Montreal); acquired star center Jack Eichel in a trade; fans returned to T-Mobile Arena.

Already set to host the Pro Bowl and league draft in 2022, Las Vegas in December was awarded the 2024 Super Bowl by league owners.

Finished with the WNBA’s No. 2 playoff seed and fell to Phoenix in a dramatic semifinal series; Kelsey Plum bounced back from a torn Achilles tendon to win Sixth Player of the Year. She and Jackie Young led USA Basketball’s 3-on-3 team to the inaugural Olympic gold, while A’ja Wilson led Team USA in scoring en route to 5-on-5 gold with Aces teammate Chelsea Gray.

Football coach Marcus Arroyo won his first two games with the program and lost six others by one score; men’s basketball hired yet another new coach in Kevin Kruger, while women’s coach Lindy La Rocque thrived in her first full year on the job.

Returned to Las Vegas stronger than ever, with nearly 170,000 attending over 10 performances.

Las Vegas brothers Kyle and Kurt Busch each made the playoffs. Kurt, relegated to the scrap heap three years ago, won another race (Atlanta) as a springboard to joining Michael Jordan’s team at age 43.

Returned with a shortened spring season; Bishop Gorman returned to the top of the mountain in football in the fall, while Silverado, Moapa Valley and Pahranagat Valley also won state.

The LPGA committed to Las Vegas for at least three years with a new event, the Bank of Hope Match Play at Shadow Creek. Ally Ewing won the inaugural event. Because of COVID, Las Vegas once again received a second PGA Tour event after the Shriners Children’s Open, the CJ Cup. Rory McIlroy won for his 20th tour title; Sungjae Im won the Shriners.

It was the first major sport to return to competition after a COVID-related pause in 2020. The momentum created by that successful start propelled the company to its best financial year. UFC president Dana White said the company has thrived across all metrics: “It was the best year we ever had.”

The U.S. men’s national team won the Concacaf Gold Cup with a 1-0 victory over Mexico before a sold-out crowd of 61,514 fans at Allegiant Stadium.