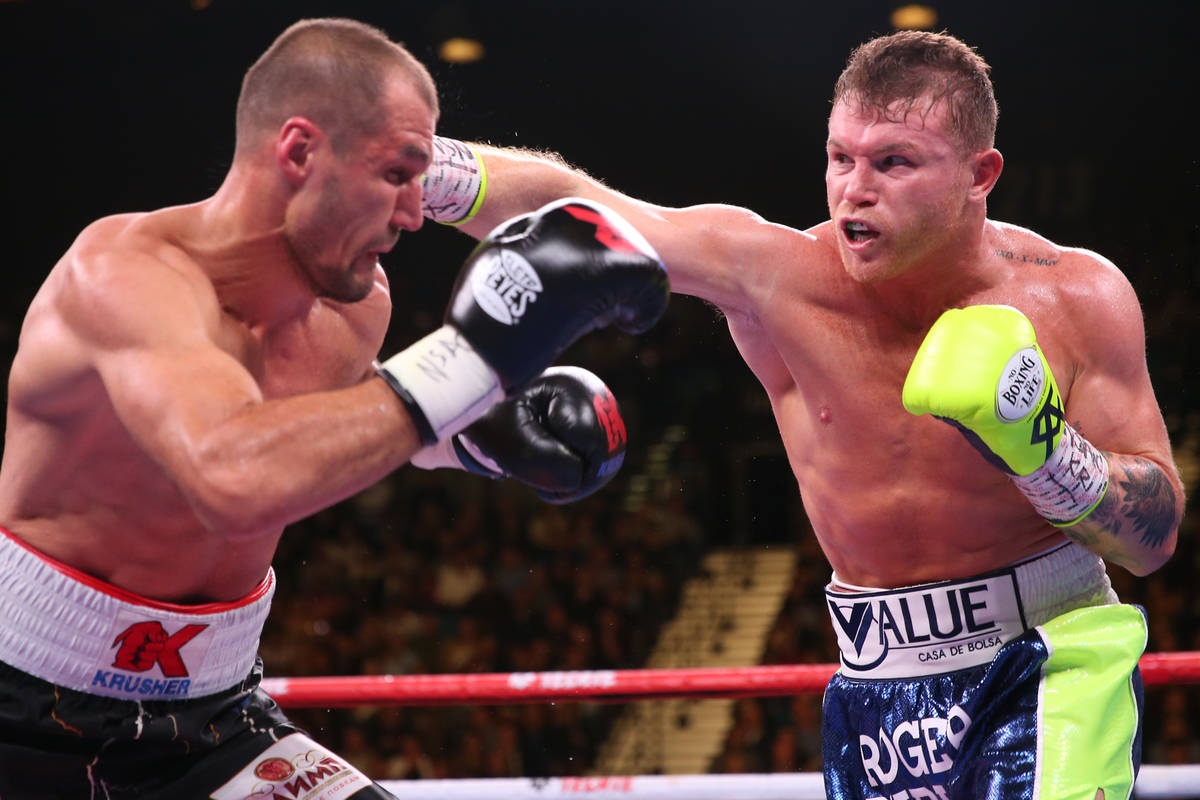 Saul “Canelo” Alvarez, right, throws a punch against Sergey Kovalev during the third round of the WBO light heavyweight title bout at the MGM Grand Garden Arena in Las Vegas, Saturday, Nov. 2, 2019. Alvarez won by way of knockout in the 11th round. (Erik Verduzco / Las Vegas Review-Journal) @Erik_Verduzco

MGM Grand Garden will host the fight, per Ring Magazine, and Las Vegas will host an Alvarez fight for the 14th time — and first since Nov. 2, 2019, when the Mexican icon knocked out Sergey Kovalev to win the WBO light heavyweight championship.

“I’m very excited about this and about becoming the first undisputed Latino super-middleweight champion in boxing history,” Alvarez told Ring Magazine. “I’m happy to make history. I’m going to unify all of the belts.”

Alvarez, 31, spent the last year collecting the WBC, WBO and WBA super middleweight championships, beating Callum Smith for the WBC and WBA straps last December and Billy Joe Saunders for the WBO crown in May.

He’s long sought to add Plant’s IBF title, and the two fighters were originally targeting Mexican Independence Day weekend in September, when Alvarez (56-1-2, 38 knockouts) often fights in Las Vegas. Fight negotiations broke down last month, according to ESPN, and Alvarez went on to consider other opponents.

But talks resumed this month and the parties came to an agreement, with Alvarez’s manager Eddy Reynoso striking a deal Wednesday night with Plant’s manager Al Haymon, according to Ring Magazine.

“We’re going for the triple crown,” Reynoso told Ring Magazine. “This is the fight that we always wanted and it was made Wednesday night. I was very convinced that this would happen. It’s been our goal since December and our mission.”

Haymon’s Premier Boxing Champions will present the fight via pay-per-view, a platform Alvarez hasn’t fought on since he beat Gennady Golovkin on Sept. 15, 2018.

Plant (21-0, 12 KOs), a 29-year-old Nashville area native who lives and trains in Las Vegas, will be fighting for the first time as a pay-per-view headliner.