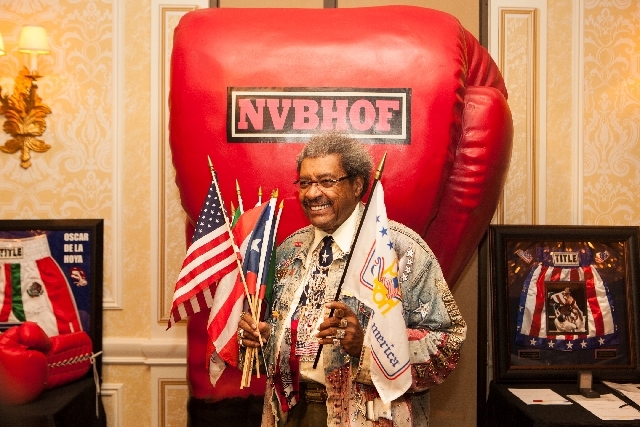 Don King, shown Saturday holding flags representing the countries where he promoted fights, was one of 19 inductees in the inaugural class of the Nevada Boxing Hall of Fame.

Mike Tyson was the closing act, which seemed appropriate since he knows a thing or two about headlining shows on the Strip.

He had tough acts to follow, including another former heavyweight champion. Larry Holmes worked the crowd like a standup comic, refusing to give up the microphone as he talked about his career and, surprisingly, his fondness for promoter Don King, whom he once sued for taking his money without asking.

“I don’t care if he took the money because he always gave me more money,” Holmes said, pointing to King sitting a few feet away.

Boxing makes strange bedfellows, but this night was a love-in the likes of which the sport seldom has seen. Holmes joked with Tyson about being knocked out by him, Floyd Mayweather Jr. said nice things about Bob Arum, and Arum and bitter rival King shared a hug.

Before that, there was a tender moment when Tyson walked over to former referee Mills Lane — making a rare public appearance after being incapacitated by a stroke — and gently laid his cheek on Lane’s head in a soft embrace. Lane had disqualified Tyson for biting Evander Holyfield’s ear in the infamous “Bite Fight.”

The occasion was the inaugural banquet for the newly formed Nevada Boxing Hall of Fame, and the honorees were like a who’s who of boxing from the 1980s and ’90s. It was a time when no one asked what was wrong with boxing; a time when the outdoor fights at Caesars Palace were as much a spectacle as the faux Roman debauchery that went on inside.

Holmes was one of just 19 inductees, a group that included just about everyone except the one man who could have brought down the house at the Monte Carlo. Maybe it was for the best, because Muhammad Ali suffered two of his most painful defeats in Las Vegas, losing to Holmes and Leon Spinks in fights in which he was a shell of his old self.

Spinks himself was there, though he spent most of Saturday night camped in front of the bartender, drinking Bud Lights on the house.

This being a boxing crowd, there was only so much patience even with the greats. Holmes found that out as he continued long past his allotted time with tales of King and the two heavyweights he said hit him harder than anyone else — Tyson and Earnie Shavers, who also was in the crowd.

“Sit down!” someone yelled from the back of the room, but the former heavyweight champion was having none of it.

No one told Mayweather to sit down when his turn came. Not when he was surrounded onstage by about two dozen members of his entourage, all applauding and laughing at pretty much anything Mayweather said.

And why not? Like him or hate him, Mayweather is the main force keeping boxing alive and well in this gambling town today. His fight Sept. 14 with Saul “Canelo” Alvarez will be one of the richest — if not the richest — in history, bringing high-rolling gamblers to town for a weekend the likes of which fighters who came before him used to provide.

The real fear was that King wouldn’t stop talking when it came time for his induction. The frizzy-haired promoter is 81 and has slowed some, but anyone who remembered his four-hour news conferences during his prime had to wonder what would happen when he took the microphone onstage.

Turned out there was little need to worry. King talked about his late wife, Henrietta, and how much he loves Holmes because he’s respectable and appreciative of all the promoter did for him. He also talked about how Ali gave him his start and how he had to take the Rumble in the Jungle with Ali and George Foreman to Zaire because no one would put up the money for it at home.

“In America they wouldn’t give a black man eye water to cry with,” King said. “I had to go all the way around the world looking for money after signing two of the hottest athletes in America at the time.”

If the sight of fellow octogenarians King and Arum sitting calmly 20 feet from each other was startling, seeing Tyson onstage wasn’t. The man who once sued King for $100 million for stealing his money has reinvented himself as an entertainer, taking his one-man show on tour and to Broadway and getting generally good reviews along the way.

It was nearing midnight, and Sugar Ray Leonard already had said it was past his bedtime when Tyson was introduced by Barry Tompkins, the fight broadcaster who had a few stories to tell. One of them was about when Tyson was fighting nemesis Mitch Green at Madison Square Garden and Tyson landed a big right hand that sent something flying out of Green’s mouth.

Ever the pro, Tompkins instinctively reached up and grabbed Green’s tooth as it whizzed by.

Tyson thanked his late trainer and mentor Cus D’Amato for his career, saying he was doomed on the streets of Brooklyn before D’Amato took an interest in him.

“I’m a guy who comes from a prostitute mother and pimp father, and when I go to another country I get mobbed like I’m the president,” Tyson said. “I’m very grateful for that.”

Like many of the stories in the room that night, it could happen only in boxing.

Or maybe, as one promoter likes to say, only in America.

Tim Dahlberg is a Las Vegas-based national sports columnist for The Associated Press. Write to him at tdahlberg@ap.org or http://twitter.com/timdahlberg.