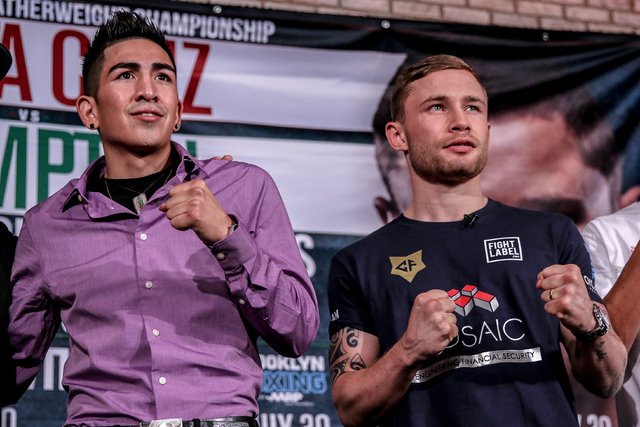 The first time Carl Frampton fought in the United States, he hit the canvas twice in the first round against Mexican underdog Alejandro Gonzalez Jr.

The Northern Ireland star recovered to win by unanimous decision last July in El Paso, Texas. Frampton now finds himself in a similar situation for his second U.S fight. The difference this time, his Mexican opponent is a three-division champion.

Frampton, a unified 122-pound titlist, is moving up one weight class to fight WBA featherweight champion Leo Santa Cruz on Saturday in a Showtime-televised main event at the Barclays Center in Brooklyn, New York.

“They come here for a fight thinking it will be easy, and Carl ended up on his back,” said McCullough, who has been living in Las Vegas since 1993. “When you fight Mexicans, they’re tough. I don’t care who it is. Carl made excuses about the canvas being slippery.”

McCullough, 46, and Frampton, 29, were born in Belfast, the capital city of Northern Ireland. Frampton grew up idolizing McCullough, but the two haven’t spoken in a year.

McCullough, a former reporter for Ring Magazine and Sky Sports, was critical of Frampton’s poor performance against Gonzalez.

“He stopped following me on Twitter,” McCullough said. “As a journalist, I need to tell the truth. Like they say, sometimes the truth hurts.”

Frampton is dedicating the fight to his manager, Barry McGuigan, a former WBA featherweight champion from Ireland. McGuigan lost his belt to heavy underdog Steve Cruz in 1986 at the outdoor arena at Caesars Palace. The fight was McGuigan’s second and last in the U.S.

“McGuigan was my hero,” McCullough said. “I was 15, and I remember being devastated my hero lost. There’s some history there for Carl. He’s going for the same belt as his manager.”

Santa Cruz almost passed on fighting Frampton after finding out his father and trainer, Jose, was diagnosed with cancer in April.

Jose Santa Cruz, 56, underwent chemotherapy and had spinal surgery. He is close to remission and healthy enough to attend the fight.

The featherweight champion considered canceling the fight if his father was unable to attend.

“I’m so happy to have my dad here,” Santa Cruz said. “We thought about not taking this fight when he got the (cancer) diagnosis. He’s always been there with me since the beginning of my career. Since I was very small. When the doctors told me that he would be in my corner, I was even more ready for this fight.”

Mikey Garcia is back Saturday after a long hiatus.

The Oxnard, California, native had a falling out with Top Rank, the Las Vegas-based promotional company. Garcia sued Top Rank over a contract dispute, and the sides settled in April.