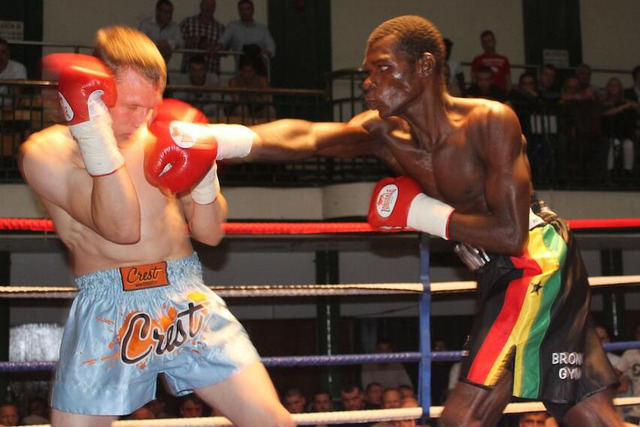 As he watched people zip-lining above him and the lights of Fremont Street flashing around him, Richard Commey was taken aback, much like any first-time visitor to Las Vegas would be.

“This place, it is amazing!” he said.

Commey, who is here to work, not sightsee, is one of those first-time visitors. Perhaps after he is done fighting Bahodir Mamadjonov tonight in the 10-round main event at the Downtown Las Vegas Events Center, he might sneak in a trip to the Strip. But for the 28-year-old lightweight boxer from Ghana, he knows business comes first.

Tonight’s fight, which will be televised nationally on the CBS Sports Network, is for the vacant International Boxing Federation Intercontinental title. It’s not the belt Commey is ultimately seeking, but he is not in a rush. He knows if he can keep winning and look impressive doing so, he’ll get a shot at one of the 135-pound world titles.

“This is a big step for me in my career,” he said. “It is my first time fighting in America and fighting on American television. It’s a chance for people to see who I am.”

Mamadjonov (17-1, 11 KOs) is originally from Uzbekistan. He lives in Houston and was promoted by Don King until they parted last month. He last fought in August 2014.

“I’ve seen him, and we have a good game plan,” Commey said.

Ghana has produced excellent fighters, including Azumah Nelson, Ike Quartey, Ben Tackie, Joshua Clottey and Joseph Agbeko. They are good role models in the ring for Commey, who hopes to be part of Ghana’s fighting legacy someday.

“We all came from the same area (capital city of Accra),” he said. “There are a lot of great boxers there.”

Commey learned to box as a youngster while living in England. He returned to Ghana and got serious about the sport. He was schooled in the fundamentals, and while he has shown to be something of a knockout artist, he’s also a good defensive fighter.

“Defense is very important,” he said. “You don’t want to get hit.”

Commey said he hopes the hard work will lead to a big-money fight and world title opportunity.

“My dream is to come back here someday and fight at the MGM (Grand Garden),” he said. “But first, I must win this fight so they will invite me back to Las Vegas.”

In tonight’s co-feature, undefeated lightweight Jesus “Chuy” Gutierrez of Las Vegas will face Angel Hernandez in an eight-round bout. The first bell is scheduled for 7:30 p.m.