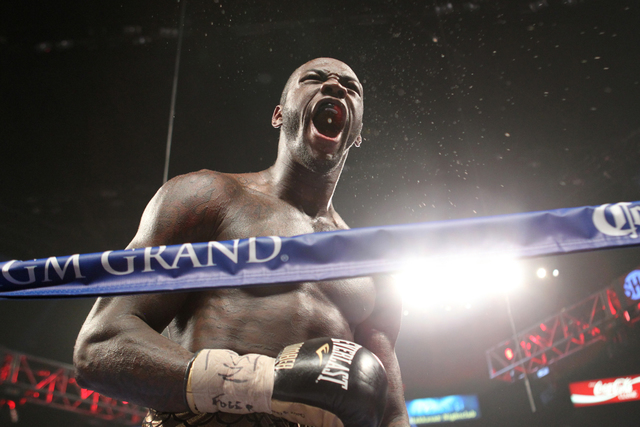 Deontay Wilder reacts at the end of the 12 round in his bout against Bermane Stiverne for the WBC heavyweight title at the MGM Grand Garden Arena in Las Vegas Saturday, Jan. 17, 2015. (Erik Verduzco/Las Vegas Review-Journal) 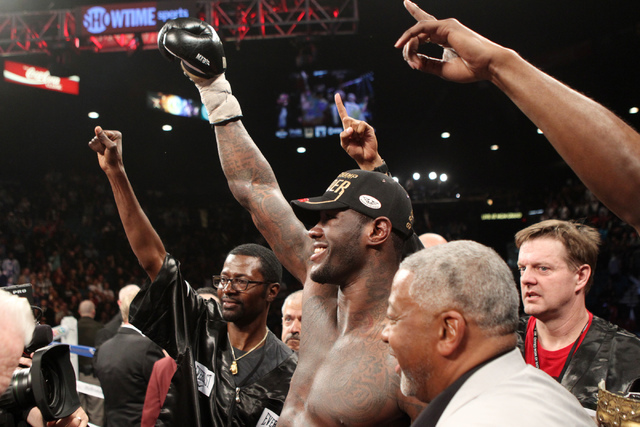 Deontay Wilder didn’t want to waste the training he had put in for his May 21 WBC heavyweight title defense against Alexander Povetkin in Moscow, which was postponed after Povetkin tested positive for steroids.

It’s not the fight he expected, but Wilder (36-0, 35 knockouts) gets to stay home and defend his belt against Chris Arreola on July 16 in Birmingham, Alabama. The fight is part of the Premier Boxing Champions series and will be televised by Fox and Fox Deportes.

“Things happen. This is boxing. It is a business,” Wilder said. “The saying is, ‘One door closes and another one opens.’ This is a prime example of that. This opportunity is opened wide.

“I understand being patient, and patience is a virtue. I’ve been patient all my life. I am not an overnight success. I don’t believe in luck.

“As you see, Chris Arreola stayed patient. You wonder why he continued to get title fights. It is his time. With the circumstances that we were facing, to come back and do a short-notice-type fight, as far as looking for opponents, we knew it had to be the right person.”

“I have to make the best out of this opportunity,” Arreola said. “(Wilder) is doing what he is supposed to do as a champion. He is defending his title. I have to approach this fight different than any others. I have nothing to lose and everything to gain. Deontay has a lot to lose. He is going to come prepared. He knows what kind of fighter I am.”

“The key for this fight is Dewey Cooper,” Vargas said of his trainer. “He’s coming up with the game plan for Sept. 3, and as long as I follow it, I know we’re going to be victorious.”

Vargas (27-1, 10 KOs) won the belt March 5 when he stopped Sadam Ali in the ninth round in Washington, D.C. It was Cooper’s first time in Vargas’ corner.

“I have 100 percent confidence in my entire team, not just Dewey,” Vargas said. “We’re going to train hard and train smart and be totally prepared.”

It’s been a long time coming, but Andre Ward might finally fight in Las Vegas.

Roc Nation Sports, which promotes Ward, has asked the Nevada Athletic Commission to reserve Nov. 19 at T-Mobile Arena for a long-awaited light heavyweight title fight between Ward and Sergey Kovalev. Main Events, which promotes Kovalev, also has requested to co-promote on that date.

Ward (29-0, 15 KOs) is coming off a 12-round unanimous decision over Sullivan Barrera on March 26 in Oakland, California. Kovalev, the WBA, IBF and WBO 175-pound champion, defends his titles July 11 against Isaac Chilemba in Russia.

Also, Golden Boy Promotions has requested Sept. 17 for T-Mobile Arena for what is expected to be Canelo Alvarez’s next fight, against an opponent to be determined. Alvarez stopped Amir Khan on May 7 in the first card at T-Mobile.

Both dates are expected to be approved at the commission’s meeting Tuesday.

HBO Pay Per View is expected to televise Ward-Kovalev and the Alvarez fight.

Barry’s Boxing will host an amateur card at 3 p.m. Saturday at the Santa Fe, with 18 bouts featuring local fighters. Admission is $10.