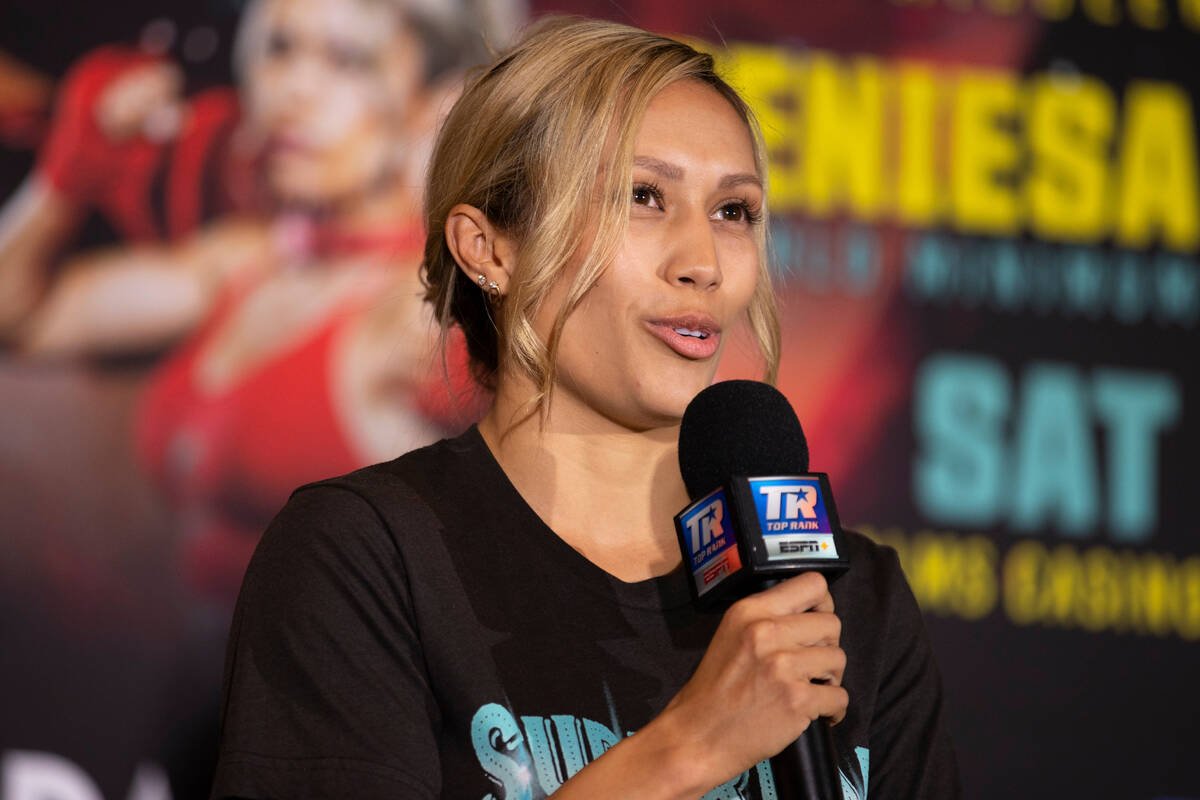 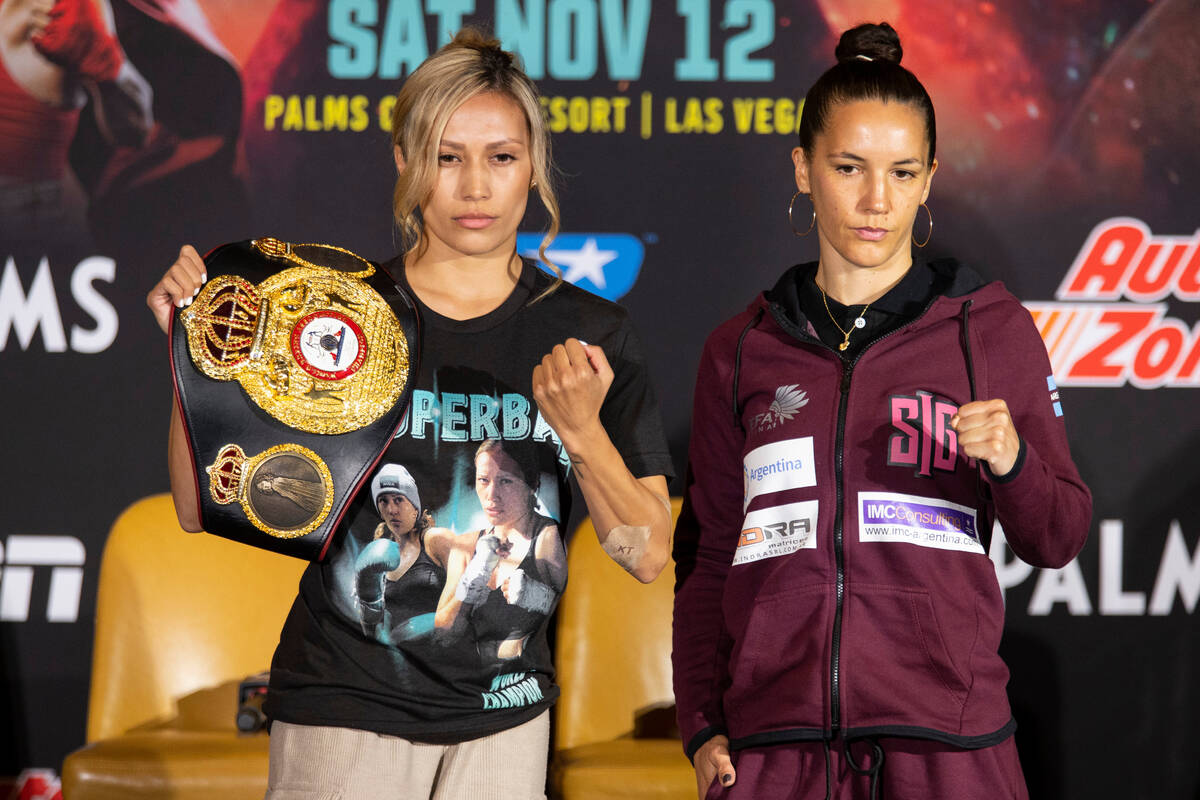 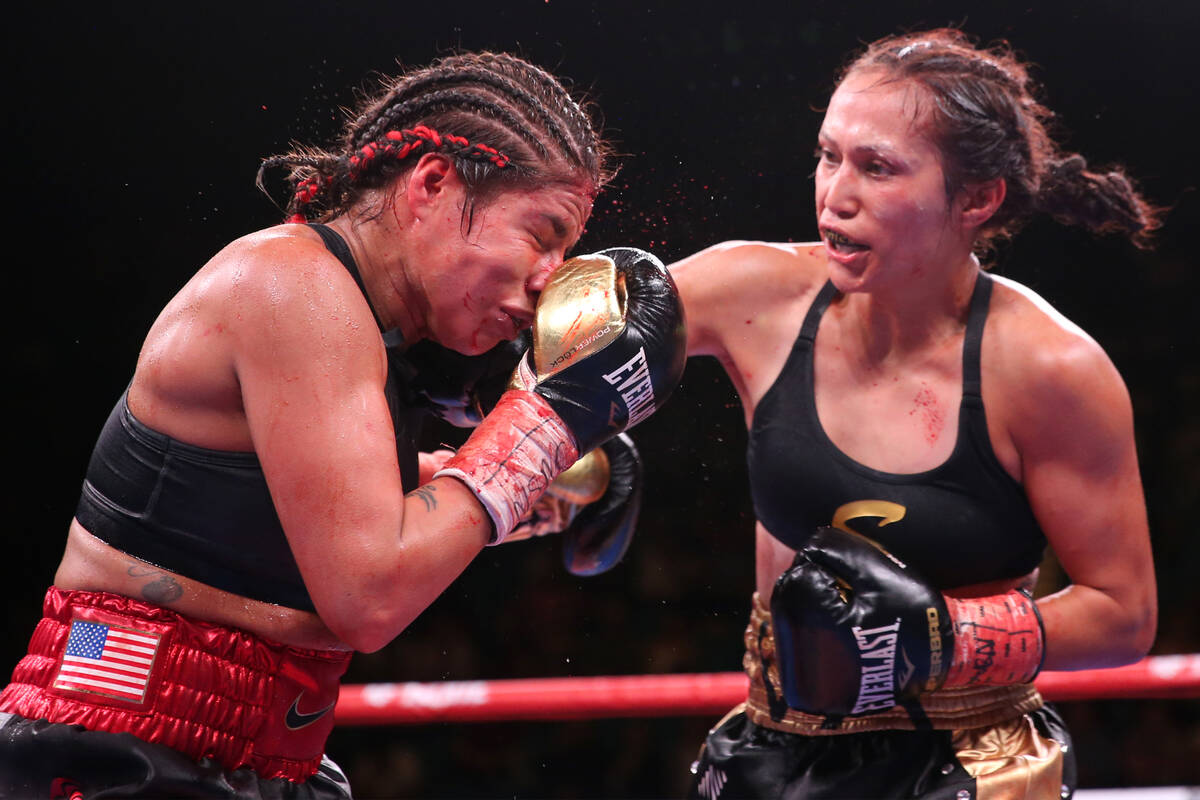 Her eyes filled with tears. Her voice quivered.

But WBA minimum-weight champion Seniesa “Superbad” Estrada resisted the urge to cry, knowing one of the longest layoffs of her professional boxing career is finally ending.

“These past 11 months have been difficult for me to stay out of the ring and not fighting,” she said Thursday inside the Palms Casino Resort during the final promotional press conference before her upcoming fight.

The 30-year-old Estrada was formerly promoted by Golden Boy Promotions, but a contractual dispute triggered the inactivity, her release and a promotional agreement with Top Rank, for which Janibek Alimkhanuly (12-0, eight KOs) will defend his WBO middleweight championship against Denzel Bentley (17-1-1, 14 KOs) in the card’s main event.

The fight against Gala Villarino will be the first since Dec. 18 for Estrada, a two-division champion and pound-for-pound stalwart who returns for her second bout in Las Vegas by way of her native East Los Angeles.

“I felt like time was just wasting,” she said. “Of course that’s just me being frustrated with my situation, but now that everything is back to how it should be. … I think I’m in the best position at the best time in my career.”

As Estrada’s eyes welled, so too did those of her father, Joe, who introduced her to boxing and remains in her corner as one of her trainers. His pugilistic potential was undermined by “drugs and gangs,” Estrada said, but his interest wasn’t and they’d watch boxing every weekend — beginning, she says, when she was 5 or 6.

“From the very first boxing fight I watched, I completely fell in love with it,” Estrada said.

So much so that she decided “this is exactly what I’m going to do for most of my life.”

Except her father was adamantly against it, rebuffing her requests to train at a gym because of the sport’s inherent brutality.

But Estrada wouldn’t relent until he would — and he eventually did, albeit after several months of persistent pleas. Trainers at the first gym they visited suggested Estrada was too young.

Plus, they were leery of welcoming a girl.

One of her dad’s childhood friends coached, though, at a gym in his Boyle Heights neighborhood and would welcome Estrada, who sought to return after the first of countless rigorous workouts. She even sparred with a boy within two weeks at the request of her dad, who hoped she would struggle and quit.

Instead, she beat him so soundly that he left the gym for good.

“I saw the look in her eye,” her father said, committing that day to his 8-year-old daughter’s corner.

Together, they traveled the country as Estrada won more than 100 amateur victories against five defeats, building confidence, experience and a brand in Los Angeles. She turned professional in 2011, but only had five fights in her first four years amid the perceived lack of interest in women’s boxing.

But her local buzz helped her land in 2016 on a card in Los Angeles topped by middleweight great Gennady Golovkin — leading to regular work on cards promoted by Golden Boy chairman Oscar De La Hoya and Roy Jones Jr., among others.

In 2018, Estrada signed a multi-year promotional agreement with Golden Boy. In 2019, she beat Marlen Esparza at MGM Grand Garden for the WBA interim flyweight title on the undercard of Canelo Alvarez’s victory over Sergey Kovalev. In 2020, she won her 105-pound title from Anabel Ortiz and in 2021 the WBO junior flyweight title from Tenkai Tsunami.

In 2022, her burgeoning career stalled as she campaigned to no avail for a more favorable deal from Golden Boy.

Top Rank though, Joe Estrada said, met his daughter’s wishes by giving her “exactly what she was asking for.” Estrada signed a multi-year deal in July, joining former unified 130-pound champion Mikaela Mayer as the second woman in the stable — and thus, beginning her second act.

Estrada covets undisputed championships in three weight classes, “so once I do that, I’ll be happy.”

But she’s happy already because “these past 11 months have been pretty frustrating. I just couldn’t wait to be back in the ring. It feels amazing.”