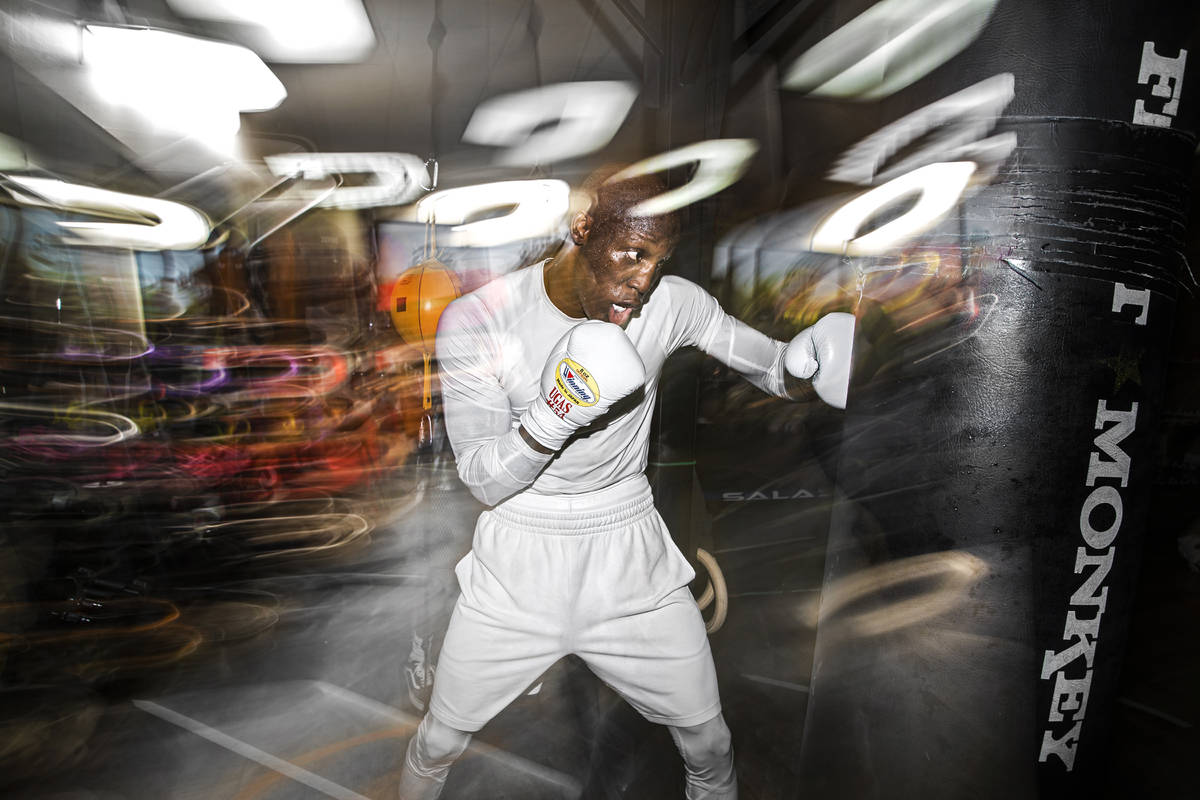 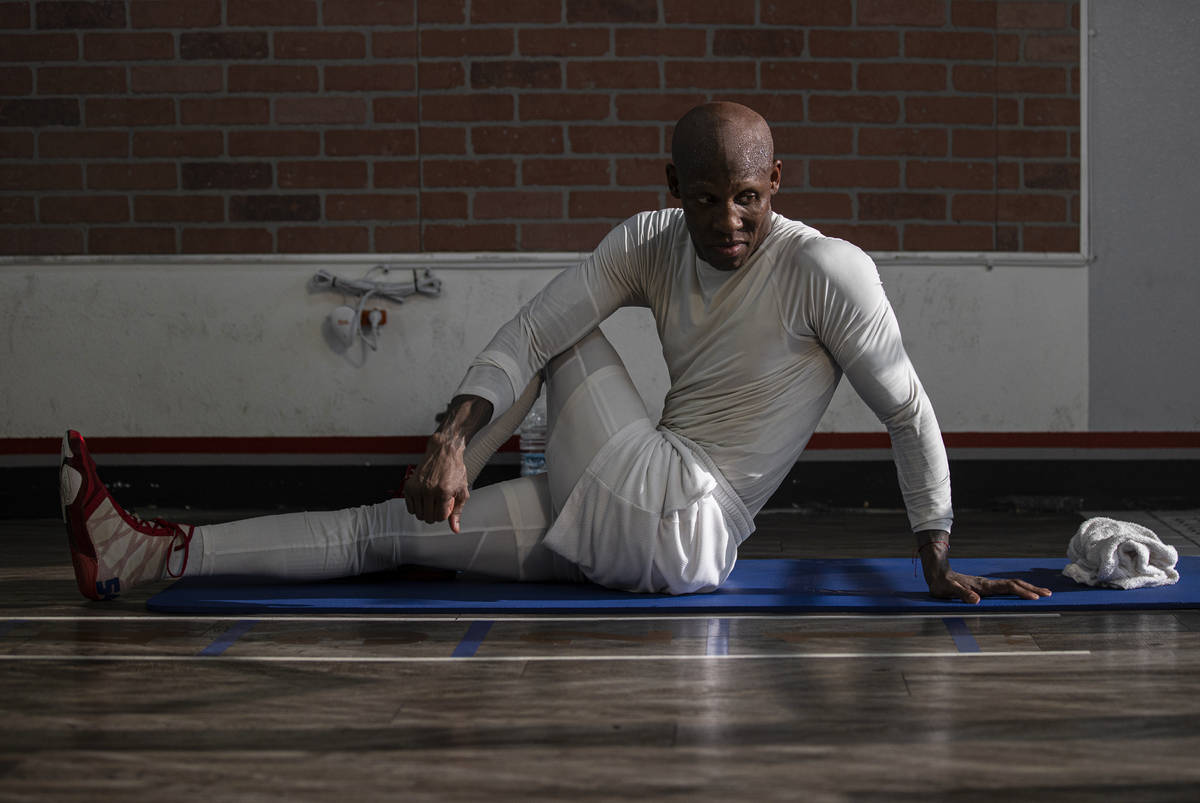 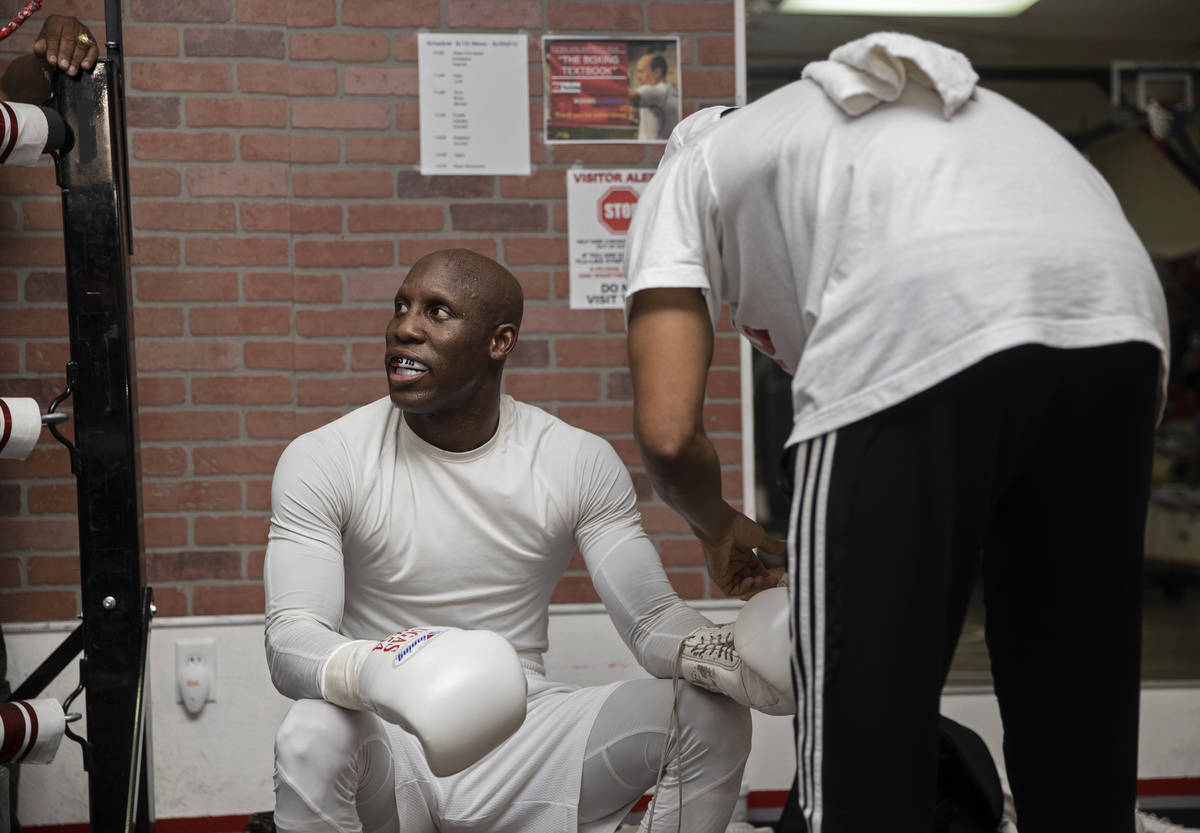 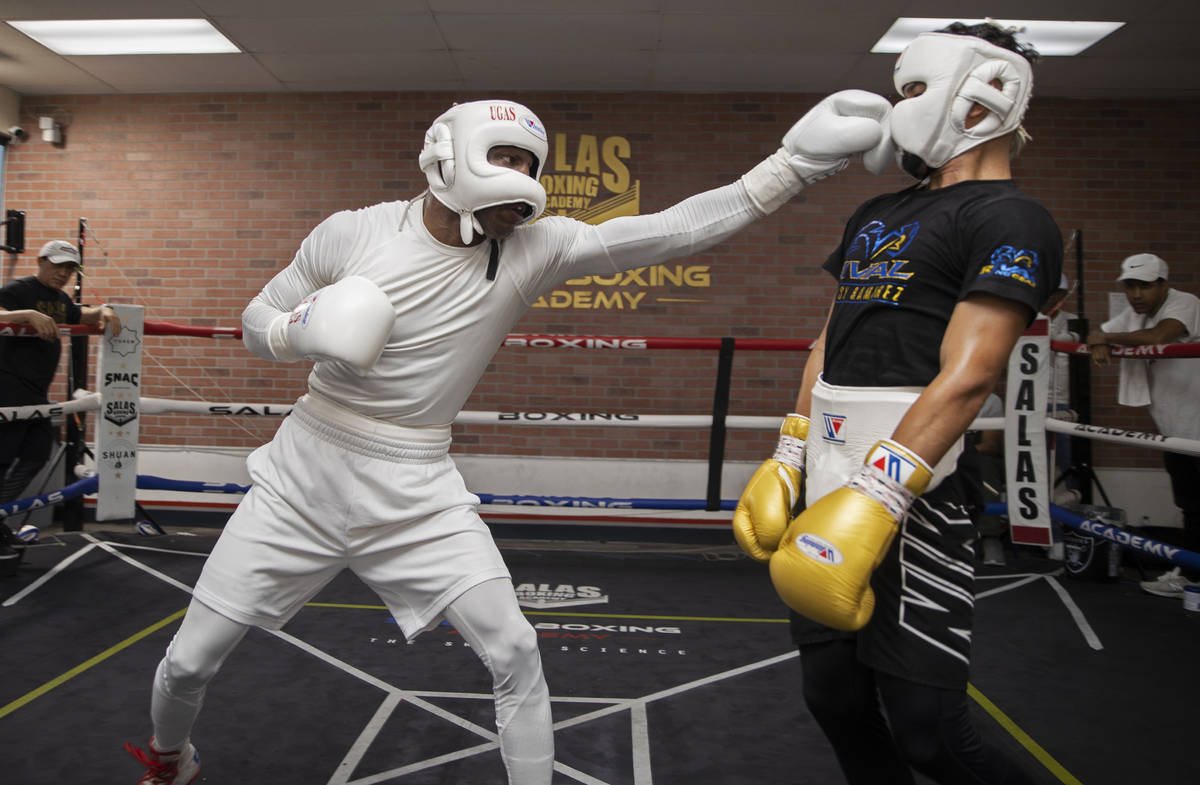 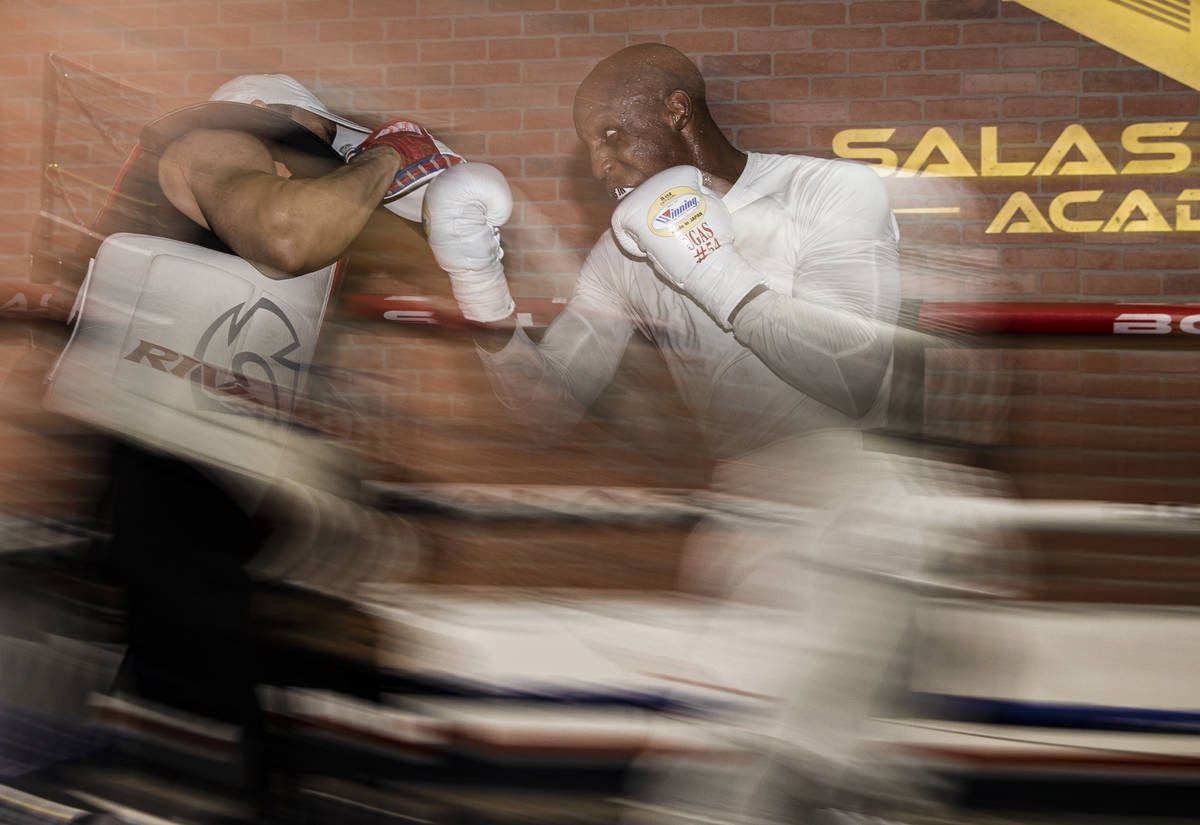 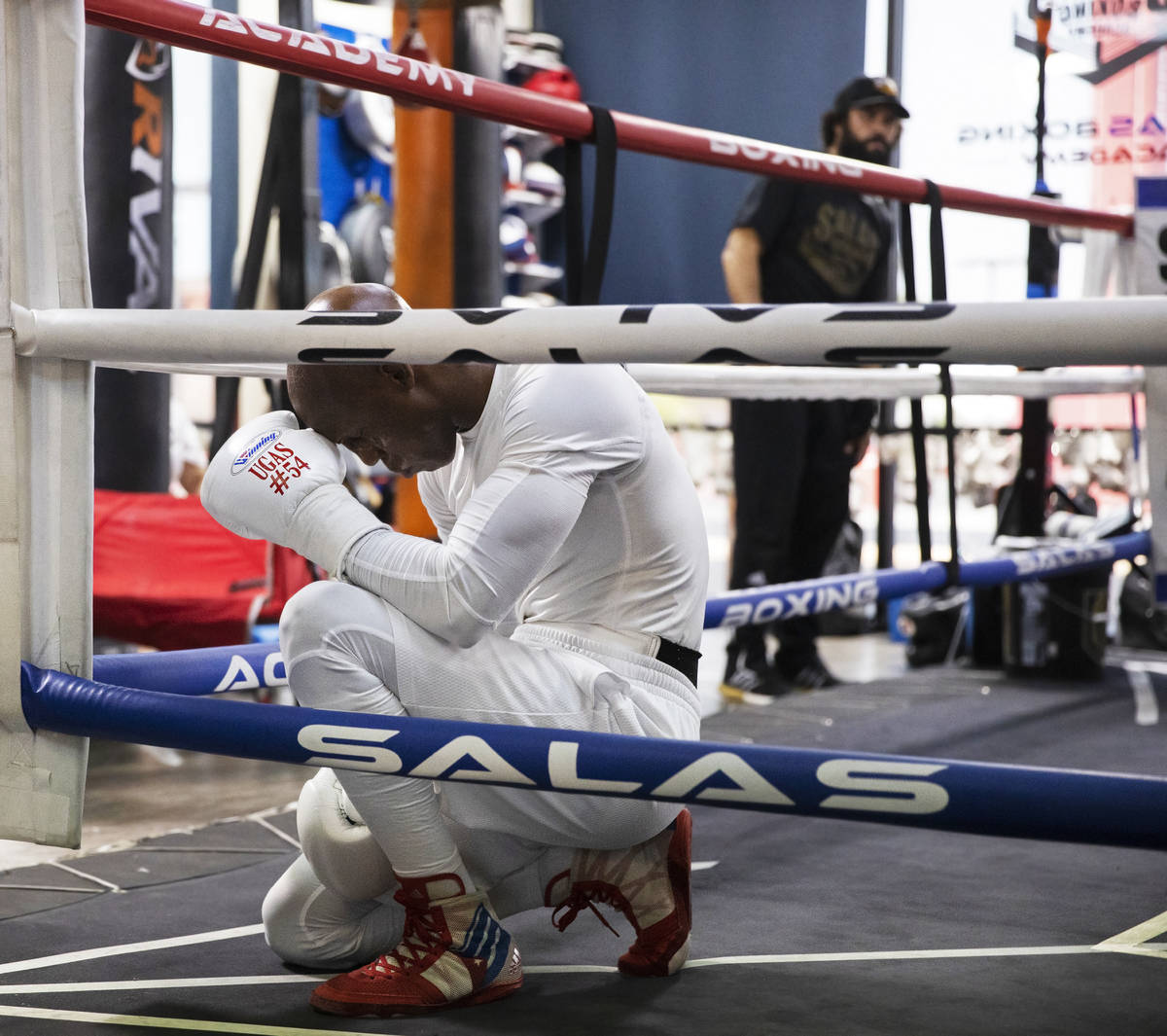 Welterweight Yordenis Ugas prays before the start of a training session for his upcoming fight with Manny Pacquiao on Monday, Aug. 16, 2021, at Salas Boxing Academy, in Las Vegas. (Benjamin Hager/Las Vegas Review-Journal) @benjaminhphoto 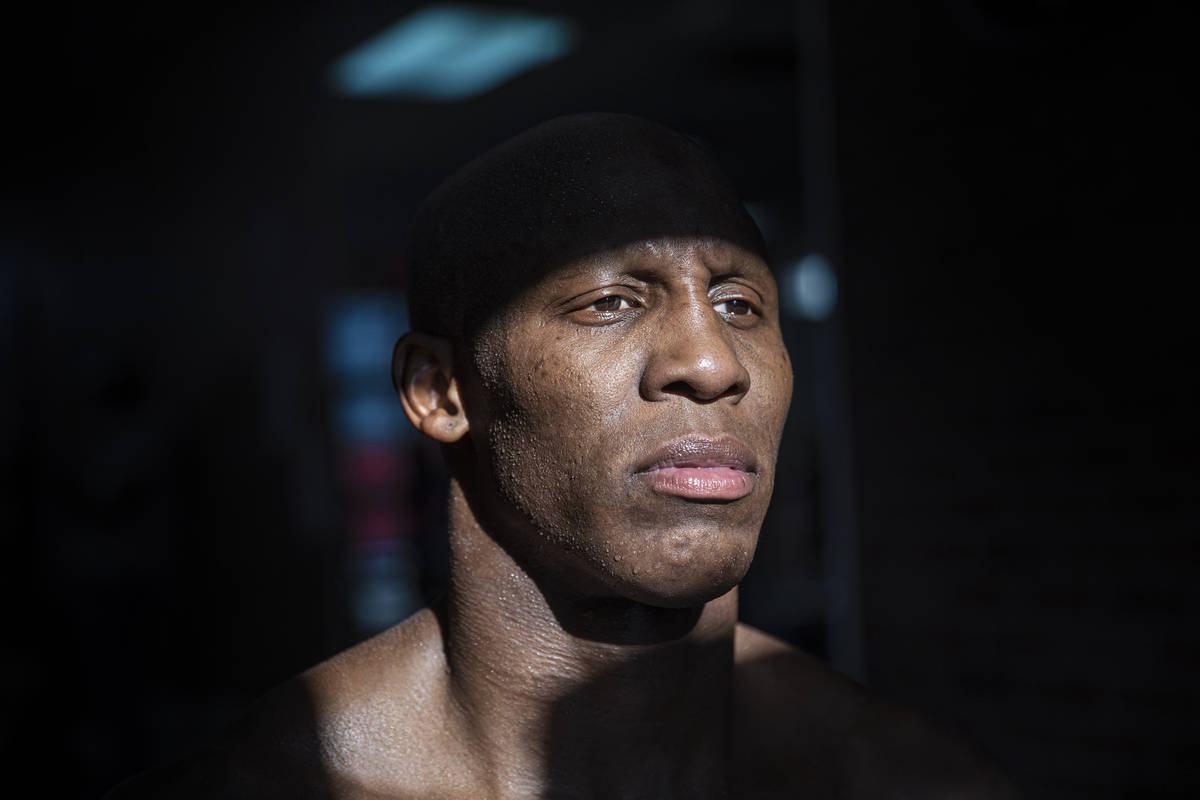 Welterweight Yordenis Ugas at Salas Boxing Academy at the conclusion of a training session for his upcoming fight with Manny Pacquiao on Monday, Aug. 16, 2021, in Las Vegas. (Benjamin Hager/Las Vegas Review-Journal) @benjaminhphoto 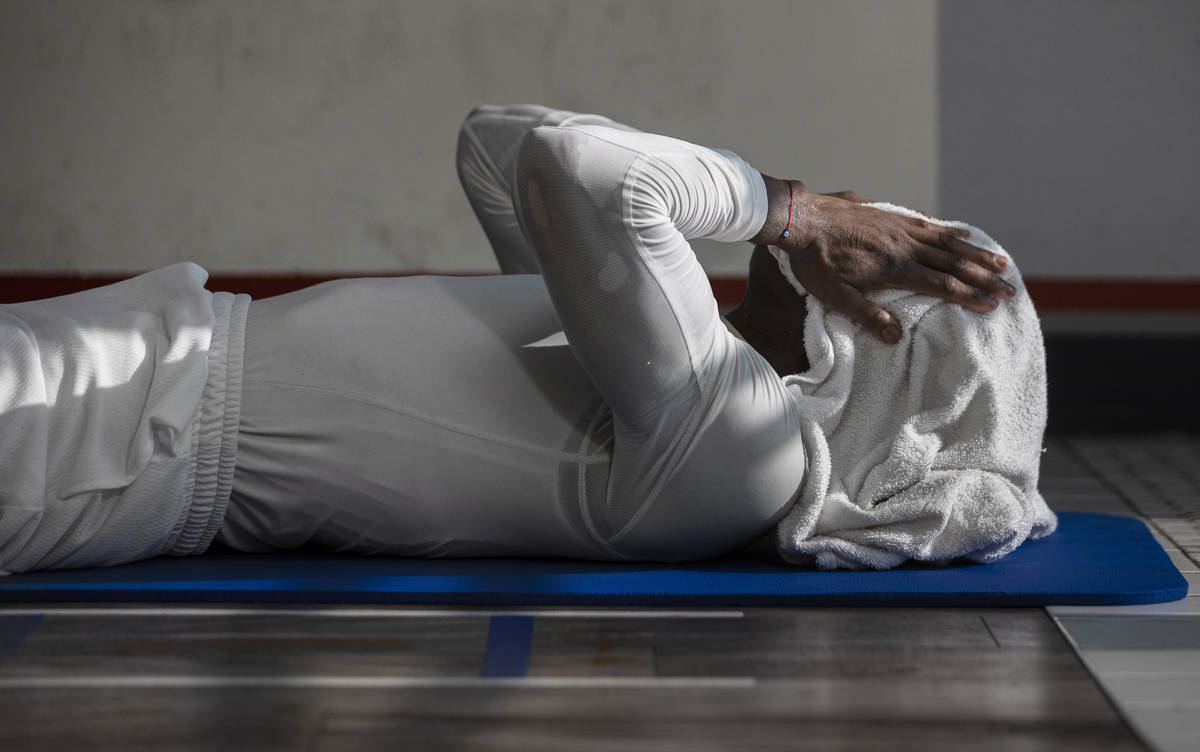 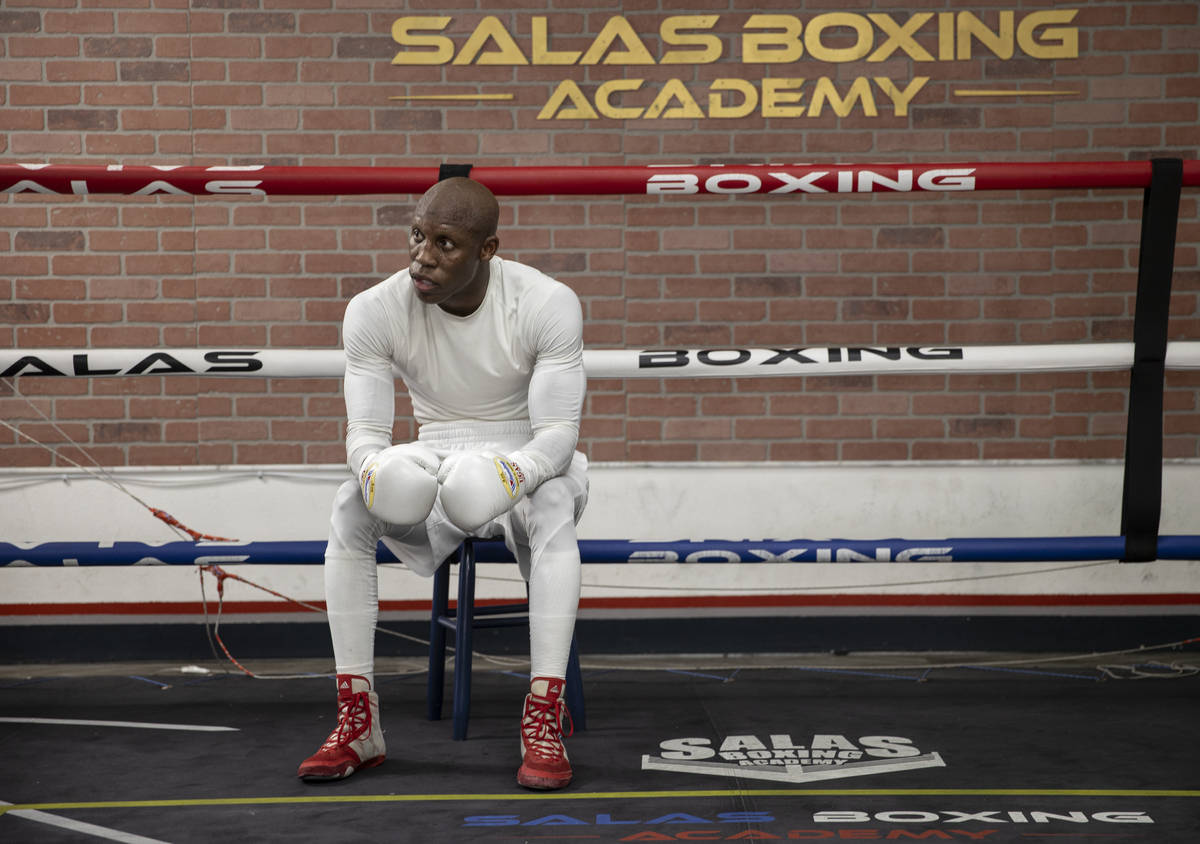 It was an important one. An Olympic semifinal against France’s Daouda Sow.

It was harrowing. Depressing, even, for the Cuban to leave the Beijing Olympics with just a Bronze medal.

When Ugas (26-4, 12 knockouts) returned to Cuba after the Olympics, something felt different.

“I was just tired of being there in Cuba and losing,” he said this week, through a translator. “I went into a depression. I wanted a change, and I wanted to get out.”

So Ugás, who had been a Cuban amateur champion for 12 straight years, decided to leave. The difficulties Cuban athletes face defecting to the United States have been well-documented, and Ugás’ path to freedom wasn’t a clean one.

For two days, he was stuck at sea with 20 other Cubans, hoping to reach Mexico. An “extremely difficult” journey culminated with Ugás finally reaching the United States, where he faced a whole new level of challenges.

He’d left his family in Cuba, with no assurances on when he’d get to see them again. He wouldn’t reunite with his mother for nine years.

There were still ups and downs in America. He turned pro, quickly racking up 11 straight wins to start his career. Things were working out.

Then they weren’t. He lost three of his next seven fights, prompting him to walk away from the sport. He moved his training camp from Miami to Las Vegas, linking up with fellow Cuban Ismael Salas, who runs Salas Boxing Academy and has trained several world champions.

“For a long time, he has been struggling here in the United States,” Salas said this week. “We are immigrants, and every immigrant has to adjust to the way of living. Despite all of the changes he has been through, he has had success. He needs to keep working for what he loves, which is boxing.”

Since then, Ugas has risen up the welterweight ranks, repeatedly taking fights on short notice and earning wins over multiple contenders in the division. His only loss in his last 12 fights is a highly controversial decision to former titlist Shawn Porter, in a fight most boxing fans believe Ugás won.

From one Olympic medalist to another

So it’s not surprising that Lillard, the six-time NBA all-star, not only knows Ugás but specifically reached out to him on Instagram to tell him he was a fan. The two started talking, with Ugás using a translation feature to communicate with Lillard.

When Lillard was in Vegas training with the U.S. National Team, he met up with Ugas at his gym.

“He works hard,” Lillard said in a text message to the Review-Journal. “Has experienced ups and downs and continues to battle forward. Excited for him to fight at this level and against a legendary fighter like Pacquiao.”

As recently as two weeks ago, Ugas wasn’t even supposed to be fighting Pacquiao. That assignment had instead gone to undefeated unified welterweight champion Errol Spence Jr. in what boxing fans had billed as the summer’s most intriguing fight. But when doctors discovered a torn retina in Spence’s eye during a pre-fight screening, Ugás got the call to step in.

He was ready. He’d already been scheduled to fight on the undercard, and he has a history of performing well against southpaws. He also had a ready-made sparring partner, featherweight prospect and southpaw Robeisy Ramirez, already training at his gym.

Pacquiao, 42, is at the tail end of a legendary career that includes signature wins all over his resume. On Saturday night, Ugás, who was never supposed to be here, can add Pacquiao to his.

Pacquiao has 300 times more Twitter followers than Ugás. You can be sure the Cuban doesn’t care.

Here’s what he wants fans to know before he makes the walk under the Las Vegas lights.