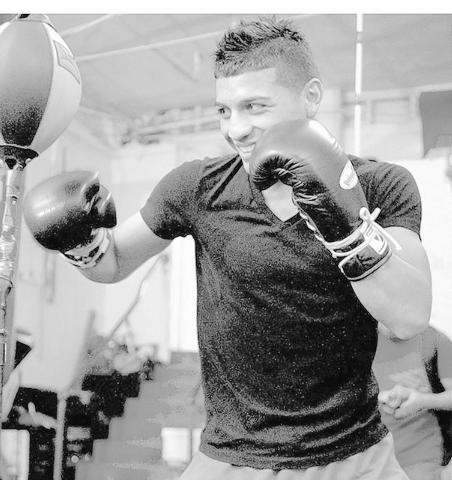 Losing usually brings about change. And after he fell to Jhonny Gonzalez in August, Abner Mares decided he had to undergo a makeover.

The former featherweight champion returns to the ring Saturday at the MGM Grand Garden, facing Puerto Rico’s Jonathan Oquendo on the Showtime Pay Per View undercard of the Canelo Alvarez-Erislandy Lara main event. And he’s coming back a different fighter.

Mares left manager Frank Espinoza. He changed trainers, hiring Virgil Hunter. He moved his training from Los Angeles to the Bay Area. He has worked on his defense and counter-punching to limit the amount of times he gets hit, something that had been a staple of his previous fights when he took more blows than necessary. He even employed a sports psychologist (he referred to him as a coach) to help his mental outlook in the ring.

“You learn from a loss sometimes more than from wins,” Mares said. “The inactivity, the year off, it made me see a lot of things, rethink a lot of things, and it obviously has rejuvenated me.”

“He’s a hungry fighter,” Mares said. “He’s coming off a fight early this year, so he has an advantage.

“I did not choose an easy fight for my comeback. But (Oquendo) is exactly what I need. I need someone who’s going to pressure me, someone who is going to take me to deep water so I can revive that Abner Mares, you know, get that anger back in me.”

■ GOMEZ COMEBACK — Mares isn’t the only fighter on the comeback trail. Veteran junior middleweight Alfonso Gomez returns to the ring for the first time since July 2012 when he faces Ed Paredes in the 10-round main event Wednesday at the Hard Rock Hotel on Fox Sports 1.

Gomez (23-6-2, 12 KOs) said he has a lot to prove. He lost a 10-round decision to Shawn Porter two years ago, and was stopped by Alvarez in 2011 in the sixth round at Staples Center in Los Angeles when Alvarez was the World Boxing Council junior middleweight champ.

“I feel blessed to have an opportunity to be in a main event against a worthy opponent such as Paredes,” Gomez said. “These two years off have not been off. You might think that a caterpillar is taking time off when he is inside the cocoon. I will fly July 9.”

Gomez, 33, had back issues that kept him sidelined into 2013. Then he broke his left wrist in a fall at home and had to pull out of his fight against Victor Ortiz in December. But he claims he is healthy and ready to fight again.

Gomez, who has fought Miguel Cotto, Jose Luis Castillo, Arturo Gatti and Jesus Soto-Karass during his career, faces an experienced tough guy in Paredes (35-3, 23 KOs). But he said his experience of fighting top-caliber competition will be the difference.

“This is his opportunity to come out of the obscurity, and I know he’s coming in to seize the opportunity,” Gomez said. “However, knowing that, I have committed myself to prevent him from capturing that moment. July 9 is my moment. I have faced fighters like him before (bigger, stronger, better records) and came out on top. This is the first time Paredes has faced someone like me.”

The first bell is scheduled for 5 p.m. JoJo Diaz, an undefeated super bantamweight and 2012 U.S. Olympian, will fight in the co-feature against an opponent to be determined.

Khan’s public relations team confirmed the arrest, according to the Daily Mail newspaper.

Khan posted a message on his Twitter account late Friday on the incident: “All nonsense (sic) please don’t believe what you read. I’m home with my family and nobody got beat up.”

Khan (29-3, 19 KOs) last fought May 3 at the MGM Grand Garden, defeating Luis Collazo in a 12-round welterweight bout by unanimous decision.