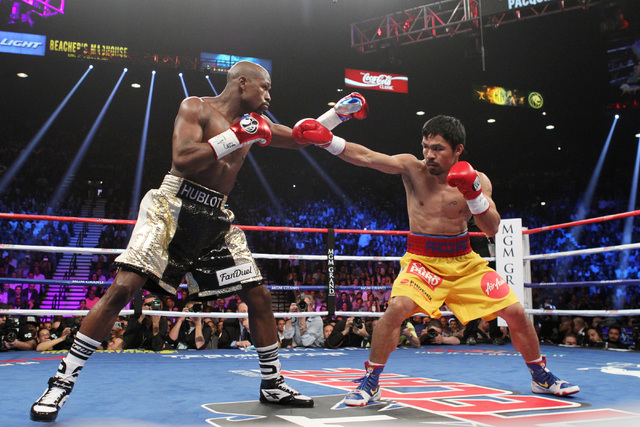 Floyd Mayweather Jr. and Manny Pacquiao feel each other out early in their welterweight unification boxing match at the MGM Grand Garden Arena in Las Vegas on Saturday, May 2, 2015. (Sam Morris/Las Vegas Review-Journal) Follow Sam Morris on Twitter @sammorrisRJ 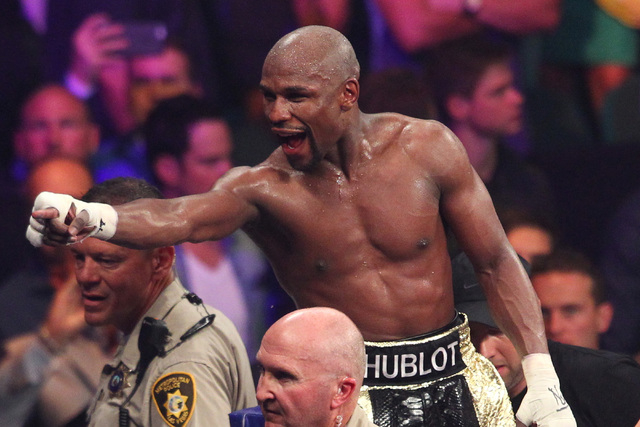 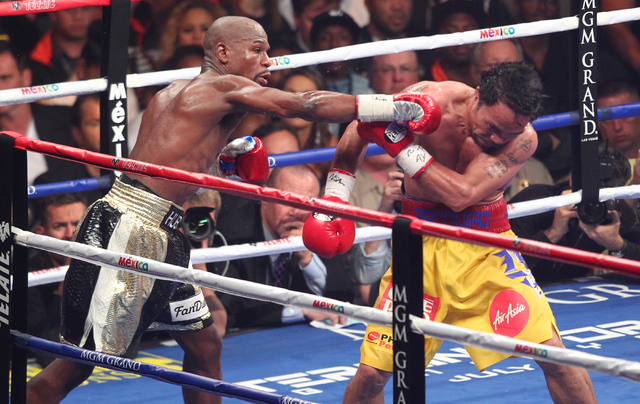 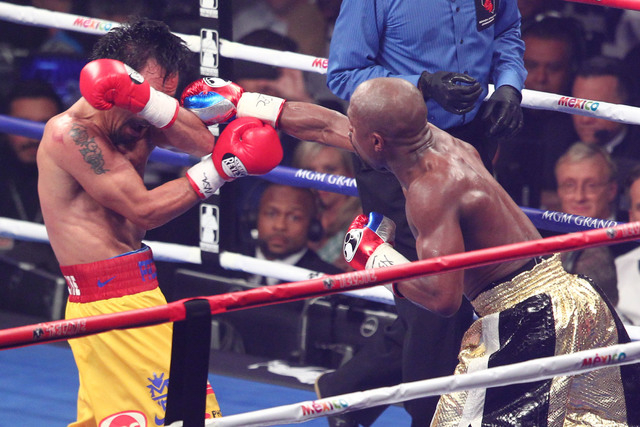 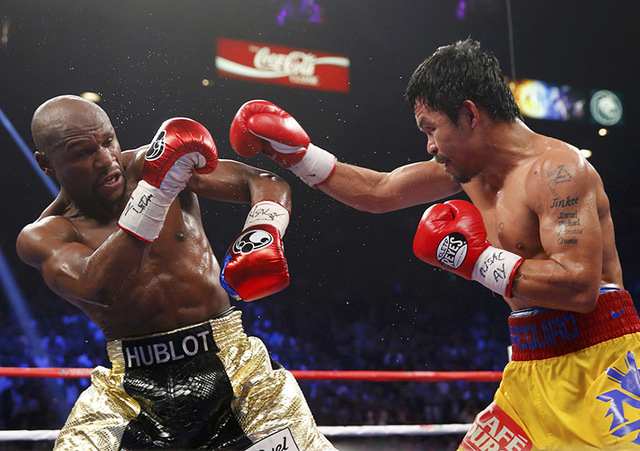 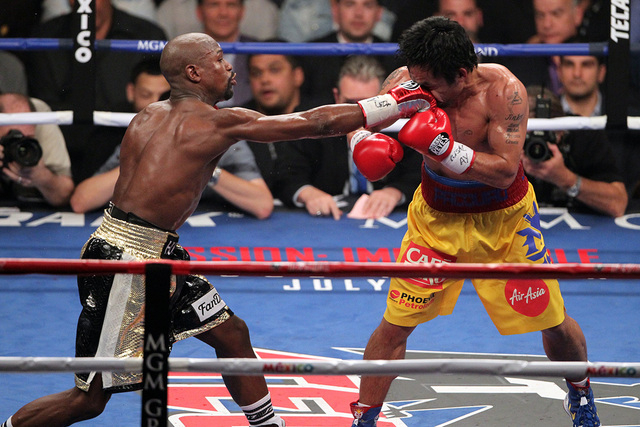 Floyd Mayweather Jr., left, lands a blow to Manny Pacquiao in the sixth round of their welterweight unification boxing match at the MGM Grand Garden Arena in Las Vegas on Saturday, May 2, 2015. (Erik Verduzco/Las Vegas Review-Journal) Follow Erik Verduzco on Twitter @Erik_Verduzco 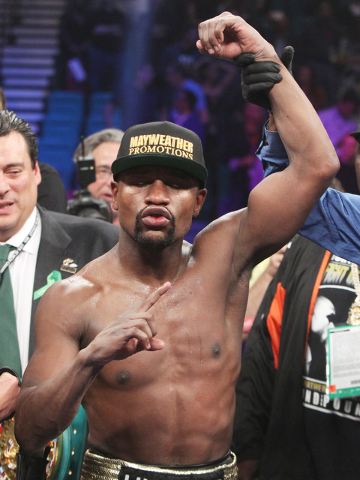 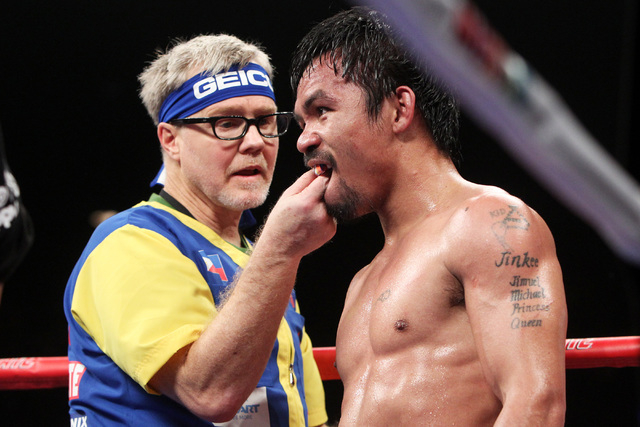 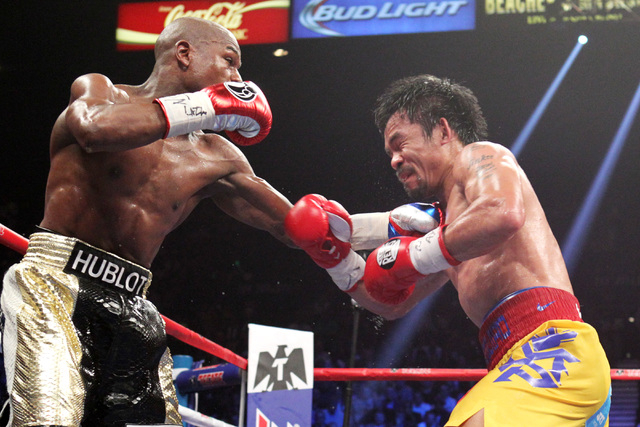 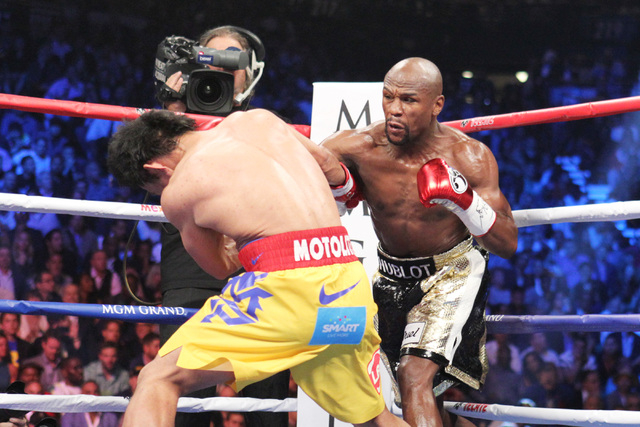 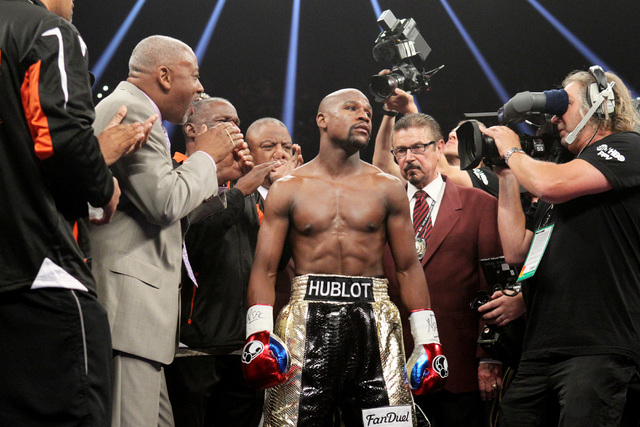 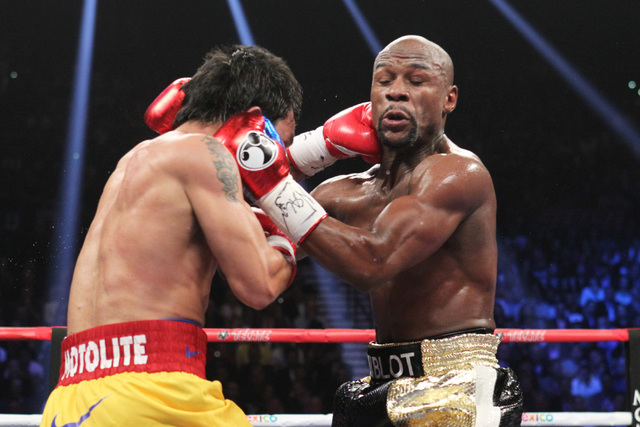 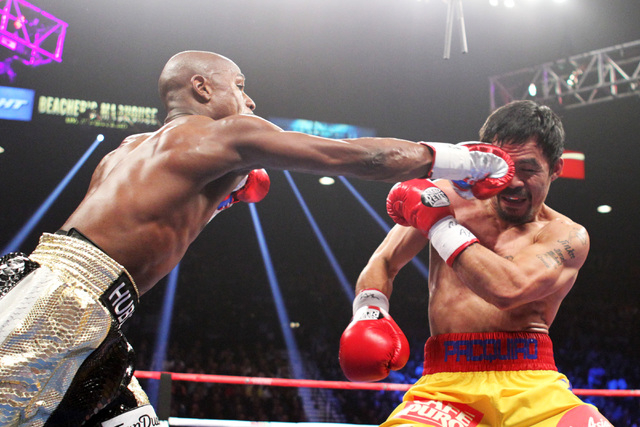 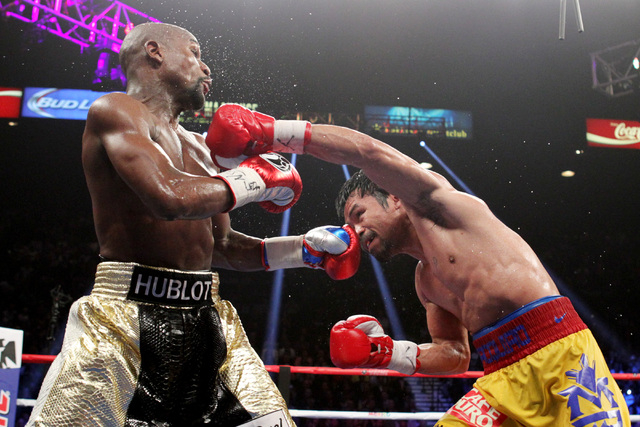 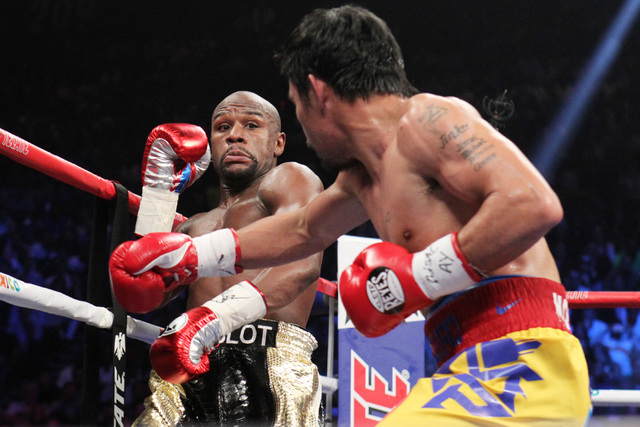 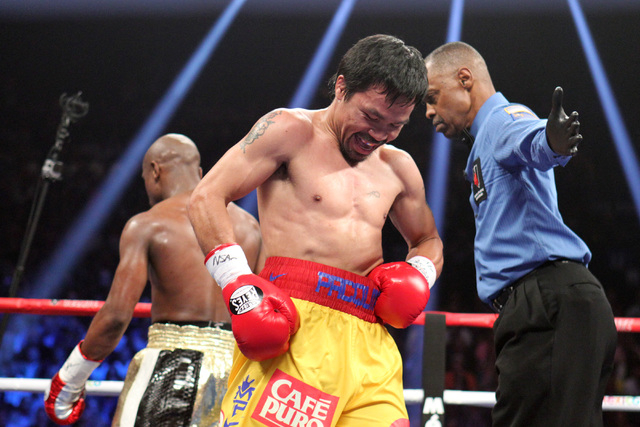 Manny Pacquiao and Floyd Mayweather Jr. head to their corners between rounds of their welterweight unification boxing match at the MGM Grand Garden Arena in Las Vegas on Saturday, May 2, 2015. (Sam Morris/Las Vegas Review-Journal) Follow Sam Morris on Twitter @sammorrisRJ 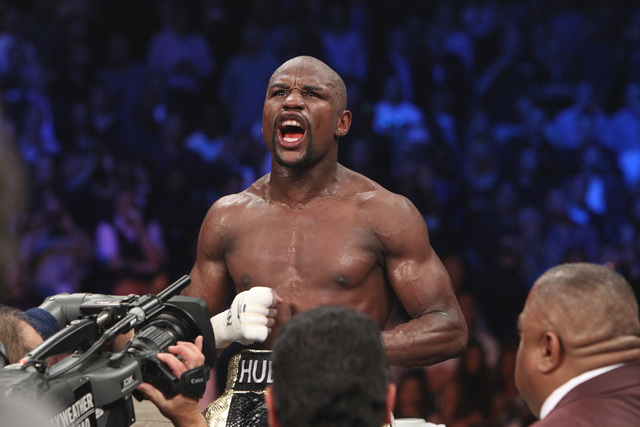 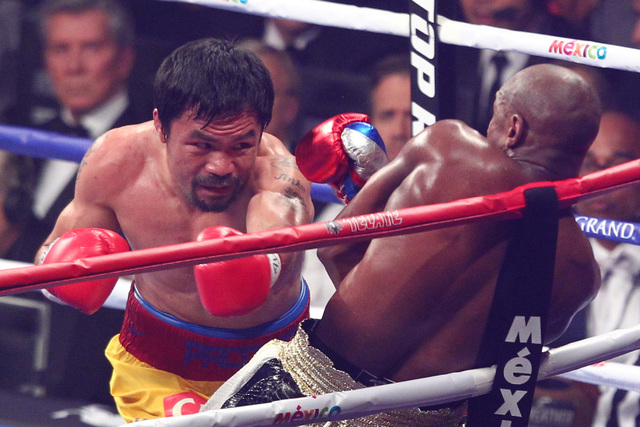 The official numbers from the May 2 megafight between Floyd Mayweather Jr. and Manny Pacquiao are in. The total is $479 million and they’re not done counting.

According to figures from the Nevada Athletic Commission, the fight had an official paid attendance of 16,219 generating a record gate of $72,198,500. In addition, more than 46,000 closed circuit seats to the fight were sold, generating an additional $6.9 million in revenue.

The previous record for a boxing gate was $20.03 million, set on Sept. 14, 2013 when Mayweather fought Canelo Alvarez at the Grand Garden.

But the big numbers were from the domestic pay per view telecast, where a record 4.4 million buys generated more than $400 million in domestic sales. The PPV figures were announced jointly by Showtime and HBO, which co-produced the telecast of the fight.

The previous records of 2.45 million buys, set in 2007 when Mayweather fought Oscar De La Hoya, and the $150 million in total sales from his fight with Alvarez, were both demolished.

“We’re very happy and we’re very blessed,” said Leonard Ellerbe, CEO of Mayweather Promotions. “We never focused on making predictions before the fight because we set the bar so high. But we’re beyond thrilled with these results and seeing Floyd continue to break records.”

“To be honest, I would have been happy with three million (buys),” Arum said. “It ended up being terrific.”

Ellerbe said that when the final international PPV sales are totalled and the other revenue streams such as sponsorships are calculated, the grand total of gross revenue could top $600 million.

The record gate was in large part to the exorbitant prices being charged. The cheapest ticket had a face value of $1,500 while a prime ringside seat went for $10,000. The closed circuit tickets sold for $150 apiece.

“It’s phenomenal for the state,” NAC chairman Francisco Aguilar said Tuesday. “It shows we can handle an event — big or small.”

There has been talk of making the commission a self-sustaining entity with no financial help from the legislature and Gov. Brian Sandoval has indicated he would ultimately like to see the NAC be on its own. Giving all or a lion’s share of the $4.3 million would go a long way toward allowing the commission, whose annual budget is $550,000, a chance to pay its own way.

“I’m optimistic we will receive additional funding for the commission’s infrastructure,” Aguilar said. “We have talked to the governor and we share his vision.” 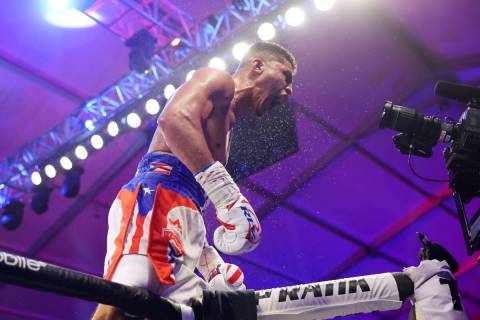 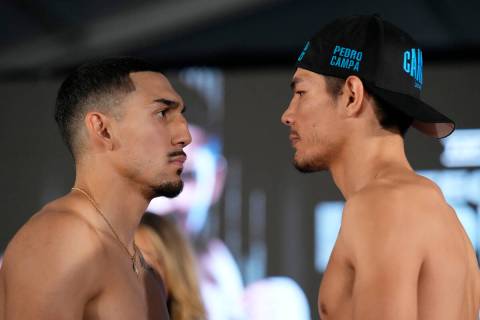 Former unified lightweight champion Teofimo Lopez is moving on from his upset loss to George Kambosos and debuting Saturday at 140 pounds against Pedro Campa at Resorts World. 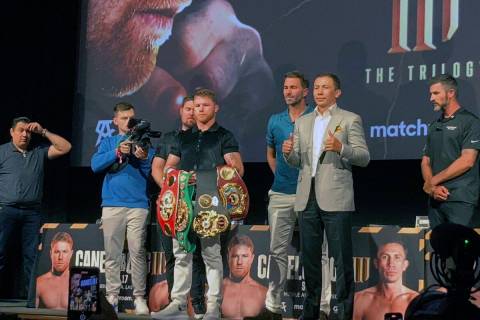