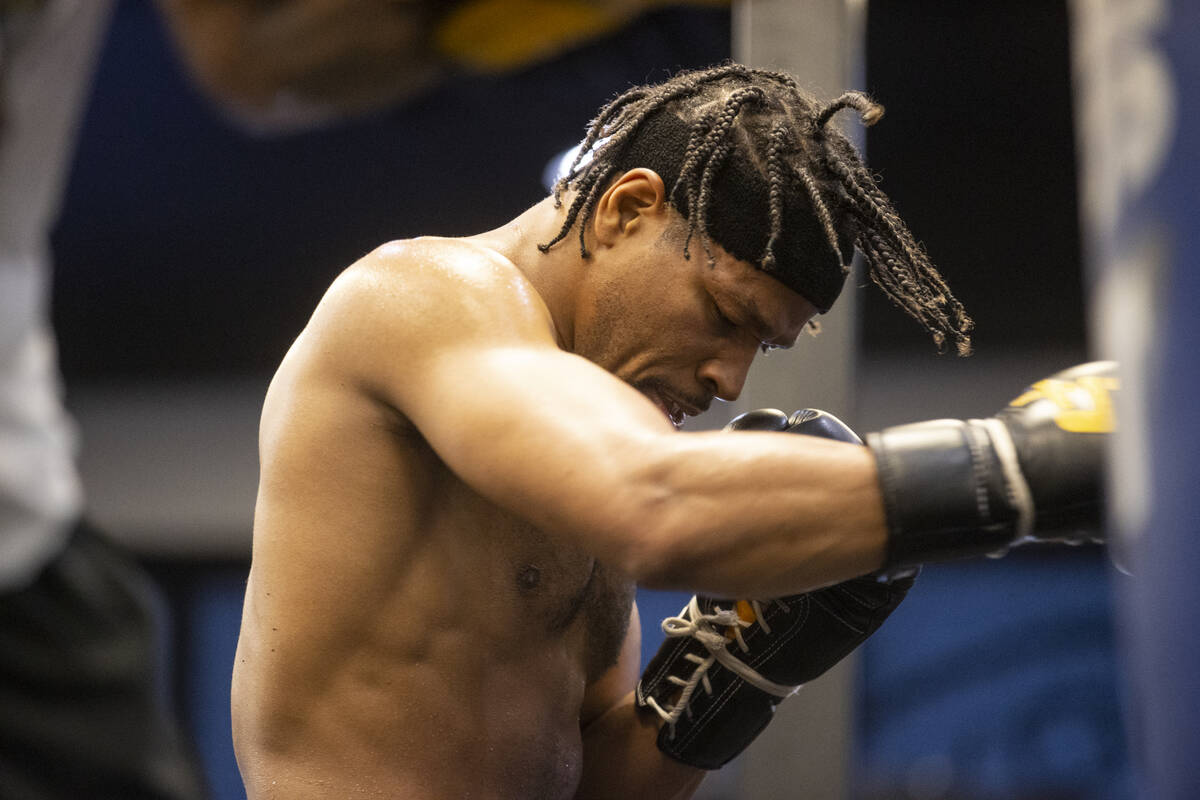 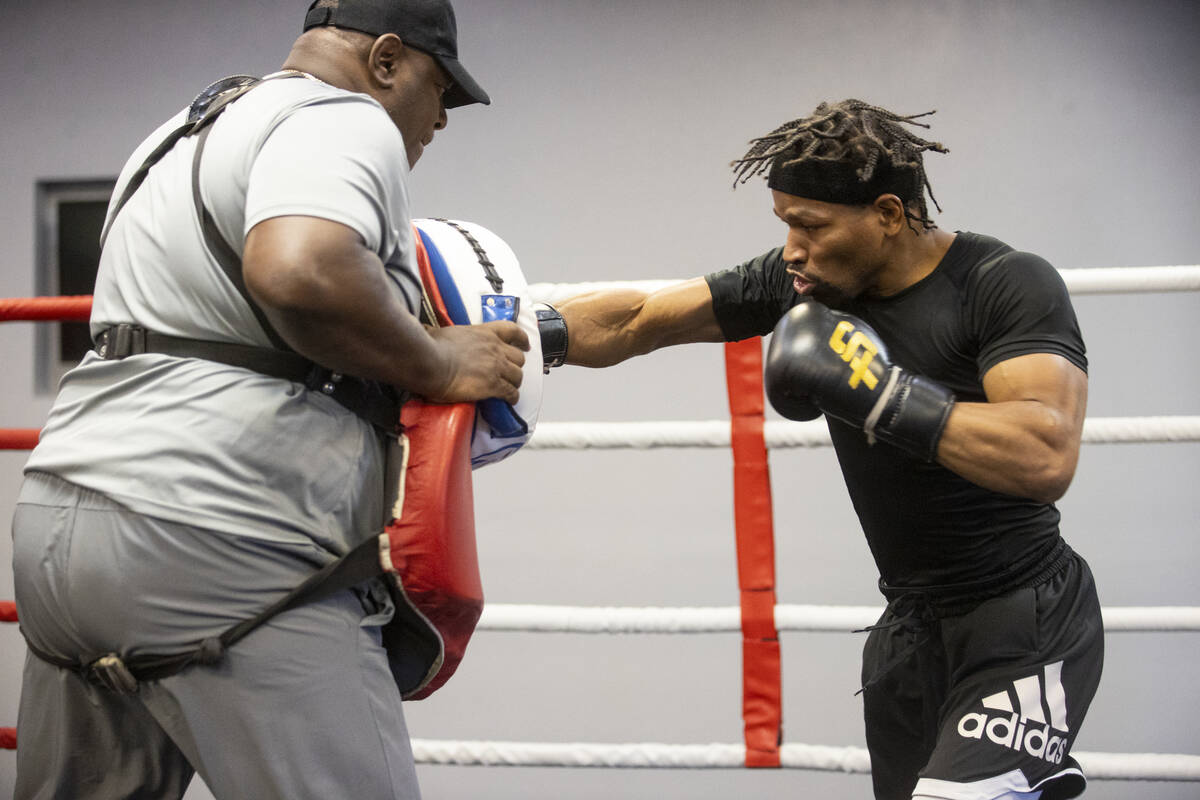 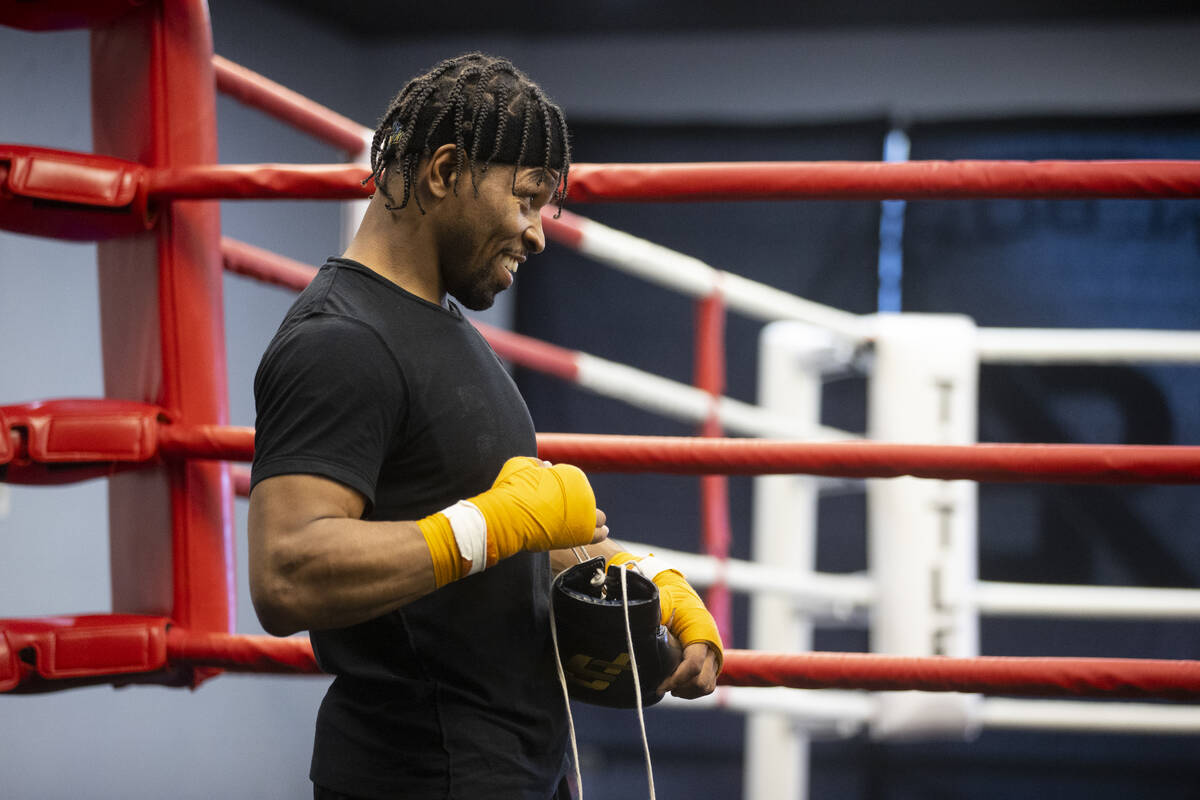 Shawn Porter gets ready to workout on the ring in preparation for an upcoming fight, at the Real Boxing gym in Las Vegas, Wednesday, Oct. 27, 2021. (Erik Verduzco / Las Vegas Review-Journal) @Erik_Verduzco 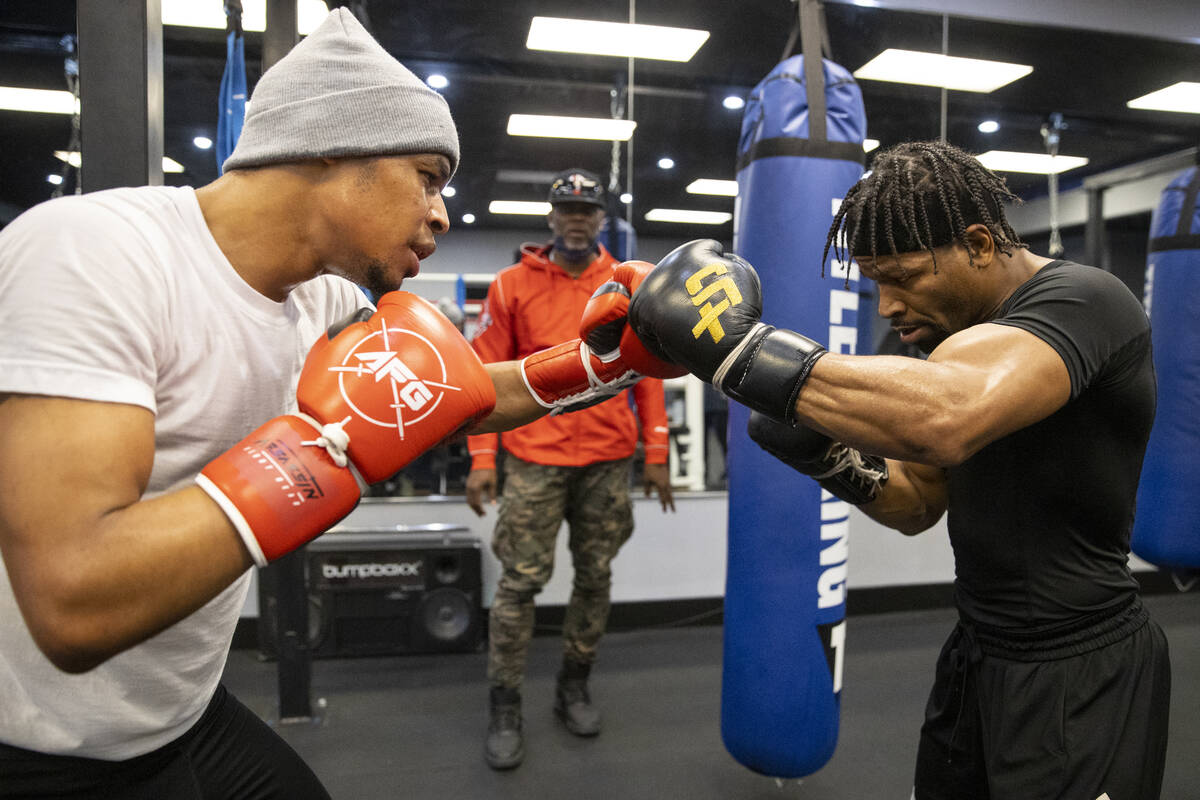 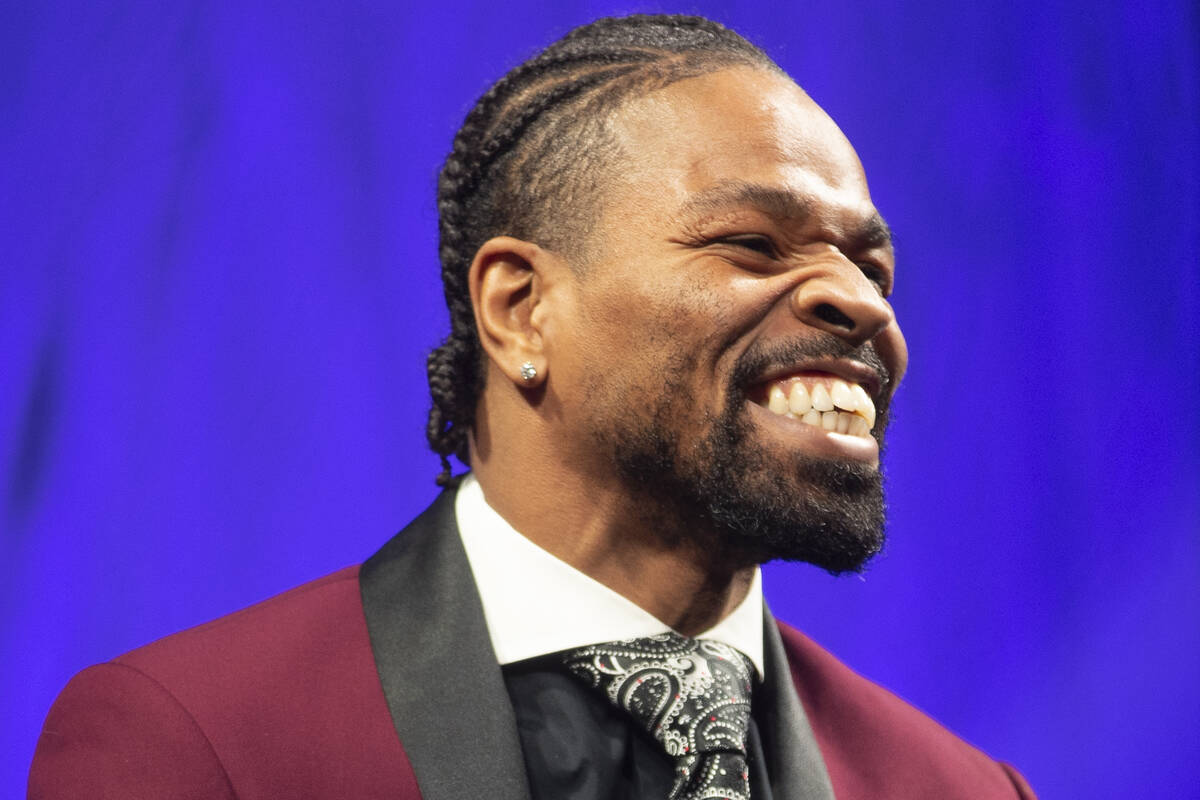 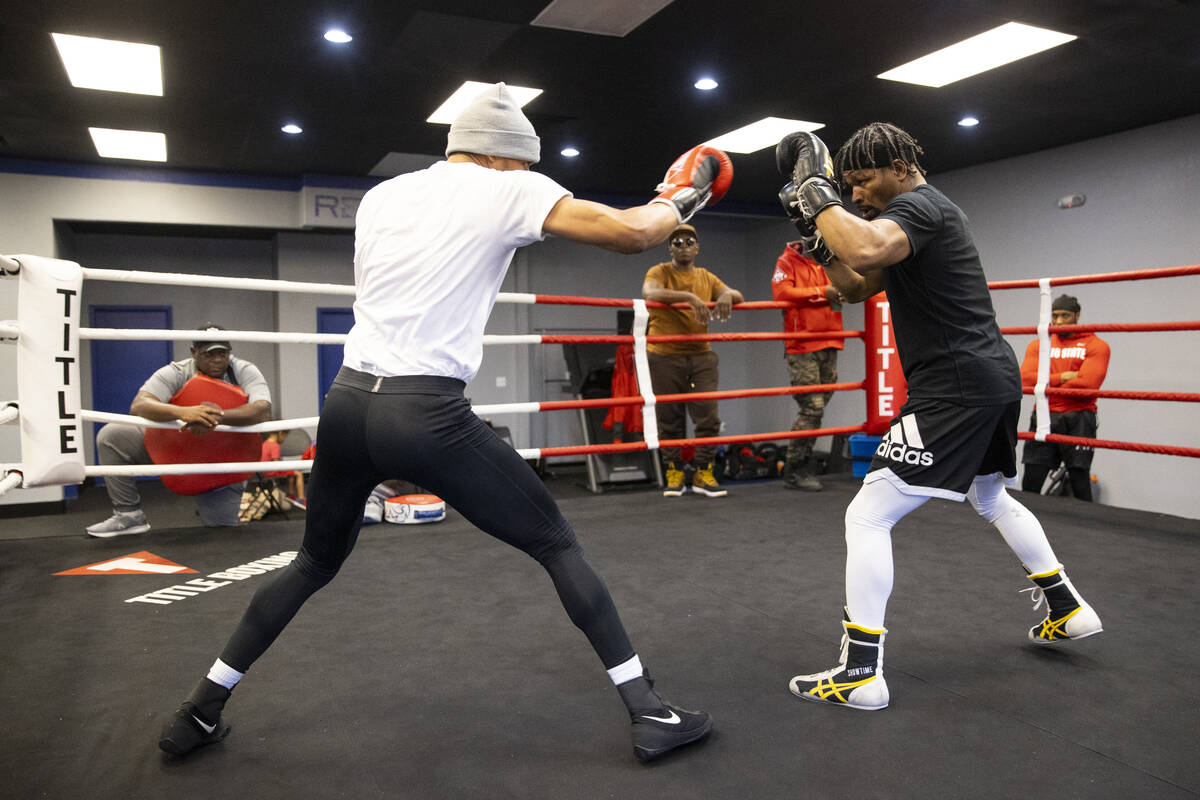 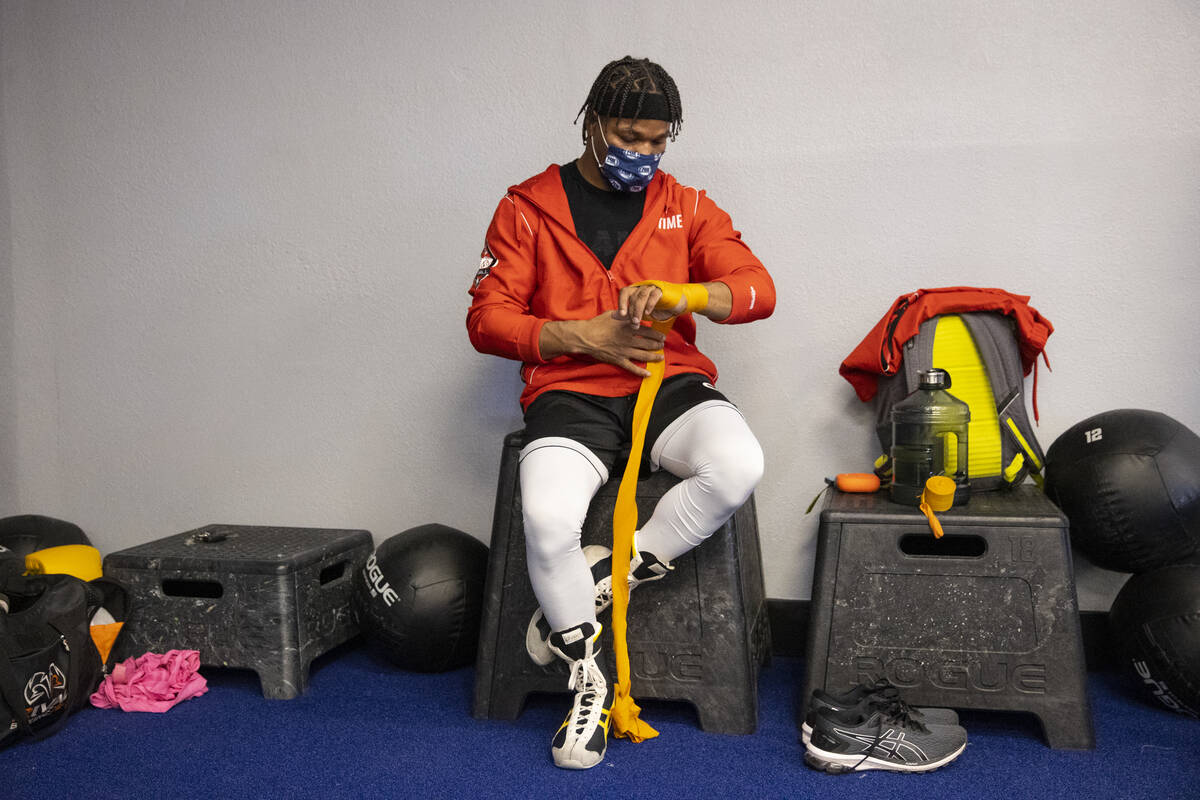 Shawn Porter wraps his hands for a workout in preparation for an upcoming fight, at the Real Boxing gym in Las Vegas, Wednesday, Oct. 27, 2021. (Erik Verduzco / Las Vegas Review-Journal) @Erik_Verduzco 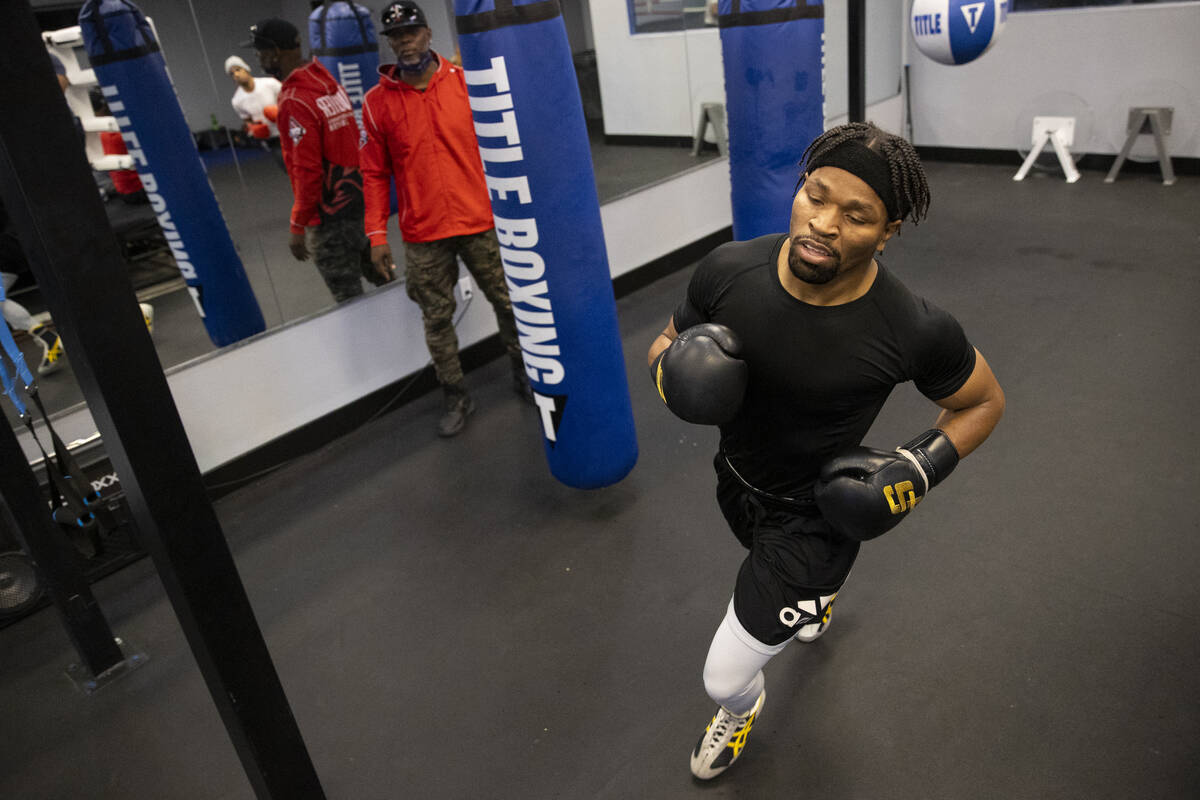 Shawn Porter runs laps around a boxing ring during a workout in preparation for an upcoming fight, at the Real Boxing gym in Las Vegas, Wednesday, Oct. 27, 2021. (Erik Verduzco / Las Vegas Review-Journal) @Erik_Verduzco 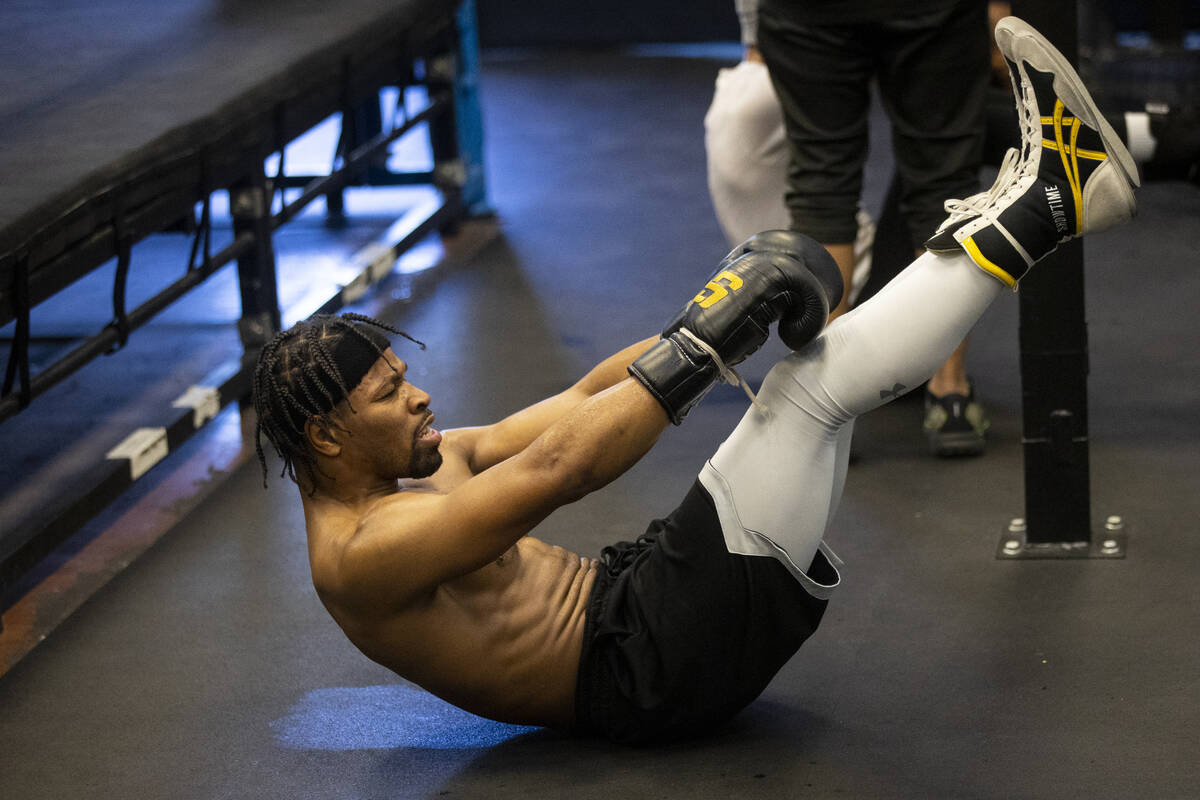 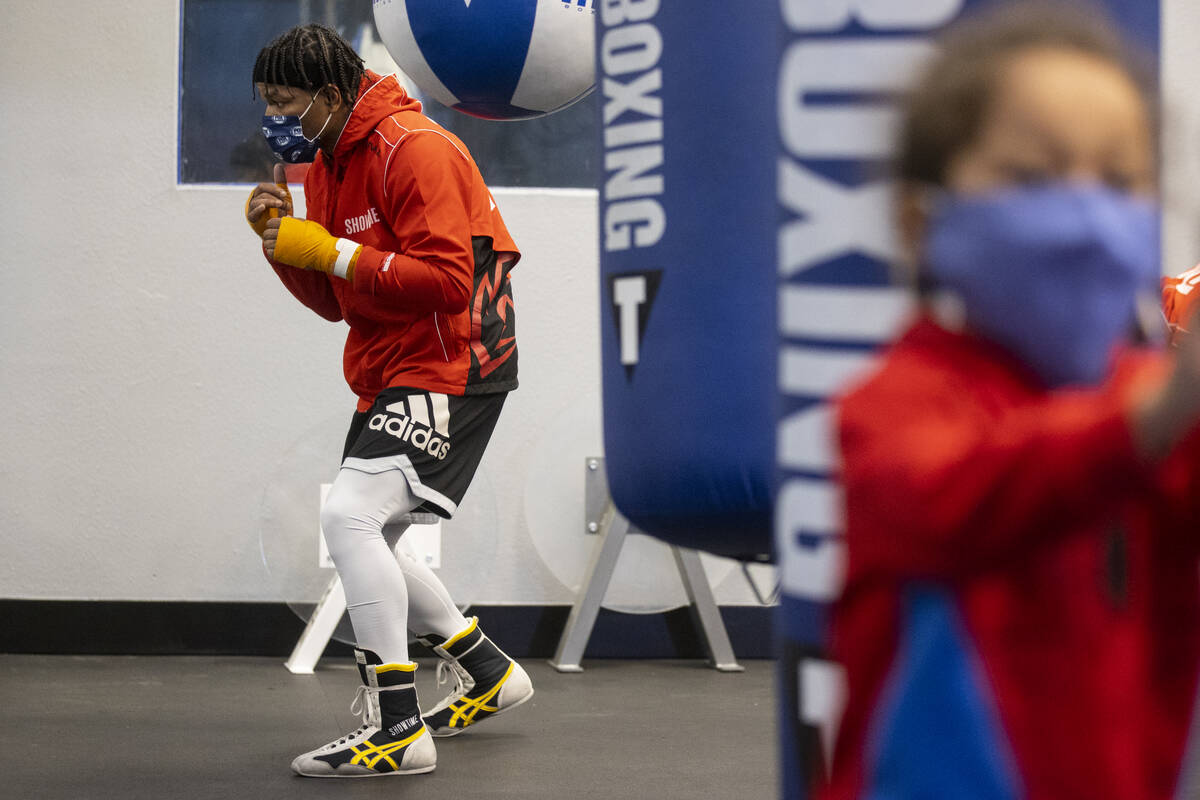 Shawn Porter, left, with his son Shaddai, 3, in the foreground, works out in preparation for an upcoming fight, at the Real Boxing gym in Las Vegas, Wednesday, Oct. 27, 2021. (Erik Verduzco / Las Vegas Review-Journal) @Erik_Verduzco 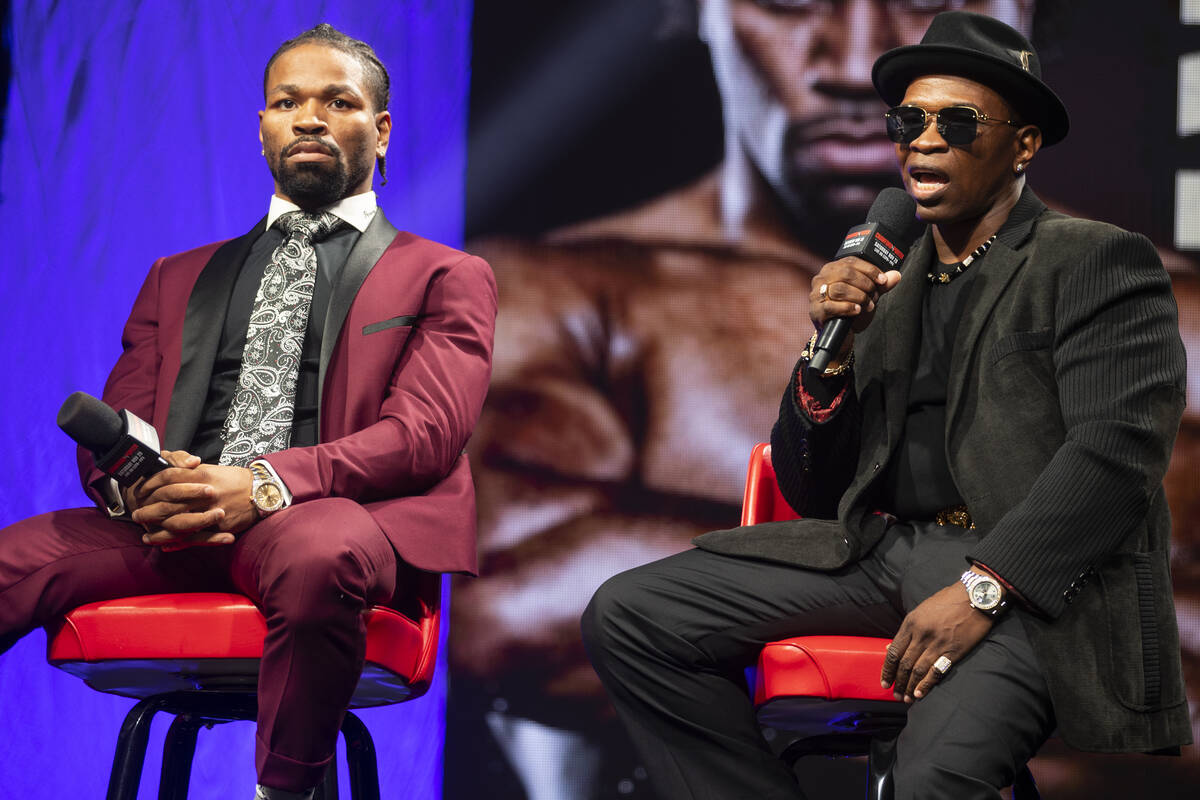 Shawn Porter isn’t deviating from his approach. His aggressive style is predicated purely on pressure, and it helped him win the welterweight world championship. Twice.

But when he began training to fight Terence “Bud” Crawford for the WBO welterweight crown Saturday, he noticed himself thinking a little differently. Thinking analytically.

“As we got going with this camp, you get back into your style and you get back to what you do and you prepare for what you prepare for, I quickly saw I’m telling myself to make adjustments. … After some time of getting back to my routine, it was like ‘This stuff doesn’t matter.’ I am who I am, I’ve got to do what I do.”

Porter (31-3-1, 17 knockouts) doubles as a boxing analyst for Premier Boxing Champions broadcasts on Fox, and is garnering a reputation as one of the brightest and sharpest minds in the sport. He’s also called fights for NBC and Triller and analyzes boxing on “The Porter Way Podcast,” which he launched last year and hosts every week.

The foray into media has given the former world champion a different perspective on the sport he’s loved since he was 6, and he believes it’s made him a better boxer as he broaches a fight with one of the world’s best pound-for-pound fighters in Crawford (37-0, 28 KOs).

If only a little bit.

“When I get here to the boxing ring and am training, the same things I’m talking about on TV now — I hold myself to a bar,” said Porter, a Cleveland native turned Las Vegas resident. “I can’t speak about it and not do it. I make adjustments. I work hard. The same way I try to tell people what they’re watching, what should be happening in the ring, I try to do it myself now.”

A natural on the mic

Broadcasting comes naturally to Porter, who’s distinguished himself during his 13-year professional career as one of the most gregarious and genuine people in boxing. He’s charismatic and comical. Refined and critical. As competitive at the desk, he says, as he is in the ring.

He isn’t sure what sparked his interest in broadcasting. Perhaps watching the likes of Lennox Lewis and Roy Jones Jr., iconic fighters who also doubled as analysts and broadcasters.

“But I’ve always paid attention, and something told me ‘I can do that,’” said Porter, who began with Fox in 2019. “And of course, the competitive side of me said I can do it better than them.”

With that said, Porter’s father, trainer and manger, Kenny, isn’t so sure that broadcasting has been good for his preparation. Sometimes, he says, the younger Porter will attempt to impose his perspective too much on a game plan.

“Sometimes, we’re doing something in the gym and he wants to tell me ‘What I saw right here in this particular situation, I need to be moving this way.’ And I said ‘OK, listen. Are you analyzing or are you boxing?’” the elder Porter said.

“Let me go ahead and be the coach.”

That formula has seemed to work so far.

With his father by his side, Porter has reached the pinnacle of the welterweight division, winning the IBF title from Devon Alexander in 2013 and adding the WBC belt in 2018 with a victory over Danny Garcia. He has danced with the best the division has had to offer, fighting Kell Brook, Adrien Broner, Keith Thurman, Yordenis Ugas and Errol Spence Jr., among others.

Eleven of his last 13 fights have been against former champions, though Crawford is of an ilk all his own.

Porter believes his style is going to allow him to dictate the pace and the tempo of the fight, which rarely happens against the skillful and powerful Crawford.

“This is going to be one that everyone remembers for a long time — and the strap is on the line,” Porter said. “Believe it or not, that doesn’t mean as much as beating Terence Crawford. There’s this glow around him. And I’m not used to sharing that glow. I’m going to take it.”