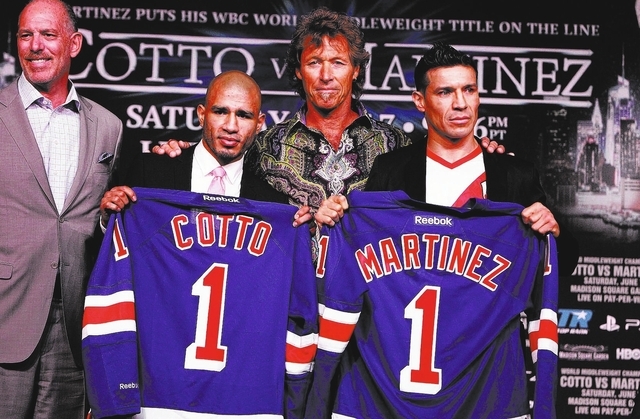 NEW YORK — No major fight goes without promotions and pictures.

But when Miguel Cotto and Sergio Martinez went to the top of the Empire State Building on Monday to promote Saturday’s World Boxing Council middleweight title fight at Madison Square Garden, there had to be some apprehension on the promoters’ part.

Given the war of words between the fighters, would Cotto try to throw Martinez over the ledge of the iconic skyscraper in midtown Manhattan, or vice versa?

Fortunately, the two played nice, posing for the camera and smiling 102 stories above the street.

But this has been far from a peaceful promotion. Both sides have jabbed at each other, whether it was Martinez accusing Cotto of demanding a 159-pound limit, something Cotto denied, or consternation over a sleeve Martinez will wear on his surgically repaired right knee, or who would receive top billing (Cotto’s name is first on the advertising, even though Martinez is the champion).

“Hate Cotto? Never,” Martinez said Wednesday at the final news conference, at the Theater at Madison Square Garden, for the showdown, which will be televised on HBO Pay Per View. “Sometimes I get upset with Cotto and some of the things he does. But, no, I don’t hate him. At the end of the day, we’re both professionals.”

Cotto said: “I’m not here to hate anybody. I just want to do my work. If he has a problem with Miguel Cotto, I don’t know about it. I don’t have a problem with anybody.”

On Monday, the 39-year-old Martinez (51-2-2, 28 knockouts) got permission from the New York State Athletic Commission to wear the supportive elastic sleeve on his knee. The fighter claims his knee is fine but that his doctor recommended he wear the sleeve as a precaution.

“I always listen to what my doctor says,” Martinez said. “But I am totally 100 percent healthy, and it’s not even an issue.”

Lou DiBella, who co-promotes Martinez, said he thinks the Cotto camp was trying to get inside Martinez’s head by making an issue of the sleeve.

“It’s interesting that Sergio has never had a stoppage because of his knee or his hand,” DiBella said. “I can’t prove anything, but were there people messing with us? Yes.”

DiBella said the NYSAC asked for an MRI of Martinez’s knee and left hand, which also required surgery last year.

“We gave them the results last week, and I think that’s why they approved the sleeve Monday,” DiBella said. “The commission was satisfied with the results.

“Ninety percent of the players in the NBA wear a sleeve. To not allow Sergio to fight without it is absurd, and I congratulate the commission for acting swiftly.”

“If he thinks it’s going to help him, fine,” Cotto said. “He can wear three or four braces. It won’t matter.”

The fight is a virtual sellout, and Cotto will enjoy the majority of the support from his fellow Puerto Ricans who have been there for him throughout his career. But Martinez scoffs at the advantage his opponent will enjoy from the stands.

“Last time I checked, they can’t fight for him,” he said.

Trainer Freddie Roach, who is working with Cotto for the second time, said his fighter will do what Julio Cesar Chavez Jr. couldn’t do almost two years ago when he fought Martinez at the Thomas &Mack Center. Martinez won a unanimous decision to regain the middleweight title.

“He’s reckless,” Roach said. “He runs all over the place. I think he left a lot of his fight in the ring when he fought Chavez. He wanted the knockout so bad, he spent 11 rounds trying, and he almost got knocked out himself in the 12th.

“I just think the wear and tear from that fight has ruined Martinez. That was his last hurrah.”