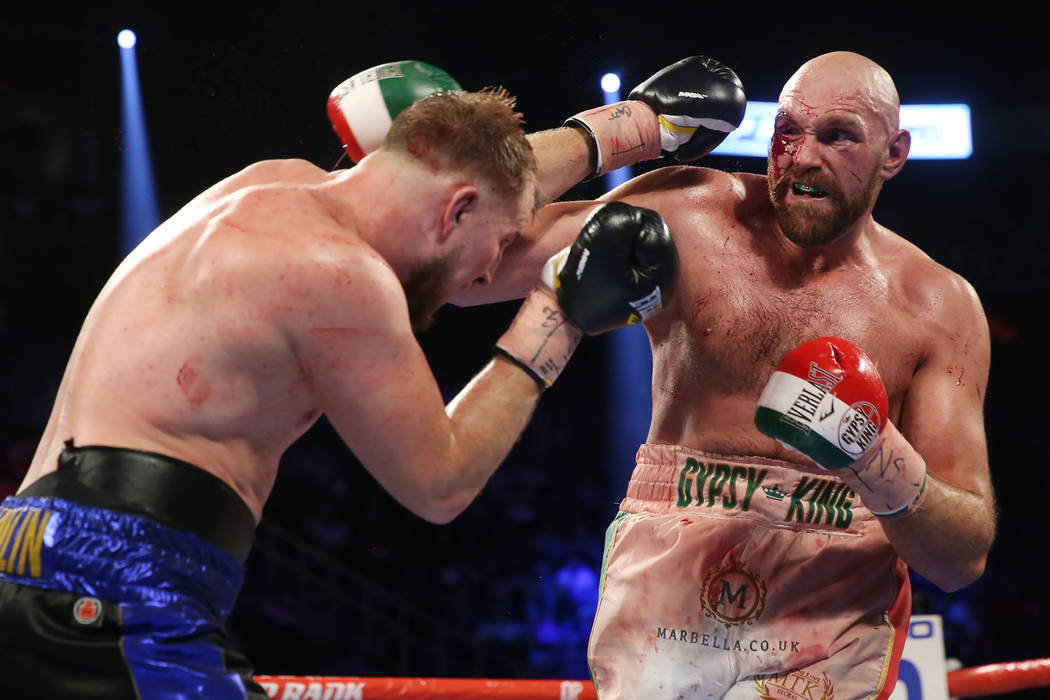 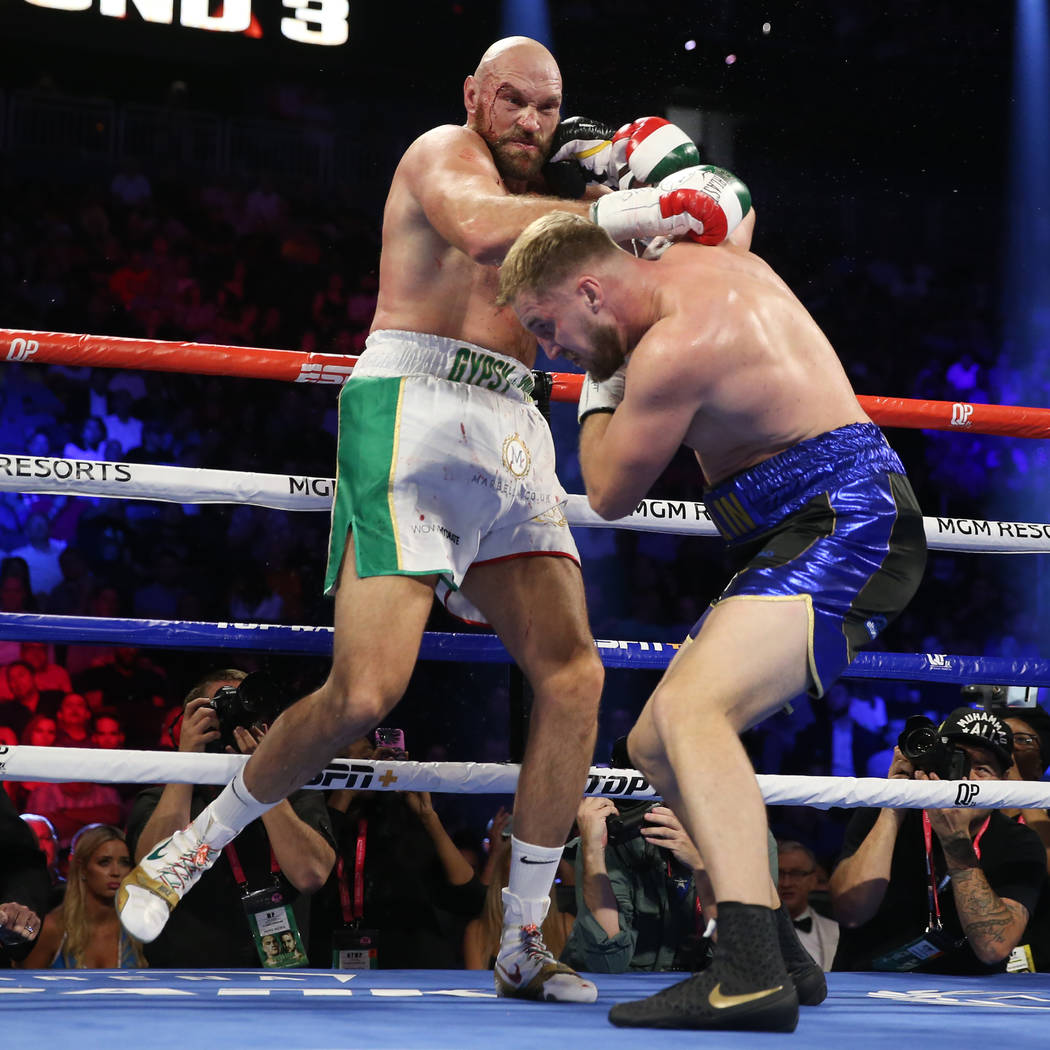 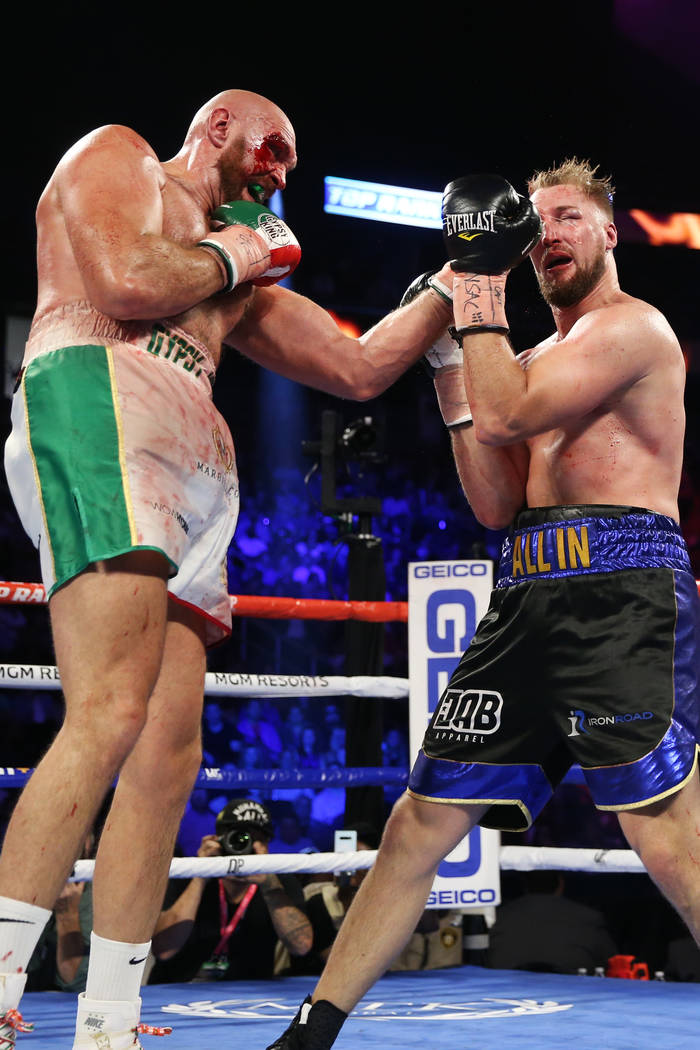 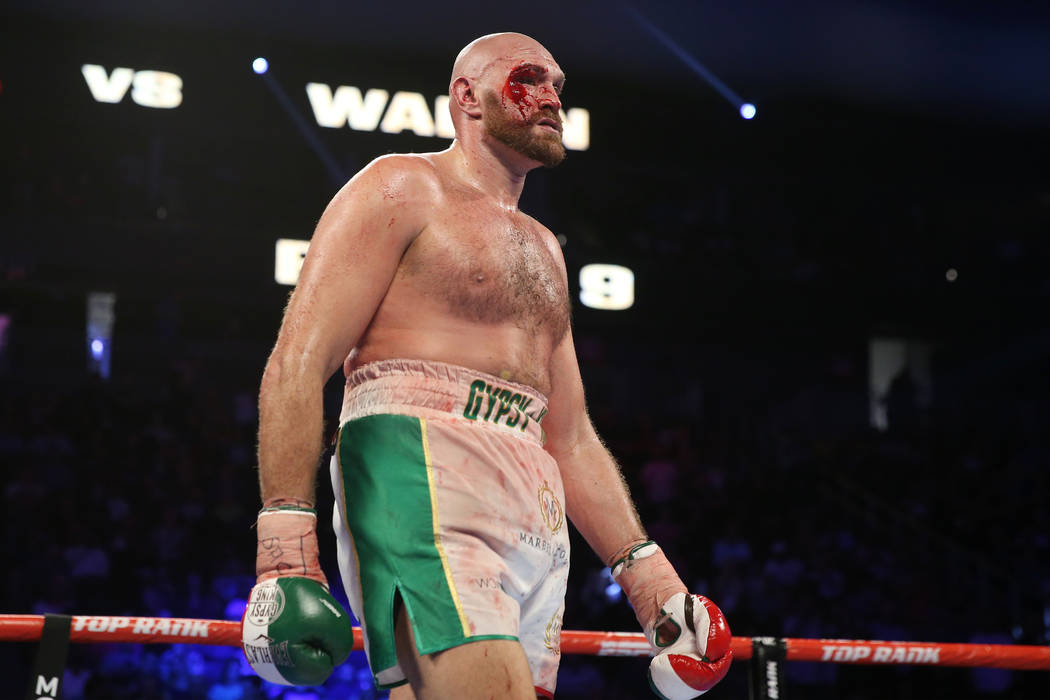 Tyson Fury walks to his corner after the ninth round against Otto Wallin in the heavyweight bout at T-Mobile Arena in Las Vegas, Saturday, Sept. 14, 2019. Fury won by unanimous decision. (Erik Verduzco / Las Vegas Review-Journal) @Erik_Verduzco 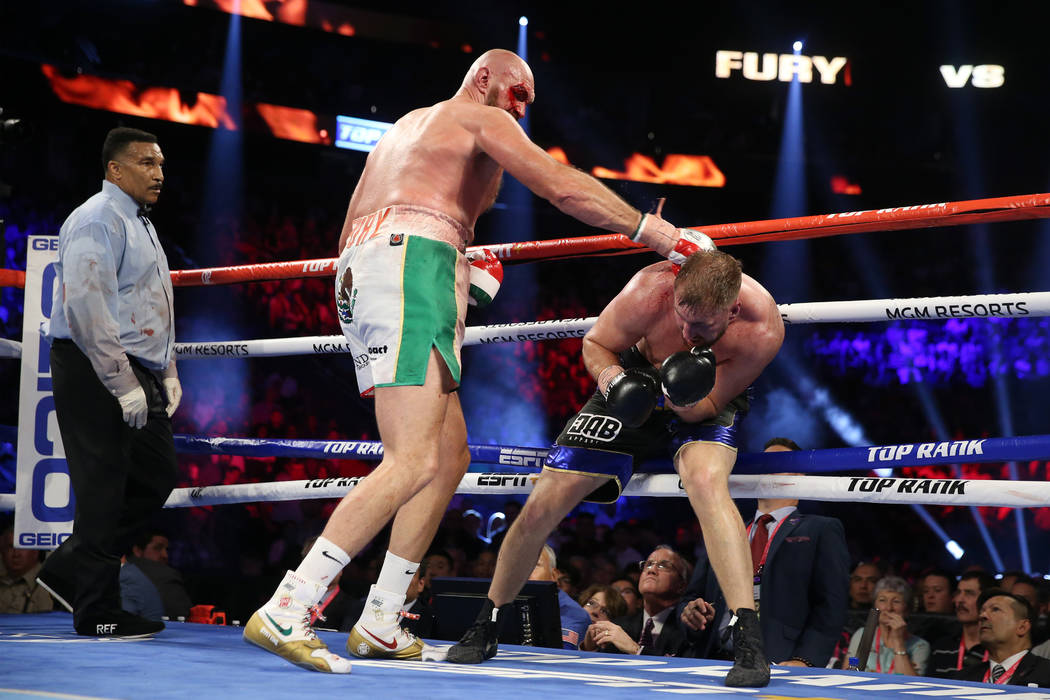 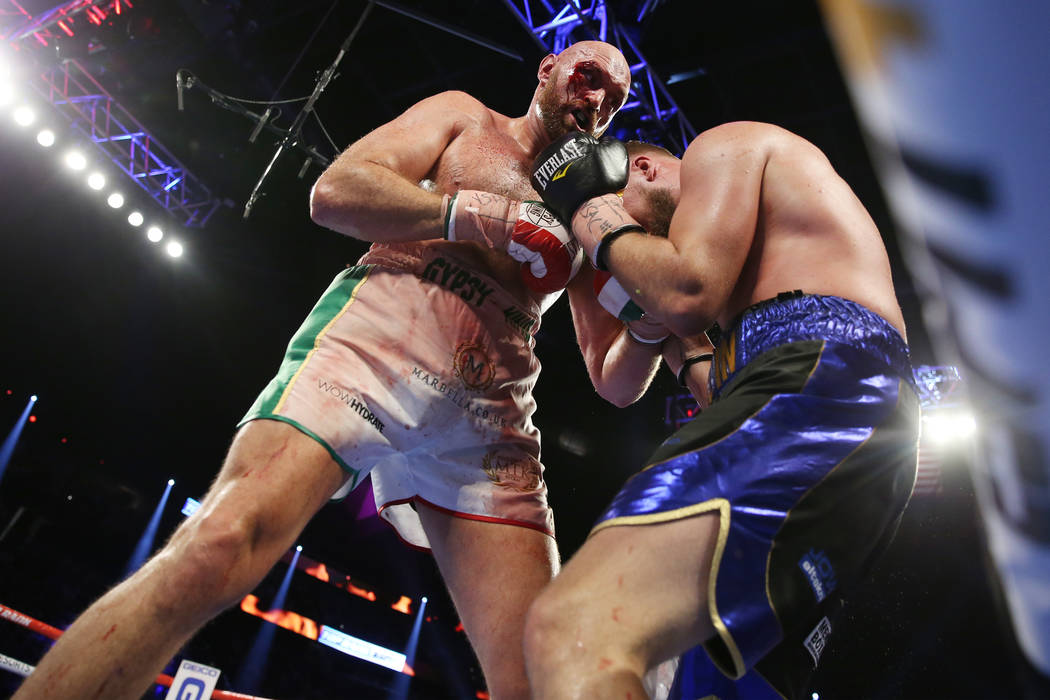 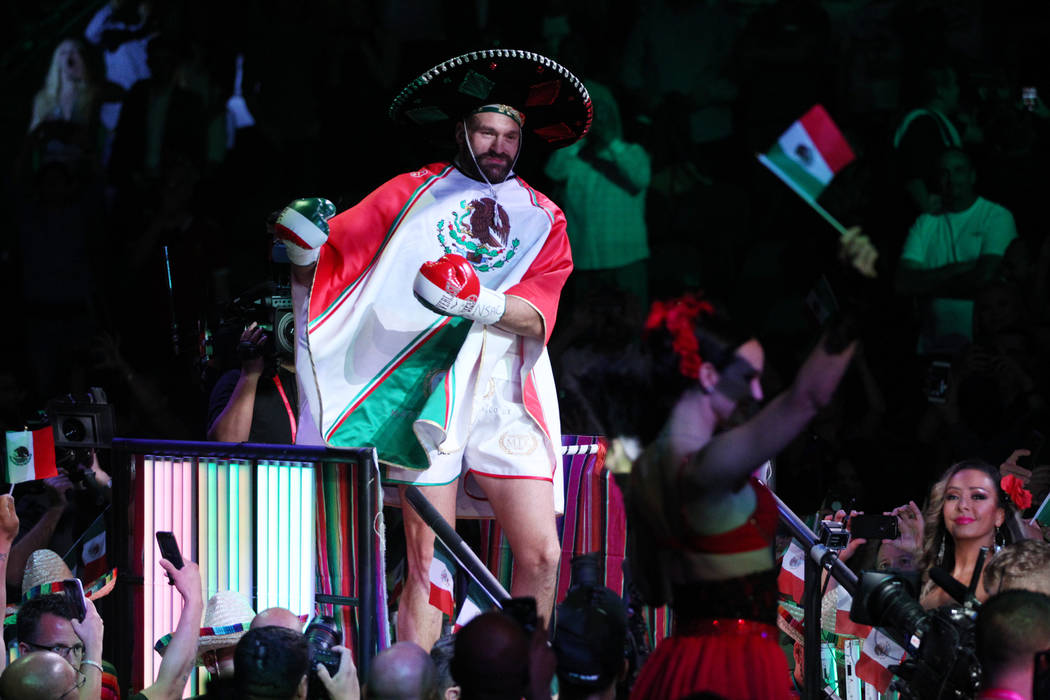 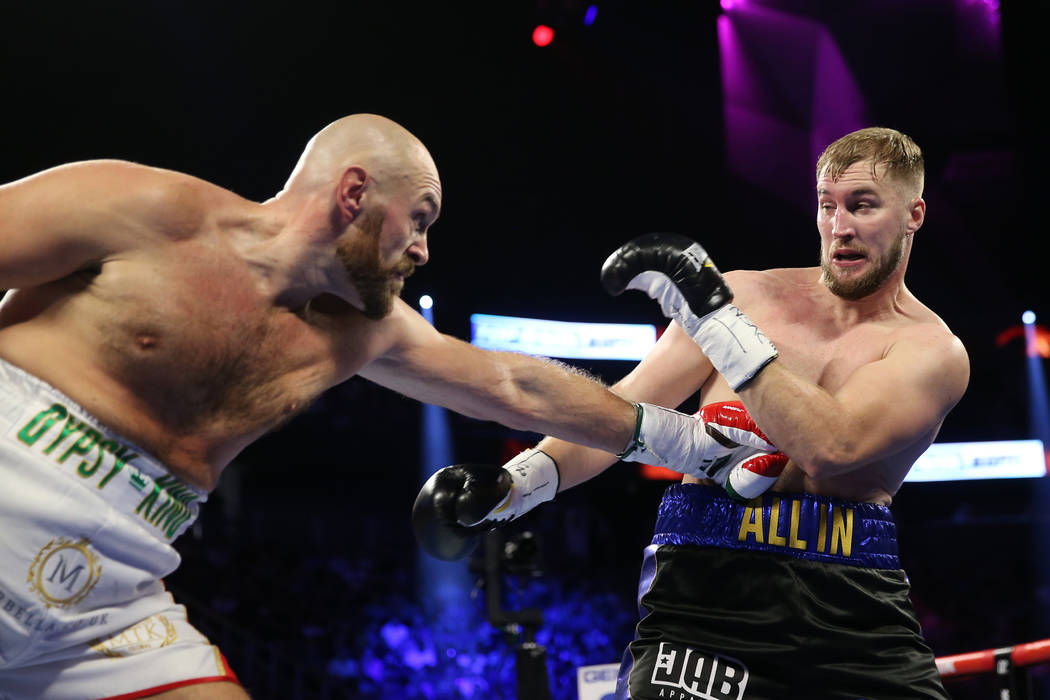 “Deontay Wilder, I want you next, bum,” Fury exclaimed in celebration. “It is all preparational. Next is the big boy.”

Fury endured an impressive effort from the underdog Wallin, then found his footing in the middle rounds and asserted his dominance in the latter rounds to win a 116-112, 117-111, 118-110 unanimous decision and preserve his undefeated record before an announced crowd of 8,249.

He’ll shift his attention once and for all to the vaunted Wilder (41-0-1, 40 knockouts), whom Fury fought to a draw in December in Los Angeles. The two are expected to fight in February in Las Vegas in one of the most highly anticipated local heavyweight fights in the last two decades.

But first “I’m going to go home and relax with the family,” Fury said.

Fury (29-0-1, 20 KOs) hadn’t been cut in the ring since 2010, but Wallin connected with a flush left jab midway through the third round to split his right brow and alter the trajectory of the fight.

All over Wallin, the canvas and referee Tony Weeks, prompting multiple stoppages by the ringside physician. Wallin pressured Fury, especially during the first half of the fight. But to no avail, as Fury continued to counter and come forward.

“I tried to hit it even more. I know it was a punch that did it in the corner over there,” Wallin said. “I was happy that he was cut, but I wish I could have put more pressure on it.”

Fury regrouped and asserted his superior skill and strength as Wallin finally succumbed to the inevitable fatigue. Fury remained active and spry throughout, throwing 651 punches to Wallin’s 334 and connected on 179 to Wallin’s 127.

“It is all heart and determination. If I can keep going, I will keep going. He’s a tough guy,” said Fury, who acknowledged that he couldn’t see out of his right eye. “I hit him with some chin shots and some body shots, and he kept coming.”

Wallin (20-1, 13 KOs) certainly earned respect, connecting on more punches than any of Fury’s foes in the 15 fights tracked by CompuBox. Wilder connected with 71 punches in their December bout, and longtime heavyweight champion Wladimir Klitschko landed 52 in his loss to Fury in 2015.

But 127 punches weren’t enough for Wallin.

“I did everything I could, I tried my best, and Tyson is a great champion,” Wallin said. “No one can question my heart or question that I am a good fighter.”

But Fury is the better fighter. Perhaps the world’s best heavyweight.

He proved that again Saturday.