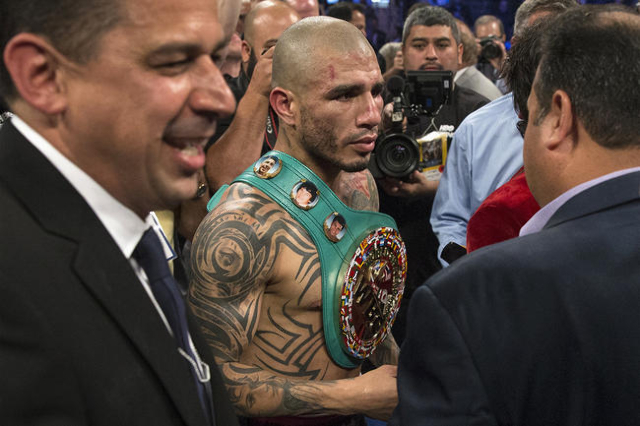 When Miguel Cotto enters the ring at Mandalay Bay Saturday against Canelo Alvarez, it will be without his World Boxing Council middleweight championship belt.

The WBC stripped Cotto of his title Tuesday morning, claiming he did not abide by its rules. The WBC demanded an additional $300,000 fee from Cotto and Cotto refused to pay that amount. Should Alvarez win the fight, whioch will be televised by HBO Pay Per View, he will be the new champion. Should Cotto win, the title will remain vacant. The scheduled 12-round fight is being fought at a catch-weight of 155 pounds.

“I agreed to ($800,000) and I was willing to pay them $125,000 more,” Cotto said Tuesday after he had his official arrival at Mandalay Bay. “Obviously, that wasn’t good enough for the WBC. But I don’t need a title. This fight sells itself. I have plenty of belts. Everybody knows what they can expect from Saul and what they can expect from Miguel.”

The WBC issued a statement Tuesday on the situation, saying: “After several weeks of communications, countless attempts and good faith time extensions trying to preserve this fight as a WBC world championship, Miguel Cotto and his promotion did not agree to comply with the WBC rules and regulations while Saul Alvarez has agreed to do so. Accordingly, the WBC must rule on the matter prior to the fight and hereby announces that effective immediately it has withdrawn recognition of Miguel Cotto as WBC world middleweight champion.

“The WBC’s decision is premised on the fact that Miguel Cotto and his camp are not willing to abide by the governing WBC rules and regulations and the specific conditions the WBC established to sanction the fight. Simply put, they are not willing to respect the very rules and conditions which applied to Cotto becoming WBC champion.”

Cotto responded: “Ask Oscar to give $1.1 million to the WBC, then wait for an answer.

“It’s not fair. They want to have four world champions in every division and they want me to pay for their mistakes? It’s not fair to me.”