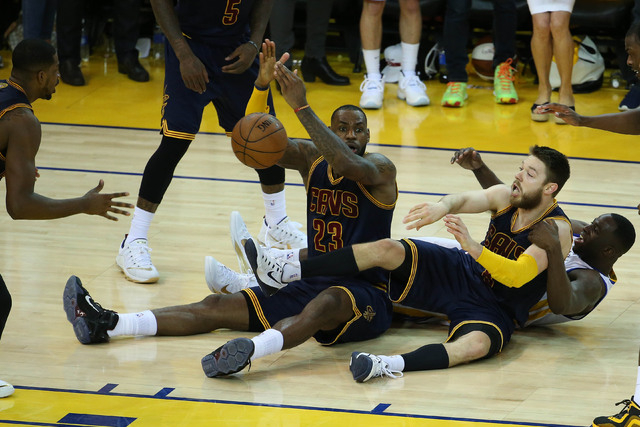 Cleveland Cavaliers forward LeBron James (23) tries to call a time out as guard Matthew Dellavedova (8) passes the ball to center Tristan Thompson (13) against the Golden State Warriors during the second half in game two of the NBA Finals at Oracle Arena in Oakland on June 7, 2015. (Bob Donnan-USA TODAY Sports) 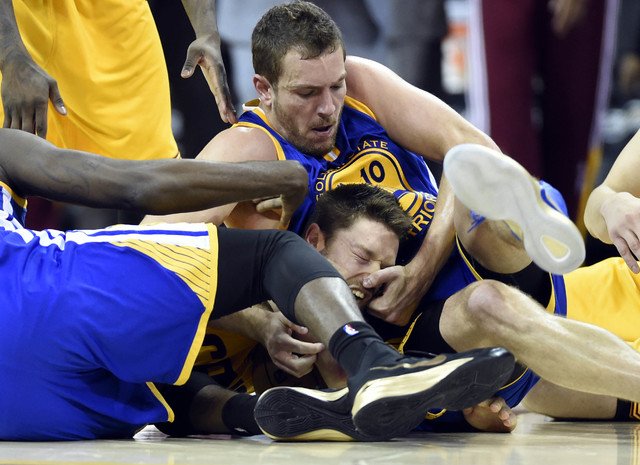 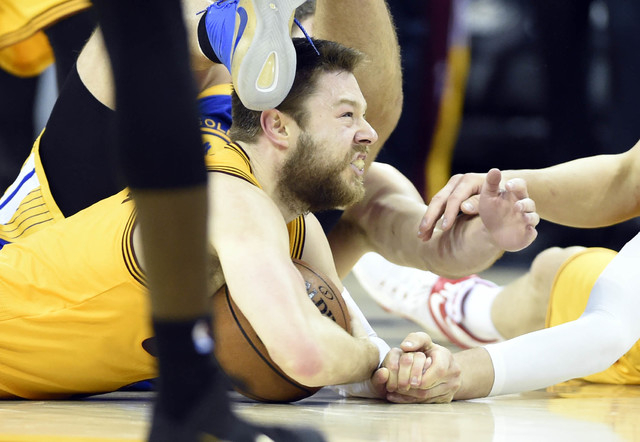 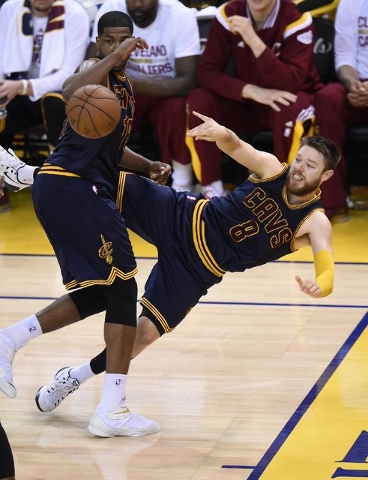 Cleveland Cavaliers guard Matthew Dellavedova (8) dives to safe a ball during overtime against the Golden State Warriors in game two of the NBA Finals at Oracle Arena in Oakland on June 7, 2015. (Bob Donnan-USA TODAY Sports)

I was chatting with Harvey Hyde, the last UNLV football coach to win here, on the radio Tuesday night when he cut to a commercial for the Vegas Summer League.

It was the usual stuff, with the voice-over guy proclaiming in an enthusiastic tone that this was a great opportunity to catch tomorrow’s NBA stars today, or whatever, and that tickets were only $25, or whatever.

A couple of hours later, I watched the end of the Warriors-Cavaliers game.

When it was over, they showed this montage of Cleveland’s Matthew Dellavedova diving on live hand grenades, and knocking assorted Warriors on their keisters, and throwing alley-oop passes, and even scoring baskets, including this one outrageous one in the lane where the Warriors knocked Dellavedova on his keister.

Two years ago the R-J’s Steve Carp wrote about the scrappy Australian trying to make the Cavaliers as a third point guard. Frankly, it didn’t look good at the time; he had gone undrafted out of little Saint Mary’s, and during the Vegas Summer League, he had made this bad pass that he probably would have gotten away with against Santa Clara or Loyola Marymount.

Still, “For a first game playing with guys I don’t really know, I thought I did all right,” Dellavedova said. “I’d like that one transition pass back, though.”

Now instead of guys he really doesn’t know, he’s playing with LeBron, and throwing him alley-oop passes on national TV.

This morning I received an email from my racing pal Tom in Indianapolis. All it said in the subject line was “Delli.”

“Funny how Matthew Dellavedova is a surprise to people in the NBA Finals,” Tom wrote. “Heck, I remember when we saw him against Gonzaga at the Orleans Arena in the West Coast Conference final.

“He had them on their heels there. Great to see a little West Coast player make it in the NBA …”

As stated on the Harvey Hyde show, tickets for the NBA Summer League at the Thomas & Mack Center beginning July 10 are on sale now. When tickets for next year’s West Coast Conference tournament at the Orleans go on sale, I’ll try to let you know before the Gonzaga fans buy them all up.