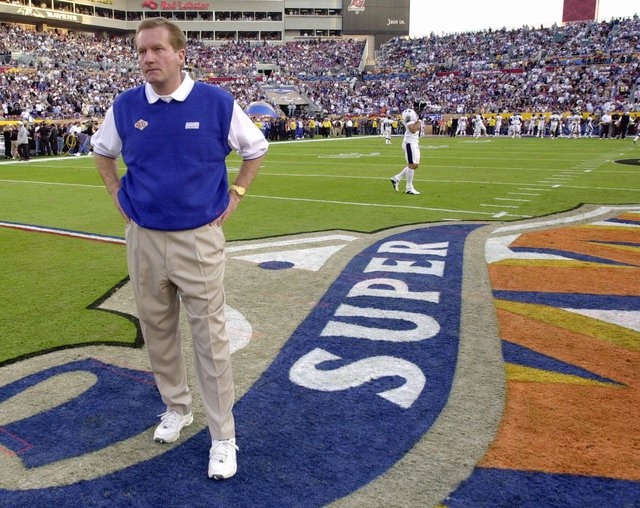 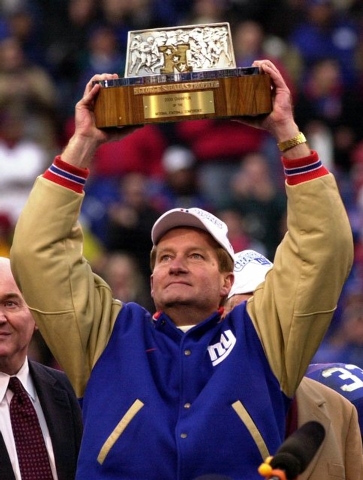 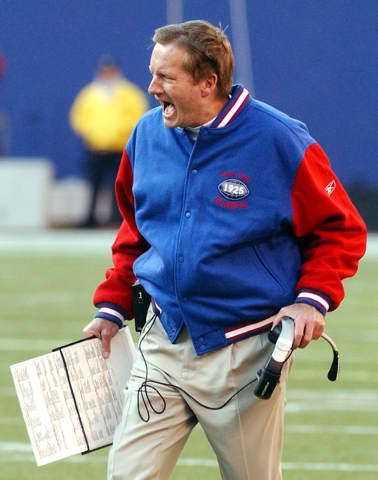 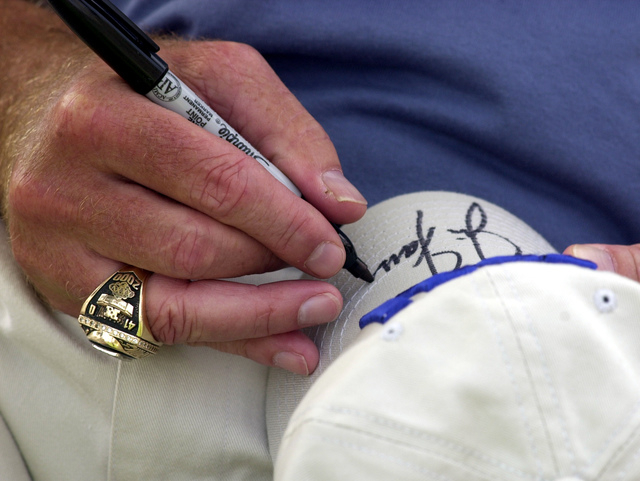 New York Giants head coach Jim Fassel wears his 2000 Super Bowl ring as he signs an autograph on a Giants cap on Thursday, July 24, 2003, during the Giants media day at the University at Albany in Albany, N.Y. (AP Photo/Jim McKnight)

Jim Fassel remembers coming out of the locker room for the second half, and a big, burly man sidled up to him on his way to the sideline.

The stranger reached out his hand and said, “Good luck, Coach.”

Fassel didn’t think much of the gesture. After all, he had a game to coach. But he stopped, paused for a second and looked back.

It was Army Gen. Norman Schwarzkopf.

Only in the Super Bowl.

Fassel, who lives in Henderson and was president and coach of the Las Vegas Locomotives of the now-defunct United Football League from 2009 to 2012, was coach of the New York Giants in 2001 when they played the Baltimore Ravens in Super Bowl XXXV in Tampa, Fla.

He’s also familiar with the geography surrounding Sunday’s Super Bowl, which will be played in East Rutherford, N.J. But Fassel said regardless of where the game is played, his advice to the Denver Broncos and Seattle Seahawks would be the same.

“The first thing I would tell them is this is not just a football game. It’s different,” Fassel said. “The routine is different. Everything changes. The NFL controls your itinerary. So you better be able to adjust.

“Football players, like all athletes, are creatures of habit. So, whichever team does the better job of adjusting gets a leg up in the game.”

Fassel said when the Giants got to the Big Game, he reached out to Super Bowl-winning coaches Bill Walsh, Mike Holmgren and Mike Shanahan and picked their brains on how to make those adjustments.

“They all said the same thing — make sure you minimize the distractions,” Fassel said. “We had a meeting on Tuesday with the players’ wives and girlfriends, and we told them that if there were any issues about tickets or travel or hotels, do not ask their husbands, but come to us.

“We had people in the Giants’ organization whose job it was to deal with those kinds of things. For the players, this was a business trip, and we wanted to keep them focused on the game.”

Ultimately, it didn’t help as the Ravens beat the Giants 34-7.

Fassel, who works NFL games for Westwood One Radio and appears on the NFL Network in addition to his weekly radio show on the local ESPN affiliate, said Sunday’s game isn’t hard to dissect.

“Seattle, in my opinion, played in the best division in football this year, the NFC West,” Fassel said. “They’ve got the record and the reputation. They lead the league in turnovers (39) and in turnover margin (plus-20). Denver is solely predicated on (quarterback) Peyton Manning. You can say what you want about this guy or that guy, but at the end of the day, it’s about Peyton Manning.

“If Seattle can force turnovers and win that battle, they’ll win. But Peyton Manning is very smart and extremely patient. He’s going to take what the defense gives him. If that means going underneath for a while until he gets a chance to go over the top and try to hit a big one, that’s what he’ll do.”

Fassel said both teams are capable of running the ball, and that may turn out to be the other storyline if the weather turns inclement. The forecast calls for temperatures in the mid-30s at kickoff with a 30 percent chance of snow.

“The temperature isn’t going to be a big deal — both teams are used to playing in cold weather,” Fassel said. “But if it starts snowing, that changes things. It’s hard to throw the ball in the snow, and it gives Seattle an edge.”

Then there’s the wind. In the old Giants Stadium where Fassel coached, the wind always had an impact. In the new MetLife Stadium, it’s not as much of a factor.

“I haven’t coached in the new stadium, but in old Giants Stadium, you had to be able to adjust to the wind,” Fassel said. “So, I don’t know how much the wind will play into things. But it is windy there, so you probably have to account for it.”

Fassel will watch the game at Anthem Country Club, where he’ll give his own pregame talk to the members. He’ll break down the game and enjoy himself, leaving the anxiety to Denver’s John Fox and Seattle’s Pete Carroll, the two Super Bowl coaches. And he’ll tell a few stories.

Like the time Gen. Schwarzkopf shook hands with him on the sideline.