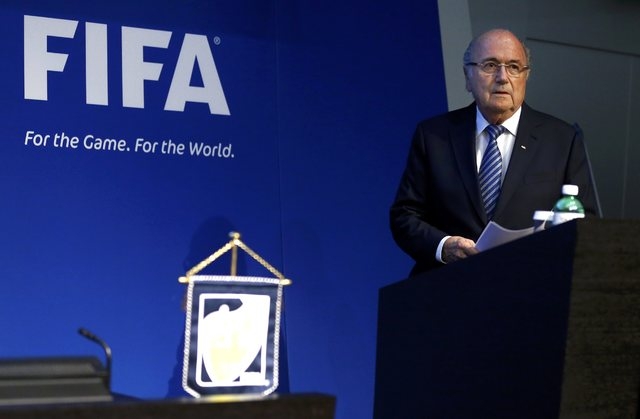 Former FIFA President Sepp Blatter FIFA arrives for a news conference at the FIFA headquarters in Zurich, Switzerland, June 2, 2015. Blatter resigned as FIFA president on Tuesday, four days after being re-elected to a fifth term. Blatter, 79, announced the decision at a news conference in Zurich, six days after the FBI raided a hotel in Zurich and arrested several FIFA officials. (REUTERS/Ruben Sprich) 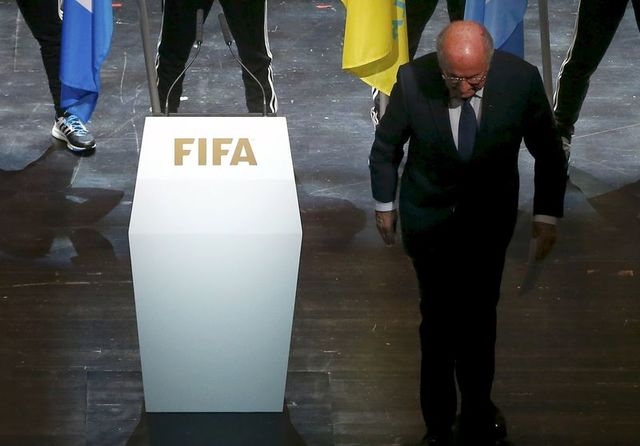 Former FIFA President Sepp Blatter leaves the stage after making a speech during the opening ceremony of the 65th FIFA Congress in Zurich, Switzerland, May 28, 2015. (REUTERS/Arnd Wiegmann) 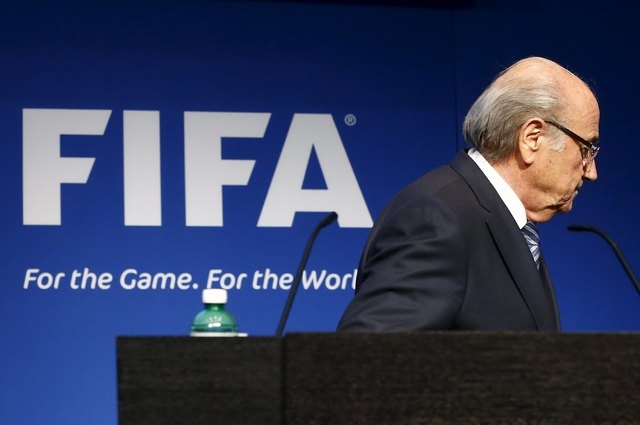 Former FIFA President Sepp Blatter leaves after his statement during a news conference at the FIFA headquarters in Zurich, Switzerland, on June 2, 2015. Sepp Blatter resigned as FIFA president on Tuesday in the face of a U.S.-led corruption investigation that has plunged world soccer's governing body into the worst crisis in its history. (REUTERS/Ruben Sprich/Files)

SAMARA, Russia — Scandal-plagued FIFA postponed the bidding for the right to host the 2026 World Cup on Wednesday and embarked on the search to find a replacement for outgoing President Sepp Blatter.

FIFA secretary general Jerome Valcke said during an event in Russia that it would be “nonsense” to start the bidding process for the tournament for the time being.

Meanwhile, FIFA said its executive committee would hold an extraordinary meeting in July to discuss “various dates options” for the Congress which will elect Blatter’s replacement.

The FBI are investigating bribery and corruption at FIFA, including scrutiny of how soccer’s governing body awarded World Cup hosting rights to Russia, which won the bidding for 2018, and Qatar, which is due to host the finals in 2022.

The extent of the turmoil engulfing FIFA was apparent in an emotional outburst by the usually composed Valcke, who said he was being destroyed by the media in his native France and gave a theatrical defense of his decision to sign off on a $10 million payment at the center of the U.S. bribery investigation.

Waving his pen in front of journalists, a visibly impatient Valcke asked: “You want me to take this pen and to hit my head and say ‘Hey! I have been stupid, I should have asked many more questions?”

“You have decided that after Blatter I have to be next head to be cut?” Valcke said at a news conference in the Russian city of Samara, one of the 2018 host venues.

Blatter tendered his resignation on June 2, four days after having been re-elected for a fifth term.

He wants to remain in office until his successor is elected in order to carry out reforms at FIFA. But there have been widespread calls for him to step down at once given the gravity of the crisis facing the 111-year-old organization.

His announcement came less than a week after Swiss police staged a dawn raid on a luxury hotel in Zurich and arrested several officials on corruption charges filed by U.S. prosecutors in New York.

On the 2026 World Cup, Valcke said: “Due to the situation, I think it’s nonsense to start any bidding process for the time being. It will be postponed.”

The decision on who hosts the 2026 finals had been due to be made in Kuala Lumpur in 2017.

Russian Sports Minister Vitaly Mutko said he saw no threat to Russia hosting the cup in 2018 and its bid was in line with the law.

Valcke, Blatter’s right-hand man, said Russia’s plans were on track and there had been nothing in its bid to suggest it was not in line with the regulations.

In Paris, UEFA president Michel Platini, holding his first news conference since Blatter’s resignation, welcomed the decision to postpone the bidding for 2026.

“It’s normal. There was a process that was launched for a vote in 2017,” said Platini, who has become a leading critic of Blatter and FIFA. “There is no leadership at the moment, so it’s normal that it’s suspended. It’s good.”

The German Football Association meanwhile came up with a radical plan for reform of FIFA that is likely to be resisted by many of FIFA’s members outside Europe.

Its president, Wolfgang Niersbach, said Blatter was not doing himself or soccer any favors by staying on.

Niersbach demanded a clean-up at FIFA, with an end to corruption and greater transparency. He also said FIFA’s voting structure should be based on the “size and sporting relevance” of its member federations.

At present, each of FIFA’s 209 members has a vote, giving soccer powerhouses Germany and Brazil the same influence as tiny Pacific islands.

On Blatter’s replacement, FIFA would not confirm a report by the BBC that the election would take place on Dec. 16 in Zurich.

Last week, Domenico Scala, head of FIFA’s audit and compliance committee and the man responsible for overseeing the election, said it could take place any time between December and March. Four months’ notice are needed for a presidential election to be held.

“It requires an extraordinary Executive Committee that needs to confirm a date and agenda for the extraordinary elective Congress,” a FIFA spokesperson said in a statement to Reuters.

“This extraordinary Executive Committee will convene in July, the precise date to be confirmed within this week. For this extraordinary elective Congress (to elect Blatter’s successor) there are currently various date options for discussion.”

Jordan’s Prince Ali Bin Al Hussein, who lost to Blatter in the election, is tipped as a possible candidate while Chung Mong-joon, the billionaire scion of South Korea’s Hyundai conglomerate, is also weighing up a bid.

In an early indication that the FIFA scandal is likely to have wider legal repercussions, the Dutch city of Eindhoven said it was considering suing FIFA to recover 1.5 million euros spent on the Dutch/Belgian bid for the 2018 cup.

A lawsuit could follow if the campaign is found to have been tainted by corruption, said spokeswoman Corine van der Putten.