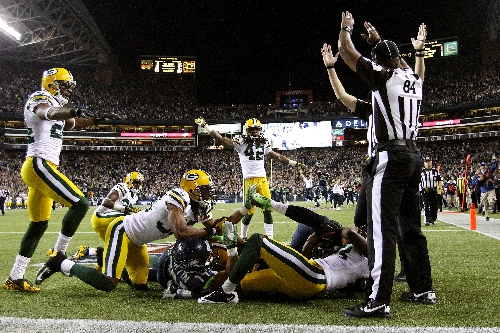 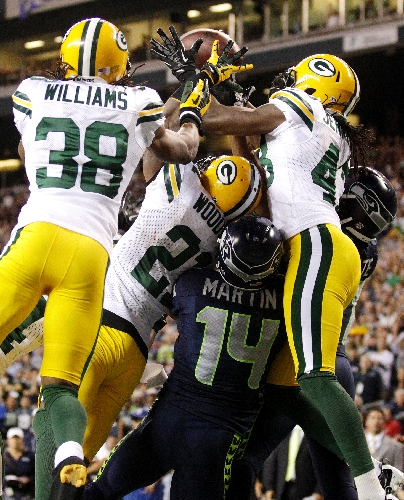 SEATTLE – Golden Tate shoved a Green Bay defender out of the way, wrestled another for the ball and was awarded a disputed touchdown on the final play. But it was another 10 minutes before the game actually ended, when the Seattle Seahawks and the stunned Packers were called back on the field for the extra point.

Just when it seemed NFL coaches, players and fans couldn’t get any angrier, along came a fiasco that trumped any of the complaints from the weekend. The Seahawks’ 14-12 victory featured one of the most bizarre finishes in recent memory, and was certain to reignite frustrations over the locked-out officials.

“Don’t ask me a question about the officials,” Green Bay coach Mike McCarthy said. “I’ve never seen anything like that in all my years in football.”

“I know it’s been a wild weekend in the NFL and I guess we’re part of it now,” he said.

Russell Wilson threw the 24-yard touchdown pass to Tate. The crew of replacement officials agreed that Tate caught the pass.

“We both had possession of it. I don’t even know the rule but I guess the tie goes to the receiver,” Tate said.

Asked later if he got his hands on Wilson’s pass first, Tate wasn’t so sure.

Wilson scrambled from the pocket and threw to the corner of the end zone as the clock expired. Tate shoved Green Bay’s Sam Shields out of the way, then wrestled with Jennings for possession. It was ruled on the field as a touchdown and after a lengthy review, referee Wayne Elliott came out from under the hood and announced “the ruling on the field stands” and CenturyLink Field erupted in celebration.

Wilson’s heave came at the end of a final frantic drive after Seattle had previously missed on a fourth-down attempt from the Green Bay 7 with two minutes left. The turnover on downs appeared to end Seattle’s hopes and cap an impressive second-half comeback by the Packers and Aaron Rodgers, who was sacked eight times – all in the first half.

Elliott told a pool reporter after the game that the play was ruled as simultaneous possession that was confirmed by the replay official.

“They both possessed it,” Elliott said.

The Packers were far from convinced that Tate had possession. Jennings said he had the ball pinned to his chest the entire time. A handful of Packers players began venting on their Twitter accounts right after the game, posting protest messages to their followers – many of them too profane to print. Offensive lineman T.J. Lang even challenged the NFL to “fine me and use the money to pay the regular refs.”

“Just watching in the back room, I think if you asked Golden Tate to take a lie detector test and ask him did he catch that ball or did M.D. catch that ball, M.D. caught that,” Packers wide receiver Greg Jennings said. “It was clear as day … at least that is what my eyes saw.”

Seattle instantly celebrated while the Packers argued with anyone in a striped shirt. Both teams were eventually shoved to the sidelines as Tate stomped through the end zone in celebration. Following the review, Elliott’s announcement sent the stadium into delirium and even more confusion ensued until the teams finally returned to the field for the extra point.

“From what I understood from the officials, it was a simultaneous catch. Tie goes to the runner. Good call,” Seattle coach Pete Carroll said.

Rodgers had quite a different opinion.

“It was awful. Just look at the replay. And then the fact that it was reviewed, it was awful,” he said. “That’s all I’m going to say about it.

“We shouldn’t have been in that position.”

It was Tate’s second touchdown of the game after catching a 41-yard TD in the second quarter to give Seattle a 7-0 lead. He finished with three catches for 68 yards, while Wilson was 10 of 21 for 130 yards.