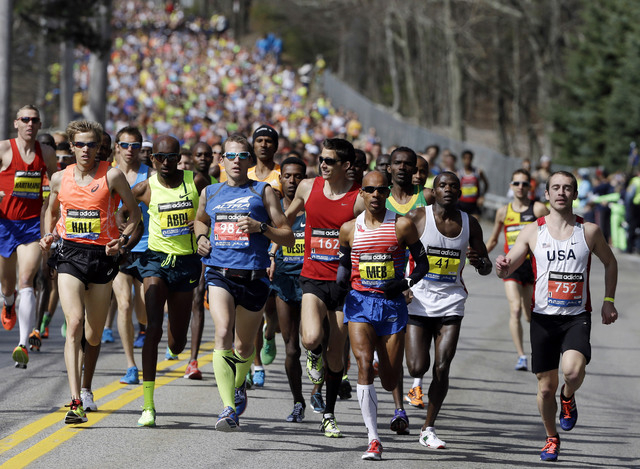 Here are things to know about this year’s running of the planet’s most venerable footrace:

The Boston Marathon was born on April 19, 1897, when a handful of men fueled by steak and whiskey conquered a course initially laid out over 24.5 miles. In 1924, the route was extended to the classic 26.2-mile marathon distance to conform to the Olympic standard. Since then, it’s become the premiere marathon in the world, this year drawing 30,000 runners from 99 countries — the third-largest field in the history of the race — and 1 million cowbell-clanging onlookers.

Since the 2013 finish line bombings, which killed three spectators and wounded more than 260 others, authorities have tightened security along the route. Law enforcement officials say the measures include stepped-up patrols by 4,000-plus uniformed and undercover police with explosives-sniffing dogs; a greater use of cameras and other surveillance; a no-fly zone over the route; and helicopter sweeps to detect any use of a radiological “dirty bomb.” Spectators are asked to leave backpacks and other large bags at home and carry only clear, easily searchable plastic bags.

Because of this summer’s Rio Olympics, some big names are skipping Boston. Others have dropped out with injuries; course record-holder Geoffrey Mutai, of Kenya, is giving the race a miss because he didn’t meet his training goals. Elite men to watch: Ethiopia’s Lelisa Desisa, who won in 2015 and 2013, and Kenyan Wesley Korir, the 2012 champion. Defending champion Caroline Rotich, of Kenya, leads the women’s field, but Tiki Gelana, the 2012 Olympics gold medalist, and fellow Ethiopian Buzunesh Deba, will be in the hunt. In the push rim wheelchair division, watch for 2015 defending champions Marcel Hug, of Switzerland, and Tatyana McFadden, of the U.S., to repeat.

SHOW ME THE MONEY

The Boston Athletic Association, which organizes the marathon, estimates it will pump $189 million into the Boston-area economy. The race is also a major fundraising tool: Thousands of runners are expected to raise more than $16 million to benefit dozens of charities.

Adrianne Haslet, a professional ballroom dancer who lost a leg in the 2013 bombings, is running to raise money and awareness for Limbs for Life, which provides expensive prostheses to low-income amputees. Supermodel Christy Turlington Burns is running to support Every Mother Counts, a group she founded to help improve maternal health worldwide.