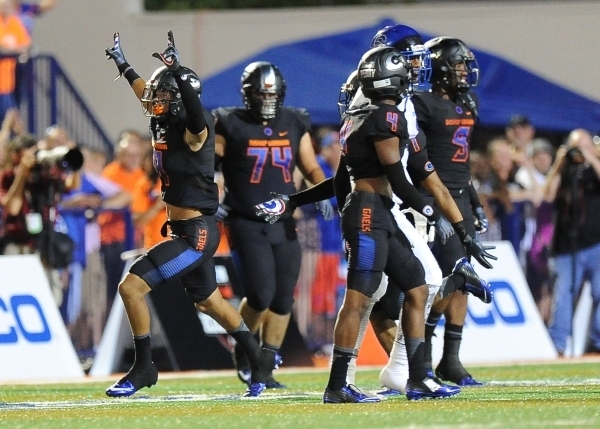 Here’s a look at some of Friday’s most interesting high school football games:

Dedeaux scored six TDs in Liberty’s 76-53 win over Mililani (Hawaii) two weeks ago, the Patriots had a bye week to prepare for Centennial.

Look for running back Rhamondre Stevenson to carry the load for Centennial as the Bulldogs try to limit Dedeaux’s touches and keep the Liberty offense off the field.

They also bring a new quarterback to town, as senior Malik Henry was cleared by the CIFs Southern Section this week.

Henry has committed to Florida State and is the top quarterback in the 2016 class according to ESPN.com. ESPN also ranks Henry as the No. 15 player overall in the class. He played at Westlake (Calif.) last season, and has been practicing with Poly since being admitted to the school last month.

The Gaels, ranked No. 1 in the nation by USA Today, counter with a trio of explosive juniors on offense in quarterback Tate Martell (Texas A&M), wide receiver Tyjon Lindsey and running back Biaggio Ali Walsh.

Seventh-ranked Palo Verde’s losses have come to No. 3 Centennial (in overtime) and No. 5 Basic (by eight points).

The Panthers have continued to lean on the run under first-year coach Joe Aznarez, but the team could use even more consistency on offense. The Panthers have averaged 262.3 yards of offense, with 210.7 coming on the ground.

A good showing in this game could vault the Skyhawks into the top 10.

The Crusaders have won the last two Sunset titles, and have won two straight games since dropping their season opener against Yuma Catholic (Ariz.).

Junior running back Christian Marshall has been the go-to weapon for Faith Lutheran, with 351 rushing yards and four TDs, and six receptions for 178 yards and two scores.

The Desert Shields counter with a stout defense that has yielded a total of 19 points this season.

That streak moved to 30 after the first week of the season, but Rancho has silenced the snickers with consecutive wins.

Now the Rams will look to make it three in a row, and appear to have the punch to do it. Robert Howard (376 rushing yards, five TDs) has been the top offensive option, and Rancho has done a great job shoring up its defense this season. The Rams have allowed a total of 26 points in three games. Opponents averaged 49.7 points against Rancho last season.

Go to nevadapreps.com for a full schedule and complete scoreboard.