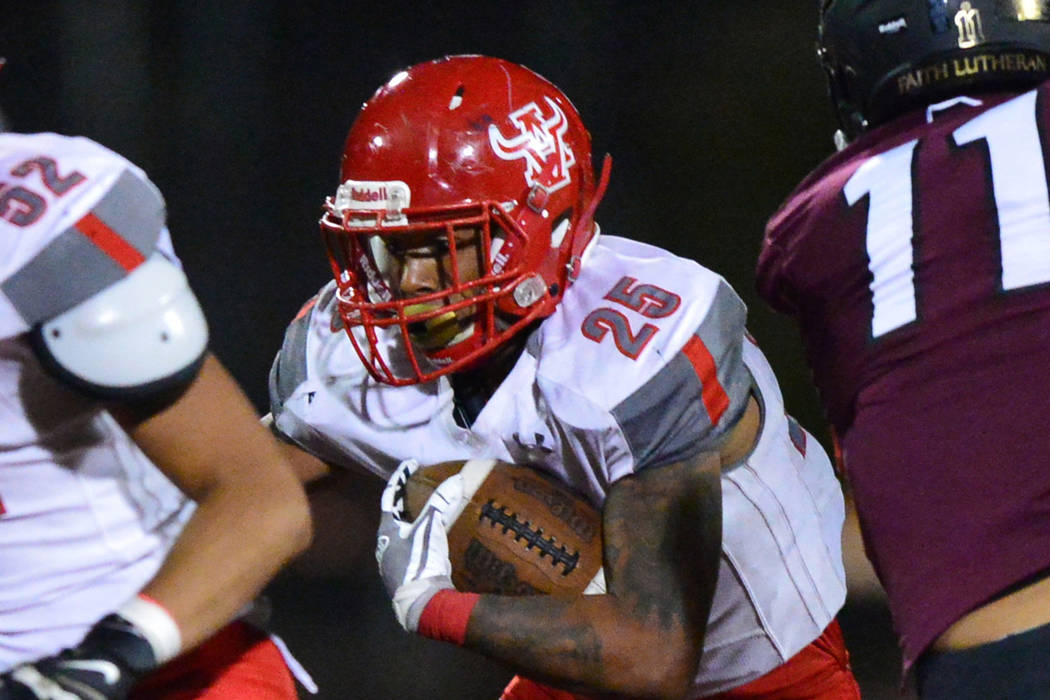 Together, they proved a mountain too tall to climb.

Behind 295 yards from running back Peyton Dixon, Bishop Manogue took advantage of those three Arbor View turnovers to beat the Aggies 42-34 in a Class 4A state semifinal on Saturday at McQueen. Manogue will advance to face Bishop Gorman for the state championship next Saturday at Sam Boyd Stadium.

Until turning the ball over, the Aggies (12-2) had dominated most of the first half. They were leading 20-7 deep into the second quarter, and seemed poised for more, when wingback Kyle Graham took a screen pass and followed a convoy of blockers for a 27-yard gain to the Manogue 35-yard line.

But the Aggies fumbled the snap on the next two plays. Quarterback Logan Bollinger picked up the first one and fought his way back to the line of scrimmage. But the second time, Manogue’s Kruz Conway came up with the ball for the Miners.

The second came on Arbor View’s next possession. Graham started the drive with a 19-yard run, but after a false start penalty, Jackson intercepted a deep pass from Bollinger inside the Manogue 10 and returned it to the Arbor View 44.

“Really, we did great the first half. We went up and down the field,” Arbor View coach Dan Barnson said. “We ran a play and our center gets illegally cut 40 yards down the field and blows his ankle out, and we fumble it the next two snaps, so what can you do?”

Dixon started the second half with a 76-yard touchdown run to make it 28-20 and he later added a 37-yard TD reception from Scolari that made it 42-27.

The Aggies answered that score quickly, striking back on a 27-yard touchdown pass from Bollinger to York St. Hilaire to get within 42-34.

The Arbor View defense came up with a stop, giving the Aggies the ball at the Manogue 45 with 1:59 left in the game. But Jackson again intercepted Bollinger with 1:31 left.

“I’ve coached a long time, and usually the team that loses the turnover battle, loses the game,” Barnson said. “We turned it over a few times and they capitalized.”

The Aggies controlled most of the first 18 minutes. They needed just five plays to get on the board, taking a 7-0 lead on a 10-yard touchdown run by Graham, who set it up with a 44-yard reception from Bollinger on the first play of the game, and a 28-yard run on the third.

“We kind of had the feeling they’d load the box, so see if we can run somebody right by them, and we did,” Barnson said.

A 5-yard punt set up the Aggies’ second possession at the Manogue 41, and Graham made it 14-0 with an 18-yard touchdown run.

Manogue answered on a 1-yard touchdown run by Ezekial Lee, after a 79-yard run by Dixon to the Arbor View 1.

The Aggies made it 20-7 on a 1-yard quarterback sneak by Bollinger capped a 49-yard drive, after an unsuccessful fake punt by Manogue.

Graham finished with 210 yards on 28 carries and added four catches for 85 yards.