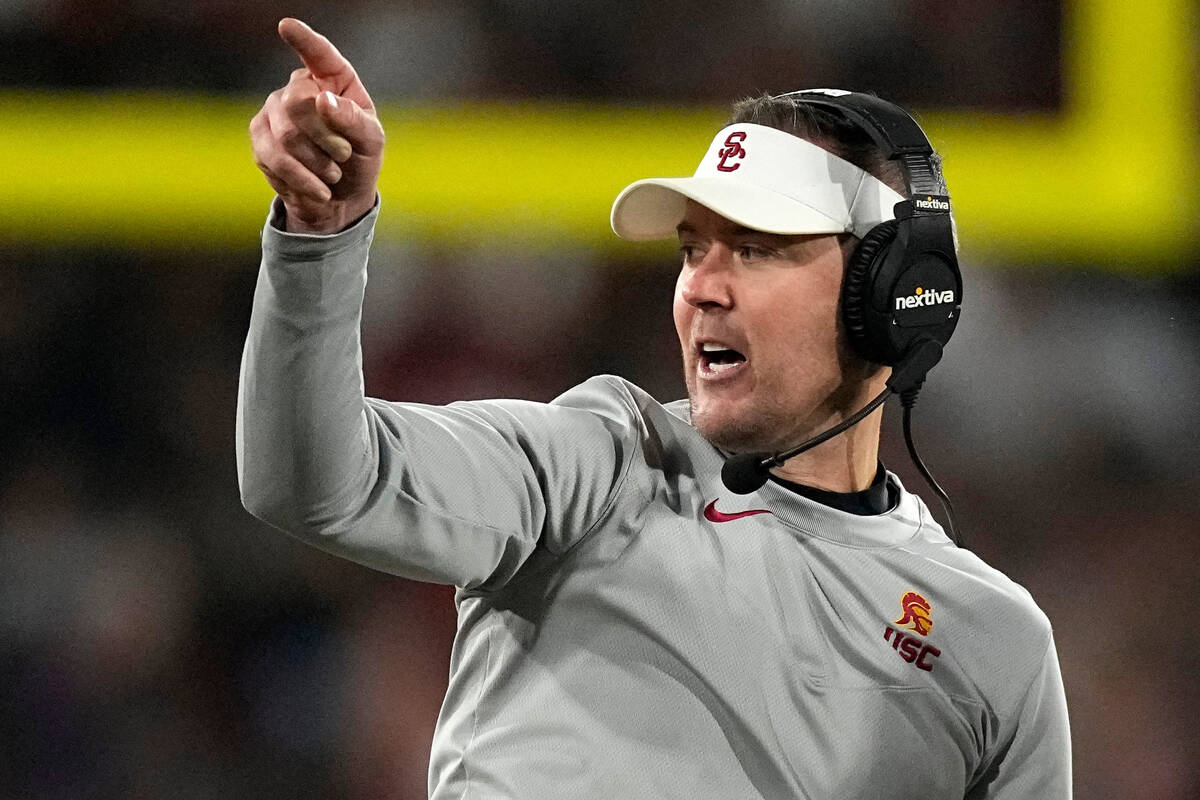 USC coach Lincoln Riley understands what’s at stake. Win and the No. 4 Trojans will likely clinch a berth in the College Football Playoff, ending the Pac-12’s CFP drought and guiding USC to its first appearance since the event’s inception in 2014.

Lose to Utah, No. 12 in the AP poll Friday, and USC can kiss its hopes of winning a 12th national championship goodbye.

However, Riley — coaching his first season at USC after five hugely successful seasons in the Big 12 with Oklahoma — says the pressure to win has always been there. Now it’s just evident to the outsiders.

“The reality is all the games have had this much at stake on them,” he told reporters this week. “Because if you don’t win those, you’re not even playing in this one.”

Friday at 5 p.m., USC faces Utah in the Pac-12 championship game at Allegiant Stadium. Pac-12 Commissioner George Kliavkoff announced the event had sold out during his state of the conference address Thursday.

The expected crowd of 61,000 will set a record for neutral-site attendance at a Pac-12 title game, beating the 56,511 who saw Utah defeat Oregon during the 2021 season. This is also the first time the Pac-12 championship game has sold out since moving to neutral sites in 2014.

Las Vegas and Allegiant Stadium have hosted the game since 2021. Kliavkoff also announced Thursday the conference had reached an agreement with the Raiders, Las Vegas Convention and Visitors Authority and MGM Resorts International to keep the game at Allegiant Stadium through the 2023 season.

The Trojans (11-1, 8-1 Pac-12) have enjoyed a fairly straightforward path to the conference title game. USC rolled to a 6-0 start, led by Riley and its Heisman-candidate quarterback Caleb Williams, who also arrived from Oklahoma.

But the Trojans stumbled during their trip to Salt Lake City, losing a 43-42 shootout to the Utes.

Riley downplayed the revenge factor ahead of the game. He said he’s simply excited to play another great game this week.

“They got us that time, but this is not about that game,” Riley said. “This is a new game, a new challenge, a new setting. Both teams have evolved.”

Utah’s road to the championship game was a little more convoluted. Led by a defense that allowed just 20.1 points per game, the reigning Pac-12 champions still lost games to conference opponents UCLA and No. 15 Oregon, along with a road loss at Florida to start the season.

The Utes (9-3, 7-2) finished in a three-way tie for second place. The Pac-12 eliminated its division format ahead of the 2022 campaign, and Utah’s 7-2 conference record put it on even ground with Oregon and No. 9 Washington.

The Utes advanced due to the tiebreaker, as Utah had the best win percentage among common opponents. Now, the Utes have a chance to play spoiler and earn a second consecutive Rose Bowl berth.

“A lot of things had to line up for us,” Utah coach Kyle Whittingham told reporters this week. “They all transpired. Our team did a really good job of taking care of our business.”