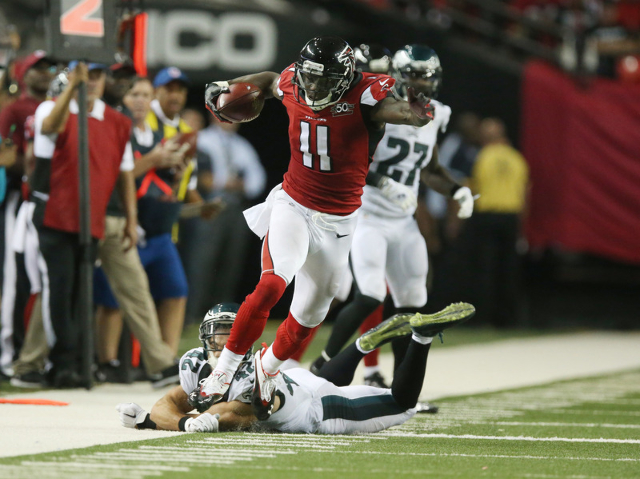 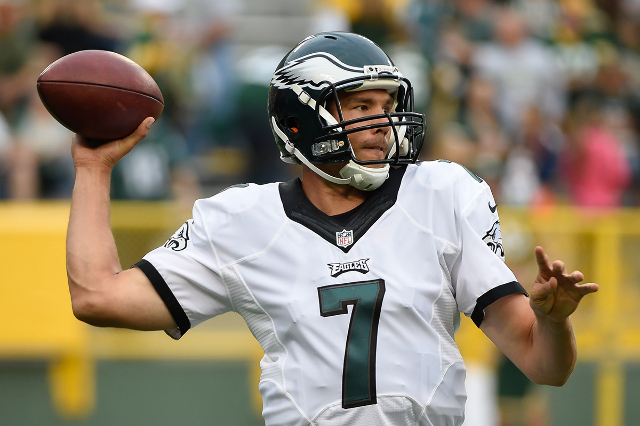 After the Philadelphia Eagles erased a big halftime deficit to take the lead, the Atlanta Falcons had a chance to fold midway through the fourth quarter.

Instead, the Falcons threw the ball to star receiver Julio Jones and relied on the leg of trusty veteran kicker Matt Bryant.

Jones caught two touchdown passes, and Bryant kicked four field goals to help the Falcons survive a furious Philadelphia rally in the second half and give new Atlanta coach Dan Quinn his first win, 26-24 on Monday at the Georgia Dome.

“What an awesome finish,” Quinn said. “We thought it would come down to the finish, just like it did.”

Jones made nine receptions for 141 yards, including a 44-yard catch that set up Bryant’s go-ahead, 47-yard field goal with 6:47 to play.

The Eagles had two more chances, but kicker Cody Parkey missed from 44 yards out, and quarterback Sam Bradford threw his second interception of the night on Philadelphia’s final drive. Atlanta safety Ricardo Allen corralled a tipped ball for the game-sealing interception.

Trailing 20-3, the Eagles grabbed the momentum early in the third quarter on safety Walter Thurmond’s interception of Ryan. Two plays later, running back DeMarco Murray scored his first touchdown as an Eagle on an 8-yard sweep.

Bradford shook off an uneven first half and led scoring drives of 95 and 80 yards in the second half. The Eagles took the lead, 24-23, on a 1-yard touchdown run by running back Ryan Mathews.

Bradford, in his Eagles debut, finished 36 of 52 for 336 yards with a touchdown and two interceptions. Murray, last year’s NFL leading rusher, gained just 9 yards on eight carries, but he scored one touchdown on the ground and one on a 5-yard reception.

The Falcons dominated the first half, stymieing the Eagles’ defense and moving the ball on the ground and through the air. Philadelphia managed only 8 yards on the ground before the break, and Bradford and his receivers rarely looked on the same page.

“We’re going to learn,” Philadelphia coach Chip Kelly said. “I thought our approach and what we did in the second half, we can build upon that, and then the first half we correct that.”

While the Eagles struggled in the first half, Ryan and the Falcons’ offense were rolling. Jones took a quick screen pass from Ryan and twisted his way into the end zone from 4 yards out to put the Falcons up 10 with 10:44 to go in the second quarter.

“Julio is an awesome player,” Ryan said. “He shows that basically every time he steps on the field.”

Atlanta safety William Moore picked off Bradford late in the second quarter, setting up Jones’ second touchdown grab and sending Atlanta to the locker room up 20-3.

It could have been worse, but Philadelphia linebacker Kiko Alonso made a leaping, one-handed interception in the end zone to thwart an Atlanta threat in the first quarter.

The offseason saw Kelly retool his roster ahead of his third season in Philadelphia. Quarterback Nick Foles was sent to the St. Louis Rams in exchange for Bradford. Running back LeSean McCoy was traded to the Buffalo Bills for Alonso, and Murray was signed away from the Dallas Cowboys.

The Falcons hired Quinn, the defensive coordinator for the Seattle Seahawks in 2013 and 2014, to replace coach Mike Smith. Quinn appears to have already made his mark on a Falcons defense that was among the worst in the league last season.

“That’s definitely coach Quinn,” Falcons corner Desmond Trufant said about the defense’s intensity. “Everything he does is about energy. We’re always working hard, playing fast, and it showed tonight.”

Both teams are trying to bounce back from missing the playoffs last season. The Eagles seemed to be in control of the NFC East for much of last season, but they folded down the stretch, finished 10-6 and missed the playoffs.

The Falcons, thanks to a weak NFC South, were in the playoff hunt until getting blown out by the Carolina Panthers in Week 17. They finished 6-10 and missed the playoffs for the second consecutive year after hosting the NFC Championship Game following the 2012 season.

NOTES: The Falcons were without WR/KR Devin Hester, who was battling a toe injury that kept him out of practice leading up to Monday’s game. … Philadelphia TE Zach Ertz, who missed the entire preseason with a groin injury, was active Monday. … Atlanta ended a three-game losing streak on “Monday Night Football.” … WR Jordan Matthews led the Eagles with 10 catches for 102 yards. … The attendance was 70,516.