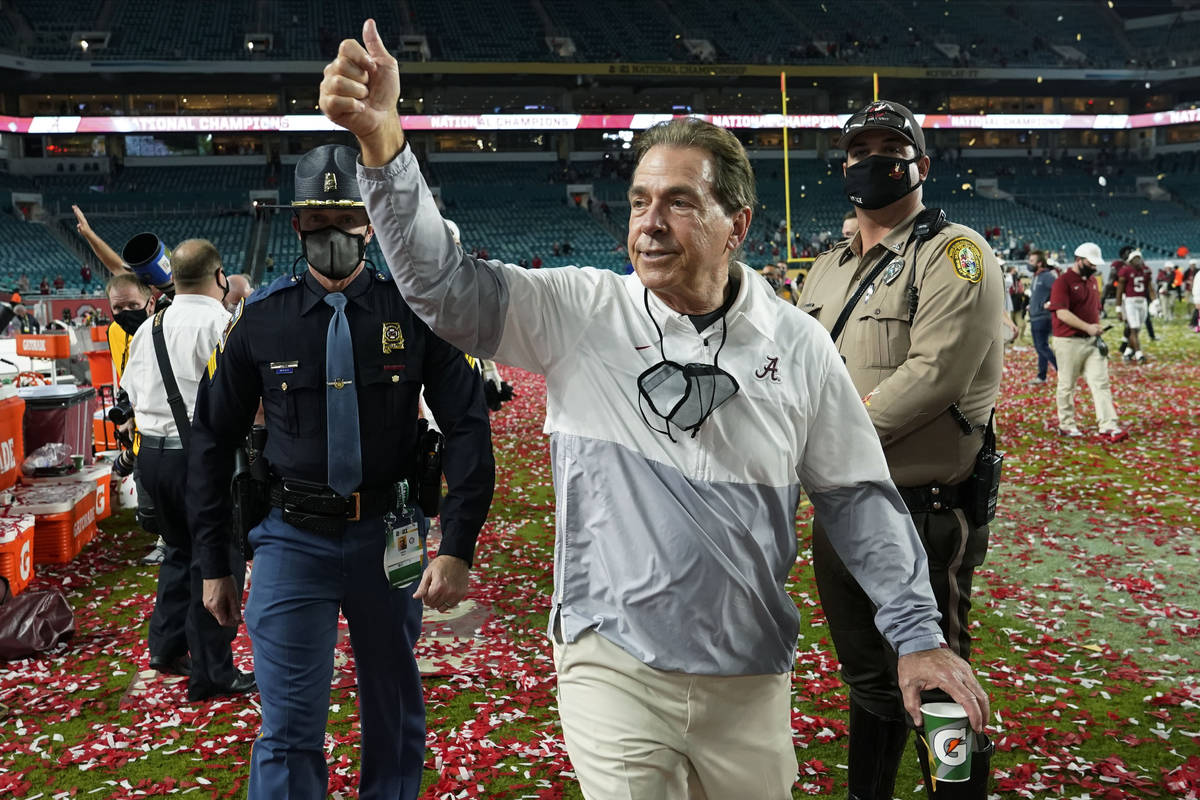 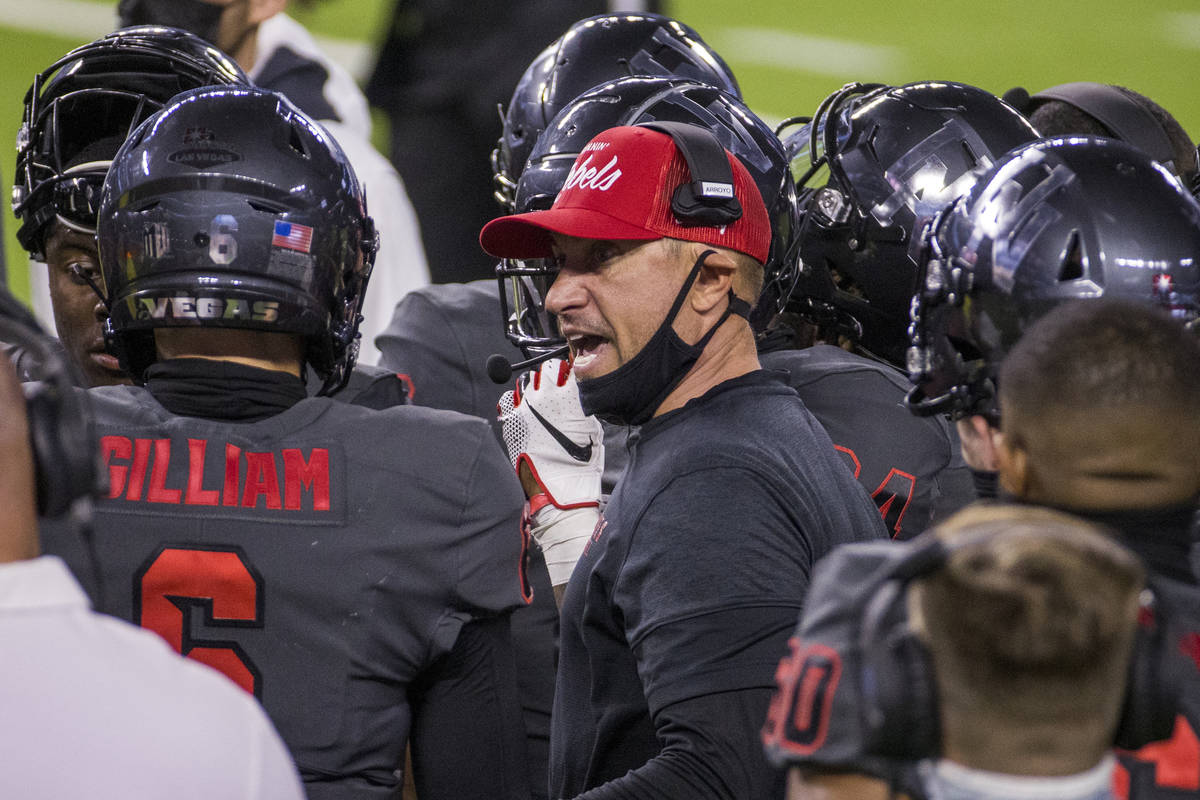 UNLV Rebels head coach Marcus Arroyo, center, speaks to quarterback Max Gilliam (6) and other offensive players on a must make fourth down drive during the second half of their NCAA football game versus the Nevada Wolf Pack at Allegiant Stadium on Saturday, Oct. 31, 2020, in Las Vegas. L.E. Baskow/Las Vegas Review-Journal) @Left_Eye_Images

When COVID-19 nearly wrecked the 2020 college football season, UNLV’s scheduled trip to Iowa State was moved back a decade.

Having already been moved once, the game could be completely wiped out by 2030, not because of a global pandemic but by a desire by the Power Five conferences for even more control, power and money.

Those football conferences, plus Notre Dame, could be in a completely separate division well before then, forcing UNLV and other programs outside the Power Five to compete on their own and without the ability to play big-money games on big-time stages.

With the ability of college athletes to make money from their name, image and likeness already the law in several states and with a Supreme Court case that asks whether the NCAA’s restrictions on compensation for student-athletes are in violation of federal antitrust law, the gap between the haves and have-nots in the college football world is about to widen.

Given their larger fan bases and wider media exposure, football players at Power Five conferences would be much better positioned to cash in on the new NIL regulations, giving those programs an even greater advantage in recruiting than they already enjoy.

UNLV athletic director Desiree Reed-Francois said through a spokesman that she wanted to withhold comment for now on a potential Power Five football breakaway, but that the school was working on an NIL plan.

On Thursday, the College Football Playoff management committee proposed expanding the playoff field from four to 12 teams, with six spots reserved for the highest-ranked conference champions and the other six going to at-large selections.

Such a field could include the Mountain West champion, giving UNLV a potential path into the playoffs. MW Commissioner Craig Thompson is on that committee.

But should the ACC, SEC, Big Ten, Pac-12 and Big-12 break away, they could create their own postseason format that doesn’t include those other programs.

The Power Five conferences have been consolidating control for many years in preparation for such a move.

“College football has clearly broken away anyway,” University of Southern California sports business expert David Carter said. “The autonomy five or whatever they want to be called these days, they are running it more so than the NCAA.”

To that end, the Knight Commission, the organization that carries great influence with college athletic administrators, has proposed a formal removing of all the top-tier, NCAA Division I football programs, the FBS to which UNLV belongs, from under the NCAA umbrella.

The commission issued a report in December called “Transforming the NCAA D-I model” that creates a separate governance structure for FBS programs that would be called the National College Football Association.

“FBS football generates the largest amount of revenue as it relates to all of college sports, and yet there’s not single entity in control of and responsible for the sport,” Knight Commission CEO Amy Privette Perko said. “So the governance of the sport is fragmented between the College Football Playoff, the conferences and then the role that the NCAA does play.”

That role, Perko pointed out, includes assuming the legal responsibility for the sport and overseeing the regular season, all done without receiving any revenue.

Economics, several experts said, would be the driving force behind any kind of FBS or Power Five football breakaway, whether it’s formal or informal.

ESPN college basketball analyst Jay Bilas, a former Duke basketball player and outspoken critic of the NCAA, said the power conferences already are moving to a point where they play only each other in football and men’s basketball.

“The days of being able to schedule a game and everybody’s just going to go, those days are over,” Bilas said. “Expectations are higher now, and there’s more competition for spectators’ time and attention. The students don’t go as often as they used to. They want to go to the bigger games, so they’re not as interested in seeing these other games.”

Athletes’ ability to profit off their name, image and likeness is the next likely flash point that will determine the future state of the NCAA.

It’s an issue the NCAA has fought for many years, maintaining such payments are counter to the contention that its athletes are amateurs. But on this issue, momentum is against the organization.

Many states have passed or are considering passing legislation to allow athletes to benefit from NIL. Those state decisions caused the NCAA to put together a working group last year to craft a proposal that is expected to be voted on June 22 or 23 by the Division I Council.

Regardless of what the NCAA does, laws take effect July 1 in Alabama, Florida, Georgia, Mississippi and New Mexico that allow athletes to accept endorsement deals. The same is true in Arizona beginning July 23.

Laws in 12 more states will be enacted next year and beyond, including Nevada in 2022. Assembly Bill 254 takes effect Jan. 1, and it was passed overwhelmingly 34-8 in the Assembly and unanimously in the Senate. Gov. Steve Sisolak signed the bill on May 29.

Bilas said that while the NCAA has repeatedly fought the athletes’ ability to make money off their NIL, they have been silent when it comes to coaches and athletic departments enriching themselves.

Money, he said, was the reason those departments continued to play games even during the height of the COVID-19 pandemic.

“We played because the institutions owed content to media-rights companies, and in order to get paid for that content, they had to play and provide the content,” Bilas said. “That’s demonstrable by a single question. Name me one nonathlete that the university put on an airplane for a university function last year. There’s not one. So other students wanted to participate in their chosen field of endeavor, but they weren’t allowed to.”

Supreme Court to weigh in

Right around the time the NCAA makes a decision on NIL, the U.S. Supreme Court will announce its determination on NCAA v. Alston. At stake is whether the NCAA remains exempt from antitrust laws to maintain current amateurism rules.

A federal district judge last year ruled the NCAA could not limit athletes’ educational benefits, such as receiving equipment such as laptops or monetary grants for academic accomplishments. The NCAA argued that allowing athletes to receive such benefits would create a loophole that could be exploited to provide recruiting enticements that would more closely resemble pay for play.

The NCAA’s stance didn’t seem to fly with the Supreme Court justices during oral arguments on March 31. The newest member, Amy Coney Barrett, asked why the NCAA gets to decide how athletes earn money. Justice Samuel Alito noted athletes already receive compensation in the form of scholarships and stipends.

“The bottom line is that leaders understand the status quo is going to change,” Perko said. “There will be major changes in college sport, so I think most leaders want to better understand how this new structure might address some of the questions around antitrust challenges for the future and how this model will make it better for universities, better for athletes.”

No one knows for sure how the Power Five football programs would create their own division, other than it likely will occur sooner rather than later given the NIL and Supreme Court decisions that are coming.

Also worth watching is what happens with the TV contracts. Over a three-year period beginning in 2023, contracts will up for renewal for four of the Power Five conferences and the College Football Playoff. The Atlantic Coast Conference signed a 20-year contract with ESPN in 2016.

The Power Fives could spend the time before those deals expire positioning themselves for even grander paydays.

If the Knight Commission gets its way, there will be central leadership for all 10 FBS conferences. Perko pointed out the last major change to college athletics’ structure occurred in 1973 when the three divisions were formed.

“The commission believes it’s time for another evolution structure,” she said. The evolution could play out even more dramatically.

The Power Fives could form a clean break, and the Knight Commission’s governance model would apply to those schools. Maybe the Power Fives take the best of the best and create their own Super League.

“Just because you’re in the Big Ten doesn’t mean you automatically get a spot,” Carter said of such a scenario. “How is Purdue going to feel? How will Mississippi State or Oregon State feel if they don’t make it? Are they going to litigate?

“Think about it from a booster standpoint, a different piece of that. If my school didn’t get it, yeah I’m angry, but if I’m on the outside looking in, what’s the point in donating to Oregon State at this point if they’re going to be playing in some other conference alignment or some other structure?”

It’s a question that could be asked at programs, including UNLV, throughout the nation. 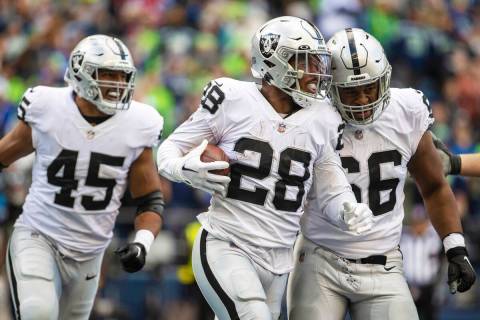