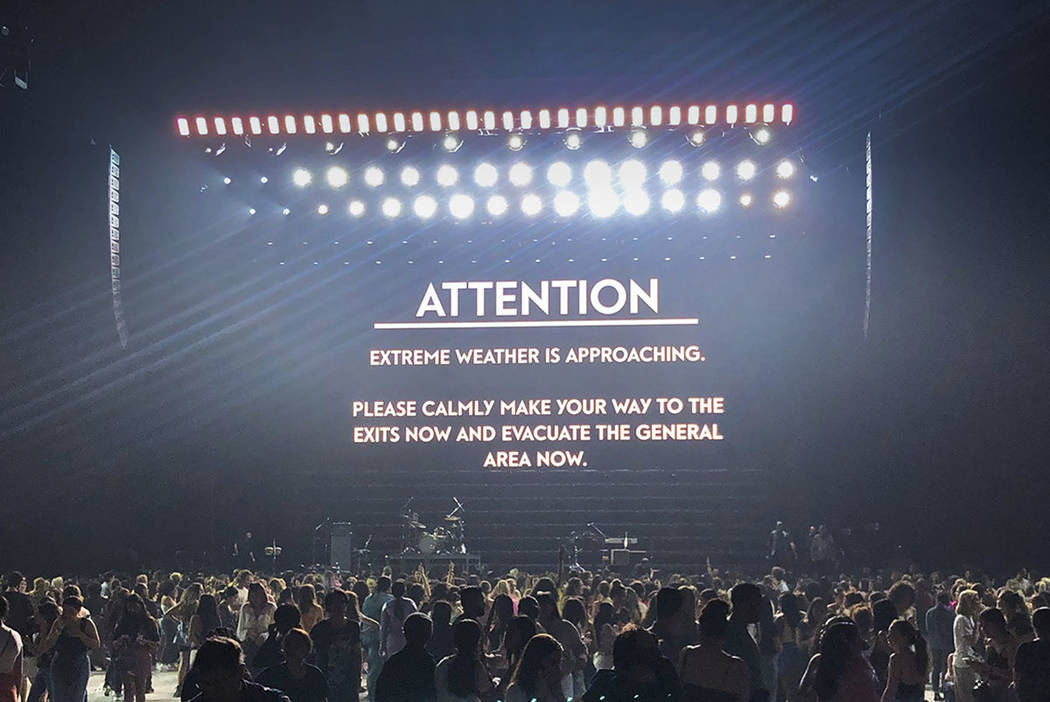 A message appears on stage warning concertgoers of extreme weather at the Pepsi Zero Sugar Super Bowl Party at Meridian on Island Gardens in Miami on Friday, Jan. 31, 2020, in Miami , Fla. (Photo by Scott Roth/Invision/AP)

MIAMI — Torrential rains in Miami overshadowed rapper Post Malone’s pre-Super Bowl show, ultimately shutting down the red carpet and delaying his set until the early morning hours of Saturday. Nearby, the weather forced Harry Styles to cancel his show.

Friday night’s Bootsy Bellows show promised to be a star-studded event as the Los Angeles-area club’s pop-up took over a picturesque island in Miami, with VIP guests slated to arrive by yacht. But relentless rains caused multiple delays and confusion.

Several DJs, including Denver Broncos player Von Miller, entertained the crowd for hours until actor-comedian Kevin Hart, who was supposed to host, awkwardly came onstage after 2 a.m. Hart was supposed to arrive by water, but all boats slated to arrive at the event were cancelled after the National Weather Service posted a severe storm watch until 3 a.m.

“Make some noise for my guy Mr. … what, well that’s gonna be a tough pickle,” Hart said to someone offstage, before shouting, “I love you,” to the audience and walking off.

The DJ took over again and attempted to pump up the crowd until the show’s headline finally took the stage about 15 minutes later at 2:30 a.m. Post Malone opened with his hit “Wow.” before abruptly stopping to apologize profusely for the weather.

“I just want to say thank you to everyone who walked through a (expletive) foot of water just to come hang out tonight,” he said.

Nearby, Harry Styles’ show was evacuated because of severe conditions. Styles said he was disappointed, tweeting that “the fire department would not let us do the show under any circumstances. Please stay safe.”

During Post Malone’s 30-minute set, he performed hits including “Better Now” and later brought Ty Dolla $ign onstage to sing “Psycho” — a song he said he wrote about a shiny watch.

At various points during the set, the Grammy-nominated artist stopped singing, instead letting his vocals on the background tracks play as he walked around the stage.

“I’m drunk right now so I don’t have much to say,” said the rapper, who stars in a new Super Bowl ad for Bud Light .

He dismissed his monster hit “Sunflower,” telling the audience, “Thank you for listening to these (expletive) songs, as well. It means a lot to me.”

Earlier in the night, the ferocity of the weather plunged the red carpet into total chaos, as non-celebrities took the opportunity to try to get in front of the camera, while several wet, shivering and irritated celebrities — including Lala Anthony and football player Odell Beckham Jr. — huddled nearby, refusing to stop for pictures or talk to the press.

Other attendees included The Chainsmokers, who are headlining a show Saturday night, chef Guy Fieri, rapper G-Eazy, and the Cleveland Browns’ Baker Mayfield.

Later, Post headed to hot 24-7 club E11even where he requested $50,000 in one dollar bills and partied until 7 a.m., according to a spokesperson for the club. Vin diesel, Demi Lovato and Snoop Dogg were also spotted there.