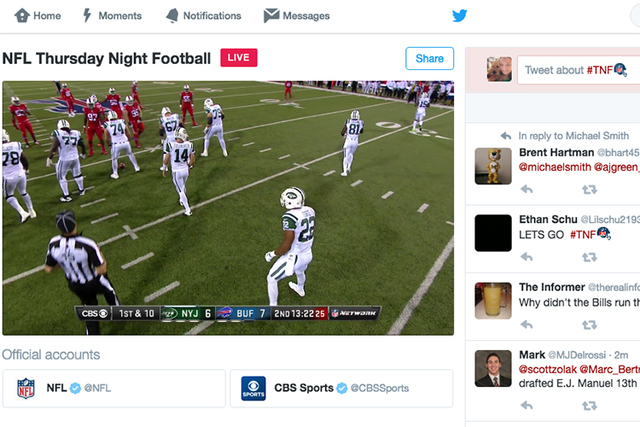 Fans were able to watch from their desktop computers via Twitter Thursday night's NFL game between the Buffalo Bills and New York Jets. The biggest complaint of Twitter's live stream of the game was about buffering and delays, but for the most part was met with rave reviews. 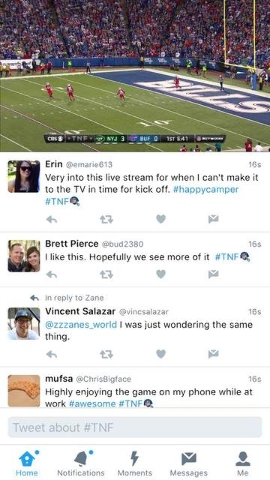 Twitter's experimentation with streaming NFL games was met with mostly rave reviews during Thursday night's game between the Buffalo Bills and the New York Jets. 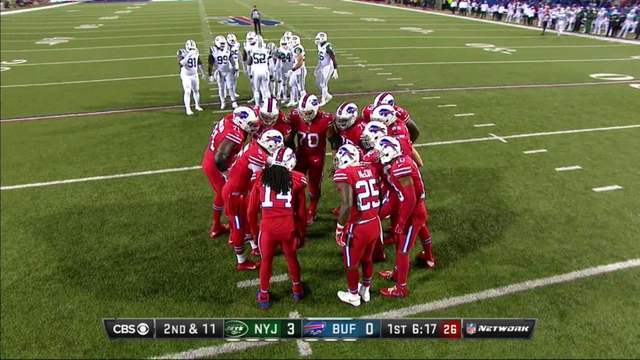 Thursday's game between the Buffalo Bills and New York Jets was the first of 10 "Thursday Night Football" games that Twitter will be streaming this season.

NEW YORK — Twitter made a smooth debut with its broadcast of a National Football League game on Thursday, attracting generally positive tweets throughout the matchup between the Buffalo Bills and the New York Jets.

The CBS live feed marked the first time an NFL game had been broadcast on Twitter and the event quickly began to trend on the social media platform.

Twitter users on computers and mobile devices were able to see tweet commentary running alongside a video feed that featured the same footage and commentary available on the television broadcast.

Pittsburgh Steelers running back DeAngelo Williams (@DeAngeloRB) tweeted: “Took 5-seconds watching #TNF on to know this is the wave of the future.”

Some viewers, however, complained of persistent “buffering” and said that the Twitter video lagged behind the television broadcast. The video on the social media platform at some points was operating on a delay of almost 30 seconds.

“The quality is better than my HD TV, but it being delayed stinks,” wrote Twitter user DCBlueStar . “I’ll stick to the TV, I reckon.”

Available on Twitter’s platform worldwide, Thursday’s game was the first of 10 that the microblogging site plans to stream as it seeks to make itself a force in mobile video with live events.

Twitter has struggled with user growth and advertising competition, and livestreaming the games gives the social network a new avenue to attract users as it tries to catch up with rivals like Facebook Inc.

Twitter’s arrangement with the NFL comes as sports fans increasingly rely on the internet to watch video at the expense of traditional cable and satellite connections. Many already use Twitter to discuss events as they happen.

The broadcast was also available through Twitter apps on Apple TV globally, Microsoft Corp Xbox One and Amazon Fire TV in select countries.

The NFL previously livestreamed an October 2015 game on Yahoo.