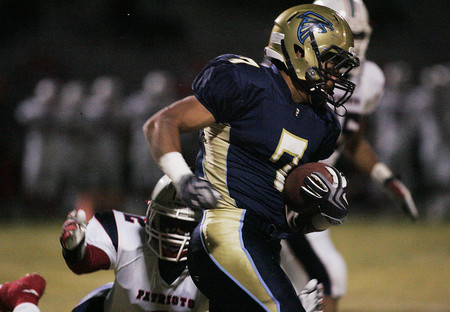 But a win tonight will get the Foothill Falcons something that will earn them respect: a spot in the football playoffs.

The Falcons haven’t gotten as much attention this season as preseason favorite Silverado. Last year’s playoff holdovers Basic and Del Sol have gotten more publicity, as has upstart Liberty.

But that doesn’t bother the Falcons.

"That’s fine if everyone else is getting all the publicity right away," Foothill coach Marty Redmond said. "We knew we were going to be a pretty good, and we’re right in the thick of things here."

"Everyone underestimated us, so we had to come out and show what we can do," senior wide receiver Tyrel Garner said.

The Falcons can lock up a playoff spot by beating Silverado this week or Basic in their regular-season finale.

"We control our own destiny," Redmond said. "We have to win one of two, but we want to win this week, definitely."

Silverado, meanwhile, is fighting for its playoff life. The Skyhawks must beat Foothill and Green Valley, then hope for help.

While Silverado has struggled in league play, there was a reason the Skyhawks were the preseason favorites in the Southeast.

"They’ve got a little bit of everything that makes a good team," Redmond said. "Their last two losses have been pretty close games. They’re a very competitive football team. It’s going to be a difficult game."

After averaging 41.8 points in their first five games, the Skyhawks have struggled offensively in losing three straight league games, scoring a total of 25 points.

Silverado features one of the area’s top running backs in Teran Madu-Jules (1,239 yards, 15 touchdowns) but hasn’t given him much help. The Skyhawks average just 48.6 passing yards.

Foothill’s offense is just the opposite. The Falcons are one of the area’s stronger passing teams, and quarterback Parker Riggin has been peaking. He has passed for 1,295 yards and 11 touchdowns, including 533 yards and six TDs the last two weeks.

"It’s getting better and better," Garner said of the passing game. "We go from 50 yards a game and now we’re throwing 250."

Foothill running back Connor Afoa (560 rushing yards, three TDs) has topped 100 yards in back-to-back weeks. But the key for the Falcons might come on defense, as they try to continue to stifle Silverado.

"We’ve got to be able to stuff the hole, get a hat on the ball and force turnovers," senior linebacker Dillon Armstrong said. "Everyone has to rally to the ball."