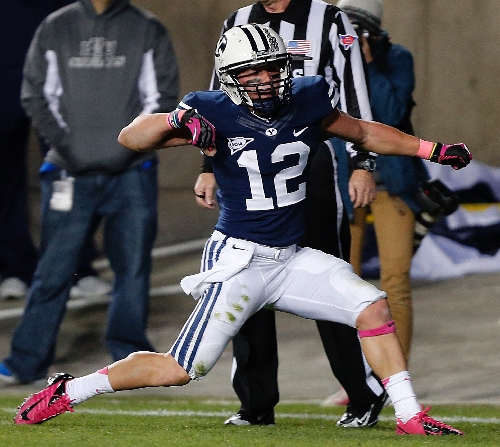 PROVO, Utah – Freshman quarterback Taysom Hill passed for 235 yards and a touchdown, and Brigham Young’s defense did the rest in a 6-3 victory over instate rival Utah State on Friday night.

The Aggies (4-2) had a chance to tie the game with 7:47 left, but Josh Thompson pulled a 38-yard field-goal attempt wide left.

BYU’s fifth-ranked defense has not allowed a touchdown in 13 straight quarters and held the Aggies’ high-powered duo of Chuckie Keeton and Kerwynn Williams in check for most of the game. Keeton completed 22 of 38 passes for 202 yards but was intercepted once and fumbled once.

The Aggies have lost 17 straight games against BYU in Provo.

The Cougars’ only points were on Hill’s 3-yard pass to JD Falslev with three seconds left in the first half. Thompson’s 26-yard field goal late in the first quarter accounted for Utah State’s only points.

Hill’s only mistake was a fourth-quarter interception. He also gained 80 yards on 19 carries.