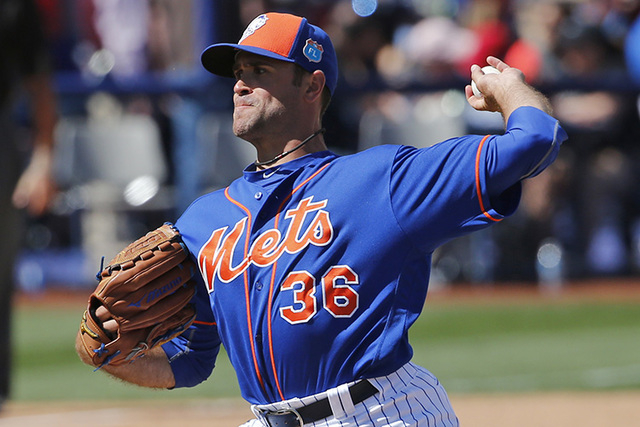 The 51s Sean Gilmartin pitches against the Chicago Cubs during an April exhibition game. Gilmartin spent last season as a reliever with the Mets. (John Locher/AP)

Shortly after Sean Gilmartin’s first start of the year, the lefty was reflecting on the one pitch he would have liked back — a pitch that went for a line drive double and a run.

“Next time out, it’ll probably be a different pitch, but that’s part of the reason why you’re here learning,” Gilmartin said.

Sunday was the next time out for Gilmartin, and it wasn’t a different pitch. If not for Fresno third baseman Colin Moran, Gilmartin would have been close to perfect during his seven-inning outing on Sunday.

Gilmartin gave up three hits — two to Moran — in the 51s’ 3-0 victory at Chukchansi Park.

He walked none and struck out eight in the outing, lowering his ERA to 0.84 in the process and helping the 51s improve to 5-4 on the season.

“This guy really knows how to pitch,” manager Wally Backman said. “His numbers last year, what he did in the big leagues, I think, speak for themselves and he’s just in an unfortunate situation right now because the kid can really pitch.”

He was competing for one of the last spots in the bullpen throughout spring training so he spent his first two starts of the season getting stretched out.

But though he was held to a pitch count in the 80s Sunday, he was efficient throughout, retiring 21 of 24 batters.

“Gilmartin was outstanding,” Backman said. ‘He faced a predominant left-handed hitting lineup, but he overmatched the hitters.”

It was the fourth straight solid start from the 51s rotation and the second consecutive quality start.

On Thursday, before their 6-2 victory over Sacramento, Backman had a talk with the team on a wide-ranging set of issues.

The 51s had given up 27 walks in their first five games and at that point, the team’s relievers had pitched more innings than its starters.

Since then, the starters haven’t given up a walk in three of four games and been giving the 51s innings.

“They’ve gotten their feet wet,” Backman said of the starters. “They’ve got two starts under their belt. I think that we know what we can expect from them.”

And now that it’s a couple weeks into the season, he thinks they’re “going to see the pitching that these guys are capable of doing,” adding that now he’d just like to see his hitters hit better with runners in scoring position.

The one hit, a Travis Taijeron single in the sixth inning, drove in Matt Reynolds, who tripled earlier in the inning.

Reynolds’ second triple of the game drove in second baseman Dilson Herrera two innings later and then Taijeron drove in Reynolds, once again, with a sacrifice fly.

The win was the team’s second in as many days against Fresno and after losing to the Grizzlies in the first game of the series, the 51s will attempt to take the series from the reigning Triple-A champions on Monday afternoon.