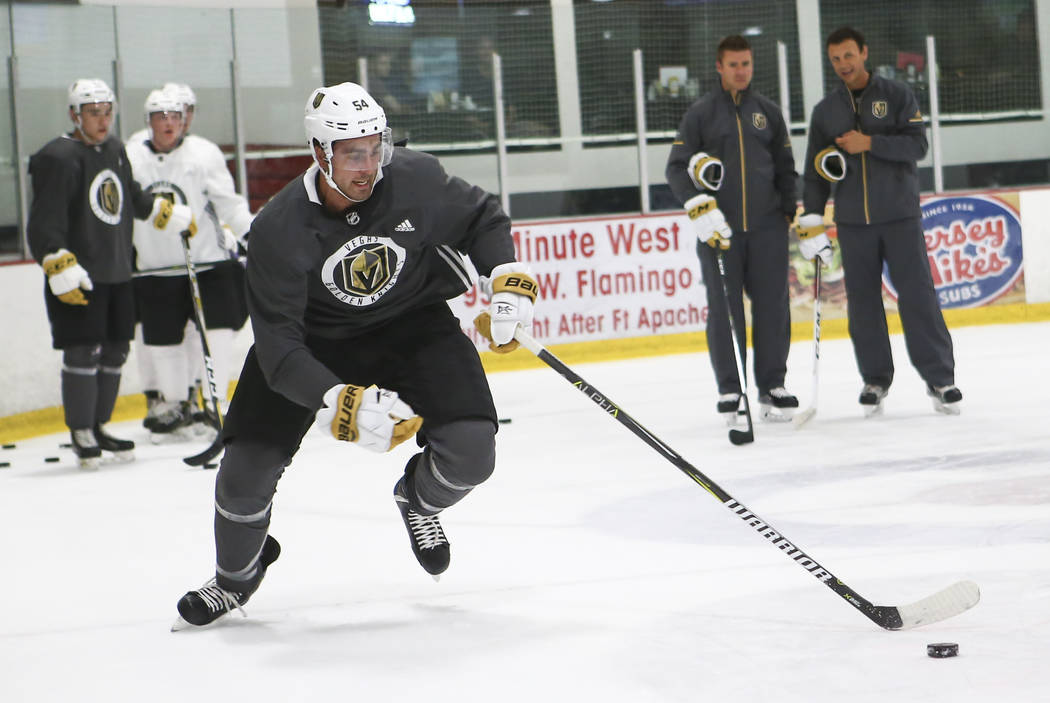 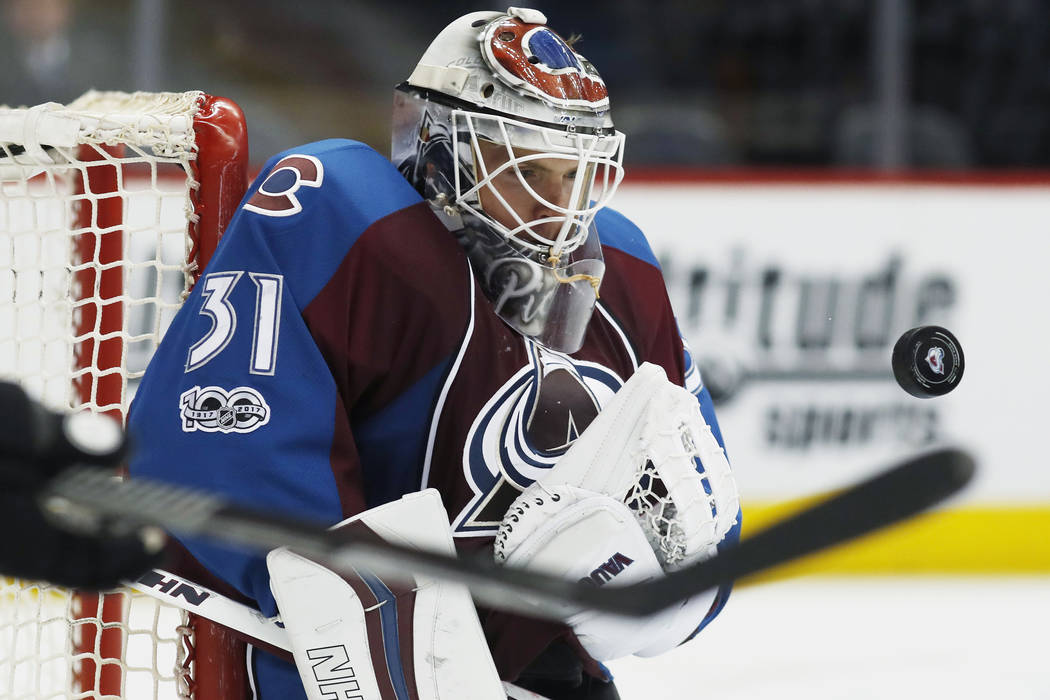 Colorado Avalanche goalie Calvin Pickard watches the puck bounce off his chest after stopping a shot against the Chicago Blackhawks in the second period of an NHL hockey game Tuesday, April 4, 2017, in Denver. (AP Photo/David Zalubowski)

It’s probably just an error in the coding.

Or, maybe the programmers are obsessed with the book “Ready Player One” and it’s an elaborate Golden Knights’ Easter egg.

Regardless, when EA Sports released the trailer last month for its “NHL 18” video game, the Knights’ computer-generated players were wearing black gloves.

And when the expansion team unveiled its jersey numbers Wednesday in a video produced by EA Sports, the black gloves were back.

What the heck happened to the white gloves?

Both videos showed the Golden Knights in their dark uniforms, so maybe the white gloves only come out for games away from T-Mobile Arena.

The mystery of the Knights’ multicolored mitts will be solved soon, as training camp gets underway Thursday when rookies report to City National Arena. The main camp officially begins Sept. 14.

1. Which defensemen will the team keep?

News flash: the Knights have a logjam of players along the blue line.

The team’s roster lists 13 defensemen, 11 of whom are under NHL contracts, according to CapFriendly.com. (Six or seven defensemen dress each game.)

That doesn’t include promising 22-year-old Shea Theodore. Or 24-year-old Colin Miller. Or Clayton Stoner and his $3.25 million cap hit.

Expect Golden Knights general manager George McPhee to try to move one or two players prior to the start of the regular season.

2. How quickly can Vadim Shipachyov adjust to the NHL?

The Knights will rely heavily on the 30-year-old Russian, who signed a two-year, $9 million free-agent contract in May.

Shipachyov was third in scoring last season in Russia’s Kontinental Hockey League with 26 goals and 50 assists, and he led SKA St. Petersburg to the KHL title.

If Shipachyov puts together a 70-point season like ex-KHL player Artemi Panarin did with Chicago in 2015-16, the Knights’ offense could be surprisingly productive.

Fleury was selected from Pittsburgh in the expansion draft to be the Knights’ No. 1 goaltender and face of the franchise in its infancy.

But the three-time Stanley Cup winner also turns 33 in November, and last season he finished with his highest goals-against average (3.02) since his second year in the league.

Pickard, 25, was Colorado’s second-round pick in 2010 (No. 49 overall) and the first player selected by the Knights in June’s expansion draft.

He posted a 2.98 GAA in 50 appearances last season for the woeful Avalanche, who had a league-worst 48 points.

NHL rules prohibit goaltenders from being designated an on-ice captain. So, Fleury is out.

Defenseman Deryk Engelland is a longtime valley resident. At 35, he is the Knights’ oldest player and a valuable resource for teammates adjusting to life in a new city.

Neal was an alternate captain for three seasons in Nashville. And Smith wore an ‘A’ for the Panthers late in the 2015-16 season when current Golden Knights coach Gerard Gallant was in charge in Florida.

5. Do any first-year players (aside from Shipachyov) have a shot to make the team?

Top draft picks Cody Glass and Nick Suzuki are almost certain to return to their major junior teams this season.

Erik Brannstrom would have gotten a long look considering the Knights’ lack offensive-minded defensemen, but he already is with his professional team in Sweden.