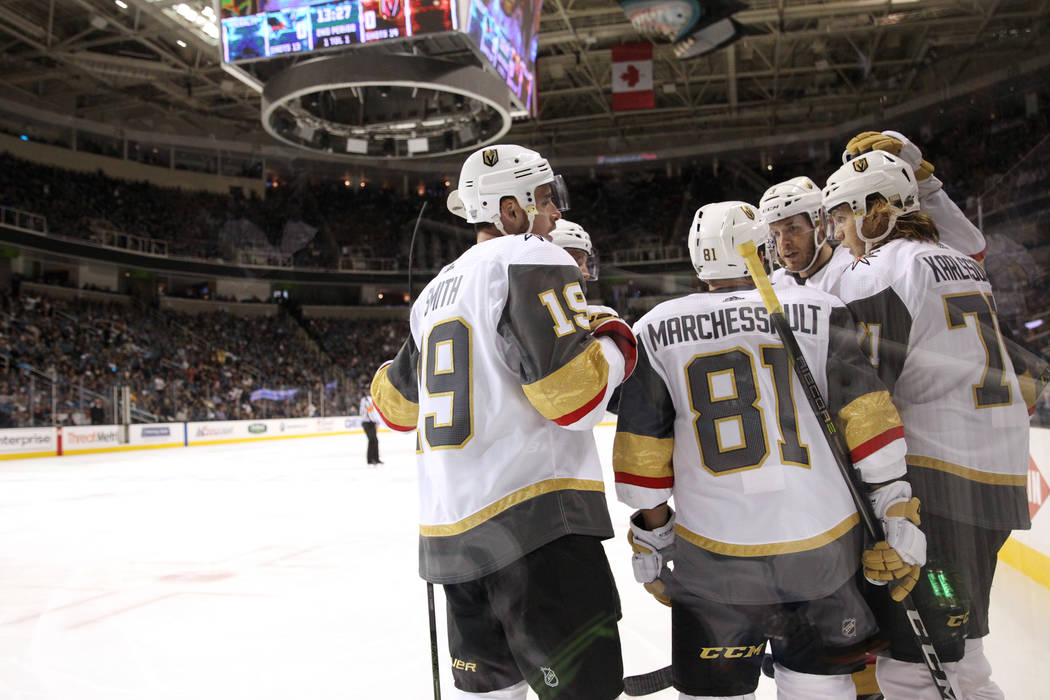 Vegas Golden Knights center Jonathan Marchessault (81) celebrates his score with his team against the San Jose Sharks during the second period in Game 6 of an NHL hockey second-round playoff series at the SAP Center in San Jose, Calif., Sunday, May 6, 2018. Erik Verduzco Las Vegas Review-Journal @Erik_Verduzco 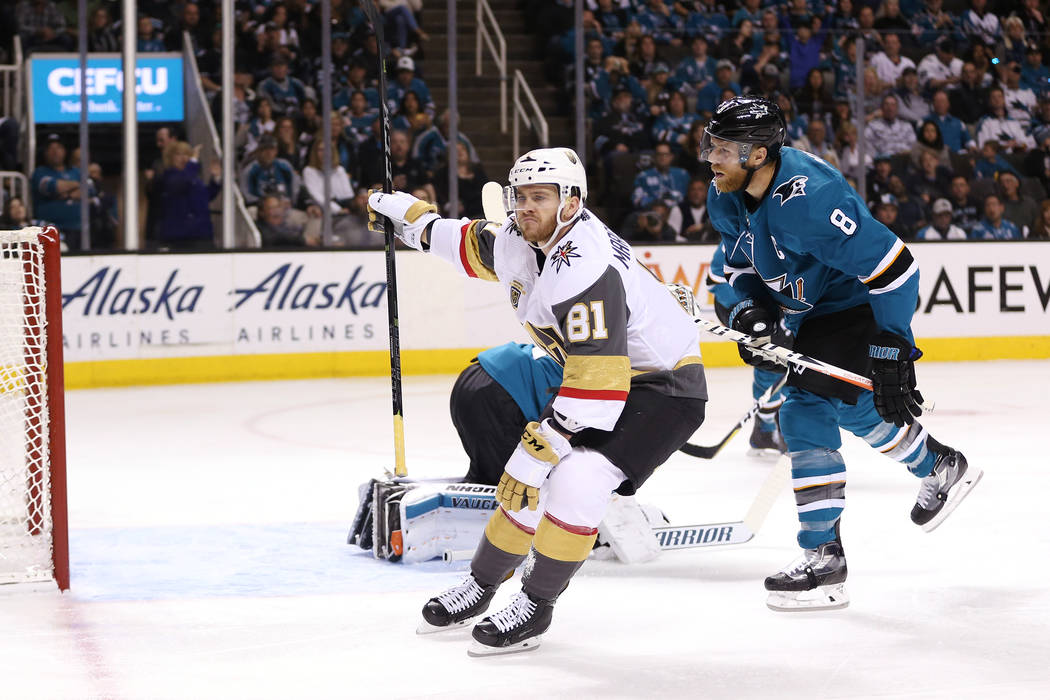 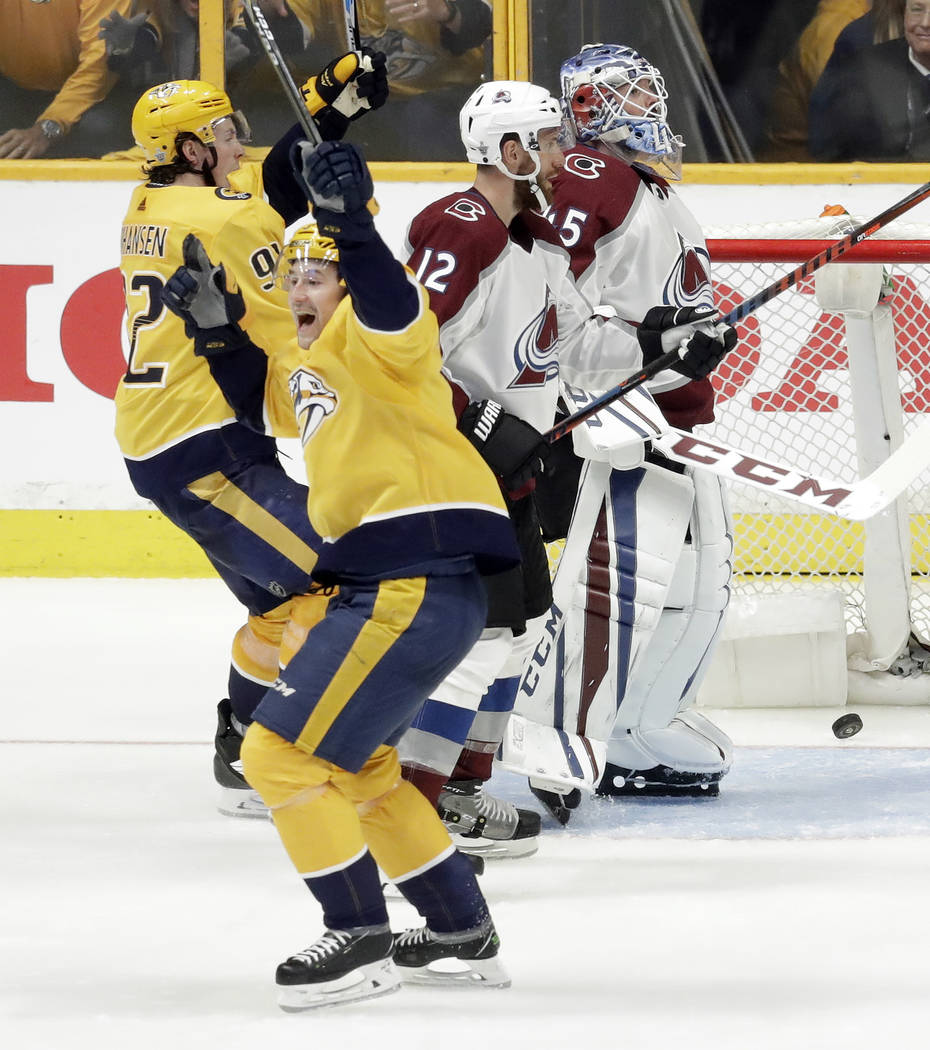 Whatever plans the Golden Knights might have had for Thursday night were canceled.

They’ll be in front of a TV.

“Oh, yeah. For sure I’m going to watch it,” forward Jonathan Marchessault said.

Nashville hosts Winnipeg on Thursday in Game 7 of their Western Conference semifinal, with the Knights awaiting the winner in the next round.

The Knights already have scouted both teams in anticipation of the conference final. But they’re not about to pass up a chance to grab a little more information prior to Game 1 on Saturday.

“You watch the game as a fan, but then you’ll pick a few things out,” Knights coach Gerard Gallant. “But, again, there’s no secrets anymore. We’ve watched their six-game series as coaches and took out clips that we’re going to show to our team to get ready. And we’ve played both of those teams three times, so, shouldn’t be any surprises.”

Here are five things the Knights will keep an eye on when they tune in for the first-ever Game 7 in Nashville:

1. Which goaltender gets hot?

Nashville’s Pekka Rinne and Connor Hellebuyck of the Jets are finalists for the Vezina Trophy as the league’s top goaltender. But their play in the series has been inconsistent.

Rinne was shelled for six goals before he was pulled in Game 5 — the second time he’s been yanked in the series — then shut out Winnipeg with 34 saves in Game 6. Hellebuyck settled down after allowing five goals in a double-overtime loss in Game 2.

“I’m not going to give away my trade secrets, especially with goaltenders,” forward Alex Tuch said. “(Rinne) was one of my favorite goalies growing up. I used to love watching him play. And Hellebuyck, he was a little bit ahead of me so I didn’t play against him in Hockey East, but he had a lot of success there and he’s really done an unbelievable job this year.”

2. Whose top line takes over?

Predators wing Filip Forsberg is a budding star, and his stick-between-his-legs goal Monday was his latest to be made into a viral GIF. Forsberg’s line, which includes Viktor Arvidsson and Ryan Johansen, produced all four Nashville goals in Game 6.

Winnipeg captain Blake Wheeler has eight points in the Jets’ three wins over Nashville and one point in their three losses.

“They’re two pretty fast teams,” defenseman Shea Theodore said. “They’re physical. They play the game really well, and watching them play in the playoffs has been really good to be able to see how they play and see some of their key attributes.”

Winnipeg owned the league’s No. 5 power play during the regular season with a 23.5 percent conversion rate.

But Nashville’s penalty kill has contained Wheeler and playmaker Mark Scheifele and produced a short-handed goal, too. The Predators are aggressive even when down a man and were tied for third with 10 short-handed goals in the regular season.

“Winnipeg, great power play,” Miller said. “They’ve got a lot of (right-handed shots), so it’s a little bit of a different look. But they’re both similar. Big shots up top and good snipers in low. It’s going to be tough either way.”

Jets right wing Patrik Laine finished second in the league with 44 goals, and the 20-year-old from Finland is touted as the league’s next great sniper.

He’s been held to one goal and five points in the series versus Nashville while primarily matched up against Predators defensemen Roman Josi and Ryan Ellis.

“He’s got such a long reach and can shoot it from anywhere,” Knights defenseman Nate Schmidt said of Laine. “He creates just enough space for himself to shoot so you’ve got to try and get on top of him as soon as he gets the puck.”

One of Nashville’s strengths is its skill and mobility on the blue line. P.K. Subban is a finalist for the Norris Trophy as the league’s top defenseman and is paired with Mattias Ekholm.

Subban has three goals in the series, but Ellis, in particular, has struggled to get on the scoresheet with two assists in the six games.

“No defenseman wants to go back and chase pucks so you want to pressure them and not let them use their speed and get going,” Knights forward Ryan Carpenter said. “You want to be physical with them but not take any penalties.”