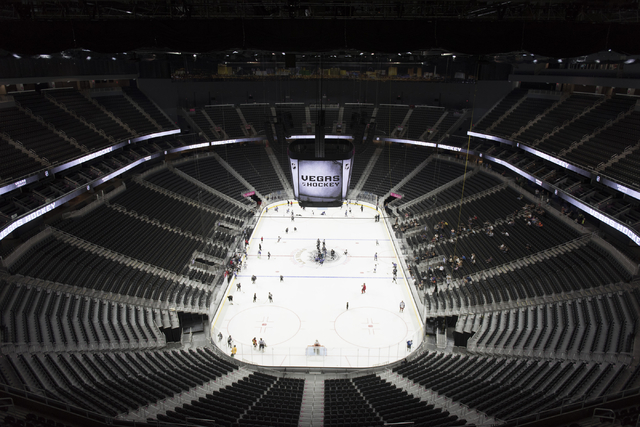 The Red Hawks and Desert Hawks have been eliminated, but the Nighthawks still are in play as a potential name for Las Vegas’ NHL expansion team.

Owner Bill Foley refuted internet reports Friday that the team has decided against “Hawks” in the name after it was reported Thursday that Black Knight Sports and Entertainment had legally secured the three names.

“Not true,” Foley said from California. “Nighthawks is still a name we’re considering, though we are probably not going to go with the others (Red Hawks and Desert Hawks).”

Foley added that two other names have been submitted for copyright, trademark and domain rights with the United States Patent and Trademark Office. Those names, which he would not reveal, also would be in play pending a final decision in the coming days.

“Somebody will eventually figure it out, but I want to wait for the paperwork to be processed,” Foley said, alluding to those who are attempting to poach possible nicknames and then sell them back to him. “I hope we’ll have that paperwork done fairly quickly. I want to spend my money on hockey players, not on team names.”

Foley said he’s not sure where the idea emerged that he had eliminated names with “Hawks,” other than some Chicago Blackhawks fans had voiced displeasure on social media.

“It’s two completely separate things,” Foley said. “The Blackhawks are about a Native American tribe. Nighthawks honors a bird that is in Las Vegas and a fighter aircraft from an Air Force base in Las Vegas (Nellis). I think Nighthawks is a beautiful name.”

Foley said the NHL is aware of the name situation and that there has been no pushback by the league or the Blackhawks’ organization against Nighthawks.

“I haven’t heard from the Chicago Blackhawks, but I’m sure we can work with them if they have any objections,” Foley said.