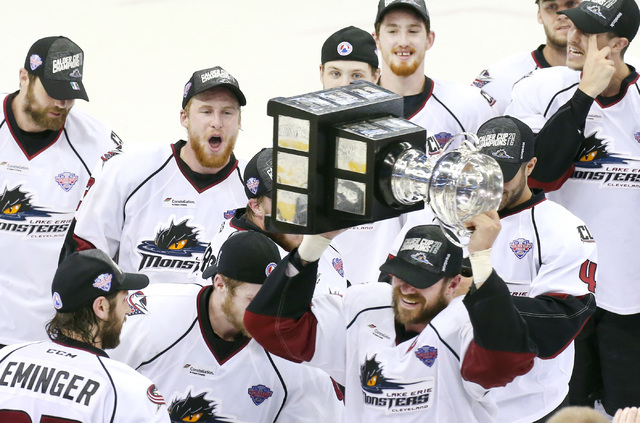 When Bill Foley pursued his dream to own an NHL team, he knew it didn’t begin and end in Las Vegas.

The billionaire businessman also knew he’d have to secure a minor league affiliate in the American Hockey League, the NHL equivalent of the Triple-A minor league. With Las Vegas preparing for its inaugural NHL season in 2017, work has begun on searching for a AHL affiliate — his own or one to share.

The last time the NHL had to deal with this was in 2000 when Minnesota and Columbus joined the league and both the Wild and the Blue Jackets needed to find minor league affiliates. At the time, there were two “Triple-A” hockey leagues — the AHL and the International Hockey League.

The Blue Jackets opted for the AHL, putting their affiliate in Syracuse, New York. The Wild went to the IHL, affiliating with Cleveland. Both teams went it alone in their inaugural season and have changed their affiliate cities a couple of times over the years. Columbus is currently in Cleveland with the Cleveland Monsters and Minnesota is in Des Moines, Iowa, with the Iowa Wild.

Foley has had preliminary discussions with AHL president Dave Andrews and team senior vice president Murray Craven is overseeing the process by which the farm team will be established. It is expected to cost Foley around $5 million to join the AHL if he opts for his own team, far less if he partners with another NHL team early on. Foley paid a record $500 million to join the NHL after the league awarded him his franchise on June 22.

“It’s like building another team from scratch, only cheaper,” Craven said of a start-up AHL team.

Foley said he is contemplating sharing an affiliation at the start, then eventually going his own way once Las Vegas has enough players to stock its own roster and that of whatever ECHL team it eventually ties into. Foley has had extensive talks with an NHL team — he wouldn’t say which — about sharing the AHL affiliate for 2017-18. He did say the NHL team he’s considering doing business with owns its AHL team.

In that case, it’s likely the Ontario Reign, which is owned by AEG, the company that owns the Los Angeles Kings. Or it could be the San Diego Gulls, a team owned and operated by the Anaheim Ducks. Foley has forged friendships with the ownership of both the Kings and the Ducks. However, the other six AHL teams that play in the Western Conference’s Pacific Division are also owned by their NHL affiliates.

“We’re still trying to figure out what we want to do,” Craven said. “The choices (for expansion) aren’t that numerous.”

At the moment, Las Vegas doesn’t have many options if it wants to go it alone. Especially if the team wants its affiliate in the West.

Reno, which would make the most sense given its proximity to Las Vegas and a chance to keep the team’s hockey operation in-state, is out because the Reno Events Center doesn’t have the ability to make ice, according to operations manager Steve Markwell. Ditto for Sacramento, where the Golden 1 Center opens next month as the new home of the NBA Kings and was built with basketball, not hockey, in mind.

Fresno, California, does have the ability to host hockey at Selland Arena. But arena general manager Bill Overfelt said he has not been contacted by anyone from Las Vegas. He added the city is not willing to pitch in financially to make that happen.

“In talking to the city manager, the city of Fresno is not going to subsidize another sports team,” Overfelt said.

Riverside, California, has had discussions about building an arena that would potentially be an ideal location for a Las Vegas AHL team. But nothing has been decided and the arena wouldn’t be ready for 2017.

Salt Lake City and Boise, Idaho, both already have hockey teams as the Utah Grizzlies and Idaho Steelheads are in the ECHL. Steelheads president Eric Trapp said he hasn’t heard from Foley.

“I have no knowledge of anything,” he said. “We haven’t been contacted by anyone from Las Vegas. But if someone contacted us, we’d take a look at it.”

There’s the possibility another NHL team could move its AHL affiliate, leaving that market open for Las Vegas. But it wouldn’t be close to Southern Nevada. The Vancouver Canucks currently have their AHL team in Utica, New York. They might want to move to a closer location. The Colorado Avalanche have their AHL team in San Antonio, Texas.

“The whole AHL Western Conference is still developing,” Craven said. “What’s Colorado going to do? What’s Vancouver going to do?”

When asked if the team would put its AHL affiliate in Las Vegas, Craven quickly rejected the idea.

“I think we’d be better served having our affiliate elsewhere,” he said.

The AHL has not given a deadline. Craven, who would like to have a decision by early 2017, said it’s still early in the process but the team’s minor league affiliation is a front-burner item.

“It’s an important piece of the operation,” he said.

“I’m not going to speculate where they’re going to go or what they’re going to do,” he said. “But I’m confident Las Vegas will have worked out a solution and we’ll accommodate them in any way when the time comes and they’ve submitted their proposal to us.”