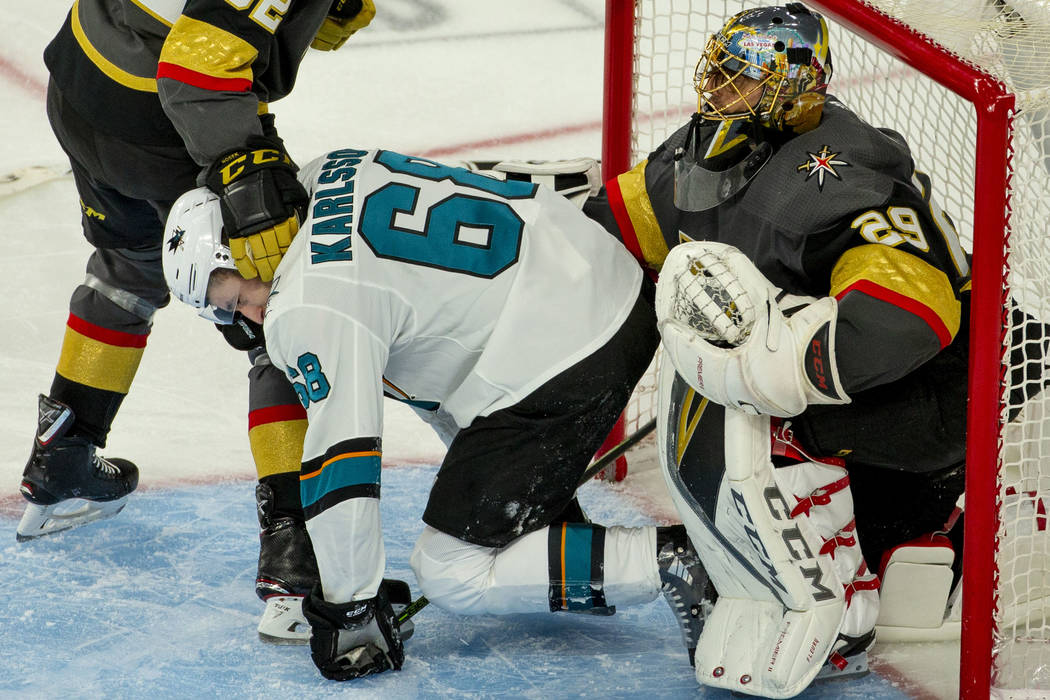 SAN JOSE, Calif. — Brad May’s phone rings a little more often than normal at this time of year. And his social media account blows up with stories from hockey fans across the globe.

The rugged forward played more than 1,000 games over 18 NHL seasons and his name is on the Stanley Cup as a member of the 2007 Anaheim Ducks.

But May, who serves as a studio analyst on the Golden Knights’ television broadcasts, is best remembered for his iconic playoff overtime winner — “May Day! May Day!” — with the Buffalo Sabres 26 years ago Wednesday.

“This is where careers are made. Legends are made in moments like this,” May said in a phone interview Monday afternoon .

“Who wants to be that guy?”

The Knights have a chance to create their own indelible postseason image when they play the first Game 7 in franchise history Tuesday against the San Jose Sharks at SAP Center.

Will they rise to the occasion, or shrink in the face of potentially blowing a 3-1 series lead in the best-of-seven Western Conference quarterfinals?

“Everybody knows there’s no tomorrow after tomorrow,” coach Gerard Gallant said Monday. “Both teams are facing elimination, so the urgency for both teams is going to be as high as it can get. I told you before the game (Sunday) it was going to be the best game of the series and it was. I think the next game is going to be a great game, too. That’s what I would expect.”

May scored his signature goal April 24, 1993, in Game 4 of the opening round of the playoffs, and it remains etched in Buffalo sports lore for several reasons.

May was an unlikely hero, as he went the final 27 games of the regular season without scoring. He slipped the puck through the skates of Hall of Fame defenseman Raymond Bourque before lifting a forehand shot over Bruins goaltender Andy Moog.

Sabres play-by-play announcer Rick Jeanneret’s famous call of “May Day! May Day!” as the Sabres celebrated their first playoff series win in 10 seasons added to the lore.

“Can you imagine what it would be like to walk down Las Vegas Boulevard after scoring in a Game 7? They’d be a superstar. Unforgettable,” May said.

May forged a reputation as a big-game player in part due to his famous OT goal, and played in five Game 7s during his career.

He noted that certain players rise to the challenge of a winner-take-all game, while others fold under the pressure-packed environment.

“The challenge is to stay in the moment and not get caught looking too far ahead,” May said. “This is what every player dreams about as a kid. I don’t want to say it’s just another hockey game because the ramifications are huge. But the mental aspect, they’ve been in the postseason 1,000 times in their basement or their mind.”

The Knights, who must shake off Sunday’s 2-1 double-overtime loss, have some Game 7 experience to draw on.

Goaltender Marc-Andre Fleury has a record of 3-3 in Game 7s, including a Stanley Cup-clinching victory in 2009 and a 29-save shutout of Washington in the 2017 Eastern Conference semifinals.

Center Paul Stastny has four goals and four assists in four career Game 7s, and he scored twice in Winnipeg’s victory over Nashville last season to clinch its semifinal series.

Even Gallant played in three Game 7s during his career and was credited with the game-winning goal in Detroit’s 5-2 victory over Minnesota in 1992.

“We’re not like an ordinary second-year team,” Gallant said. “We’ve got a lot of veteran players. Been there before, done that before. Hopefully that will work out to our advantage. And they’re a veteran team, too.”