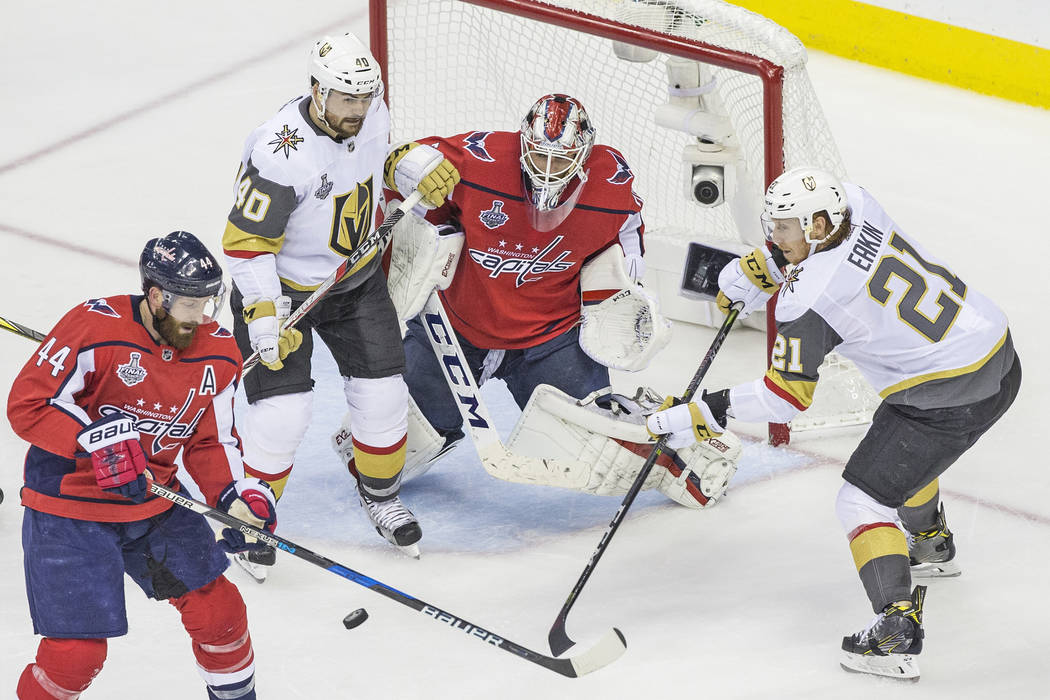 WASHINGTON — The Golden Knights came out of the visitors locker room Monday night throwing the kind of haymakers expected from a team hoping to avoid falling into a 3-1 hole in the Stanley Cup Final.

Yet after a nine-minute onslaught to open Game 4, Vegas still found itself in a scoreless tie thanks to Braden Holtby and a bit of misfortune.

The goaltender’s stellar play helped the Capitals weather that early storm, before they unleashed a three-goal barrage in the final 10:06 of the first period on their way to a 6-2 win. The Capitals can hoist the franchise’s first Stanley Cup in Game 5 on Thursday at T-Mobile Arena.

Holtby made 11 saves in the first period, several of them spectacular. He was also the beneficiary of the Knights hitting the post at least twice, including a point blank chance from James Neal into an empty net that rattled off the inside of the post.

“It was a weird start to the game,” Washington center Nicklas Backstrom said. “It could have been a different hockey game if they scored on their power play, so we got a little lucky there. I don’t know, maybe it shouldn’t have been a 3-0 lead after the first period, but you know we will take it. We are not going to feel sorry for them.”

Evgeny Kuznetsov, who had four assists to become the 12th player in NHL history to perform the feat in a final game and first since 1996, believed keeping Vegas out of the net early provided the spark Washington needed.

“When guys miss an empty net or a goalie makes a great save, it always gives you positive emotion,” he said. “It’s a wake-up call. That was probably the biggest thing in the first period. Then as soon as we had a chance, we scored a goal. That’s huge.”

The Capitals finally got a breather when Colin Miller was called for tripping at 9:22 of the first period. Washington converted on the power play 32 seconds later when Kuznetsov found Oshie with a cross-ice pass.

Kuznetsov now has 31 points in the postseason, tied for the second-most in a single year since 1997 with Sidney Crosby in 2009.

Holtby allowed two goals late, but has put up some impressive numbers in big stretches of the series. Through the first two periods of Monday’s game, he had stopped 59 of the last 60 shots he faced over the previous 122:13 of game time dating to Game 2.

That included an outright robbery of Alex Tuch in Las Vegas to preserve a lat lead. It looked like he had made a similar save early in Game 4, but replays showed Neal had hit the post.

“We obviously got some breaks at the start of the game,” said Holtby, who finished with 28 saves. “To be honest, I thought (Neal’s shot) was in (from) my angle, and somehow it didn’t go in. I thought we worked for our breaks tonight, though. They came out hard, but in saying that we know there’s some areas we can look at over the next couple days and touch on and improve. We know they’re going to keep pushing forward. We want to do everything in our power so we don’t need breaks to win.”

Washington coach Barry Trotz insists he isn’t allowing his mind to start thinking about the reward that will come with one more victory.

“Nope, not at all,” he said, pointing out what the Knights are capable of when they are playing their style. “There’s a proud team over there and I thought they really played quite well. They stayed to their identity the first five or six minutes. They came hard and that’s part of their DNA. They’re a quick start team. You know that and we survived it and they had some chances and didn’t convert and then I thought we balanced out a little bit.”