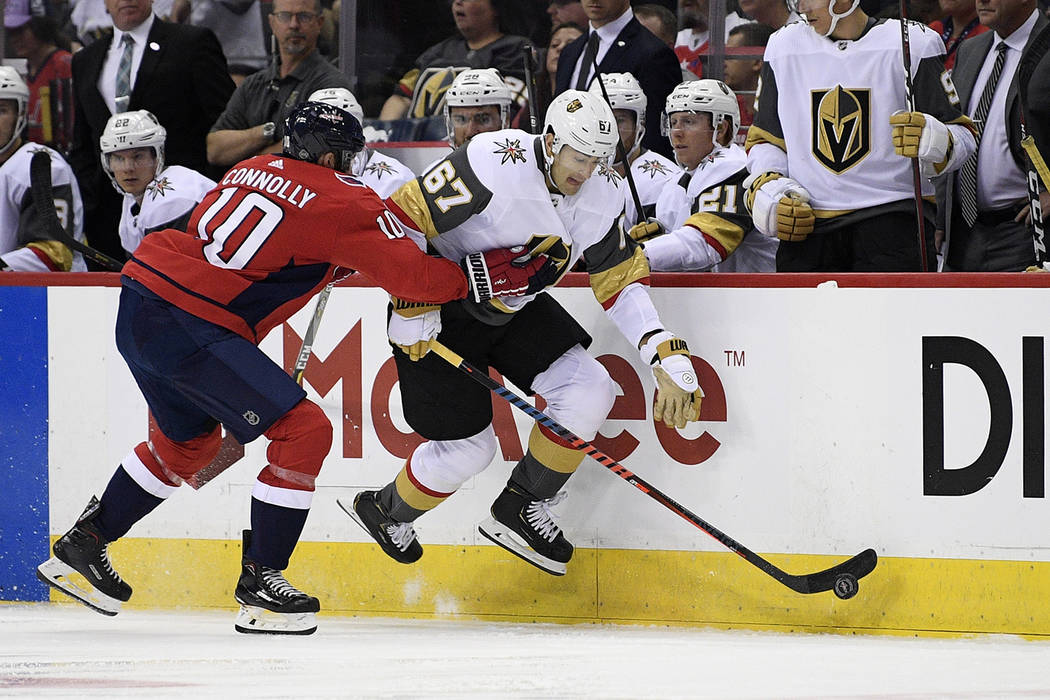 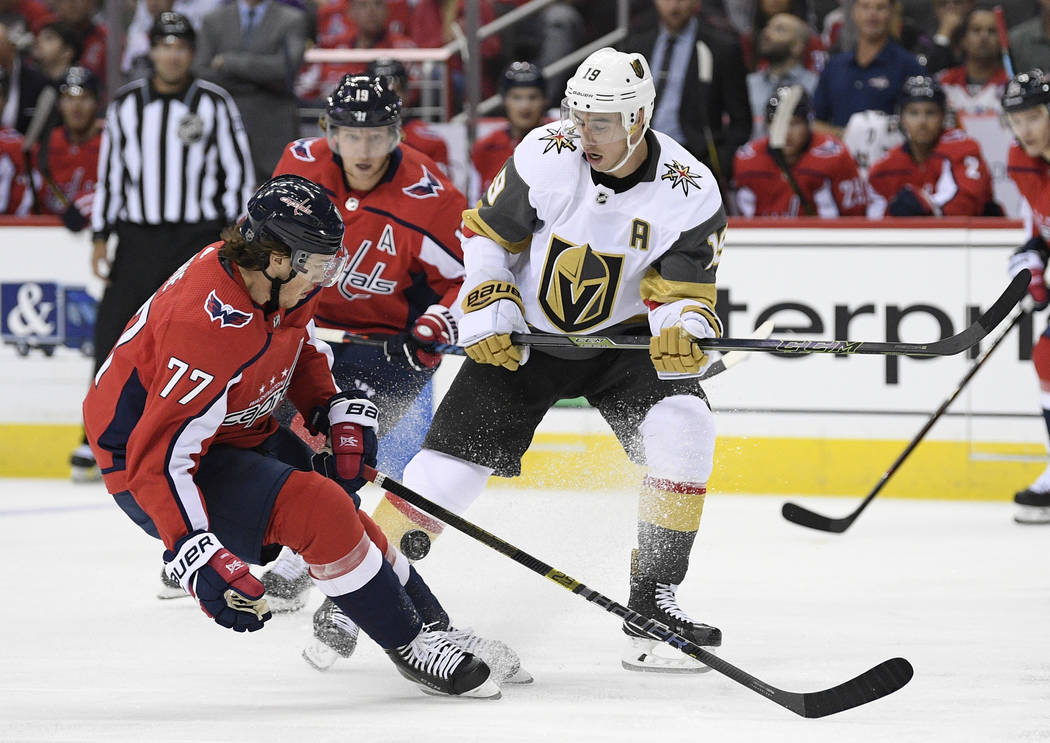 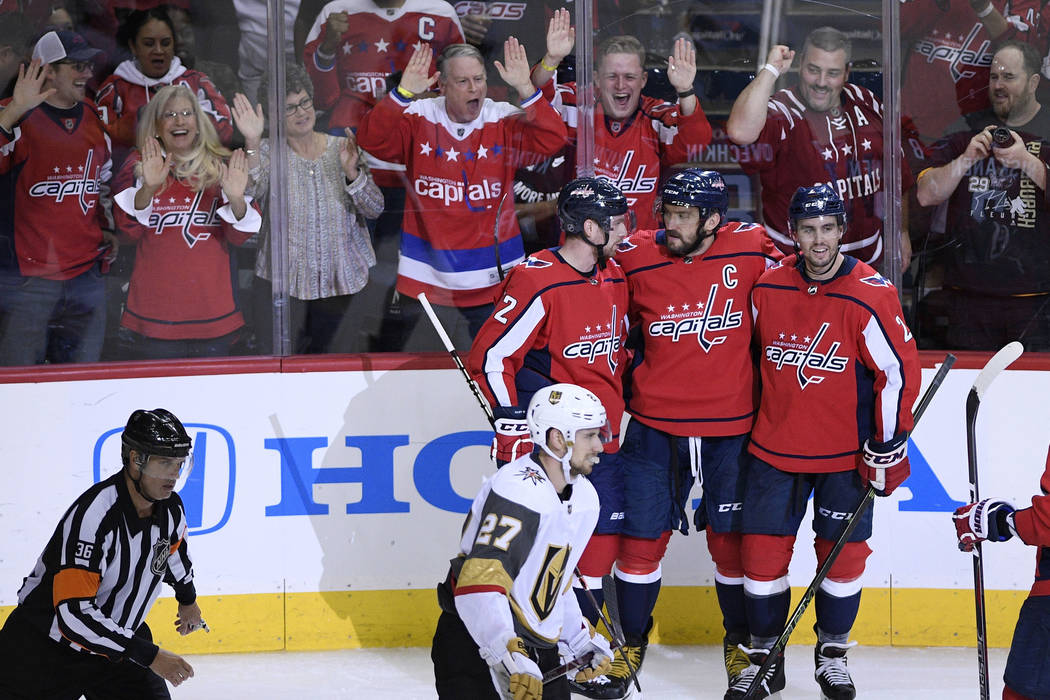 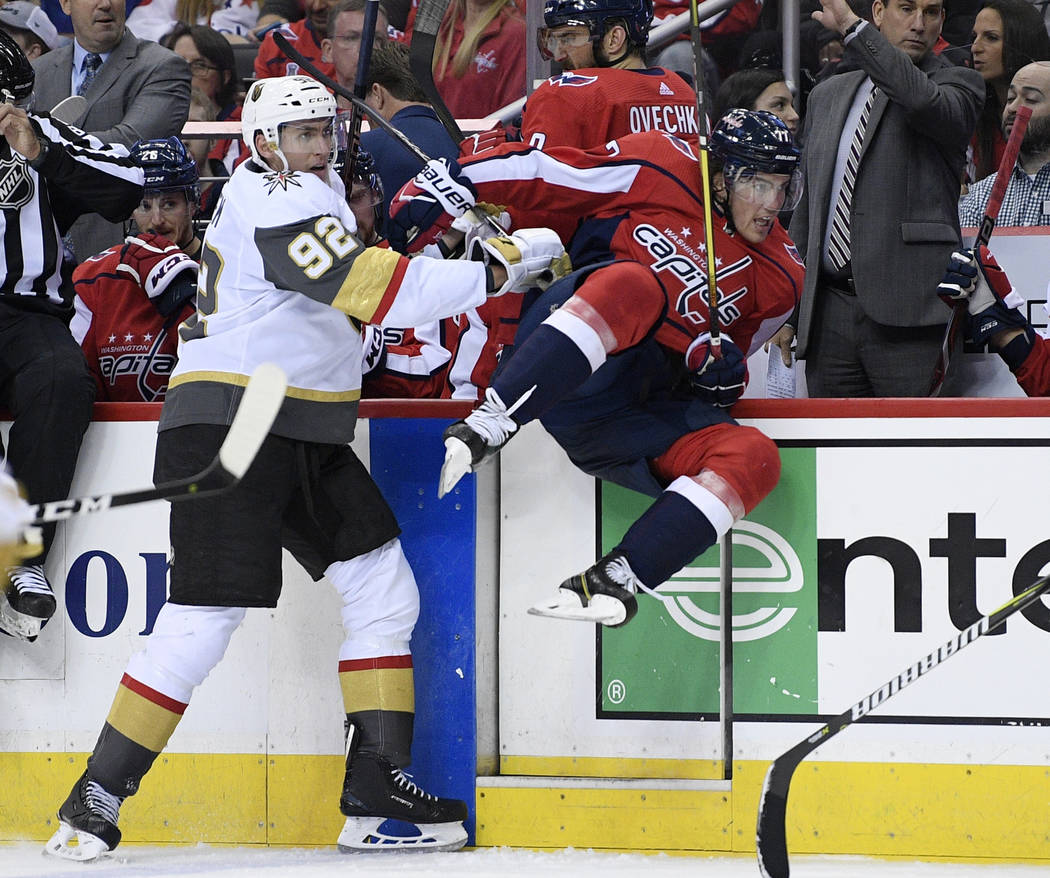 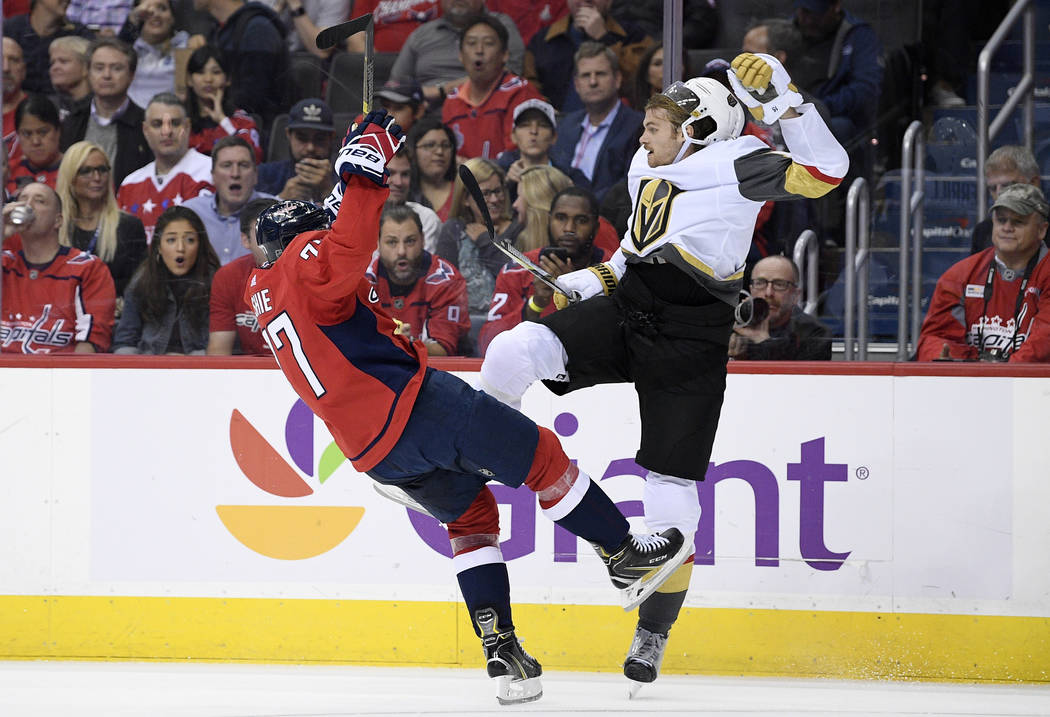 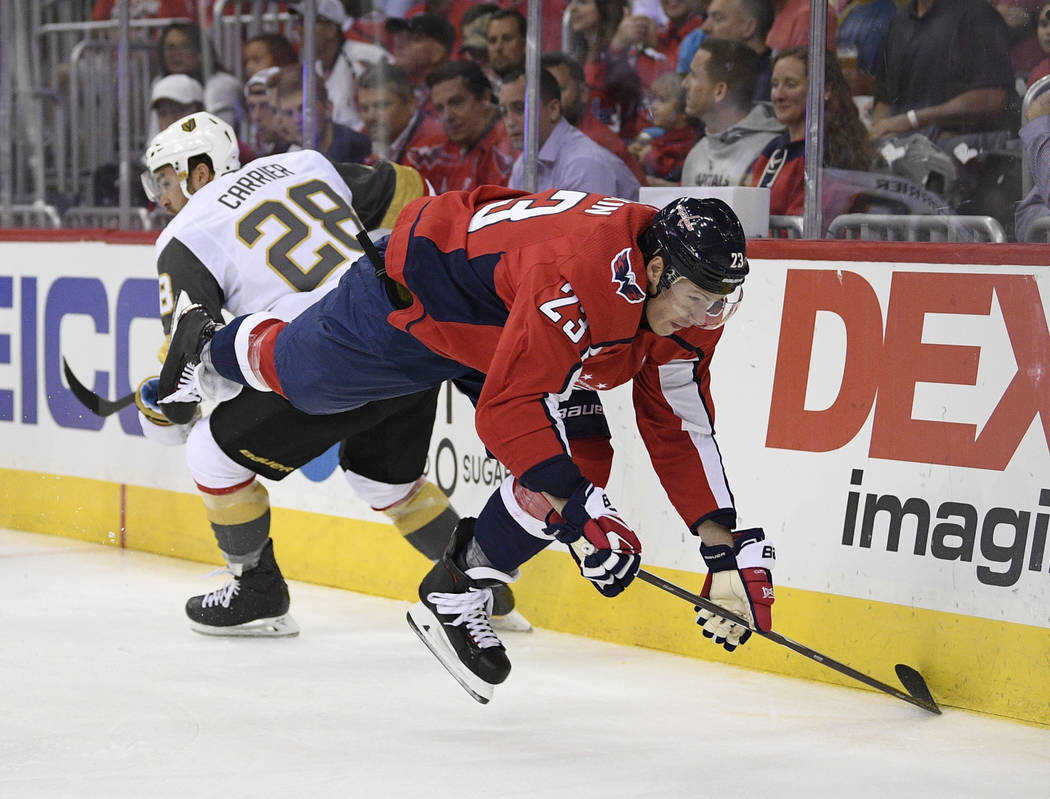 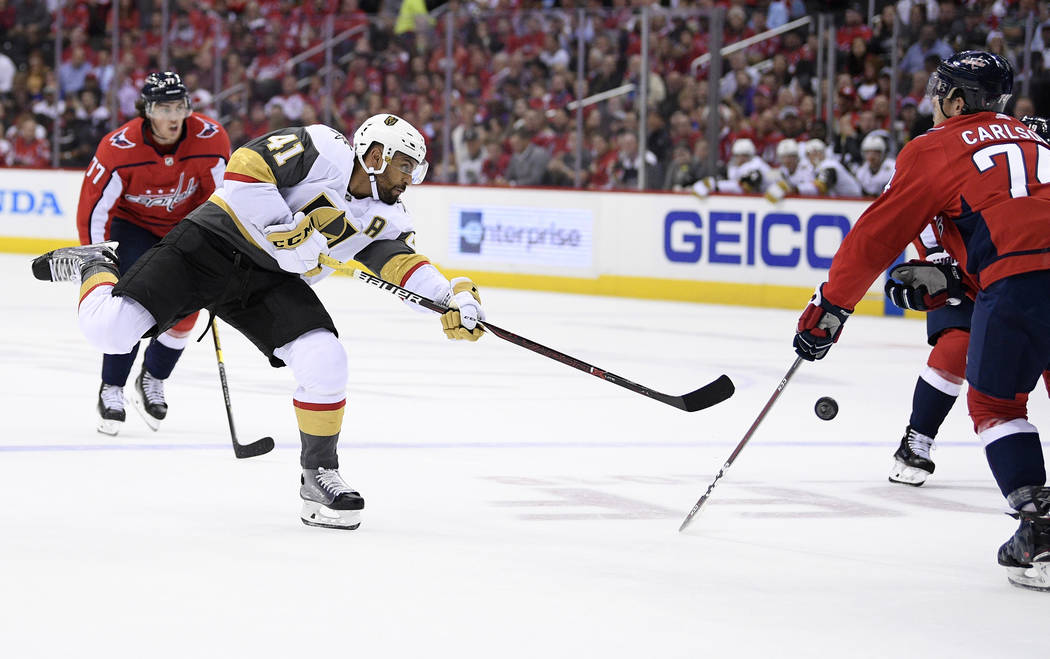 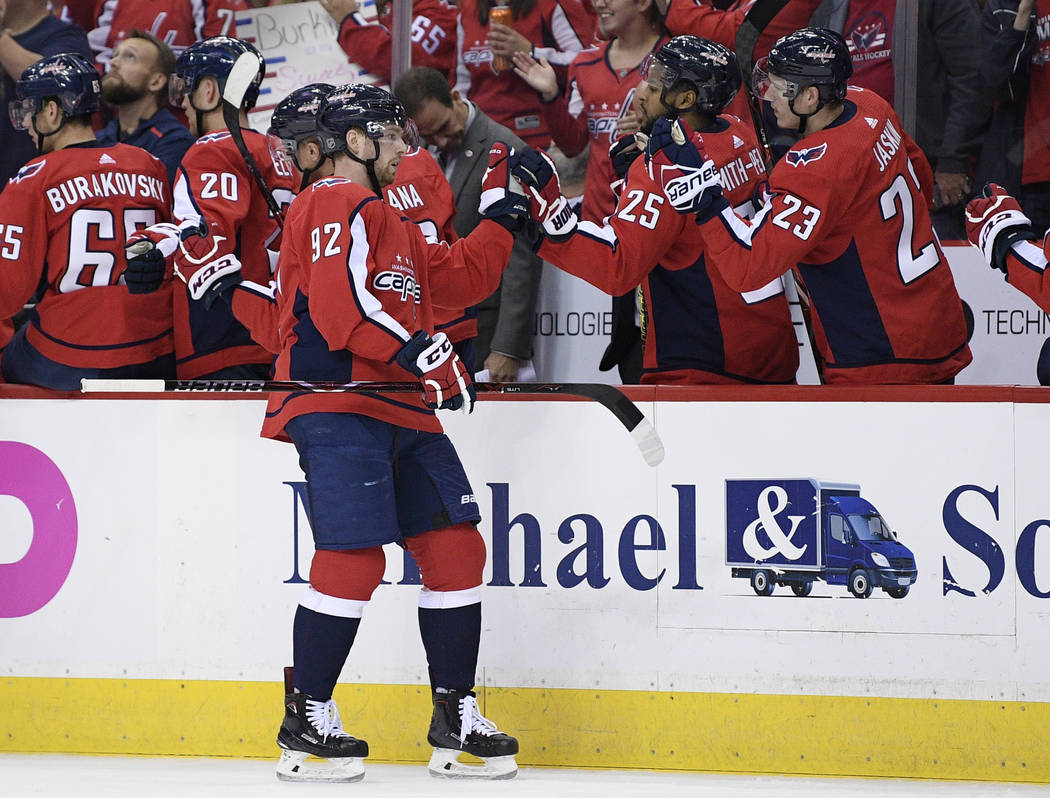 Washington Capitals center Evgeny Kuznetsov (92), of Russia, celebrates his goal with teammates on the bench during the first period of an NHL hockey game against the Vegas Golden Knights, Wednesday, Oct. 10, 2018, in Washington. (AP Photo/Nick Wass) 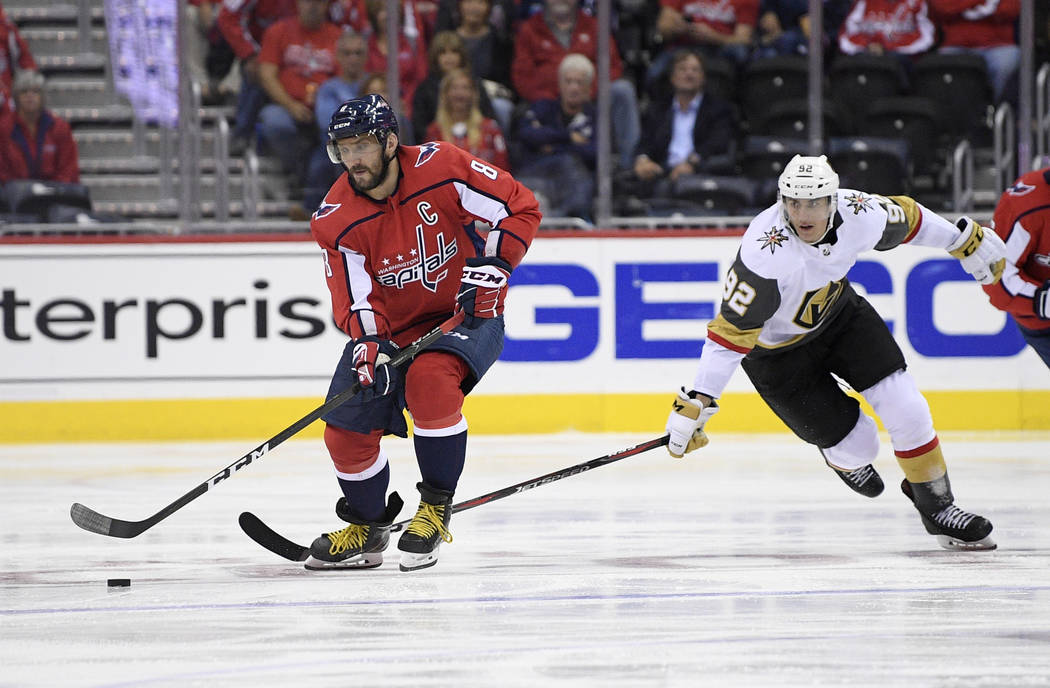 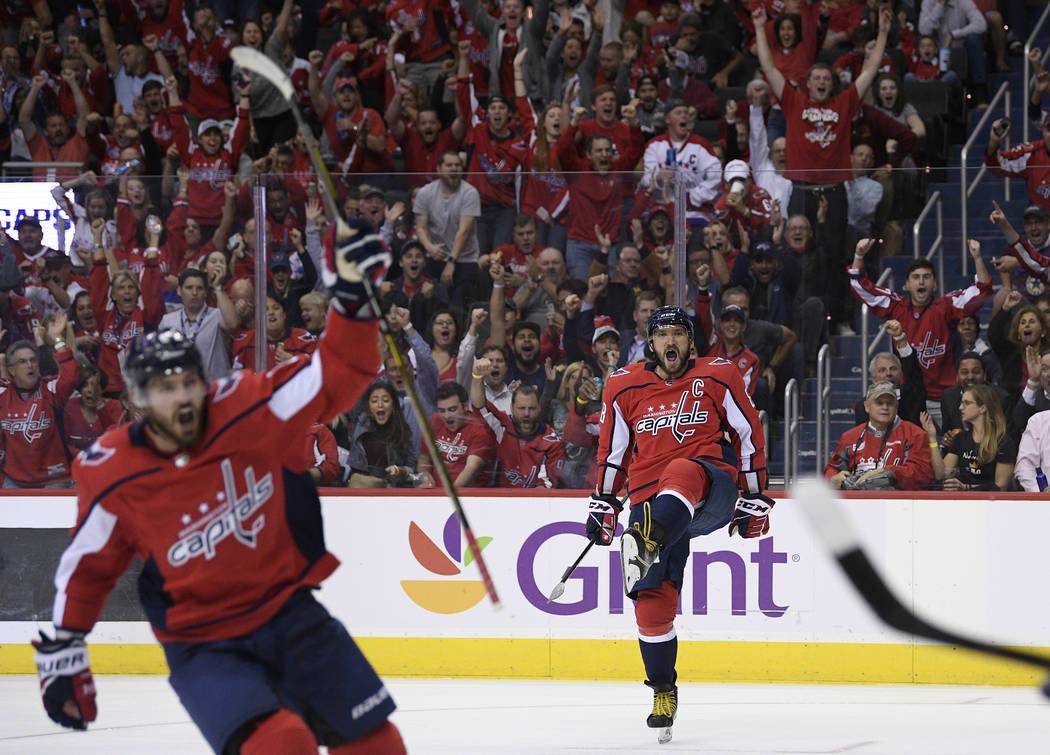 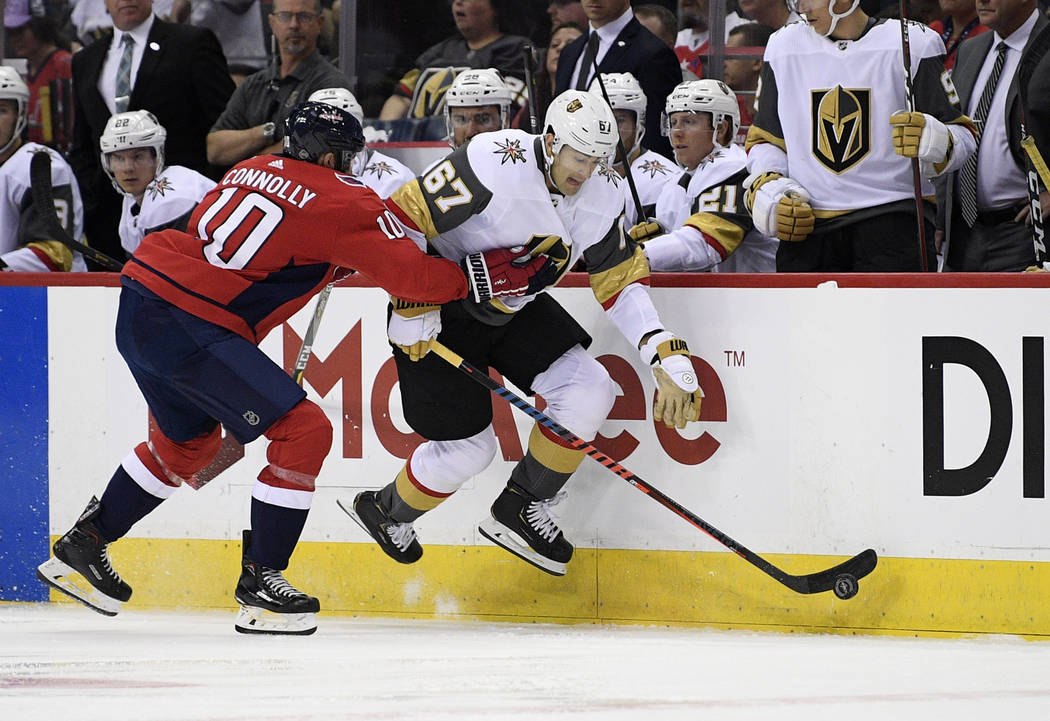 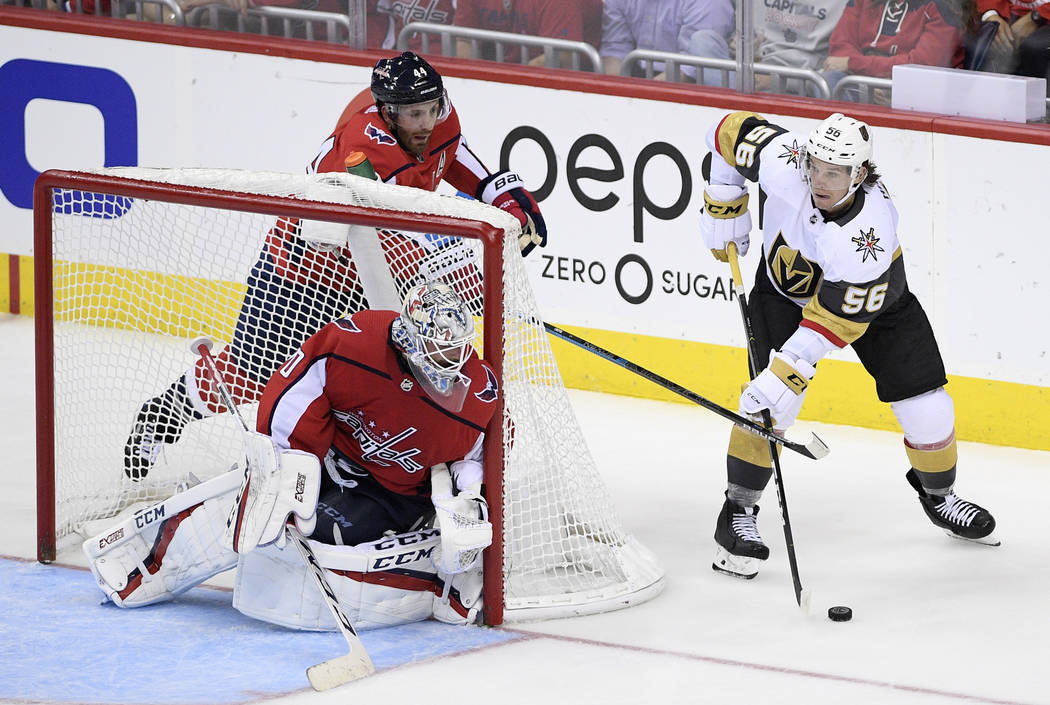 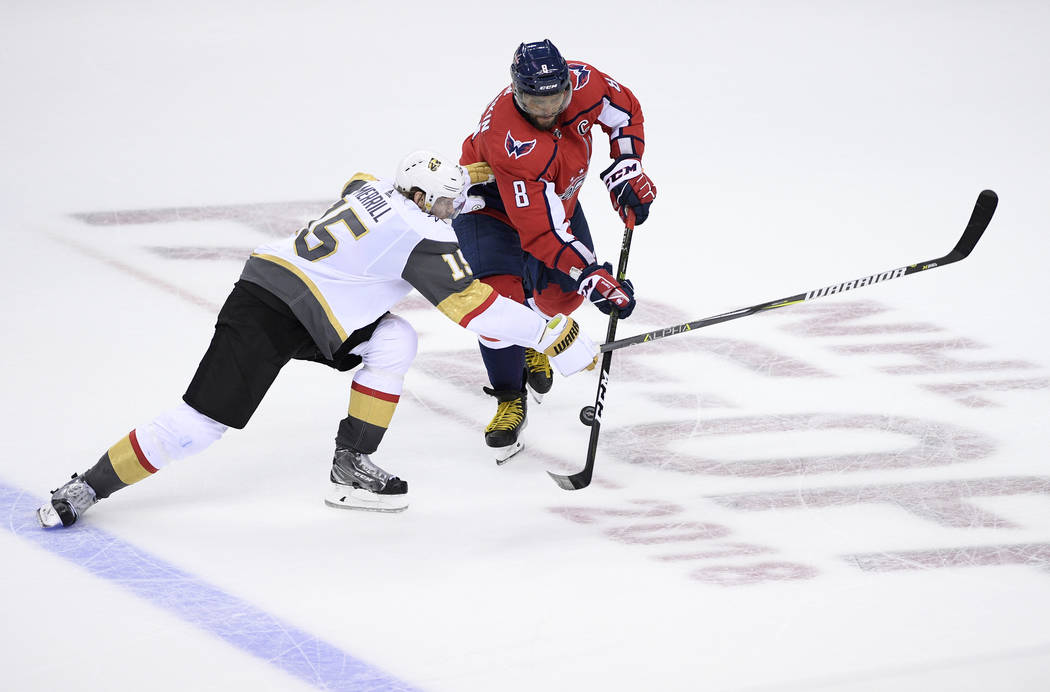 WASHINGTON — Here is a quick sampling of comments from the Golden Knights’ last visit to Capital One Arena after the loss in Game 4 of the Stanley Cup Final.

From coach Gerard Gallant: “We had some good chances, and we got nothing out of it.”

From center Pierre-Edouard Bellemare: “I liked the jump we had, and I like the way we played.”

Here is a quick sampling of comments after Wednesday’s rematch against the Washington Capitals.

From Gallant: “I thought we played a real good game 5-on-5. We had lots of scoring chances.”

From center Cody Eakin: “I thought we did a lot of good things. We controlled the pace a lot of the game.”

Just as they did here four months ago, the Knights outplayed Washington for large stretches of the game but had nothing to show for their effort in a 5-2 setback.

Eakin scored in his season debut and Reilly Smith added a third-period goal for the Knights in the teams’ first meeting since Washington won the Cup on June 7 at T-Mobile Arena.

It’s the third loss in four games for the Knights to open the season; they didn’t lose their third game last season until Oct. 31 in their 11th game.

The Knights continue their five-game road trip Thursday at Pittsburgh in the second game of a back-to-back.

“It’s a long year, and we have to figure out things quick,” defenseman Shea Theodore said. “Our goal from this road trip, you want to be a .500 team and when we’re playing like this, that’s not going to happen. We definitely have to work some things out and find our game.”

The Knights dropped a 6-2 decision in Game 4 of the finals on June 4 when Erik Haula and James Neal hit the post early in the first period and the Capitals went on to score three power-play goals.

The Knights hit four posts Wednesday — Jonathan Marchessault had a prime chance to tie the game 3-3 with 11:09 remaining but hit the crossbar — and struggled to contain Washington’s dangerous power play, which went 2-for-4.

“Their power play is just so dangerous because everybody on the ice can shoot,” defenseman Nick Holden said. “Kuznetsov when he has the puck, he has a lot of options and obviously his vision, his skill set, he can make a play to everybody. He reads real fast where you’re not and if you take a step the wrong way, he’s zipping it right where you’re supposed to be.”

Smith cut Washington’s lead to 3-2 with 12:52 left before Ovechkin banged in a feed from Kuznetsov a little more than three minutes later.

Max Pacioretty appeared to bring the Knights within 4-3 with 5:22 remaining, but Capitals coach Todd Rierden successfully challenged that Pacioretty was offside as the scoring play developed.

“We kept battling and we had some chances and we played hard,” Gallant said. “We played against a real good team tonight, obviously, and fell a little short.

“It’s tough. It’s a battle every game. Early in the season sometimes you’re making mistakes that you don’t usually make when you get going.”

The Knights failed to register a shot on goal for a stretch of 10:33 in the first period and trailed 1-0 when Nicklas Backstrom converted on a power play with 34.5 seconds left in the period.

Ovechkin finished off a 2-on-1 with Kuznetsov at 10:18 of the second before Eakin blew past defenseman Christian Djoos and beat Capitals goaltender Braden Holtby with a wraparound 31 seconds later.

“I thought we dicated for a long time. Back and forth a little bit,” Eakin said. “We took some penalties and missed some assignments, so hopefully we can straighten some of those things out.”