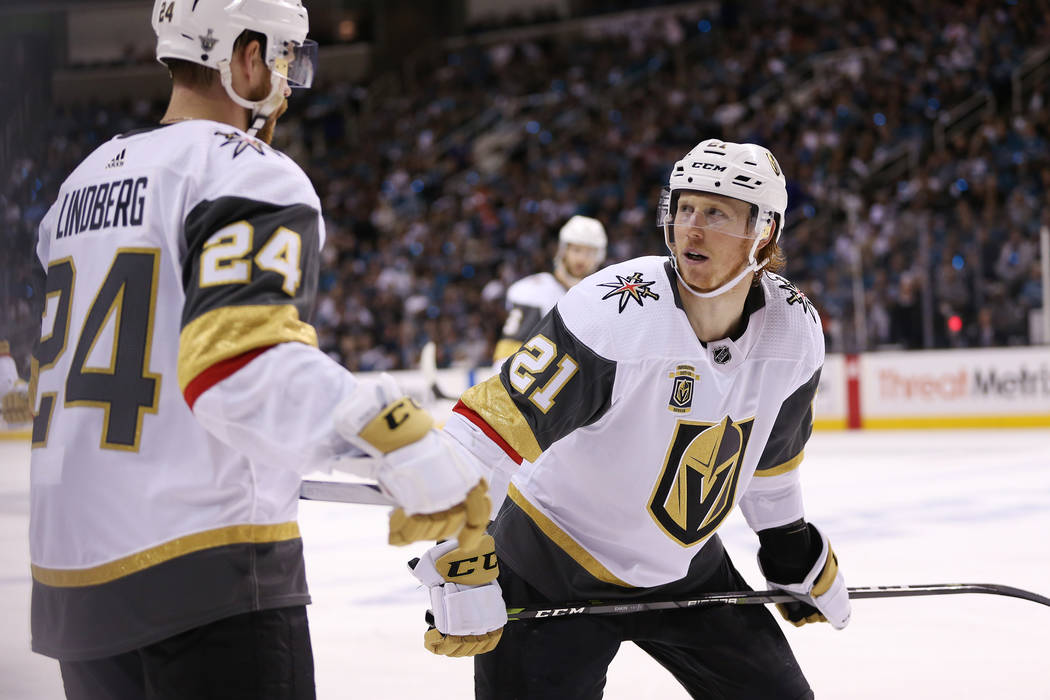 Cody Eakin has totaled three goals and four points in 13 games, but his contribution to the Golden Knights’ success in the Stanley Cup playoffs has surpassed those numbers.

He’s shooting at a high percentage. He’s winning faceoffs. He’s blocking shots. He has been stellar on the penalty-killing unit. He’s one of the team’s leaders in hits.

Whatever Gerard Gallant has asked his third-line center to do, Eakin has delivered. It’s a big reason why the Knights are carrying a 2-1 lead in the best-of-seven Western Conference Final against the Winnipeg Jets.

“This is the time of the year where you want to be playing your best hockey,” Eakin said Thursday. “The pace of play seems to increase with each round. I don’t know if it’s any one thing, but everyone knows the stakes are higher and you want to respond the right way.”

Gallant has seen Eakin come through in each playoff series. But he’s liking what he is seeing against the Jets.

“You’ve got to raise your level with each round,” Gallant said. “He’s done that.”

Eakin doesn’t have a point against the Jets through three games. What he does have is a winning faceoff percentage (62 percent), five hits, and he has not been on the ice for a Winnipeg goal.

“I’m trying to stay responsible in my end and help our D,” Eakin said. “Every mistake in the playoffs can be so critical, so I’m trying to focus on making the right plays and making sure their line doesn’t hurt us.”

Coming into this year’s playoffs, Eakin had played in 19 postseason games and had three goals and 10 assists. He matched his career total for goals after the Knights eliminated San Jose. Even with his linemates changing from Alex Tuch to Tomas Tatar after David Perron took ill after Game 1 against the Jets, Eakin has adjusted. 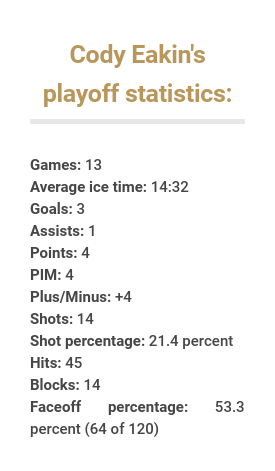 “We talked, and (Tatar) is on the same page with me and (Ryan Carpenter),” Eakin said. “He scored a big goal for us in Game 2, and he’s got fresh legs and he’s using his speed.”

Eakin has played in all of the Knights’ playoff games and thrown his 6-foot frame around without regard for who he’s hitting. He got in good third-period checks against the Jets’ Ben Chiarot and Mark Scheifele.

That’s not going to curry Eakin much favor with the fans from his hometown. But Eakin is not letting his battling the Jets become a distraction.

“The only time I left the hotel was to visit my mom on Mother’s Day,” he said. “I hadn’t seen her in a while, and it was a short visit. But that’s about it for getting out. We’re here to do a job, and that’s what I’m concentrating on.”

Eakin expects the Jets to play with desperation Friday.

“Every game has been a battle,” he said. “There’s a lot of pressure on both teams. We saw what they did in the third period (Wednesday), and we expect more of the same (Friday). We have to do a better job of handling that push, and I think we’ve shown the ability to do so.”