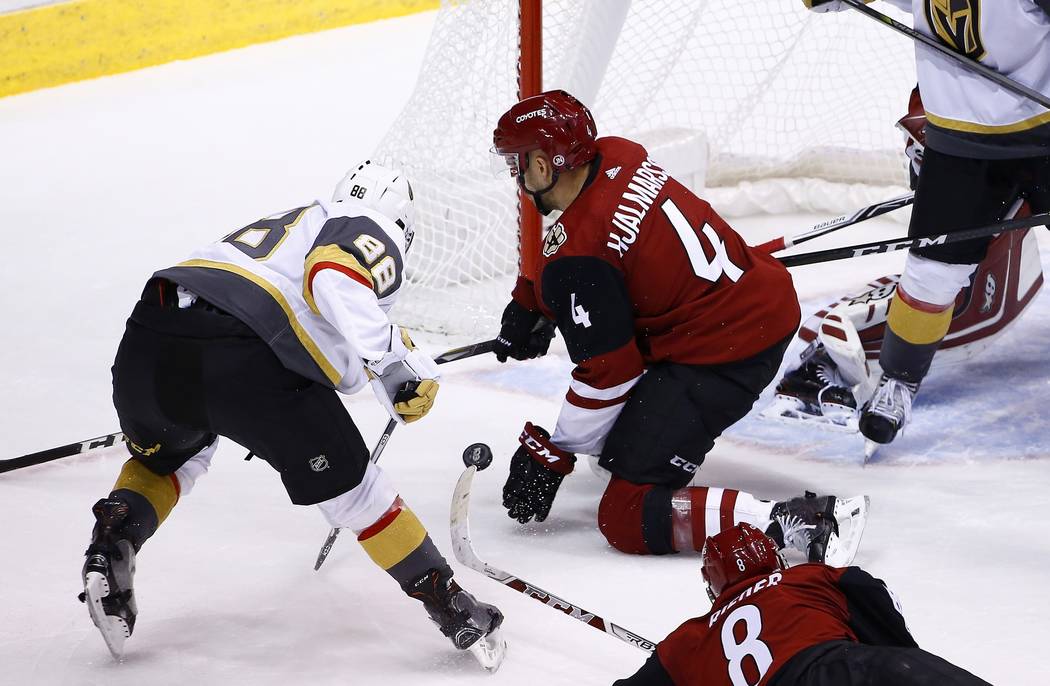 It’s an extremely small sample size — just two games. But the Golden Knights appear to have forged their identity on the ice.

The Knights are 2-0 because they have gotten great goaltending from Marc-Andre Fleury and the offense has found a way to eke out goals, namely off the stick of forward James Neal, at the most opportune times.

But it’s more than Fleury’s play and Neal’s three goals in two games, including both game-winners. It’s about a team that is not flinching at the first sign of trouble. It’s a resilient group, one that plays for each other and has experience up and down the lineup to stay with the plan, even when it’s the third period and time becomes a critical factor.

“Our team is learning our identity,” defenseman Nate Schmidt said. “And our identity is the goalie has to play well, the D has to get pucks out. Our forwards have skill. We just have to create our chances.

“Look at the goals we’ve scored: off a shin pad, off a rebound. Those are the goals you have to score in this league if you’re going to win. You’re not going to pick goalies apart from far out.”

The fast start has made the Knights the talk of the hockey world. Few, if any, were expecting to see the team in first place in the Pacific Division after the NHL’s first weekend.

As the team came home from Arizona late Saturday after the 2-1 overtime win over the Coyotes, it may have changed the mood for Tuesday’s home opener at T-Mobile Arena. What was originally going to be a celebration of Las Vegas christening its first major league professional sports franchise regardless of how the team started on the road, had turned somber with the events of last Sunday’s mass shooting on the Las Vegas Strip.

That sadness remains as the team will pay tribute prior to the game to the 58 victims and the more than 400 wounded as well as honoring the first responders and other law enforcement, fire and medical personnel. However, the team’s 2-0 record has buoyed the spirits of the fans who were hoping for a good start and got the best possible beginning.

“It’s hard to win on the road, especially playing back-to-back games,” head coach Gerard Gallant said after Saturday’s win. “That’s a big four points. I know it’s early, but the guys are working hard, helping each other and as a coach you can’t ask for much more.”

The Knights have a great opportunity to build on their early season momentum. The next seven games are at T-Mobile Arena starting Tuesday with the rematch against Coyotes. That’s 14 possible points to grab and lay down a strong foundation for the opening month.

Yes, the team went winless in three preseason games at home. But the roster was different each night. Now, the lineup is set for the most part, and do not look for Gallant to do much, if any juggling of his lines or his defensive pairings.

“We know we still have some work to do, and we still have to keep improving as a team, keep getting to know each other on the ice, get used to each other,” Fleury said. “It’s still a work in progress.”

But Schmidt said it’s good to forge an identity quickly.

“This is what we want to be, this is the idea of what we want in our team, to be pesky; the pesky Knights coming to town,” he said. “Just never giving up. Having that resolve to stay in the game. Our goaltender plays a great game and we have to make sure that we do whatever it takes to win.”