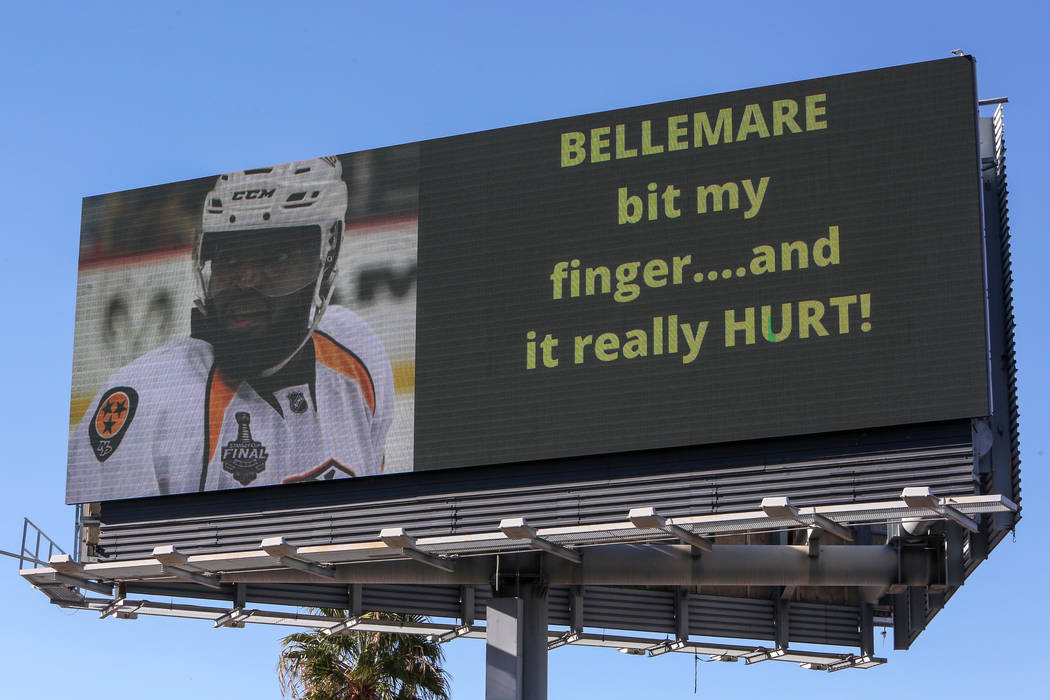 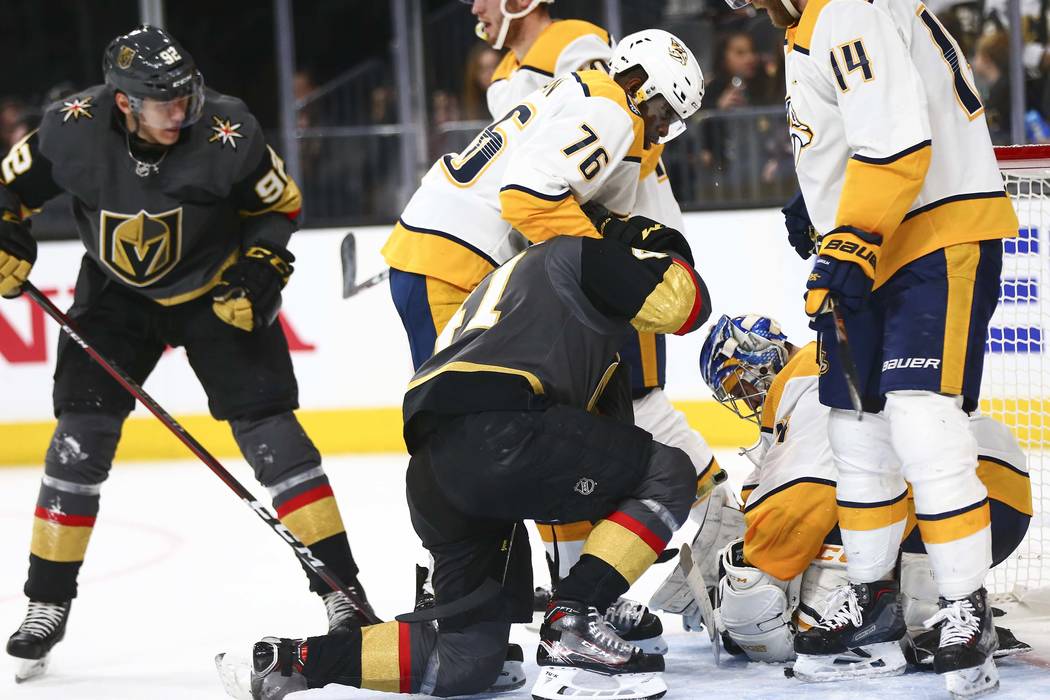 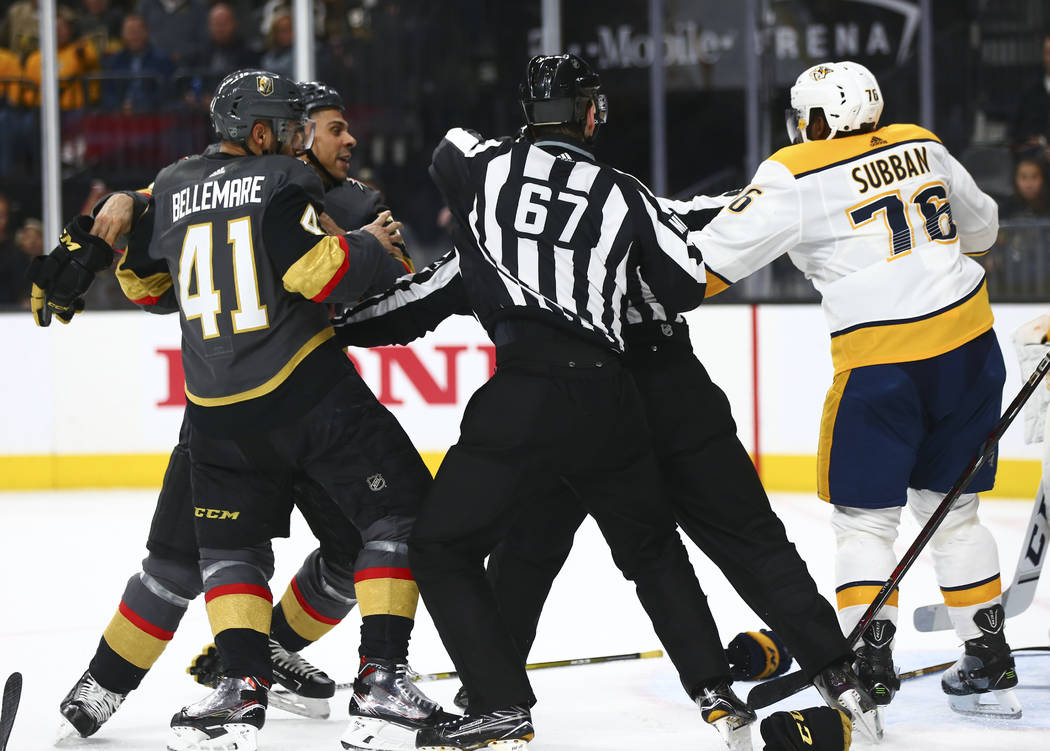 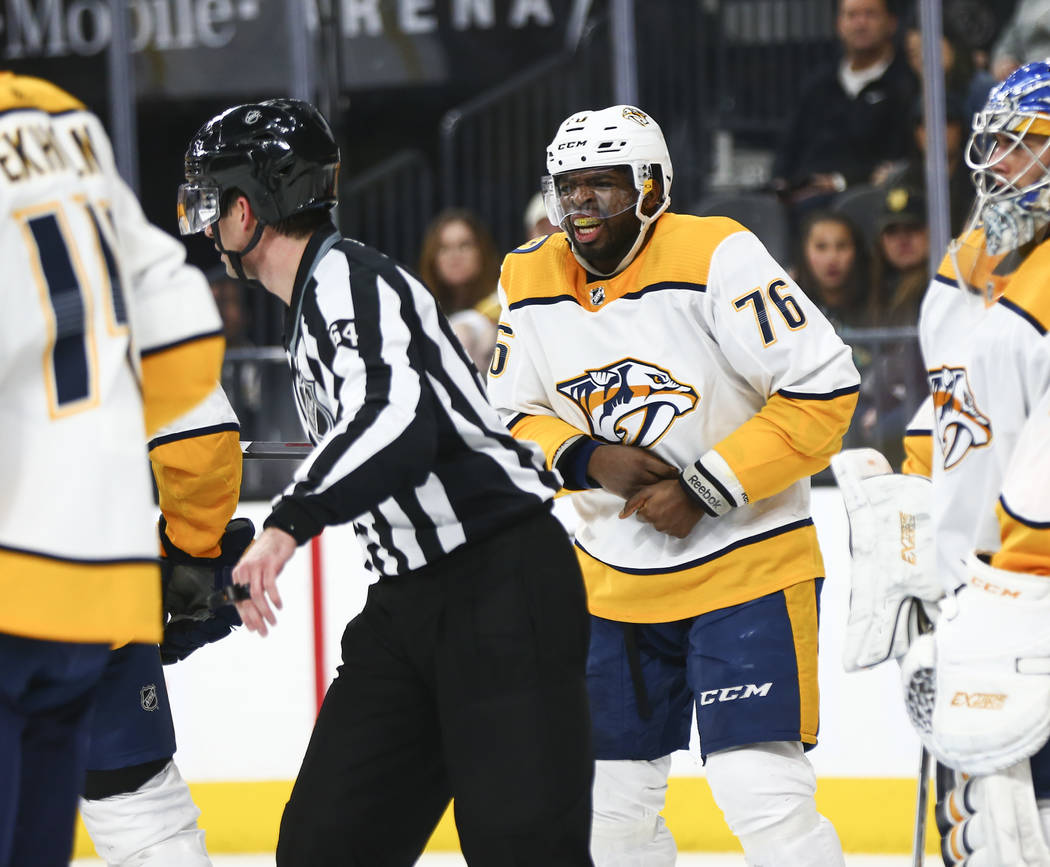 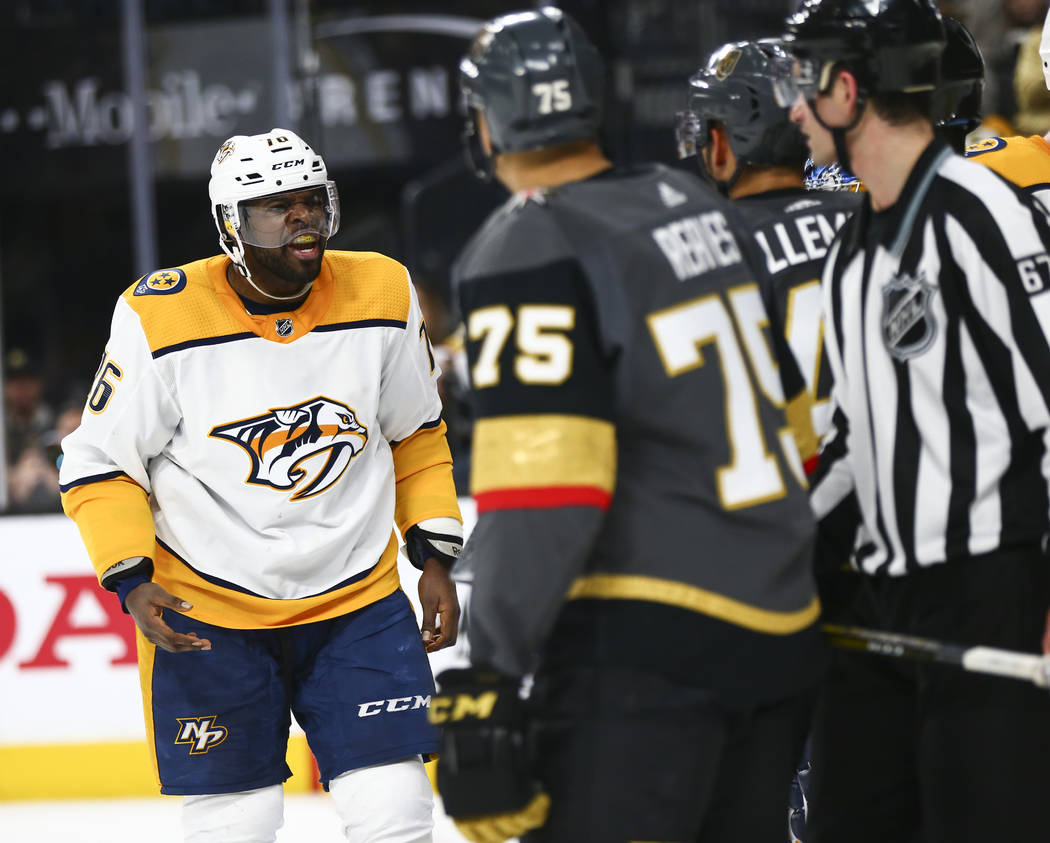 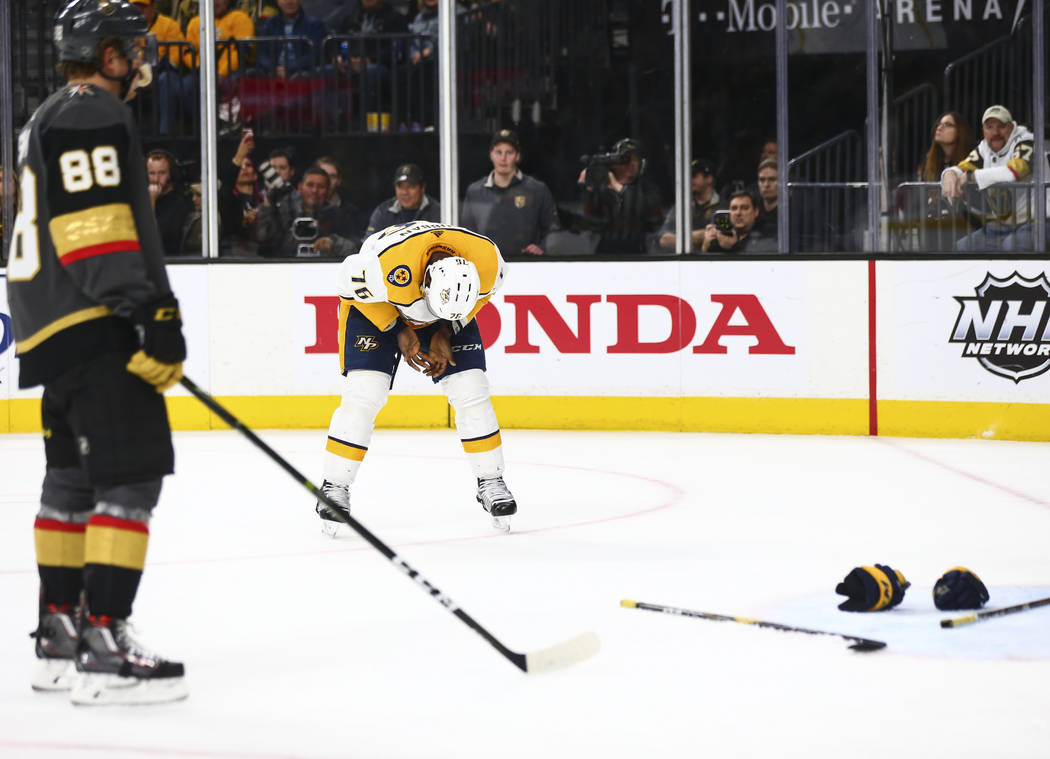 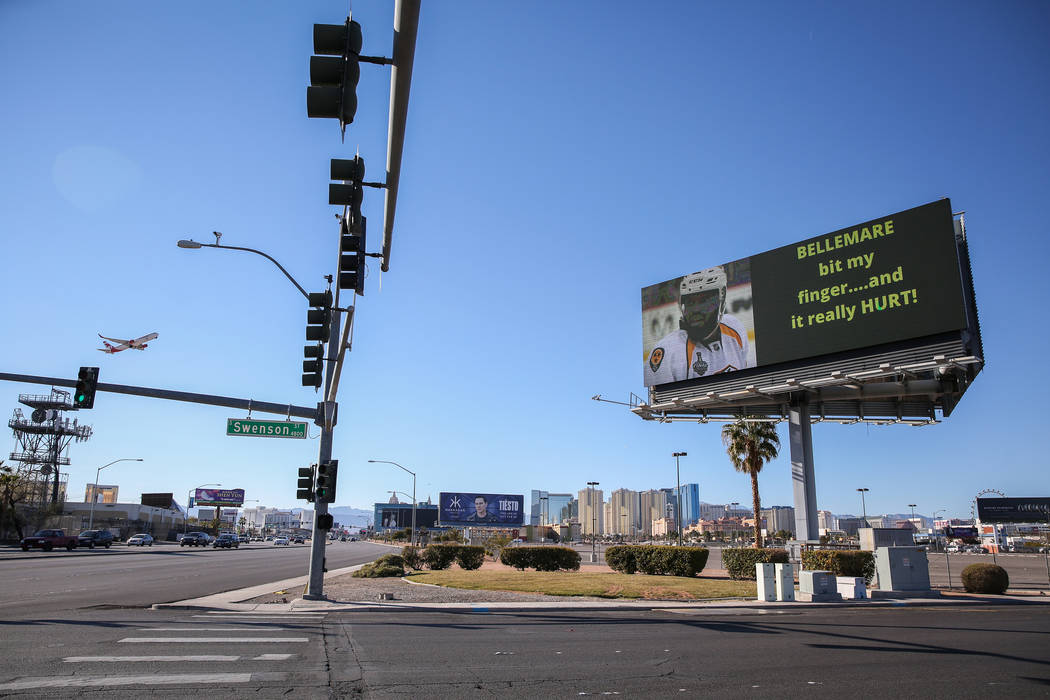 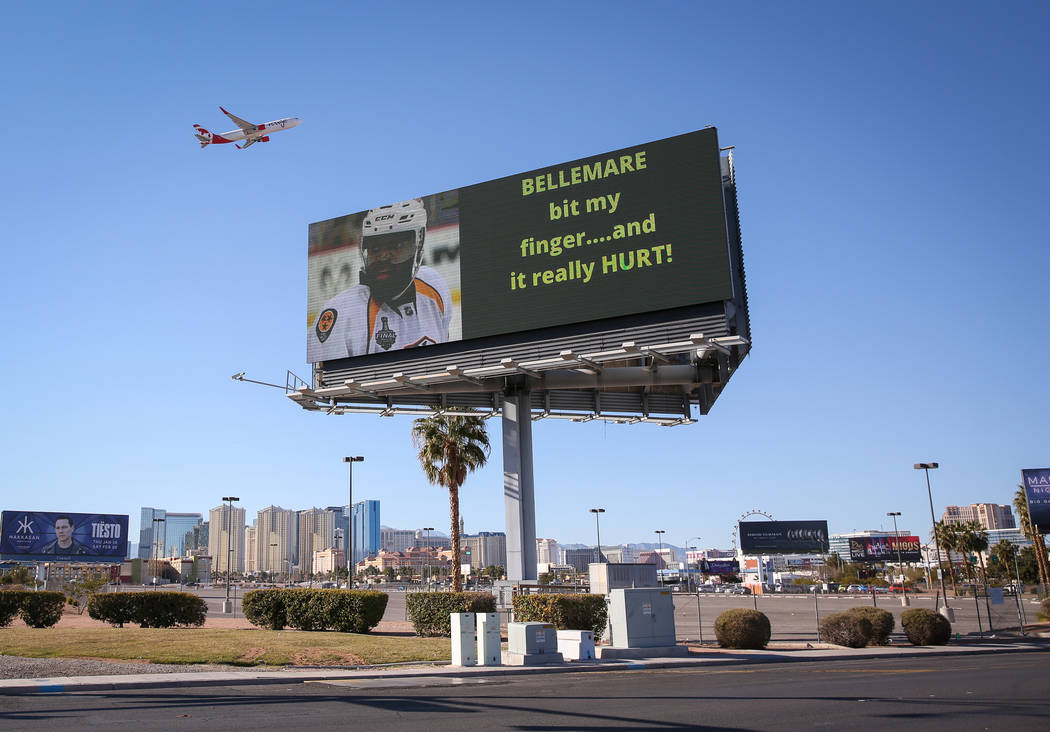 The Golden Knights game against the Nashville Predators turned into a hockey version of the viral video “Charlie bit my finger” Wednesday.

Predators defenseman P.K. Subban got tangled up with Knights center Pierre-Edouard Bellemare in front of the Nashville net with 27 seconds left in the second period and came out claiming his right hand had been bitten.

Bellemare was hunched over and Subban had his arm around Bellemare’s neck and mouth. Subban tried to pull him up, but the French forward denied biting down.

“Obviously, when he put his hand there, he removed my mouth guard and he tried to pull me up, so obviously he’s feeling teeth and he’s acting on it,” Bellemare said after the Knights’ 2-1 loss. “He started yelling ‘I bit him, I bit him.’ I mean, if you put your hand all the way in the mouth and you pull up you’re going to feel the teeth.”

Ladies and gentlemen, we might have a bite. pic.twitter.com/o2pD4kw783

The plot thickens. Did Bellemare bite, or did Subban give him the old fish hook? Bellemare appears to think it was the latter. pic.twitter.com/dRz19qlwgv

Ryan Reaves on the dustup with PK Subban late in the second period: "I don't really know what started it. I just saw (Subban) coming at (Bellemare) with his gloves off and I wasn't going to let that happen."

Tensions flared after the incident as Subban, after shaking his right hand, came back and started to talk to Bellemare. Knights forward Ryan Reaves skated at Subban to protect his teammate and was pinned to the glass by an official.

Subban and Reaves both were given unsportsmanlike conduct penalties for the incident, and Subban was also given a roughing minor.

“He bit me. My finger was bleeding,” Subban said. “All I tried to do was grab him, I grabbed him by the head to pull him up and he bit me. That’s it, I don’t know what to say. I don’t know how I walk out of there with four minutes in penalties.”

Bellemare, who appeared to have cuts on his lip after the game, said he appreciated his teammate sticking up for him. Reaves just said he wanted Subban to “stop shaking his hand.”

The viral video comparisons continued Thursday when a billboard appeared on East Tropicana Avenue and Swenson Street with a picture of Subban and the caption “BELLEMARE bit my finger….and it really HURT!,” a reference to “Charlie bit my finger.”

Subban’s real and imagined protestations aren’t helping his cause though. The NHL Department of Player Safety will issue no extra punishments for the incident, per a league spokesperson.

“For me, if it was anything other than that I probably wouldn’t have reacted the way I did,” Subban said. “When you get bit, when someone is biting your finger, I don’t know. It’s completely unexpected and it is what it is.”