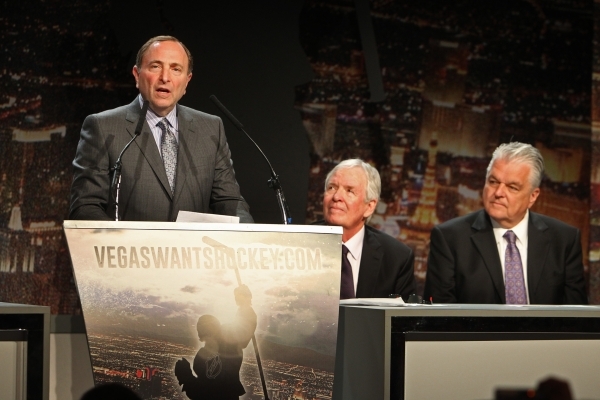 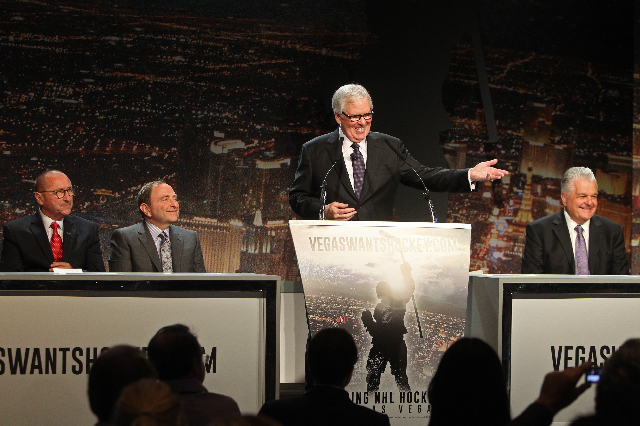 Bill Foley, the billionaire businessman who is attempting to bring major league professional sports to Las Vegas, sold his vision for an NHL franchise for the city Tuesday. He met with the NHL Board of Governors Executive Committee in New York, as did a group from Quebec City.

Foley spent about an hour in his presentation, pointing to the fact Las Vegas has secured almost 14,000 deposits on season tickets; it has a $375 million, state-of-the-art arena that is on target to be completed by mid-April and will seat 17,500 for hockey; and the city’s economy is healthy and ready to support the NHL.

“We thought it went really well,” Foley said. “There was a lot of give and take, and they wanted to know how committed we are to the NHL. We told them we’re totally committed.”

Foley said the members seemed impressed with the response from the fans with their season-ticket commitments as well as the progress on the arena, which is being built by MGM Resorts International and the Anschutz Entertainment Group. AEG owns the Los Angeles Kings and will run the arena in Las Vegas. Foley already has negotiated a lease to play in the building.

“They were very complimentary about what we’ve been able to do so far,” Foley said of the executive committee, which is chaired by Boston Bruins owner Jeremy Jacobs and includes the owners from the Minnesota Wild, Philadelphia Flyers, Washington Capitals, Calgary Flames and Toronto Maple Leafs. “I felt we were prepared and answered all of their questions. The input was great.”

NHL commissioner Gary Bettman said the committee reported to the rest of the Board of Governors after the two groups’ presentations. While no decision was made Tuesday regarding expansion, he did not know when or if a vote would be taken. It would take a three-quarters vote of the 30 teams to approve expansion, which, if it happens, would come no earlier than 2017.

“There’s no timetable,” Bettman said. “We have work to do. The committee is going to have to get together at least one more time, if not more, and we have to ultimately begin deliberations. There are a lot of issues and questions that are going to have to be answered before any decision is made.”

The league has three options: It can expand by two teams; it can expand by one team, or it can choose not to expand and remain a 30-team league. The executive committee could make its recommendation at the next meeting, scheduled for Dec. 7 and 8 in Pebble Beach, Calif.

When asked if there could be a vote on expansion before the end of the year, Bettman said: “We’re not on a timetable. We don’t have to be done by a certain point in time because ultimately this isn’t something that the board has to do.

“Anything is possible. Is it probable? I don’t know.”

While Foley is trying to bring Las Vegas its first major pro sports team, Quebec City is trying to return to the NHL after the Nordiques left for Denver in 1995 and became the Colorado Avalanche. Like Las Vegas, Quebec City has a new arena in place, though that facility is already operational. The 20,000-seat Videotron Centre hosted its first NHL game Monday, as the Montreal Canadiens played a preseason game against the Pittsburgh Penguins before a sellout crowd.

But unlike Las Vegas, Quebec City is dealing with an unstable financial situation. The value of the Canadian dollar has dropped noticeably in recent months, and the owners might have some concerns about that.

The expected cost to join the NHL as an expansion team will be about $500 million. Foley and the Quebecor group, which is driving that city’s bid, already have made deposits of $20 million and are prepared to pay the balance when asked. In Quebec City’s case, the cost could rise to $631 million to join given the current value of the Canadian dollar.

The Quebecor group is led by former Canadian Prime Minister Brian Mulroney, who said it can handle the exchange rate and it would not be a deterrent to bringing the NHL back to Quebec City. Bettman said he wasn’t overly concerned about the loonie being lowered.

“It’s the reality that we live with,” he said. “In my two decades-plus of doing this, I’ve seen the Canadian dollar lower, and I’ve seen it over par. It’s just something we deal with and the system takes account for it.”

Foley has no such issues. He would just like to get his answer sooner than later. But he knows he must remain patient and let the process run its course.

“I feel we continue to make good progress,” Foley said. “We’ve done everything the league has asked us to do. We’ll just wait and see what’s next.”