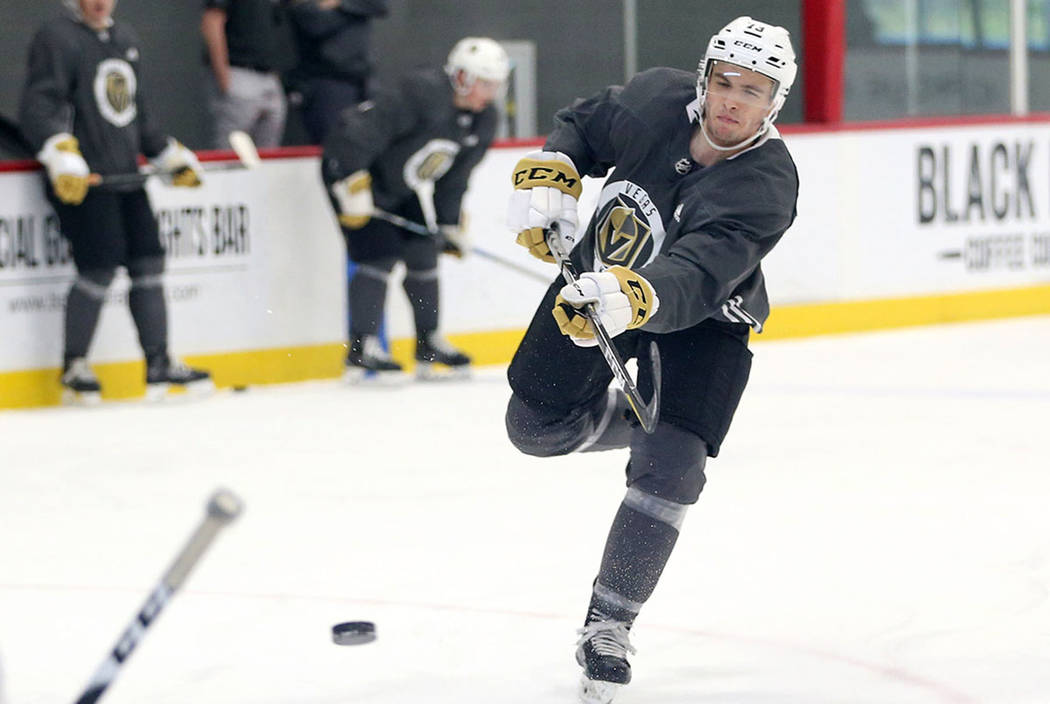 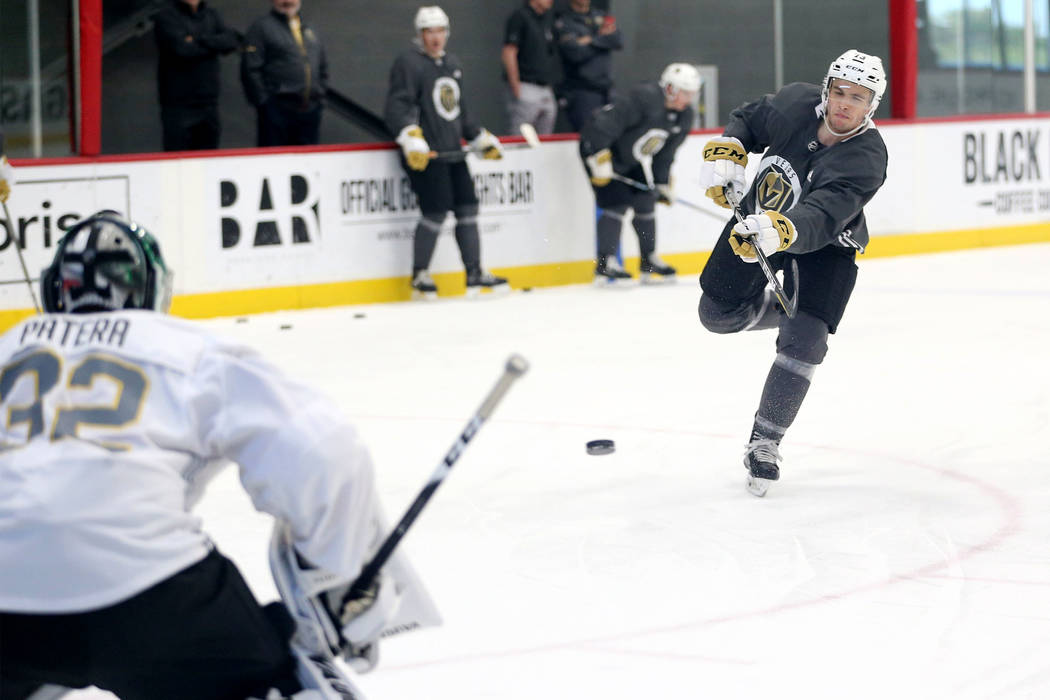 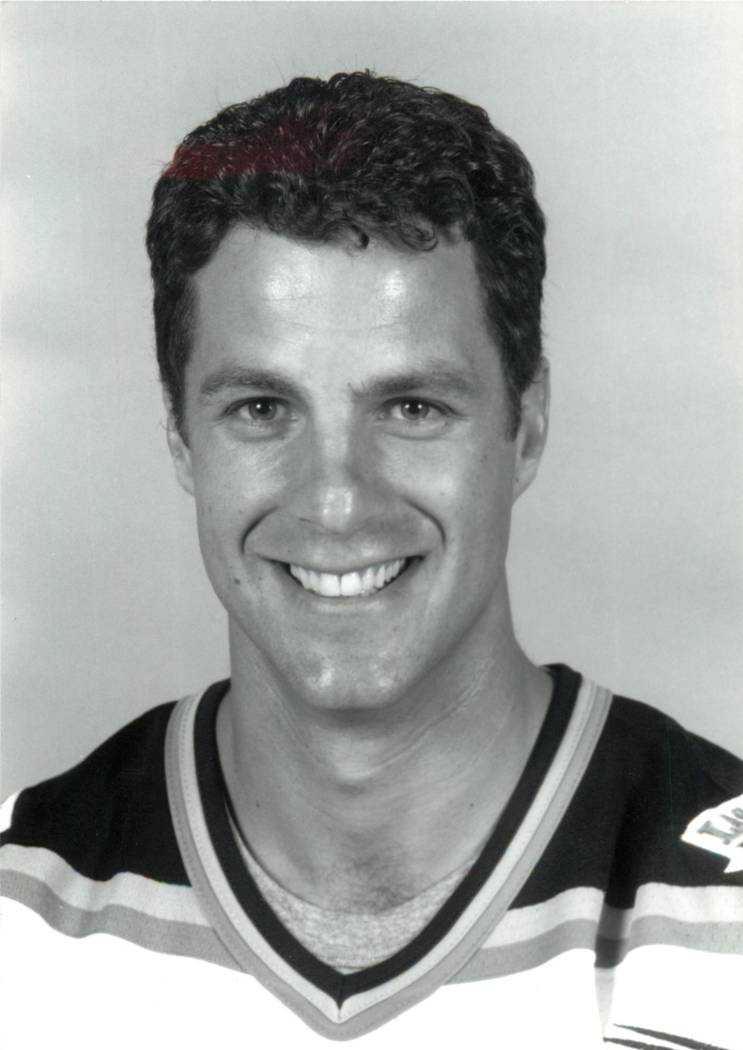 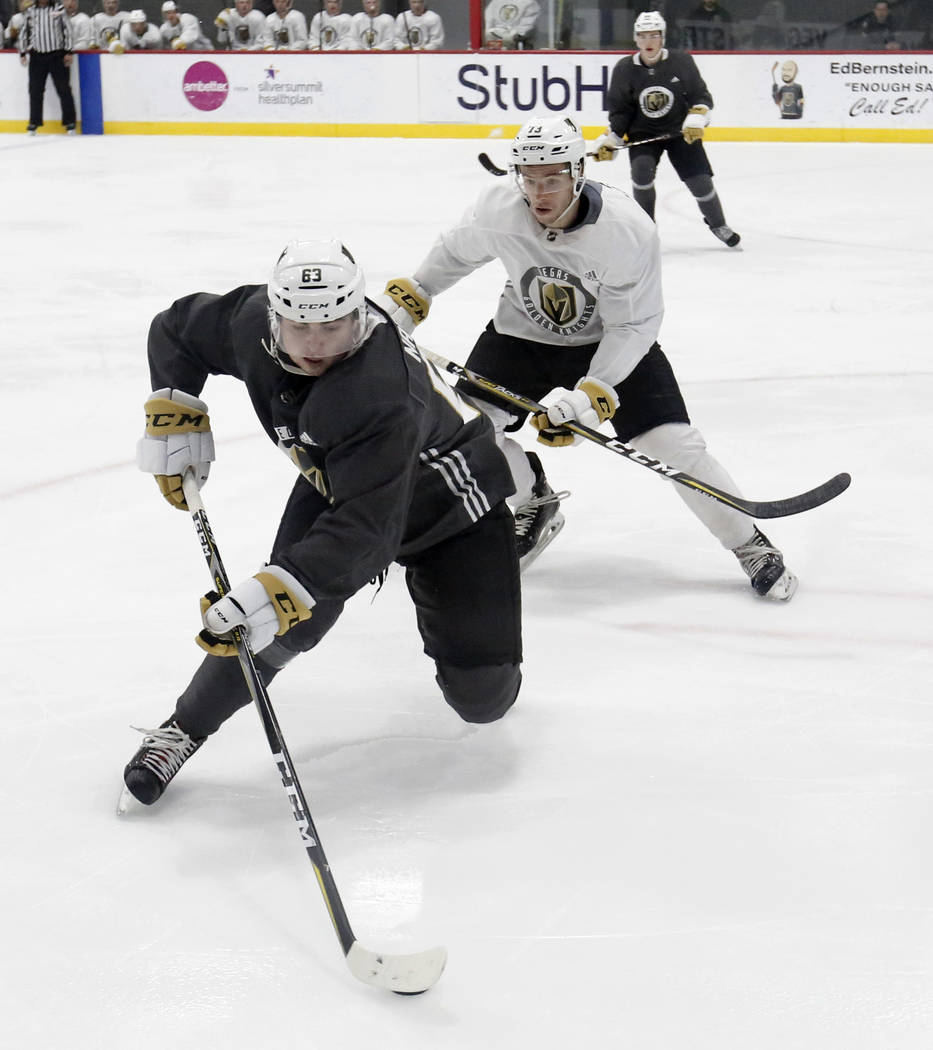 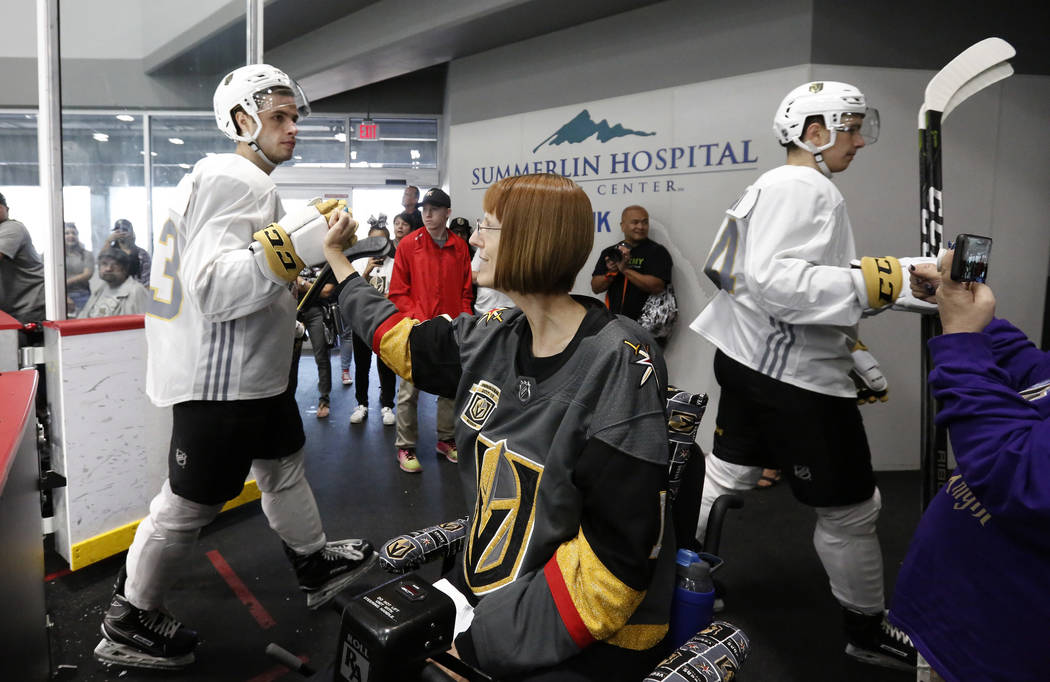 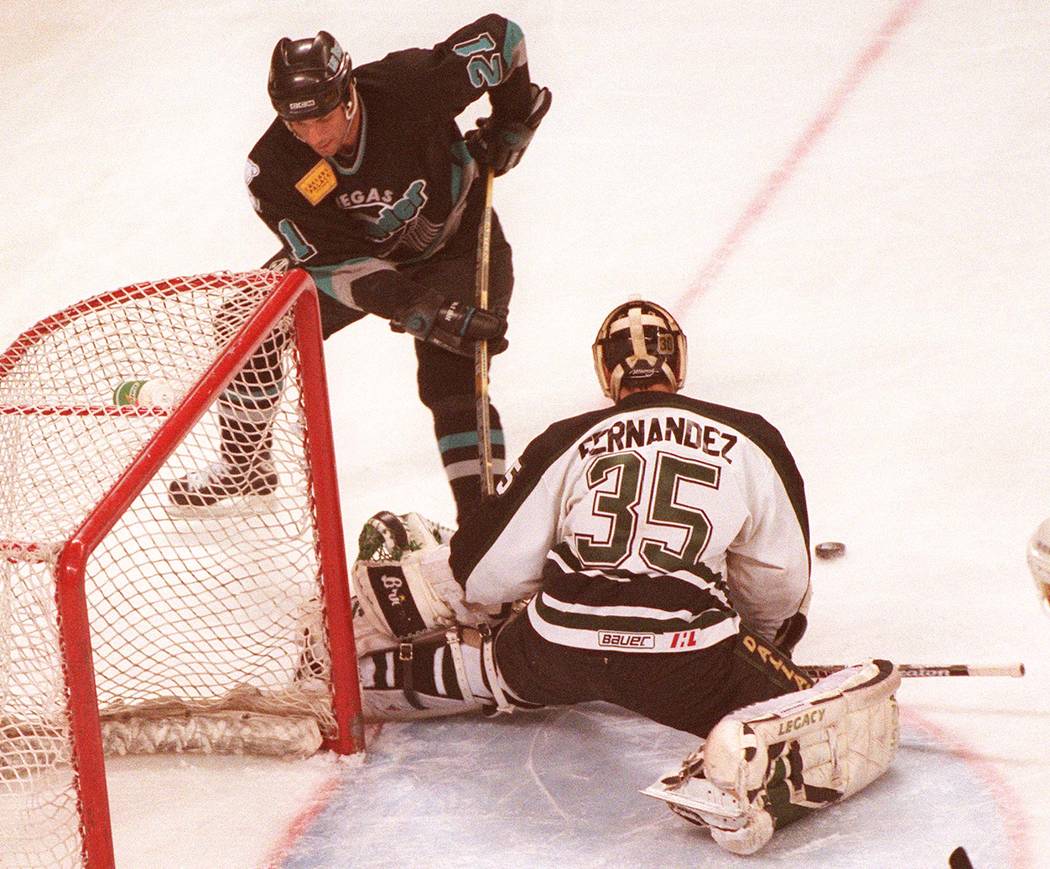 The Thunder's Ken Quinney bounces a shot off of Michigan's Emmanuel Fernandez at the Thomas & Mack Center in Las Vegas in February 1997. (Las Vegas Review-Journal)

Ken Quinney once was a hockey star in Las Vegas. Gage Quinney hopes to follow in his father’s skates one day.

After signing a two-year, entry-level contract recently with his hometown Golden Knights, Gage Quinney spent the past week at development camp getting familiar with his new organization.

”I’ve lived away my whole life, so just to be home is that much more special,” Gage Quinney said Saturday after the final scrimmage at City National Arena. “I got to meet the management and meet everybody and learn everything. I thought it was a good camp. It was fun. It was competitive. It’s everything you want.”

Gage was born in Las Vegas in 1995 when his father, who made 59 NHL appearances with the Quebec Nordiques, played for the Thunder of the International Hockey League.

Ken had a team-best 55 goals and 108 points during the 1993-94 season and helped the Thunder to the Pacific Division title. During his five seasons with the Thunder, Ken totaled 189 goals and 413 points in 376 games.

Gage briefly attended high school in the valley before he moved in with a billet family in Arizona at age 15.He played three full seasons in the Canadian major junior Western Hockey League, and the forward produced 119 points (53 goals, 66 assists) in 182 games with Prince Albert, Kelowna and Kamloops. Quinney helped Kelowna to the WHL championship in 2014-15.

Gage spent his first pro season with Wheeling in the ECHL and finished with 44 points in 45 games.

He moved up to Wilkes-Barre/Scranton in the American Hockey League last season and notched 33 points (14 goals, 19 assists) in 57 games.

“I thought it was huge,” Gage said. “I’m really thankful I was in Wilkes-Barre at the time. I learned a lot and had great coaches, great teammates. It definitely helped me along the way.”

The 22-year-old signed with the Knights on June 1. It is a two-way contract, meaning his salary is dependent on whether he is on the NHL or AHL roster. Jason Zucker is the only player raised in Nevada to reach the NHL.

“What I’ve seen is a huge progress from junior to now in his skating,” said Bob Lowes, the Knights assistant director of player personnel. “He’s in tremendous shape, and it’s really helped his game because his skating has gone to a different level. He’s always had the hands and the hockey sense.”

Quinney’s stick-handling skills were evident during the three scrimmages to conclude development camp.

He is expected to play with Chicago in the American Hockey League but will try to win a roster spot with the Knights in training camp in September.

“To sign with your hometown team is a dream come true, let alone to sign an NHL contract,” Gage Quinney said. “I’m excited for what comes next.”

Glass, the No. 6 overall pick last summer, recorded a hat trick. Dugan, a fifth-round pick headed to Providence, finished with a goal and four assists.

“Jack has some things that you can’t teach,” said Wil Nichol, the Knights director of player development. “And what I like is that he has become a better 200-foot player. Like a lot of kids this age, he still needs to work on some areas, but I saw a lot of progress with him with that.”

Keegan Kolesar and Dylan Coghlan each finished with a goal and two assists for Team White. Erik Brannstrom had two points, including a third-period goal when he beat a defender wide and picked the top corner.

“I thought he really did a nice job here,” Nichol said of Kruse. “And the (Paul) Cotter kid really popped for me. I thought he had a really nice camp. … My eye was drawn to them quite a bit.”