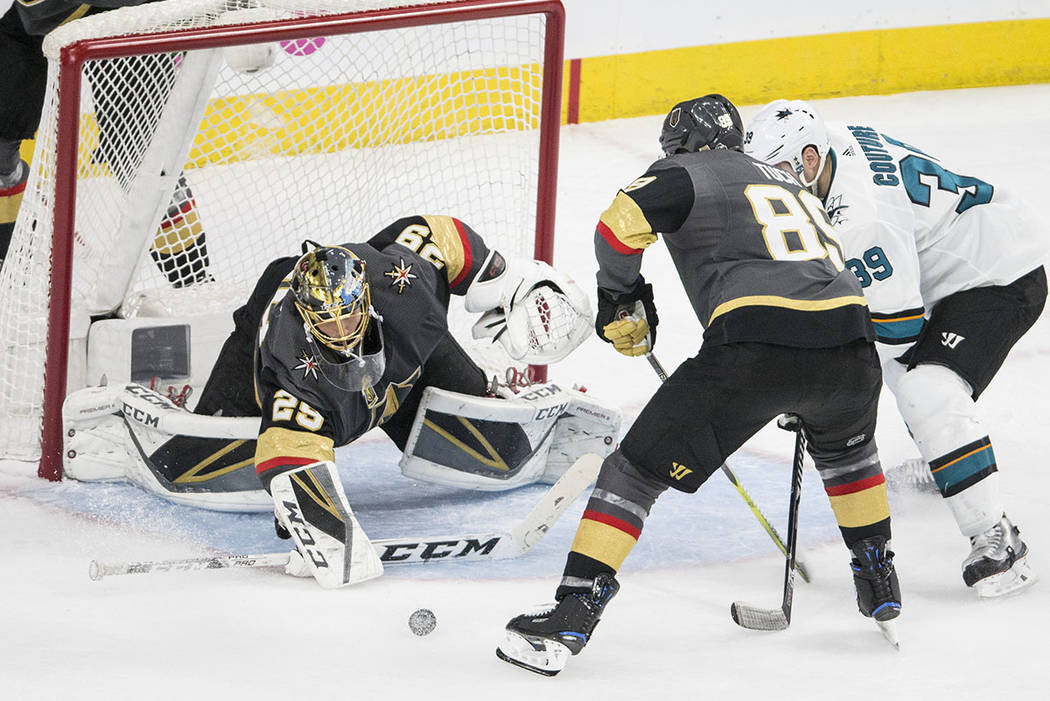 SAN JOSE, Calif. — Gerard Gallant has been known to shake things up on the Golden Knights’ bench.

Saturday, with his team trailing the San Jose Sharks 3-2, Gallant shuffled his lines, moving David Perron back with regular linemates Erik Haula and James Neal while dropping Alex Tuch down to play with Cody Eakin and Ryan Carpenter.

Perron had been on the third line since Game 3 of the opening-round series against Los Angeles after he returned to the lineup following an upper-body injury late last month.

The move paid off as Haula’s line helped set up Nate Schmidt’s tying goal in the third period while Tuch brought some renewed energy to Eakin’s line. Ultimately, the Knights came up short as they fell 4-3 to the Sharks in the second overtime.

With the series shifting to San Jose for Game 3 on Monday, will Gallant stick with the way the lines finished Game 2? Or will he move Tuch back with Haula and return Perron to Eakin’s line?

“We’ll see,” he said Sunday before the team’s departure for San Jose. “We’ll decide (Monday). But I thought both lines played well together after we switched it up.”

Haula said having played with Perron most of the year made the transition easy, though he was quick to praise Tuch’s performance.

“Alex did a great job,” Haula said. “I think it’s things in a game that happen. Obviously we know (Perron). But I don’t look at the lineup as it is. I just go out and play with whoever is with me and (Neal).”

Knights center William Karlsson has carried his regular-season success against the Sharks into the playoffs.

Karlsson had a team-best six points against San Jose in the regular season (four goals and two assists) and through two games of the playoffs, he has two goals and three assists.

“I don’t know any specific reason,” Karlsson said Sunday after his two goals Saturday gave the Knights a 2-0 second-period lead. “I’ve had some chances that I’ve been able to put in. But I haven’t noticed getting any extra attention from them. I’m just trying to go out and just play my game.”

Karlsson, who led the Knights in scoring during the regular season with 43 goals and 78 points, is tied for the team lead in playoff scoring with Reilly Smith. Both have seven points.

The Knights will hold official watch parties for Game 3 Monday and Game 4 on Wednesday.

The D Las Vegas will be the site for Monday with a 72-foot screen and stadium sound. Wednesday’s viewing party is at Toshiba Plaza and fans are encouraged to bring lawn chairs and blankets to watch the game on the large mesh screen outside T-Mobile Arena. Both games begin at 7 p.m.

Admission to both events are free.