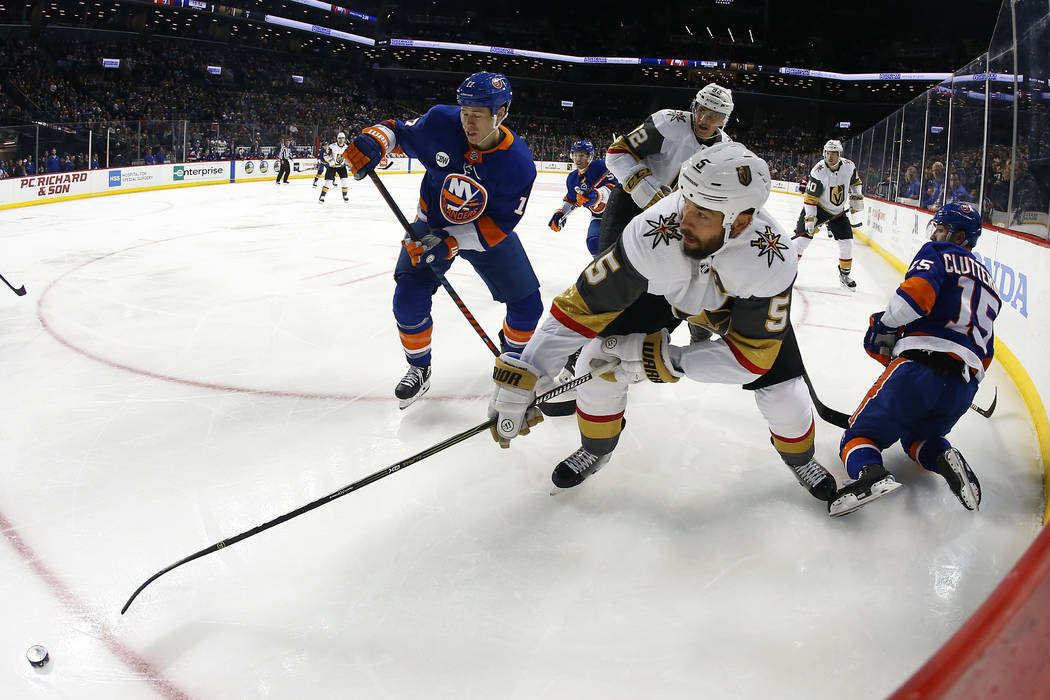 The Golden Knights open a four-game homestand Thursday against the New York Islanders at T-Mobile Arena.

Opening faceoff is 7 p.m., and the game will be televised on AT&T SportsNet Rocky Mountain.

“I think they’re playing a good, sound game,” coach Gerard Gallant said of the Islanders. “That team compared to what they were last year, they’re playing a different game. They’ve got a new coach in (Barry Trotz) and they play a more defensive game. They block a lot of shots.”

Winger Brandon Pirri is expected to make his season debut for the Knights (19-15-2, 40 points) after being recalled from Chicago of the American Hockey League on Wednesday.

Max Pacioretty was placed on injured reserve with an undisclosed injury and will miss a minimum of one week, according to the team. The left wing was hurt during the second period of Monday’s 1-0 loss at Columbus when he collided with the Blue Jackets’ Oliver Bjorkstrand.

He was with the Knights late last season and netted three goals in two games, including two goals in the Knights’ 5-4 shootout victory at Vancouver on April 3.

“I’m a shoot-first player,” Pirri said. “Getting the opportunity to play in a top-six role, I really want to make the most of it. Not a lot of call-ups get a chance like this so for me, it’s about making the most of it.”

Defenseman Colin Miller will not play due to an undisclosed injury and is expected to be replaced by Brad Hunt.

Miller is one of two players, along with center William Karlsson, to never miss a game for the Knights (118 games).

The Knights are 10-3-1 at home and have won five straight at T-Mobile Arena.

The Knights defeated the Islanders 3-2 on Dec. 12 in a game that is better remembered for a 16-minute delay before the start of the third period after a bank of lights over the ice at Barclays Center in Brooklyn failed to turn on.

New York (17-12-4, 38 points) is third in the Metropolitan Division and won three straight since its loss to the Knights.

The Islanders beat Arizona 3-1 on Tuesday in the second game of a road back-to-back.

Josh Bailey and Mathew Barzal lead the Islanders in scoring with 27 points.

Defenseman Luca Sbisa, who played 30 games for the Knights in their inaugural season, is expected to play for New York.

“It’s nice after being on the road for such a long time, to come home and play a bunch in a row and try to keep climbing in the standings a little bit,” Knights forward Oscar Lindberg said.