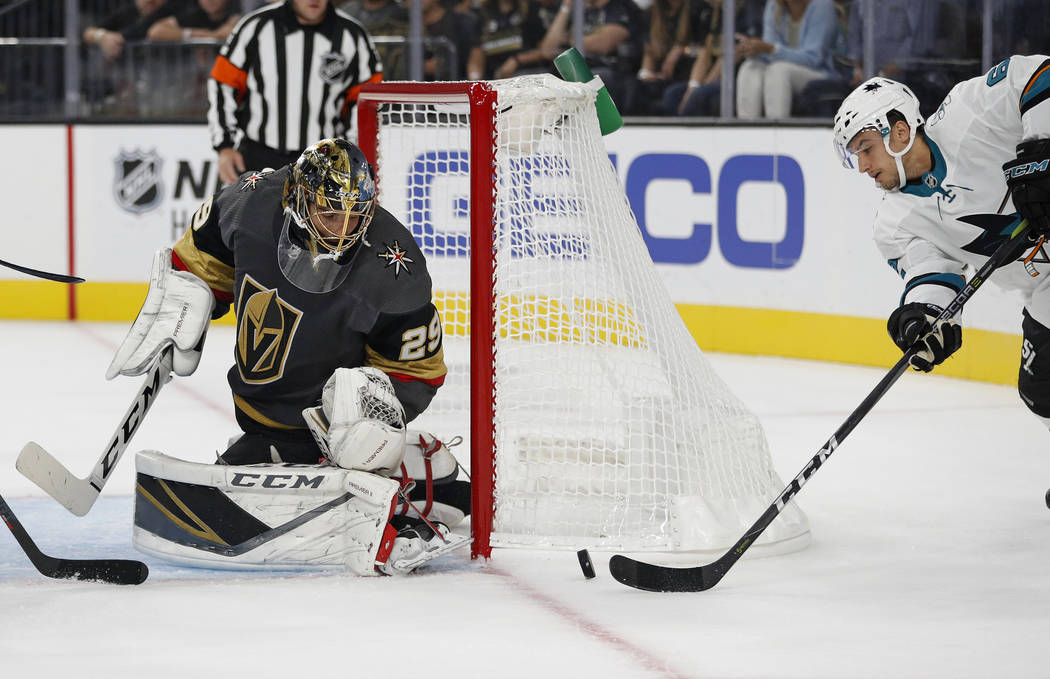 The Golden Knights look for their third consecutive victory when they meet the Pacific Division-leading San Jose Sharks on Saturday at T-Mobile Arena.

Opening faceoff is 7 p.m., and the game will be televised on AT&T SportsNet Rocky Mountain.

Goaltender Marc-Andre Fleury will make a rare start in the second game of a back-to-back against the Sharks, coach Gerard Gallant announced after morning skate.

Fleury blanked Calgary on 29 shots Friday in a 2-0 victory for his league-high fourth shutout.

The only time Fleury played on back-to-back days last season was Oct. 6 and 7, 2017, the opening two games in franchise history.

“He played real well last night. He feels good today and everything’s great,” Gallant said. “No travel involved, so it’s an easy back-to-back. An afternoon game and a night game. He gets lots of time to rest.

“We don’t like when we have to travel and you have to play guys back-to-back. It happens sometimes. We think it’s a good situation for him to go back-to-back, especially the way he played.”

No other lineup changes are expected after the Knights won their second straight Friday and improved to 6-3-1 at home.

The Knights won a season-high three games in a row between Oct. 13 and Oct. 20.

“I think we just try and carry our momentum that we’ve had our last couple games and make sure we’re focused on skating,” defenseman Nick Holden said. “When our team is skating, we’re a very effective team. We’ll just make sure we’re doing that again tonight.”

San Jose (12-7-4, 28 points) leads the Pacific Division by one point after silencing Vancouver 4-0 on Friday. Aaron Dell made 19 saves for his second straight shutout.

Martin Jones was announced as Saturday’s starter as the Sharks’ open a five-game road trip.

San Jose owns the No. 2 penalty kill in the league at 89.7 percent and rank third in fewest shots allowed at 28.3 per game. The Knights are No. 1 in shots allowed per game at 26.9.