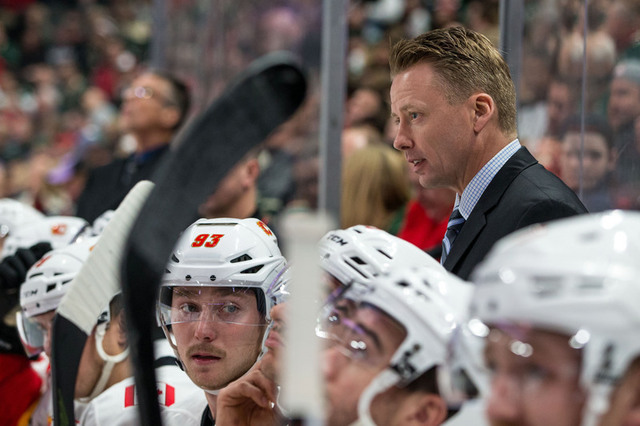 CALGARY, Alberta — The hockey gods have not smiled on Glen Gulutzan. And the first-year coach of the Calgary Flames has no idea why.

The Flames (7-10-1) have been slow to respond to his style of play. Scoring has been a chore, as his top goal producers have yet to get going.

On Tuesday, one of the team’s stars, Johnny Gaudreau, broke a finger after being continuously slashed in the Flames’ 1-0 win over Minnesota and is expected to miss six to eight weeks.

And as easy as it would be for Gulutzan to show frustration, he’s doing his best to hold it together. The season is only a quarter of the way through. There’s time for the Flames to turn things around, although with each passing week they don’t make progress, the job becomes that much more difficult.

“We’re not the first team or the last to lose a star player,” he said. “We have to find a way to make up the difference.”

The fans aren’t so forgiving. Some of them are calling for general manager Brad Treliving to make a change on the bench. But given Treliving hired Gulutzan in June, that’s probably not happening anytime soon.

“I know there’s a lot of craziness out there, but I don’t pay attention to it,” Gulutzan said before Calgary’s 2-1 overtime victory over the Arizona Coyotes on Wednesday at the Scotiabank Saddledome. “I’m handling it pretty good.”

Gulutzan, 45, wants his team to be more responsible in its own end, and he thinks that can generate the Flames’ stagnant offense.

“When you play better defense, you get more opportunities on offense,” he said. “It’s as simple as that.”

Gulutzan’s relationship with the Flames’ organization goes back to his days when he was general manager and coach of the Las Vegas Wranglers of the ECHL. Las Vegas was Calgary’s affiliate.

“It gave me a lot of experience, and it gave me my chance,” Gulutzan said of his six years in Las Vegas from 2003 to 2009. “It also taught me about working long hours. When you’re both the coach and the GM, you have a lot of responsibilities. You do everything.

“I remember when we bought our first skate sharpener, and we didn’t have a table to put it on. Or we needed a piece of tape to hold something together. You were literally building from the ground up. There’s always an affinity toward it. You feel like it’s you, and you’re in the fabric of it. From immigration to players to the promotions and all that stuff, it was fun to be a part of.”

Gulutzan remembers the annual “Midnight Game” the Wranglers used to play as one of the better promotions in the league, even though he admits he wasn’t initially on board with the idea.

“I wasn’t sure it would work,” he said. “But we tried it. It caught on, and it became a regular part of our schedule. The fans seemed to enjoy it, and it worked out well.”

Gulutzan’s best season with the Wranglers was in 2008 when Las Vegas won the Western Conference and reached the Kelly Cup finals only to lose to Cincinnati in six games. It showed he had the ability to coach, and it led him to Texas of the American Hockey League in 2009 and eventually to his first NHL stop with the Dallas Stars in 2010.

“We had some very good players who played for each other and worked hard every day,” Gulutzan said. “They were a great group of guys, and I was very proud of what we accomplished.”

After two years of winning hockey (64-57-9) but missing the playoffs both seasons, Dallas fired Gulutzan. He was quickly picked up by Vancouver as an assistant and spent three years with the Canucks before the Flames hired him.

“You try to learn everywhere you go,” Gulutzan said. “I think I’ve learned how to handle people better since I began coaching, and I have a better feel for what to do in certain situations. That comes with experience and being patient.”

Gulutzan is among the many around the NHL who are excited to see the league in Las Vegas.

“It’s going to be great,” he said. “I have a lot of respect for what Mr. (Bill) Foley has done to bring the sport back to Las Vegas. It’s a great place, and I think the city is going to support the NHL.

“I still have my place in Vegas. Two of my kids were born there. I still have friends there. It will always be a special part of my life.”