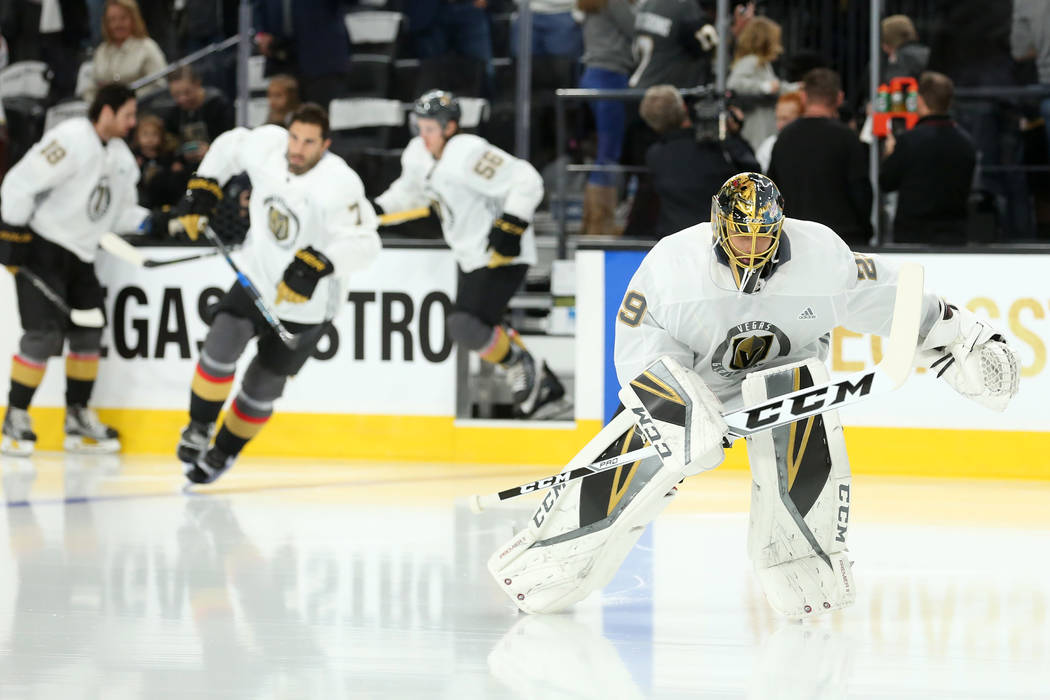 The Golden Knights finally received some good news regarding their goaltenders.

Marc-Andre Fleury skated Wednesday at City National Arena for the first time since his concussion Oct. 13 in a game against Detroit, an indication the team’s No. 1 netminder is close to returning to the lineup.

The Knights had the day off Wednesday and did not comment on Fleury’s status through a team spokesperson. General manager George McPhee is expected to provide an update when the team returns to practice Thursday.

Marc-Andre Fleury on the ice this morning. https://t.co/DF1yBQlm8z

Fleury, 32, was injured in a collision with Detroit’s 6-foot-5-inch, 225-pound forward Anthony Mantha during the second period. Fleury remained in the game and allowed four goals in the third period of 6-3 loss.

He was placed on the injured-reserve list the following day after showing concussion symptoms.

Last month, Fleury’s agent, Allan Walsh, blasted the NHL’s concussion spotter protocol and said, “the way the NHL is allowing players to remain in games is a joke.”

Fleury was the NHL’s second star from the opening week of the season, and he is 3-1 with a 2.48 goals-against average and a .925 save percentage.

Fleury was with the Knights at the beginning of their six-game road trip that concluded Tuesday at Montreal, but did not participate in any of the team’s practices or game-day skates.

“Once he gets on the ice, he’s probably at least four to five days away,” Knights coach Gerard Gallant said on Oct. 23.

Based on that timetable, Fleury could travel with the Knights next week when they visit Pacific Division foes Edmonton (Tuesday) and Vancouver (Nov. 16).

Malcolm Subban, who took over in goal when Fleury went down, remains on IR with a lower-body injury and is approximately a week and a half away from returning.

Subban was hurt in the third period against St. Louis on Oct. 21 and expected to miss four weeks. In three appearances, he is 2-0 with a 2.06 GAA and a .936 save percentage.

Oscar Dansk, the Knights’ No. 3 goalie, went down with a lower-body injury against the New York Islanders on Oct. 30 and was ruled out for the remainder of the road trip.

Dansk was 3-0 with a 1.78 GAA before he was hurt in Brooklyn. It is uncertain whether he will be healthy enough to play Friday.

If Fleury and Dansk are not ready, the Knights will stick with Maxime Lagace against Winnipeg.

Lagace earned his first NHL win against Ottawa on Saturday and held the Knights in games against Toronto (4-3 shootout loss) and Montreal (3-2 loss).

Backup Dylan Ferguson remains with the Knights, but the 19-year-old is expected to return to his major junior team in the Western Hockey League when Fleury or Dansk is activated.