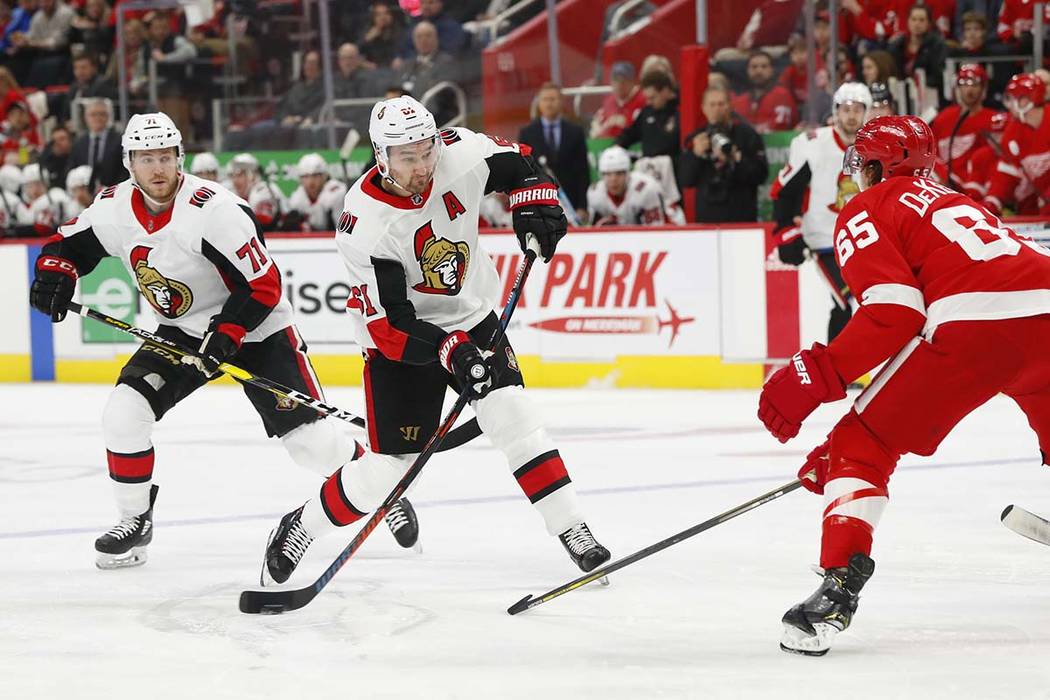 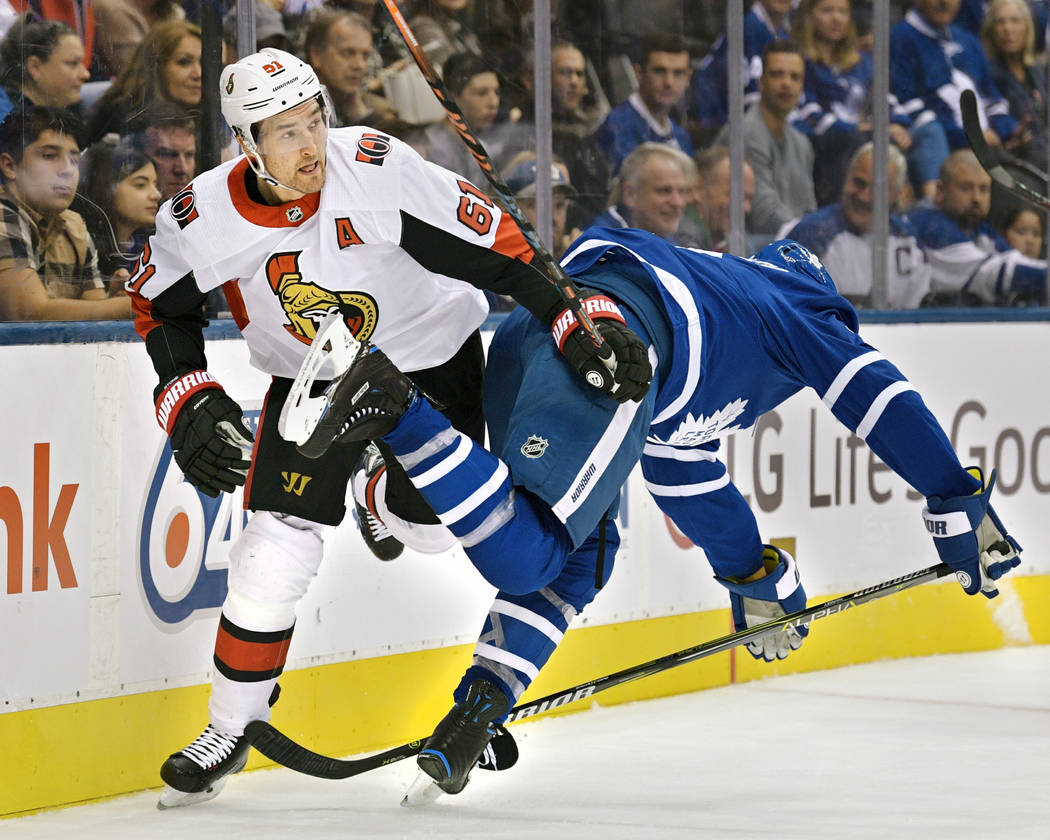 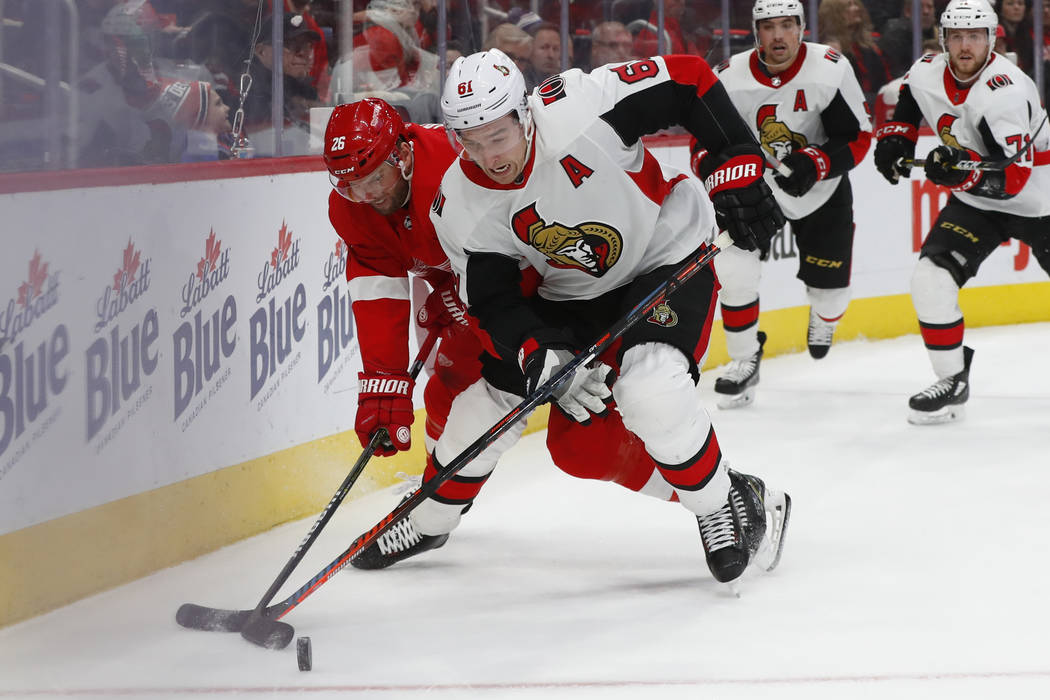 There was a sequence from early in the second period of the Golden Knights’ 5-4 loss to Ottawa on March 2 that illustrates Mark Stone’s talent.

The right wing was in proper position defensively after the Knights nearly created a turnover in the Senators’ zone, settled a pass from then-teammate Erik Karlsson and whistled a 120-foot stretch pass that led to Bobby Ryan’s breakaway goal.

“This type of player doesn’t come available often,” Knights general manager George McPhee said. “We believe he’s one of the best all-around players in the NHL and helps to make our team better.”

Stone, widely regarded as the top available player on the market, was acquired by the the Knights in a blockbuster deal that went through less than 20 minutes before Monday’s trade deadline.

Stone’s agent, Craig Oster, confirmed that his client was en route to Las Vegas on Monday night, though it’s uncertain whether he will make his debut Tuesday when the Knights host Dallas at 7 p.m. at T-Mobile Arena. He is scheduled for a news conference Tuesday following the Knights’ early skate, which begins at 10:30 a.m. and typically lasts a half hour.

“We knew he was going to be available at the deadline,” McPhee said. “We checked in five days ago and the prices did not make sense to us at that time. There were a lot of rumors that we were big-game hunting. We weren’t at those prices.

“There wasn’t a lot of dialogue the last four or five days, but today we got going again, and it got to a point where it made sense to us.”

Stone, 26, is set to be an unrestricted free agent this summer and announced on TSN he agreed to a contract extension with the Knights. McPhee confirmed the deal was not finalized, but it is believed to be for eight years with a $9.5 million average annual salary and include a full no-movement clause.

Stone can’t sign an extension until March 1 due to salary cap restrictions. He will become the team’s highest-paid player by average annual salary next season, ahead of goaltender Marc-Andre Fleury ($7 million) and left wing Max Pacioretty ($7 million).

Excited to be Knight

“Mark is very excited about joining the Golden Knights,” Oster said. “He was really happy to hear about their interest and pleased to authorize us to begin discussions on a new contract, which we hope will be finalized soon.”

Including Stone, the Knights have $77.125 million in salary committed to 18 players for 2019-2020, putting them slightly less than $6 million under the projected $83 million salary cap.

That cap space increases when accounting for the $5.25 million attached to David Clarkson (long-term injured reserve).

McPhee insisted Stone’s deal will not hamper the team from trying to sign restricted free agent William Karlsson to a long-term contract.

“We’ll have flexibility to do things,” McPhee said. “I’m not interested in being hamstrung on anything, and we won’t be.”

The Knights have lost 10 of their past 13 games and fell out of the race for the Pacific Division title, but McPhee said that did not factor into the move.

Stone should improve an offense that ranks 19th in the league in scoring at 2.90 goals per game. He becomes the Knights’ leading scorer after producing a career-high 28 goals and 34 assists for 62 points in 58 games.

“Hopefully, it gives us a boost,” right wing Reilly Smith said. “We haven’t been playing our best hockey as of late. He’s a talented player who works hard, so he should be a good addition to our team.”

‘Best stick in the league’

Coach Gerard Gallant said he expects Stone to play in all situations The 6-foot-4-inch, 216-pounder is known as a reliable defender and strong locker room presence.

He was the alternate captain for the Senators and leads the NHL in takeaways with 88.

The Knights are familiar with Stone from his time in the major-junior Western Hockey League with the Brandon Wheat Kings, who are owned by Knights assistant general manager Kelly McCrimmon.

A former sixth-round pick, Stone has five straight 20-goal seasons and surpassed 60 points for the fourth time in the past five years.

“He’s a guy, seems like a give-and-go player, and those guys often like to play fast,” Pacioretty said. “He has probably the best stick in the league in terms of takeaways and batting pucks and turnovers and creating them. Big part of our forecheck relies upon that, and we’re always looking to create turnovers, and he’s going to definitely help in that department.”

Brannstrom, a first-round pick in the 2017 draft (No. 15 overall), is the centerpiece of the deal for the Senators.

The rookie posted seven goals and 21 assists in 41 games for the Chicago Wolves and was named to the American Hockey League All-Star Classic.

“Erik Brannstrom is the top defense prospect in the game, simply a dynamic talent who will be a major component of our future,” Ottawa general manager Pierre Dorion said. “He’ll be a cornerstone player of our rebuild.”

Oscar Lindberg, who was informed of the trade by Karlsson after practice Monday, never found a full-time role after being selected in the expansion draft.

He has four goals and 12 points in 35 games and is set to become an unrestricted free agent at the end of the season.