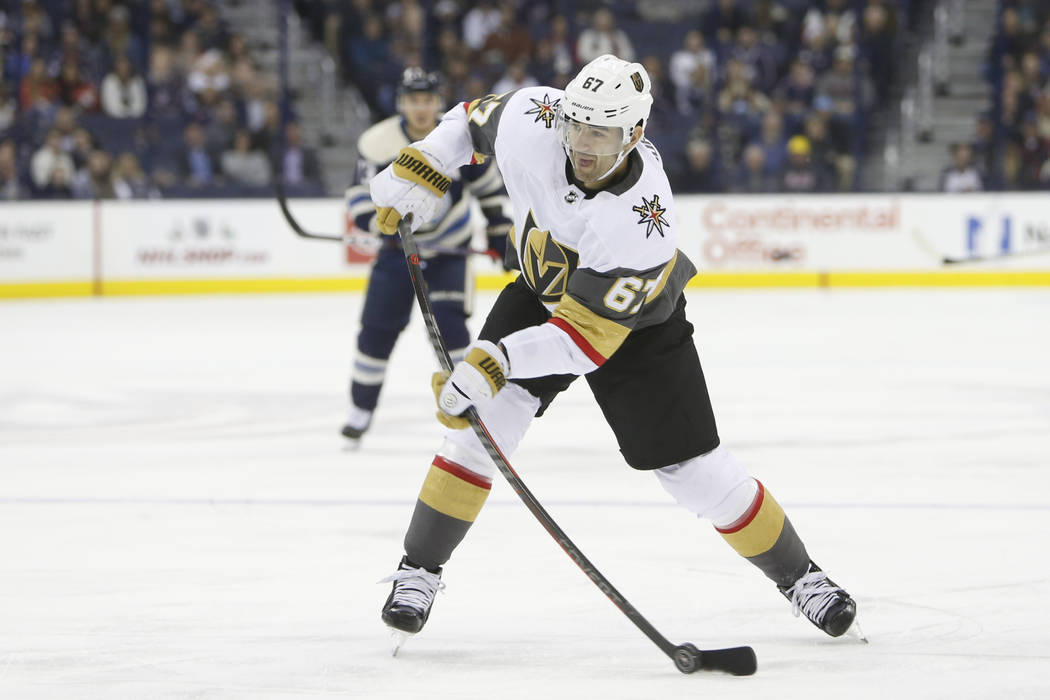 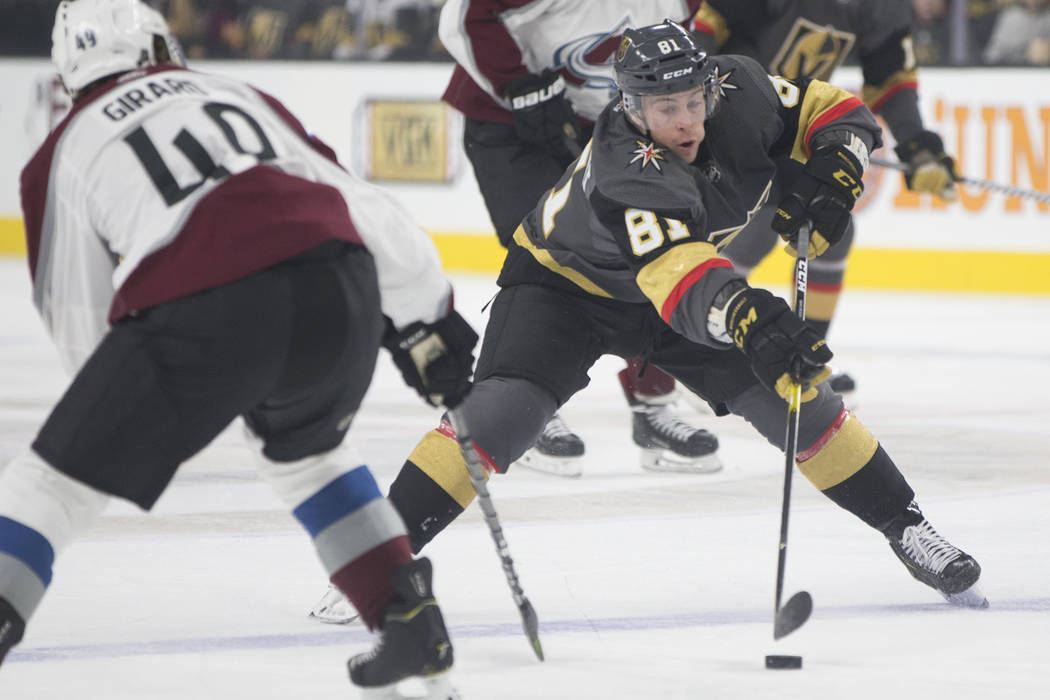 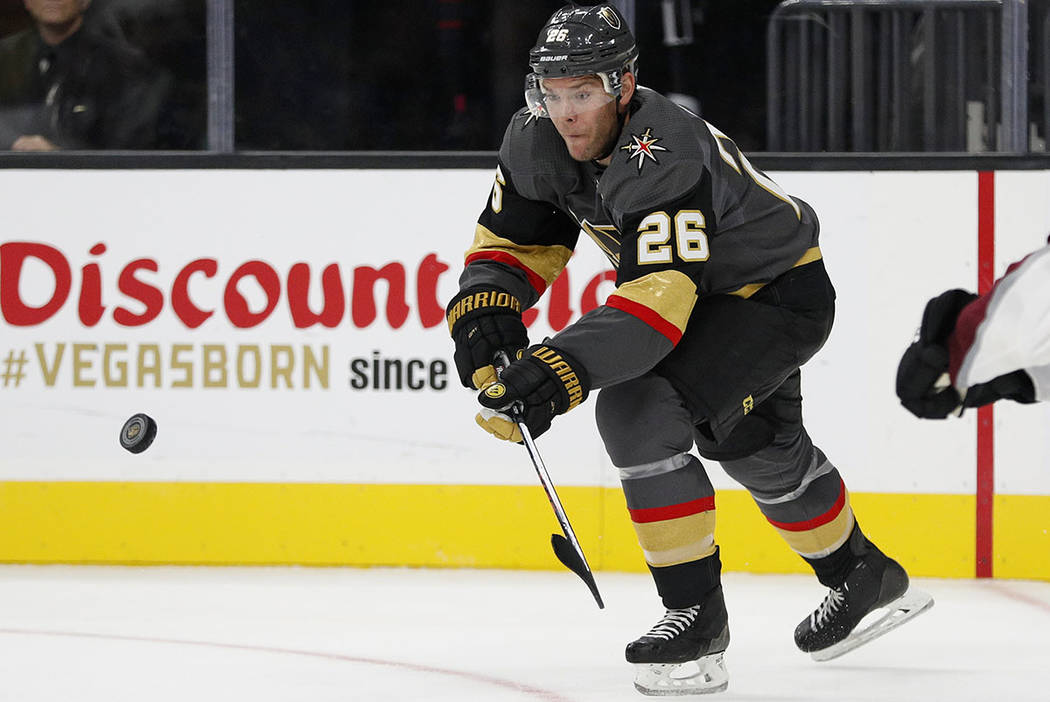 Vegas Golden Knights center Paul Stastny, seen in September, vies for the puck against the Colorado Avalanche during the third period of a preseason NHL hockey game in Las Vegas. (AP Photo/John Locher)

If it seems like the Golden Knights have hit more pipes than a busy plumber in recent weeks, that’s because they have.

Jonathan Marchessault was the latest to see a shot clank off the goal post early in the first period of the Knights’ 4-1 loss to the Winnipeg Jets on Tuesday at Bell MTS Place.

The Knights are tied for second in the NHL with Minnesota, having hit the post or crossbar 43 times in 49 games.

They’ve hit the post 32 times, which is tied for sixth in the league, and are second behind Vancouver with 11 shots off the crossbar.

The Canucks lead the league with 47 shots that have drawn iron.

Since Jan. 1, the Knights and Minnesota are tied for the most shots to hit the post or crossbar with nine. Their four shots off the crossbar during that stretch leads the league.

Left wing Max Pacioretty has been especially unlucky in those seven games. He hit the crossbar in the third period Saturday at Chicago — Paul Stastny put in the rebound to tie the game — and is tied with four other players for the league lead since the turn of the calendar with three shots to hit the post or crossbar.

Pacioretty and Marchessault share the team lead with six shots off the pipe.

“The amount of posts and the amount of chances I’ve missed as of late, yeah it could be frustrating,” Pacioretty said. “But it could be worse. I could not be getting those chances. So now I’ve just got to convert on those and hopefully when one goes in they’ll start to pour in.”

Do you want to build a snowman?

Marc-Andre Fleury’s “snow wall” that he built to protect an empty net late in the third period Tuesday quickly became an internet sensation.

Marc-Andre Fleury builds a snow wall in front of the empty net before going to the bench and gets caught pic.twitter.com/OL1EjXims2

But it turns out the goaltender was fortunate not to receive a minor penalty for his ploy, or worse, have the Jets awarded a goal.

According to Rule 67.3, a goalkeeper can be penalized “when he deliberately piles up snow or obstacles at or near his net that, in the opinion of the Referee, would tend to prevent the scoring of a goal.”

Rule 67.5 states a referee can award a goal when “a goalkeeper, prior to proceeding to his players’ bench to be replaced by an extra attacker, intentionally leaves his stick or other piece of equipment, piles snow or other obstacles at or near his net that, in the opinion of the Referee, would tend to prevent the puck from entering the net.”

The Knights’ power play has been wildly inconsistent this season and currently is mired in a 1-for-30 skid dating back to Dec. 27 after failing to score on six attempts against Winnipeg on Tuesday.

But coach Gerard Gallant saw signs the Knights could be ready to break out of their slump.

“I liked the power play more (Tuesday) than I liked it in a long time,” Gallant said. “We just didn’t put the puck in the back of the net, and you’ve got to give their goalie (Laurent Brossoit) some credit. He did a good job.”

Kyle Connor’s short-handed goal in the second period on Tuesday was the first allowed by the Knights this season.

They were the last team in the league to allow a short-handed goal and are now tied with Dallas and the New York Islanders for fewest allowed.