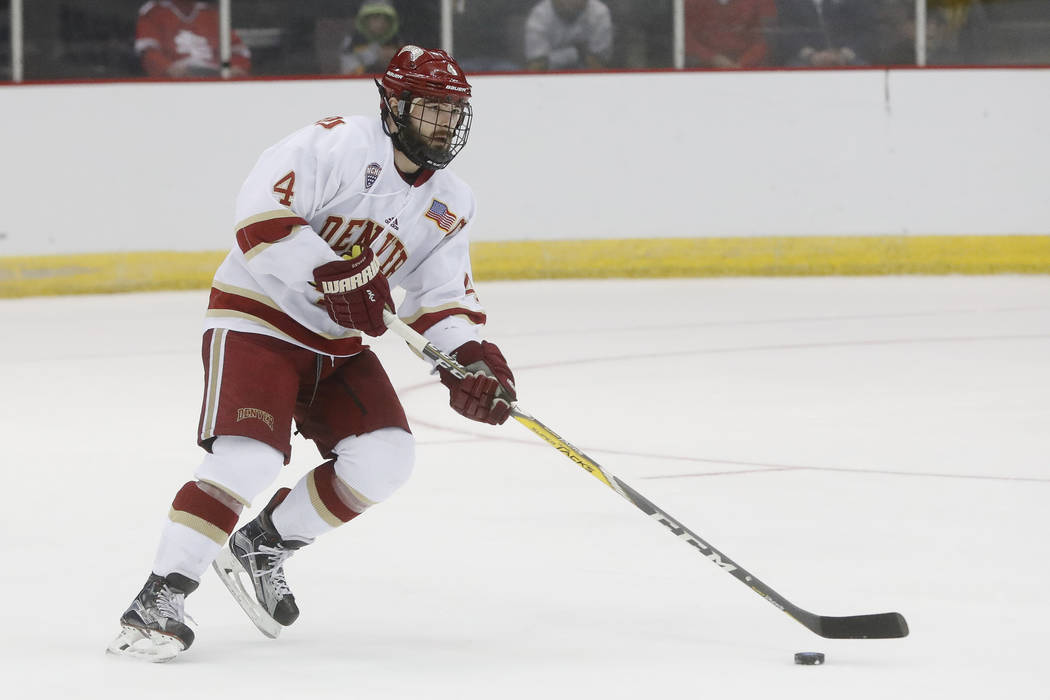 Denver's Will Butcher skates the puck up the ice during the first period in the regional semifinals of the NCAA college hockey tournament against Michigan Tech, Saturday, March 25, 2017, in Cincinnati. Denver won 5-2. (AP Photo/John Minchillo)

The Golden Knights made their pitch to free-agent defenseman Will Butcher on Tuesday.

Now it’s a waiting game for Knights general manager George McPhee, as the Hobey Baker Award winner decides where he wants to begin his NHL career.

“I would expect it would be done within a week or so,” McPhee said. “We’ve already discussed what our team has to offer and our organization has to offer him. But now a player has to take a look at facilities and understand the city a little bit to make that final decision.”

Butcher, 22, became an unrestricted free agent Aug. 16 after rejecting an offer from the Colorado Avalanche, who drafted him in the fifth round in 2013.

As a senior at the University of Denver, Butcher won the Hobey Baker as college hockey’s top player. He had 37 points in 43 games and captained the Pioneers to the national championship in April.

Butcher has narrowed his finalists to the Knights, Buffalo Sabres and New Jersey Devils, according to multiple published reports.

The Knights and other suitors are limited to offering Butcher a two-year, entry-level contract worth a maximum of $925,000 per season, plus bonuses.

Butcher’s agent, Brian Bartlett, confirmed his client’s Tuesday visit with the Knights, but declined further comment in a text message.

The Golden Knights have 12 defensemen listed on their roster, but that hasn’t deterred McPhee in his pursuit of the 5-foot-10-inch Butcher.

”He’s an offensive player. He can run a power play, plays a finesse game, and that’s the direction that the game is going more and more,” McPhee said. “You need defensemen who can think the game well and make good decisions under pressure, and he’s demonstrated he can do that.”

The Knights previously were linked with Blaine Byron, but McPhee said they are not pursuing the free-agent center out of the University of Maine.

McPhee had nothing new on the status of defenseman Nate Schmidt, who is recovering from an ankle injury suffered during offseason training on Aug. 17.

“The update is, at this point, we expect him to be ready for training camp,” McPhee said. “We’ll be careful with it.”

Schmidt is projected to be a key contributor on the blue line after signing a two-year, $4.45 million deal this month following an arbitration hearing.

Things are looking up for Knights fans hoping to watch games on cable TV.

Cox Communications announced Tuesday it has started negotiations with AT&T SportsNet Rocky Mountain to add the Knights’ TV home to its list of channels.

“We hope that we can come to an agreement that allows our customers to watch the Golden Knights, but at a reasonable cost,” said Juergen Barbusca, Cox’s manager of communications. “We know that many Las Vegas viewers are enthusiastic about the Golden Knights debut, but sports programming comes at an extremely high price …”

First-round pick Cody Glass is one of 25 prospects who will participate in the NHL Players’ Association Rookie Showcase on Monday in Toronto.

The players will be photographed by Upper Deck for use on trading cards and memorabilia.